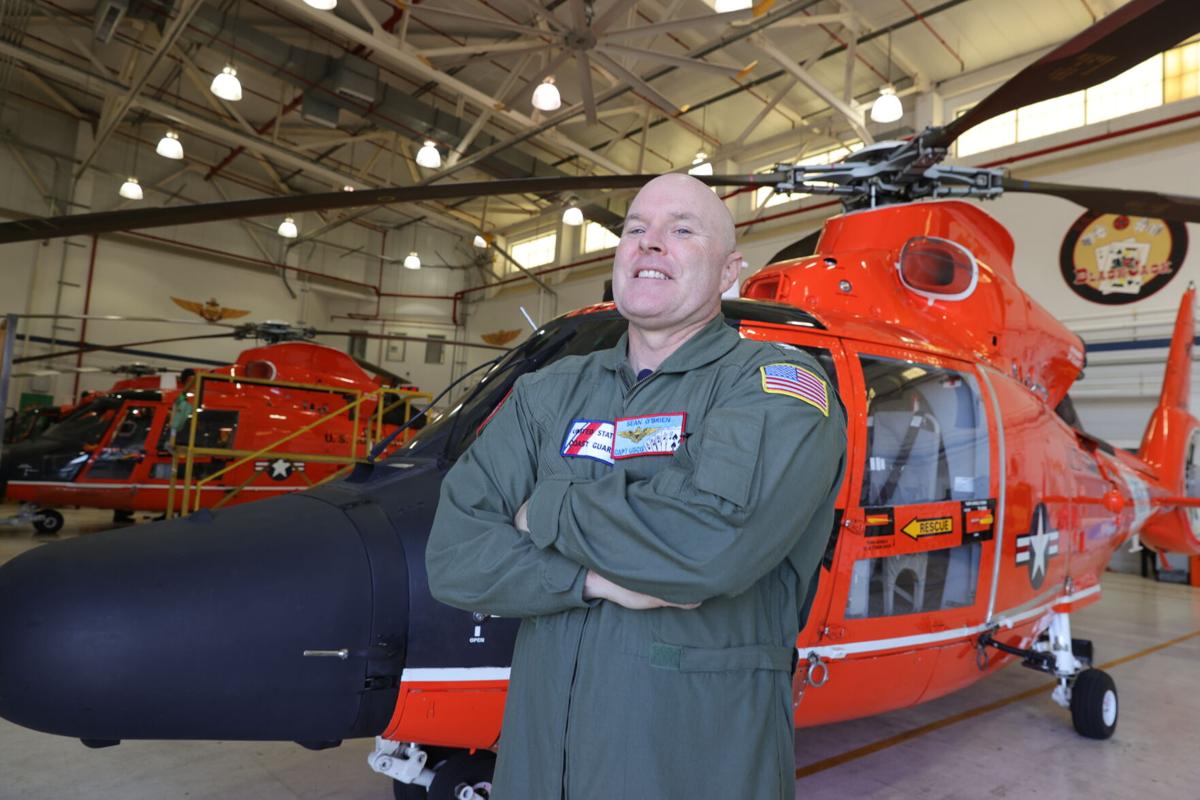 O’Brien oversees an air station that responds to rescues along the coastlines of Connecticut, New York, New Jersey, Pennsylvania, Delaware, Maryland and Virginia, as well as the interior bays and rivers of the Chesapeake, Delaware, Hudson and Long Island Sound.

Coast Guard Capt. Sean O’Brien oversees an air station that responds to rescues from Connecticut to Virginia, including Washington, D.C.

Thomas Sykes For The Press

Well, not when it comes to U.S. Coast Guard Capt. and Air Station Atlantic City Commander Sean O’Brien. This October, for an exemplary career and heroic rescues as an H-65 helicopter pilot, the Mays Landing resident was inducted into the USCG Academy’s “Wall of Gallantry” — the Coast Guard Hall of Fame.

Since graduating in 1997, O’Brien, a naval aviation “Wings of Gold” member, has been awarded two Meritorious Service Medals, three Coast Guard Commendation Medals, six Coast Guard Achievement Medals, a Commandant’s Letter of Commendation and two Air Medals — one for supreme aviation in thick fog during a fishing vessel rescue, the other in New Orleans’ Hurricane Katrina when O’Brien navigated between trees and active power lines to rescue an elderly couple from the burning rooftop of their flooded home. In Katrina alone, O’Brien rescued 224 people. His assessed career total is in the mid-300s.

After guarding the waters over Texas, Michigan and New Jersey through three hurricanes, O’Brien, 46, of Mays Landing, earned a degree from the U.S. Army War College, becoming the aviation detailer in Arlington, Virginia, nationally assigning all aviator stations. Following this, he spent one year in Saudi Arabia teaching a 6,000-member maritime security force to defend themselves from the region’s terrorist organizations.

He won’t admit it, but others will profess it for him — O’Brien is a hero.

‘Make the rescue. Trust yourself’

O’Brien recalls his first dramatic rescue — duck hunters had capsized on the Great Lakes in a blizzard, a frozen helicopter and a sinking hovercraft of firefighters to follow.

“It was snowing like crazy in the middle of the night. We couldn’t see anything. And icing on the helicopter, it doesn’t get much worse than that,” he said.

The team was fortunate to save the first responders and return home safely. Still, O’Brien lamented as he rubbed his hands over his smooth, shaved scalp: “It all worked out, but I made a lot of little mistakes during that early time period. I beat myself up a lot. I think of the kids today, they put so much stress on themselves. But as long as you own those mistakes and learn from them, it’s OK. Keep going.”

This approach is how O’Brien begins to guide a new airman into self-confidence. He describes it as advocating for empowerment through training, though he will be the first to tell you that part of the training is to cultivate instinct.

“We call it on-scene initiative,” said O’Brien, “to execute decisions on the go. We’re big on empowerment. Follow procedures until you can’t, then go outside of them and make the rescue. Trust yourself.”

O’Brien grew up in Haverford, Pennsylvania, and spent summers in Sea Isle City. He loved the ocean, so when the Coast Guard Academy offered him a spot on its college football team, he jumped at the chance to attend. There, he found his purpose.

Around the air station, where O’Brien oversees more than 200 rescue missions a year, he’s known as “The Skipper.”

It is the time outside the pilot seat, when he can be with his family of five, that he cherishes most.

“Constantly being away from family was always a challenge,” said O’Brien, “but my wife, Valerie, she’s just so impressive and supportive.”

He then gushed over his three sons — a high school athlete, a sophomore at the Coast Guard Academy and one who lives healthily with autism, skills O’Brien attributes to the quality education of the Oakcrest High School REACH program.

Today, all 260 crew members, 66 pilots and 12 helicopters of the Atlantic City Air Station are in the most competent hands. Every rescue call, the presidential detail the Atlantic City Coast Guard is alone tasked with nationwide, even protected air space in Washington, D.C., is all overseen by O’Brien.

“I just love my job. It’s a real sense of purpose.”

O’Brien loves more than his job. He loves his home. Having been a local to South Jersey since 2007, he sees his family living nowhere else.

“I really feel like a part of the community ... and professionally, we work well with local and state responders. They’re on it,” said O’Brien. “That helps particularly when dealing with nor’easters. Those storms are as nasty as anything else, especially to fly in.”

As for the Wall of Gallantry, O’Brien attributes his success to others.

“It really just goes to show it’s a team game. I couldn’t have done any of it without my crew and the great training given.”

O’Brien’s co-pilot in Katrina, Houston Air Station Capt. Commander Ryan Matson, has no doubt in O’Brien’s superior ability as a pilot and a leader.

“I was still just out of flight school,” said Matson. “O’Brien let me be more involved than he had to, and I became better prepared more quickly as a result. He’s just one of those guys that takes you under his wing.”

Now, O’Brien’s full-time job is taking people under his wing.

“It’s about instilling trust,” he said. “As long as you put your time and effort into training and you’re ready to go, go do it.”

Training and procedure prepared O’Brien for what was to come next that year of 2005 — Hurricane Katrina.

“When the levees broke, it was pure chaos,” he said. “It was really our first encounter with multiple mass rescues. We had to figure everything on the fly, just us. Most tower frequencies were down, so no one could really communicate.

“The hardest thing was keeping families together,” O’Brien said. “Even if we could rescue all at once, we’d get them to the LZ (landing zone), whether it be the Superdome or somewhere else, and it was just chaos. Someone would grab a kid, another person would grab their sibling and they’d be shuffled in all directions.”

O’Brien said their rescue swimmer axed a roof and spotted a family of eight. The mother insisted they take them all. O’Brien knew the helicopter would be over the weight limit, but there was little time for the family to have remained dry if he would have left.

Katrina would lead O’Brien to his second Air Medal.

At the end of a long day, O’Brien flew by on his last run, a 20th pass. An elderly couple watched from the roof of their flooded three-story home framed in trees and active power lines as countless helicopters passed over them, unable to finesse the grid of danger. This time, the house across the street was on fire, smoke and flames dancing in the direction of the stranded couple. The captain knew he had to do more than try. He had to get it done.

“Smoke and heat from the fire were just filling the cabin. We put the swimmer down and had to kind of swing him in between the live wires and he had to shimmy down a tree,” said O’Brien. “The smoke just kept coming, and my co-pilot started throwing up in his glove. He’d hand it to our mechanic, who’d dump it out while the co-pilot assisted me, all the while filling the other glove. It was crazy.”

After careful precision in steadying the helicopter and guiding the swimmer, the crew was able to bring the elderly couple to safety.

“We felt good about ourselves,” O’Brien said. “It was a good rescue. And the next day, we flew by and their house was burnt down. They would’ve had nowhere to go. Yeah, we were grateful for that one.”

Despite his own participation and heroic award, O’Brien could not keep from singing the praises of his crew members.

“Overall, the rescue swimmers were really brave, swimming in and out of houses underwater with people holding their breaths as they opened doors to swim out.” The commander cringed. “And after the second week, it was a hundred degrees. The water was filthy with dirt, sewage, debris and death. No visibility to say the least. It was all hazard.” He sat back in his chair with a grin. “I can say my proudest memory of my career was putting up my rescue swimmer for the Distinguished Flying Cross. He deserved more than that. The harm’s way he put himself in to save lives, he was a beast.”

"We’re big on empowerment. Follow procedures until you can’t, then go outside of them and make the rescue. Trust yourself."

WATCH NOW: What could happen with Friday night, Saturday's nor'easter in NJ?

Meteorologist Joe Martucci says it's not a question of whether or not Friday night into Saturday's storm will be rain or snow. Rather, it's wh…

EDITOR’S NOTE: The following article is from the January issue of Flavor, the Press of Atlantic City’s magazine showcasing the food and drink …

LINWOOD — Gail Rosenthal has decided it is time to enjoy more of life, plus work a little less.

Debra Ann Sadusky is buried in a cemetery near the southwest branch of Rancocas Creek in Medford, Burlington County, surrounded by the graves …

OCEAN CITY — A city man has died after he was hit by a car driven by a Philadelphia man with a suspended driver's license last week, officials…

O’Brien oversees an air station that responds to rescues along the coastlines of Connecticut, New York, New Jersey, Pennsylvania, Delaware, Maryland and Virginia, as well as the interior bays and rivers of the Chesapeake, Delaware, Hudson and Long Island Sound.

Coast Guard Capt. Sean O’Brien oversees an air station that responds to rescues from Connecticut to Virginia, including Washington, D.C.