Please support local journalism by becoming a digital subscriber or adding digital to your newspaper subscription. If you’re already a subscriber, click below to continue.

Wednesday brings largest hail to Cape May County since 2008, record rain in A.C.

What does it mean when you hear isolated, scattered storms?

How to prepare yourself for natural disasters, well before they occur

Why was South Jersey so stormy to end May? 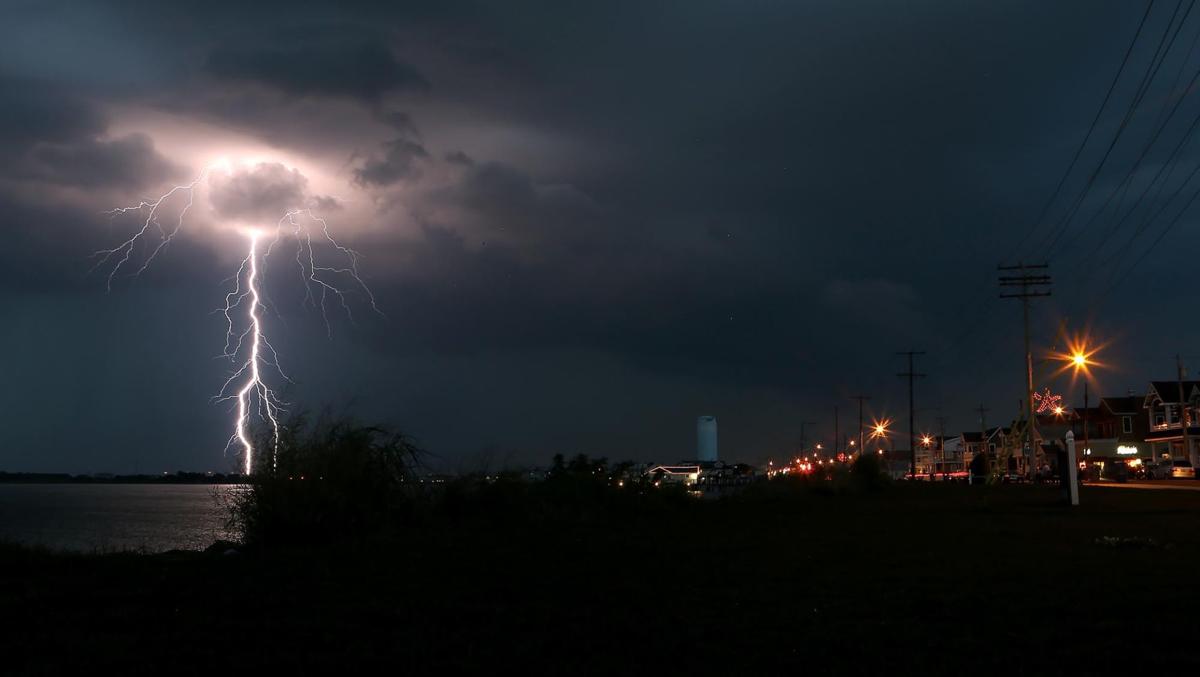 Lightning strikes over Sunset Lake in Wildwood Crest last July. The area between Vineland and Cape May experiences fewer hours of thunderstorms each year than the rest of South Jersey. 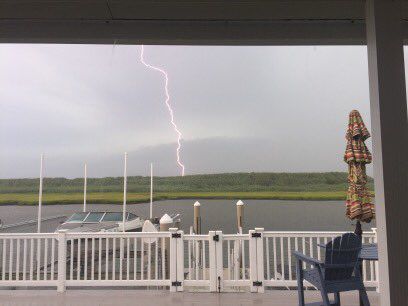 Lightning strikes over the bay in Ocean City ahead of severe storms that swept through parts of South Jersey late Friday afternoon. 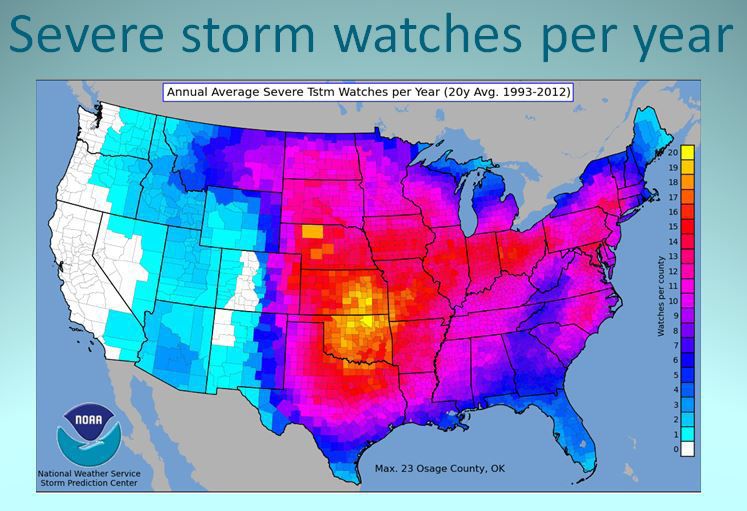 Obviously tornado alley gets the prize for most severe weather watches per year, as parts of Kansas, Missouri, Oklahoma, and Texas have the most severe weather days in an average year.  In South Jersey, about a dozen severe thunderstorm watches can be issued in a typical year, most during the summer months of June through August.

Lightning strikes over Sunset Lake in Wildwood Crest last July. The area between Vineland and Cape May experiences fewer hours of thunderstorms each year than the rest of South Jersey.

Lightning strikes over the bay in Ocean City ahead of severe storms that swept through parts of South Jersey late Friday afternoon.

Obviously tornado alley gets the prize for most severe weather watches per year, as parts of Kansas, Missouri, Oklahoma, and Texas have the most severe weather days in an average year.  In South Jersey, about a dozen severe thunderstorm watches can be issued in a typical year, most during the summer months of June through August.

How much thunder and lightning? New research shows our area experiences four to six hours of thunderstorms in a given year.

Thunderstorms are a way of life in the spring and summer, when warmer air, heated by the sun, makes its annual journey back to the area.

But first, it needs to beat out the lingering wintertime chill.

When the two air masses collide, heavy rain and lightning are born. As radar echoes go over 45 dBZ, the measure of intensity for rainfall, it is commonly accepted that a thunderstorm is occurring.

What makes a thunderstorm "severe"? Here's the criteria:

In the United States, Next-Generation Radar, or NEXRAD, tracks the skies for thunderstorms, rain, snow, hail and whatever weather phenomena come our way. The National Oceanic and Atmospheric Administration recently passed the 20-year mark of storing radar data, a critical time in the eyes of researchers.

“Once you reach 20 years, you can use data to pick out trends in how often or where thunderstorms appear,” said Frederic Fabry, director of the Radar Observatory at McGill University in Montreal. Fabry and a team of researchers from across the United States and Canada were inspired to see what could be unearthed from all the saved radar data.

They analyzed the U.S. to see how often and when thunderstorms occurred.

Where do they occur?

Most of South Jersey experiences six hours’ worth of thunderstorms per year, Fabry said. The area between Vineland and Cape May experiences four hours.

By comparison, in eastern Kansas and Oklahoma, the heart of Tornado Alley, any one spot can expect to see 13 hours of thunderstorm-intensity rainfall a year.

As to why extreme southern New Jersey experiences fewer thunderstorms, Fabry said, Cape May and eastern Cumberland counties are heavily influenced by the Delaware Bay. During the spring and summer, the bay is cooler than the land. If storms pass west to east, as they typically do, the bay will help stabilize the storms, weakening them to below the 45 dBZ threshold.

When it comes to severe thunderstorms, it's not the lightning that is the most dangerous haz…

When do they happen most often?

Typically, the heavy rain and ferocity of a thunderstorm happens during the evening rush or while we eat dinner.

The peak thunderstorm time in New Jersey is between 5 and 7 p.m. Along the shore, from Atlantic City to Toms River, it is a bit earlier. South of Atlantic City, down to Cape May, it is later, Fabry’s research shows.

There are theories as to why.

“In the case of Atlantic City to Toms River, the sea-breeze tends to develop thunderstorms earlier because east winds meet west winds earlier, due to how the land is positioned,” Fabry said.

David Robinson, the New Jersey state climatologist, agreed the orientation of the land plays a role.

The difference is small but matters. Robinson believes Atlantic City on north has a more effective sea breeze. This increases the airflow around the region (and cools down the shore). As a result, it could create more thunderstorms.

However, this all pertains just to spring and summer. During the fall and winter, “thunderstorms do not pay attention to the clock,” Robinson said jokingly.

That’s because fall and winter thunderstorms are driven by large-scale events, whereas the heavy rain and booming thunder of the spring and summer are driven by daytime heating, which peaks between 5 and 7 p.m.

Here are the five ways you can be struck by lightning

It is not always possible to know exactly how a victim has been struck, but here is a list o…

In what is welcome news for beachgoers, businesses and shops, Fabry and his team also found that rain falls 5 percent to 10 percent less in New Jersey between Saturday and Monday.

According to Fabry, “We thought that less pollution from industry on the weekend would be the reason for this. We got excited. Everything would seem to point to that, but the data tells us that it is a fluke.”

Thunderstorms by time of day

Tax rate up slightly in $152.5M Cape May County budget

CAPE MAY COURT HOUSE — The Cape May County Board of Freeholders unanimously approved a $152.5 million budget for 2018.

ATLANTIC CITY — Amid growing concerns about how best to address opioid and heroin abuse, as well as improve the perception of the resort’s Tou…

We will go from winter to spring quickly Tuesday into Wednesday. A low-pressure system will bring a warm front, and then a cold front. Showers…

A wind advisory is in effect and the Storm Prediction Center has put South Jerey under a marginal risk for severe weather on Wednesday.

Update: A single thunderstorm make a right turn from Maryland and went into South Jersey. Winds up to 40 mph are possible with this storm as i…

2:55 p.m. UPDATE: The severe thunderstorm warning has been cancelled by the National Weather Service. However, heavy rain will continue into t…

Does the 'Cape May Bubble' really exist?

New Jersey's weather the most stormy in recent memory

I’ve heard it from readers and viewers all across the state.

What Conditions Do Orthotics Correct?

CAPE MAY COUNTY DEPARTMENT OF TOURISM