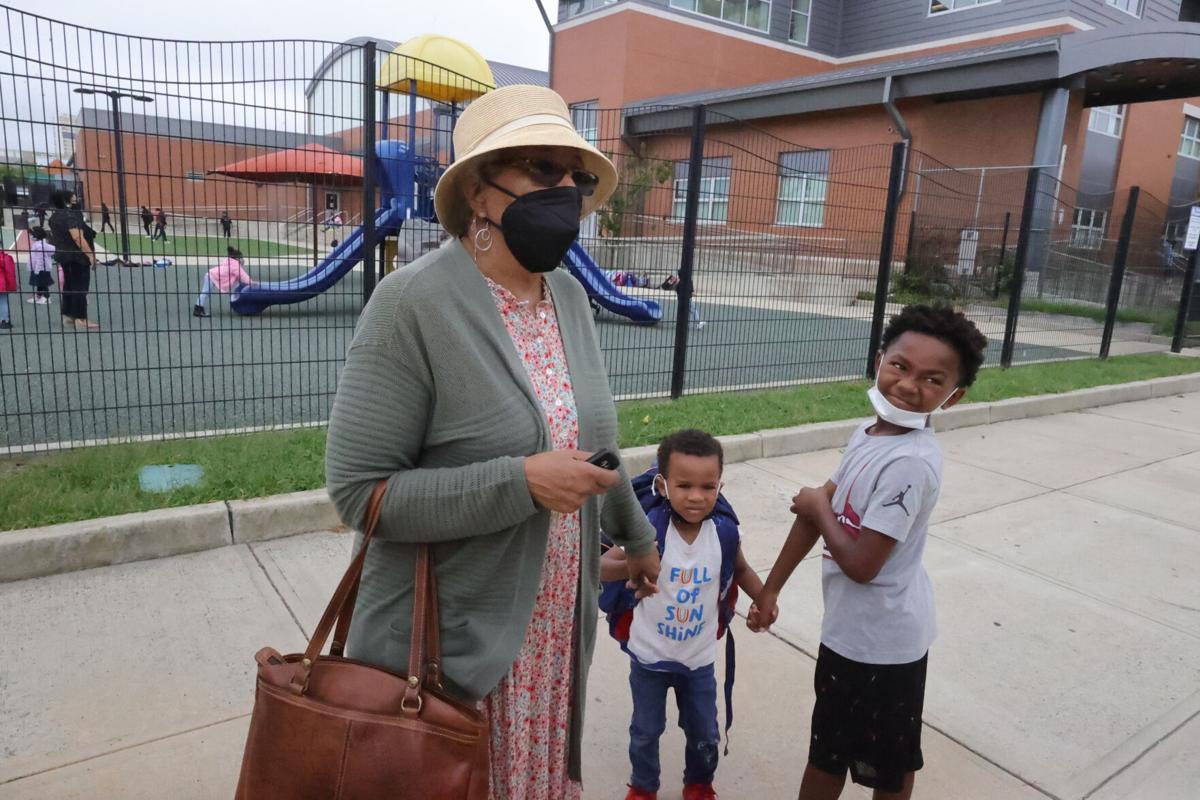 Miriam Spellman, of Atlantic City, discusses the risk of flooding to the Pennsylvania Avenue School while picking up her great grandchildren William, 3, and Asa, 8. 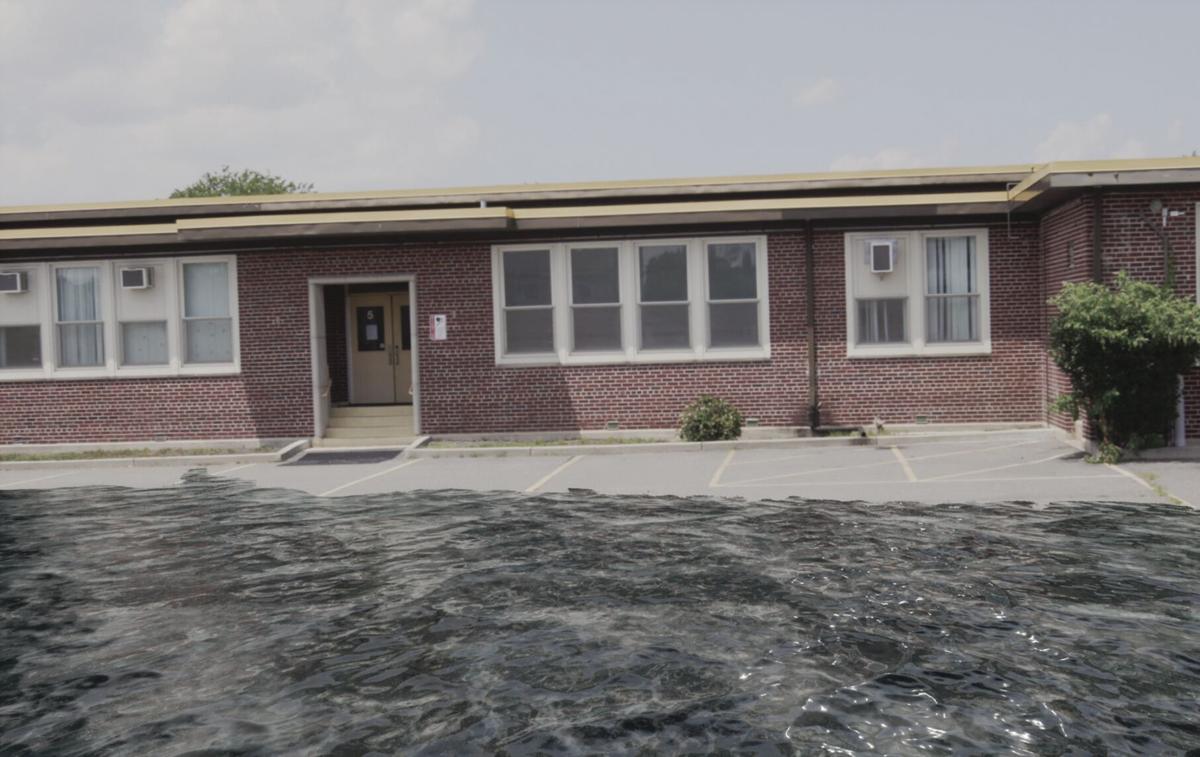 A computer-generated image shows the forecast risk of flooding to the Chelsea Heights School in 2050.

ATLANTIC CITY — Paula Rudolph Stryker drives her grandson to the Brighton Avenue School almost every day. While the drive involves the usual bouts of slowdowns with traffic lights and rush-hour congestion, one thing has slowed her more often in recent years.

“I’ve found more problems with the flooding. ... There have been a couple of times when we’ve had a delayed opening because of the flooding,” said Stryker, 63.

As seas rise at a quickening pace, the water continues to creep closer to where the city’s students spend most of their days — in its 11 public schools.

Warming trends are aggravating threats to student health and threatening reliable access to classrooms nationwide, with the resort a poster child for flood impacts. As the effects of generations of federal underspending on infrastructure and schools trigger complaints and debate from Route 40 to Washington, D.C., experts warn that few American classrooms are ready for climate change.

“Long before this pandemic, our schools were all in dire need of repair,” U.S. Rep. Donald Norcross, D-1st, said in a statement in January after introducing a bill that would provide $130 billion for schools, targeted at those most in need. While that stalled as a standalone bill, House Democrats’ Build Back Better Act includes $82 billion for repairing and modernizing public school infrastructure.

Here, the impacts from worsening flooding occur around the school properties. And in a district of just 4 square miles where only the high school has busing, the city’s youth and their caretakers are increasingly forced to wade through and drive around floodwaters as part of their routines.

The impacts from sea level rise affect almost every facet of life here, from the economy to culture and physical landscape. To better understand how the sea continues to shape the resort, The Press of Atlantic City and Climate Central have spent much of 2021 examining the challenges, strategies and opportunities as the city deals with increasing flood risks.

ATLANTIC CITY — Whether it’s a nor’easter, tropical system or even a full moon with an east …

From 1993 to 2017, sea levels rose 1.9 inches per decade along the Jersey Shore, according to the Rutgers University Scientific and Technical Advisory Panel. The same study forecasts an 83% chance of an additional 11 inches of sea level rise by 2050.

Three of the city’s schools are in locations that make them prone to experiencing coastal flooding at least once a year on average, according to an analysis by Climate Central, a nonprofit group of scientists and journalists in Princeton, Mercer County.

Another four have annual flooding somewhere on the school grounds, such as a parking lot or sports field. By 2050, that number will increase to 10 unless infrastructure is built to protect them from tidal flooding. The only exception is Atlantic City High School, which is a little less than a mile north of Absecon Island, on Great Island, due to its higher elevation. However, the sports fields on the western edge of the school property will face annual flood risk by then.

The Brighton Avenue School, where Stryker drops off her grandson, is one of the few that does not face an annual flood risk. However, by 2030, the lowest-lying parts of the school are expected to flood at least once a year and, by 2050, water will reach the steps at the entrances at the corners of Morris and Arctic avenues at least once a year on average. Reaching the school at those times will be a challenge, with those streets also covered by briny floodwaters.

The effects of heat-trapping pollution also are hitting American students particularly hard in their schools, many of which require upgrades or repairs. New Jersey has been the fastest warming state in the nation in the past 20 years when compared to the 20th century, according to FilterKing, which used data from the National Oceanic and Atmospheric Administration. Americans underspend on school maintenance and repairs by $46 billion a year, according to the 2016 “State of Our Schools” report co-produced by the 21st Century School Fund, the National Council on School Facilities and the U.S. Green Building Council.

“Schools are vulnerable to a lot of the climate impacts that we expect, particularly those in coastal zones,” said Perry Sheffield, a pediatrician and researcher at the Icahn School of Medicine at Mount Sinai in New York City. She said those impacts are associated with “a longstanding neglect of environmental health” on school grounds.

The Press contacted principals of the most severely affected Atlantic City schools, but none returned requests for comment. Barry Caldwell, superintendent of the Atlantic City School District, in a text reply said preparing schools for future flooding challenges is on the district’s radar and that a meeting has been set with city officials for Thursday to discuss the issue.

Hurricanes and rainstorms are intensifying and seas are rising, bringing risks of mold alongside flood damage. Sheffield said flooding and fear of climate change can also affect the mental health of students.

Rising temperatures are worsening hazards for student athletes and can make it more difficult to concentrate and learn.

“There’s going to be an emerging literature — there’s some, but not a lot yet — on things like learning impacts and test scores, which affect graduation rates, which we know are directly related to overall life earning and well-being,” Sheffield said.

Some congressional Democrats have been pushing for an infusion of spending on America’s public schools following the upheaval wrought by COVID-19, which illuminated and exacerbated impacts of entrenched economic inequality. The average school building in the United States is more than 50 years old, with federal figures showing half of them require repairs.

On a recent cloudy, breezy Friday afternoon, students who attend the Pennsylvania Avenue School hung out on the playground. As kids giggled and yelled, parents patiently waited outside the school. The parents agreed they would take the clouds and breeze over the chance of coastal flooding any day.

“I don’t drive, and where I live, it floods really badly,” said Evelyn Coulbourne, 24, whose 9-year-old son, Anthony, attends the school. She said she has to pack extra shoes for Anthony if they walk to school during a flood. “I try to get a ride when it floods, but that’s not possible because everyone else works.”

The Pennsylvania Avenue School is one of the newest public schools in Atlantic City, finished in 2012, when the concerns for increasing tidal flooding were well known. Still, most points on the property are at risk of at least one flood a year, with the entrance near Virginia Avenue facing potential flooding as many as eight times in a typical year. By 2050, some parts of the school property will likely flood more than 10 times a year, the analysis showed.

Councilman Jesse Kurtz, whose 6th Ward covers the Richmond Avenue School, Chelsea Heights School and Atlantic City High School, said schools have to be built with the possibility of coastal flooding in mind.

“I’d like to see the ‘get it done right the first time’ mentality. ... If you’re near water, that type of infrastructure should fit into the initial infrastructure,” Kurtz said.

5 key takeaways from the new UN report on climate change

This story was produced in collaboration with Climate Central, a nonadvocacy science and news group, as part of a yearlong partnership examining sea level rise and climate change's impact on Atlantic City.

Atlantic City residents talk about their flooding concerns in a video at PressofAC.com.

WATCH NOW: What A.C. residents say about coastal flooding and the school system

7 of Atlantic City's 11 public school tidal flooding on their property at least once a year, according to an analysis by the New Jersey based …

If October has you thinking about flocking to Florida, I have the day for you. Sunday will be a good beach day with 80s all around. Monday should be balmy as well but a long duration of showers, storms and even some coastal flooding will arrive.

If there was something on which all six local legislative candidates could agree Wednesday night, it was how to better access and enjoy Atlant…

7 of Atlantic City's 11 public schools flood once a year, here's what locals say

7 of Atlantic City's 11 public schools tidal flooding on their property at least once a year, according to an analysis by the New Jersey-based…

Miriam Spellman, of Atlantic City, discusses the risk of flooding to the Pennsylvania Avenue School while picking up her great grandchildren William, 3, and Asa, 8. 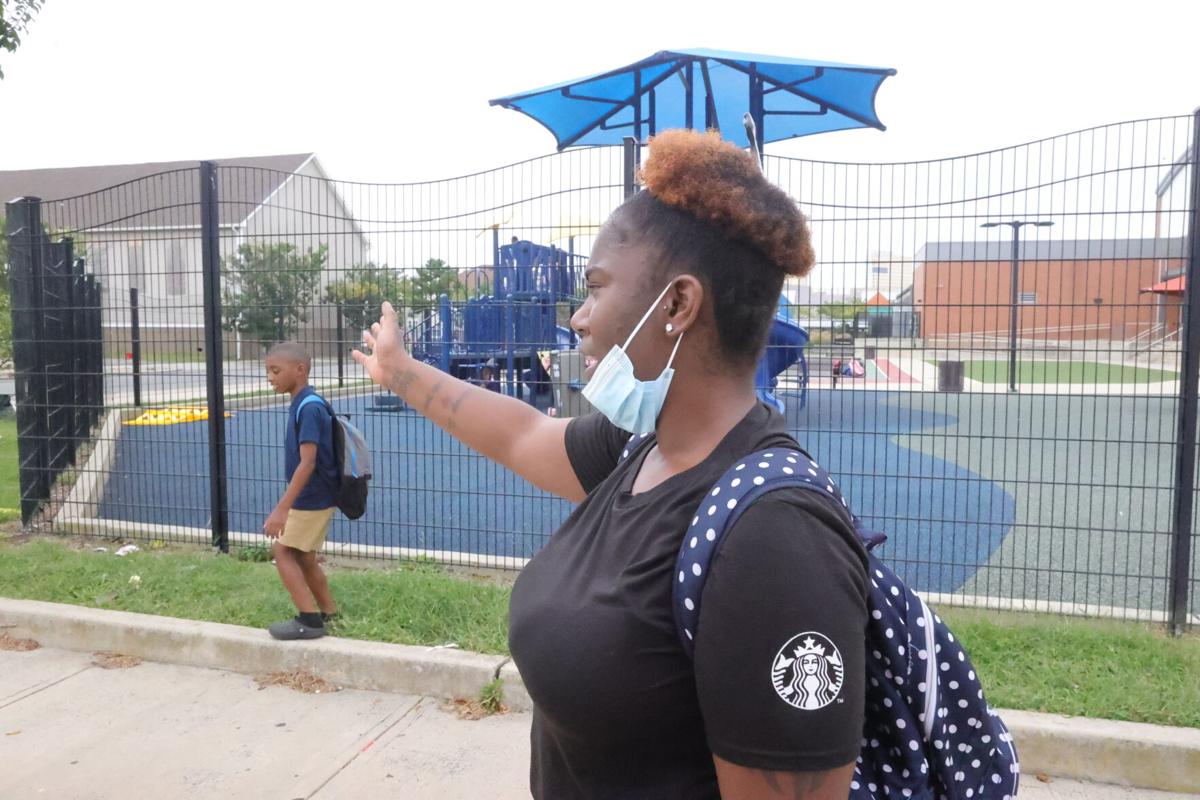 Evelyn Coulbourne, 24, says flooding occasionally makes it difficult for her to get her son Anthony, 9, to the Pennsylvania Avenue School. “I try to get a ride when it floods, but that’s not possible because everyone else works,” Coulbourne said.

A computer-generated image shows the forecast risk of flooding to the Chelsea Heights School in 2050.