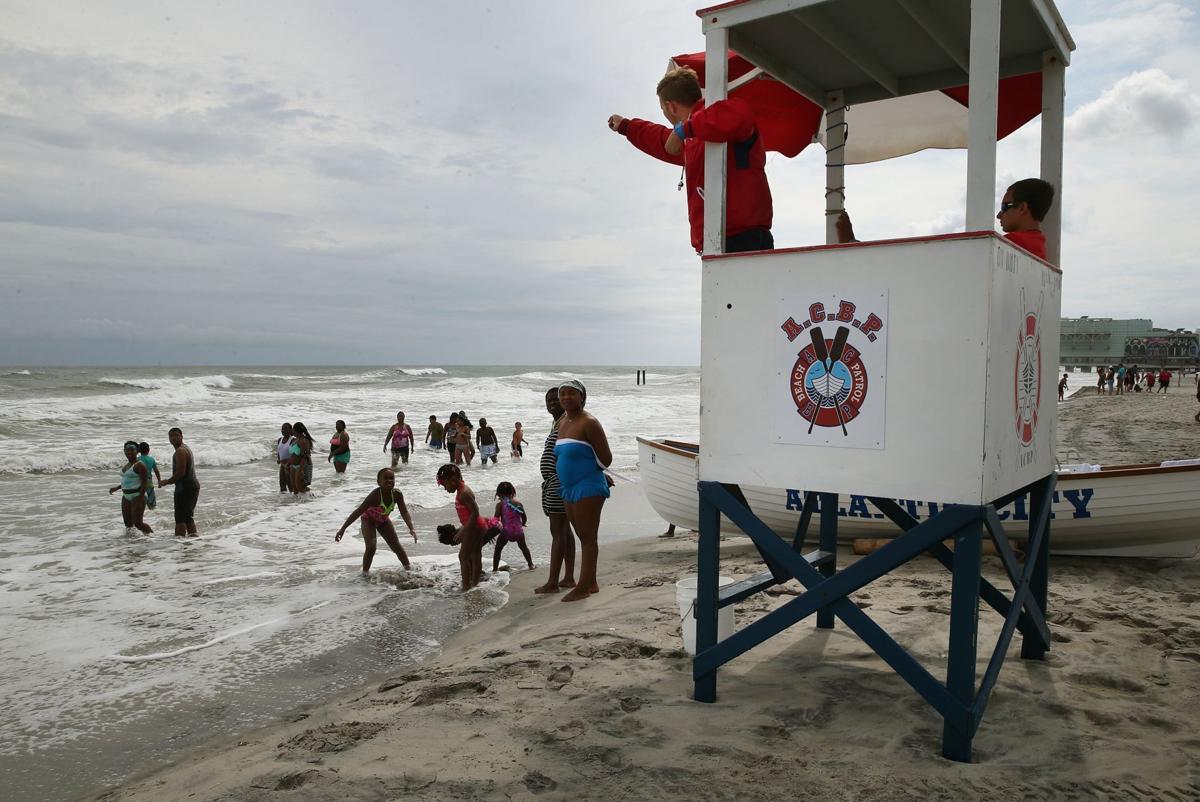 Atlantic City Lifeguard Steve Brown of Margate directs swimmers from the lifeguard stand at the Kentucky Avenue beach in Atlantic City as a high rip current watch is in effect today and tomorrow, Friday August 7 2015. (The Press of Atlantic City / Ben Fogletto) 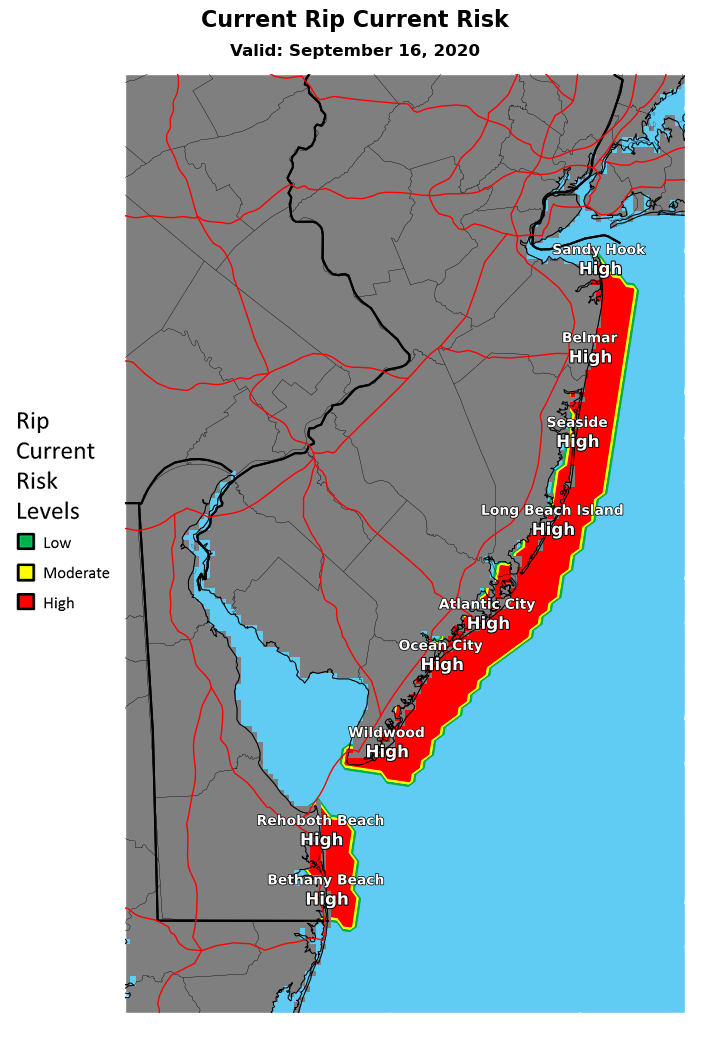 Paulette continues to move further and further away from New Jersey, but it continues to bring dangerous rip currents to the waters Wednesday.

The National Weather Service in Mount Holly issued a high risk for rip currents again Wednesday. A rip current statement is in effect until midnight Thursday to account for highlight the risk, something the NWS has done every day this week.

Paulette lost its tropical characteristics Wednesday morning, but is still packing a punch, with maximum sustained winds of 100 mph. Even though the storm is roughly 1300 miles to the east-northeast of Atlantic City, the scope of the storm is still bringing swells to the shore, making it unsafe to be in the water

Rip currents are most likely when: waves are at least 2 feet high, wave intervals measured at the buoys, are 8 seconds or slower, and winds that are perpendicular to the land.

This is when rip currents are most deadly to you

The shore checks all the boxes Wednesday. Waves in the surf zone will break around 4 Wednesday. Wave intervals will be 10 seconds. Swells will come from both the east, directly perpendicular to the land for Long Beach Island and partially so for the rest of the shore.

Rip currents are caused by breaks in the sandbar, can make swimming dangerous and require numerous lifeguard rescues during the summer. Through August 31, one person died from a rip current in New Jersey, happening in Atlantic City on July 9. 34 people have passed away throughout the United States.

The most recent, Aug. 5, Atlantic Hurricane season update from Colorado State University (CSU) forecasts in total tropical activity take a large step up, enough to make the 2020 hurricane season the second most active on record.

As of Aug. 5, nine named storms have formed in the Atlantic Hurricane basin, which includes the Gulf of Mexico. That is on pace to break the record, last set in 2005. Given this, CSU forecasts 24, named tropical storms or hurricanes to occur. That is an increase from the 20 last predicted in the July update. Out of the 24, 12 hurricanes and 5 major, category 3 or greater (at least 111 mph sustained winds) are forecasted.

In July, the number of forecasted hurricanes and major hurricanes were 19 and 9, respectively.

"We have increased our forecast and now call for an extremely active 2020 Atlantic hurricane season" the CSU report read, which is led by Philip J. Klotzbach, Michael M. Bell, and Jhordanna Jones.

There still remains an above average risk of a major hurricane making landfall on the East Coast of the United States, including the Florida Peninsula. The 49% chance is an increase from 45% in the July update. On average, there has been a 31% probability of a strike in the last century.

CSU attributes warmer than average waters in the subtropical Atlantic Ocean, slightly warmer than average waters in the tropical Atlantic as reasons for the active forecast. Furthermore, there's a lack of wind shear, or change of winds with height, which can rip storms apart. A transition from the current El Nino Southern Oscillation (ENSO) neutral state to a La Nina late in the summer puts more confidence that wind shear will remain light.

Tropical cyclone names rotate every six years. Exceptionally notable hurricane names, such as Sandy, become retired by the World Meteorological Organization. However, no names were retired in 2014, meaning 2020 will have the same list as then.

It's the sixth year in a row that a named tropical system has developed in the Atlantic Hurricane Basin before the June 1 official start.

Even though the official start to the Atlantic Ocean hurricane season is June 1, May has not…

Dolly was the third earliest fourth named (D storm) storm in Atlantic Hurricane history, which goes back to 1851. It also flared up further north than any tropical storm before July 1 in recorded history, according to Sam Lilo, postdoctoral researcher at the National Oceanic and Atmospheric Administration

The Atlantic Hurricane season continued its blistering pace. Edouard, which developed July 6, was the earliest fifth named (with the letter "E") storm in Atlantic Hurricane history, which goes back to 1851. This is according to Philip Klotzbach, Meteorologist at Colorado State University, who issues a highly reputable hurricane forecast each year and is used by The Press.

#Edouard has formed in the far North Atlantic - the earliest 5th Atlantic named storm on record. Previous record was Emily in 2005 on July 12 at 0 UTC. #hurricane pic.twitter.com/K7cB6UKUnq

The previous record was held in 2005 with Emily, which occurred on July 12. 2005 holds the record for the most active hurricane season on record in the Atlantic Hurricane basin, with 27 named storms.

However, all of the storms to this point have all been tropical storms. Some, like Edouard, likely would not have even been noticed before the satellite era, as they were out to sea and may have been missed by shipping routes.

Tropical Storm Fay will go in the record books for multiple reasons.

- It is the tenth tropical storm or hurricane to make landfall in New Jersey since 1900.

- It made landfall just south of Holgate, on Long Beach Island, this is, incredibly, about ten miles away from where Tropical Storm Irene and Superstorm Sandy made landfall, right near Brigantine.

Tropical Storm Gonzalo formed as a tropical depression July 21 and turned into a named storm July 22.

Tropical Storm Hanna formed Thursday, July 24. That put the 2020 hurricane season in a big lead over the 2005 hurricane season for the quickest, most active start. In 2005, Harvey formed on August 3, putting the 2020 season roughly two weeks ahead of 2005.

According to Retired National Weather Service Meteorologist Jim Eberwine, this was the first time in 22 that there have been eight tropical storms, without any hurricanes. However, its upgrade to a hurricane July 25 meant this streak was broken.

#Hanna has formed in the Gulf of Mexico - the earliest 8th Atlantic named storm formation on record. Prior record was Harvey on August 3, 2005. #hurricane pic.twitter.com/m1cuFjb0ff

The fourth largest power outage event in Atlantic City Electric's history came with Isaias, which passed to the west of New Jersey as a tropical storm.

Isaias continues the blistering pace of the hurricane season, beating out the 2005 season. The "I" storm then, Irene, developed on August 7.

Hurricane Irene would be retired by the World Meteorological Organization in 2011. The storm brought power outages to over 100,000 in South Jersey, a tornado in Vineland and nearly a foot of rain to the Wildwoods.

This also ties the record for the most number of July tropical systems in a month, at five.

Tropical Storm Josephine formed Aug. 13, after spending time as a Tropical Depression for a couple of days. According to Klotzbach, this is the earliest tenth named storm of the Atlantic Hurricane season on record, best 2005 by nine days.

#Josephine has formed in the central tropical Atlantic - the earliest Atlantic 10th Atlantic named storm on record. Prior record was Jose on August 22, 2005. #hurricane pic.twitter.com/v9tdJ0wpmS

Low pressure area south of Nantucket now has 70% chance of tropical cyclone development in next 2 days. If it gets named, it would be Kyle. Current record for earliest ‘K’ storm is Katrina on August 24, 2005. #hurricane pic.twitter.com/pLn5OycAjK

According to Klotzbach, Laura is the earlier "L" storm on record, beating out Luis in 1995.

Laura is forecasted to make landfall on the Gulf Coast Wednesday, doing so at nearly the same time as what will be Marco.

The previous record for the earliest thirteenth storm of the year was Sept. 2.

#Marco has formed in the NW Caribbean - the earliest 13th Atlantic named storm formation on record. Prior record was a tie on September 2 at 12 UTC between Maria (2005) and Lee (2011). #hurricane pic.twitter.com/bDHFT123dZ

Tropical Storm Omar formed off the North Carolina coast on Sept. 1. 2020 continues to lap other hurricane seasons for the most active on record. According to Klotzbach, the second earlier "O" (fifthteen) named storm was Ophelia on Sept. 7, 2005.

Tropical Storm #Omar has formed off of the North Carolina coast - the 15th named storm of the 2020 Atlantic #hurricane season to date. The previous record for earliest 15th Atlantic named storm formation was Ophelia on September 7, 2005 at 6UTC. pic.twitter.com/YHEizBrdzN

Paulette's eye went right over Bermuda as a hurricane, though little damage was seen on the resilient island.

Tropical Storm Rene formed off the coast of Africa on September 7. According to Klotzbach, this outpaces the 2005 Atlantic Hurricane Season for the most active on record. Rita formed on September 18.

#Rene has formed in the eastern tropical Atlantic - the 17th named storm of the 2020 Atlantic #hurricane season to date. Rene is the earliest forming 17th Atlantic named storm on record, breaking old record set by Rita on September 18, 2005. pic.twitter.com/5gKXDXdoOE

Teddy formed on Sept. 14, 2020. The blistering pace of the Atlantic Hurricane season continues, beating out the 2005's nineteenth named storm by nearly two and a half weeks.

#Teddy has formed in the central tropical Atlantic - the earliest 19th Atlantic named storm formation on record. Prior record was October 4, 2005 (Unnamed). Unnamed storm was added in post-season reanalysis in 2005. #hurricane pic.twitter.com/SAnhkoHKs5

Wilfred exhausts the list of hurricane names for the Tropical Atlantic Ocean. It is in the earliest twenty-first storm on record, beating out 2005's storm, which formed on Oct. 8.

What if we get past Wilfred?

The rules for hurricane names state that once the list is exhausted, storm names go by Greek letter of the alphabet. This has only been used once, and that was for the 2005 Atlantic Hurricane season that 2020 is on pace to break.

The next five storm names after Wilfred go in the following order:

For storms that cause massive destruction, any member state of the World Meteorological Organization can ask to retire the name. The WMO Hurricane Committee then votes on it. Member states can apply to have a greek alphabet name retired in 2020. If the WMO approved it, the name will go into the "retired" list, but still be used whenever needed.

For the second time in history and the first time since 2005 the list of storm names have been exhausted.

Subtropical storm Alpha is the first Greek storm name of the season. Perhaps fitting for its name, it has charted its own path, crashing into Portugal as a mid-level stom Sept. 18.

To quote Aerosmith, “it’s the same old story, same old song and dance, my friend” for Wednesday’s weather. That will mean comfortable temperat…