KENOSHA, Wis. — President Donald Trump met with law enforcement Tuesday and toured the damage caused by a week of protest following the police shooting of Jacob Blake, despite concerns by some state and local officials that such a visit would exacerbate divisions in this southeast Wisconsin community.

During a visit to Bradford High School, about three miles from where a gunman killed two protesters Tuesday night, Trump praised the Wisconsin National Guard's response to protests as part of the president's call for "law and order" to address civil unrest in cities across the nation.

"This is going to heal very quickly," Trump said in regard to the damage caused by protests in Kenosha. "Some people think those are two terrible words — law and order — and they’re not terrible at all, they’re beautiful.”

Trump also claimed credit for quelling violence that damaged or destroyed more than two dozen buildings last week but mischaracterized how the National Guard was deployed and who authorized the deployment.

“Once (Gov. Tony Evers) responded and once we took control of it, things went really well," Trump said during a roundtable discussion with state and local officials.

Trump reiterated late Monday his plan to visit Kenosha amid heightened tensions and a week of protests over Blake's shooting.

The Wisconsin National Guard's deployment began last week on Monday when Gov. Tony Evers authorized 125 Guard members to Kenosha in response to the community's request. Evers doubled that number, while also rejecting Trump's offer of support from the Department of Homeland Security, on Tuesday.

That night two protesters were shot and killed and a third wounded allegedly by a 17-year-old from Illinois who had traveled to the city to protect buildings alongside other armed counterprotesters.

The number of Guard members grew steadily over the course of the week to at least 750 members by last Thursday.

Authorities said they had more than 1,500 National Guard members deployed in the community and Kenosha County Sheriff David Beth said more than 200 people have been arrested since the protests began.

The Guard has not been federalized and remains under the command of Evers and the Guard's Maj. Gen. Paul Knapp, according to Evers' office. Federal assistance has consisted of FBI and U.S. Marshals Service support. The Wisconsin National Guard also has been in communications with the federal government and other states for additional support.

Trump's visit was billed by White House officials as an effort to unify a city that has been a hotbed of civil unrest and protest since the police shooting of Jacob Blake, a 29-year-old Black man, on Aug. 23. While in Kenosha, Trump praised the actions of area law enforcement to quell violent protests, while also lobbing criticism at "violent mobs" of protesters, the media and "Democrat-run cities."

Trump met with local law enforcement and toured damaged businesses on Tuesday, but did not meet with Blake or his family. White House officials said Monday the president was unable to connect with Blake's family.

“Some people thought it would be a good thing for me to come, a bad thing, I just wanted to come," Trump said. "I really came today to thank law enforcement."

In photos: Stunning scenes of Uptown damage in Kenosha 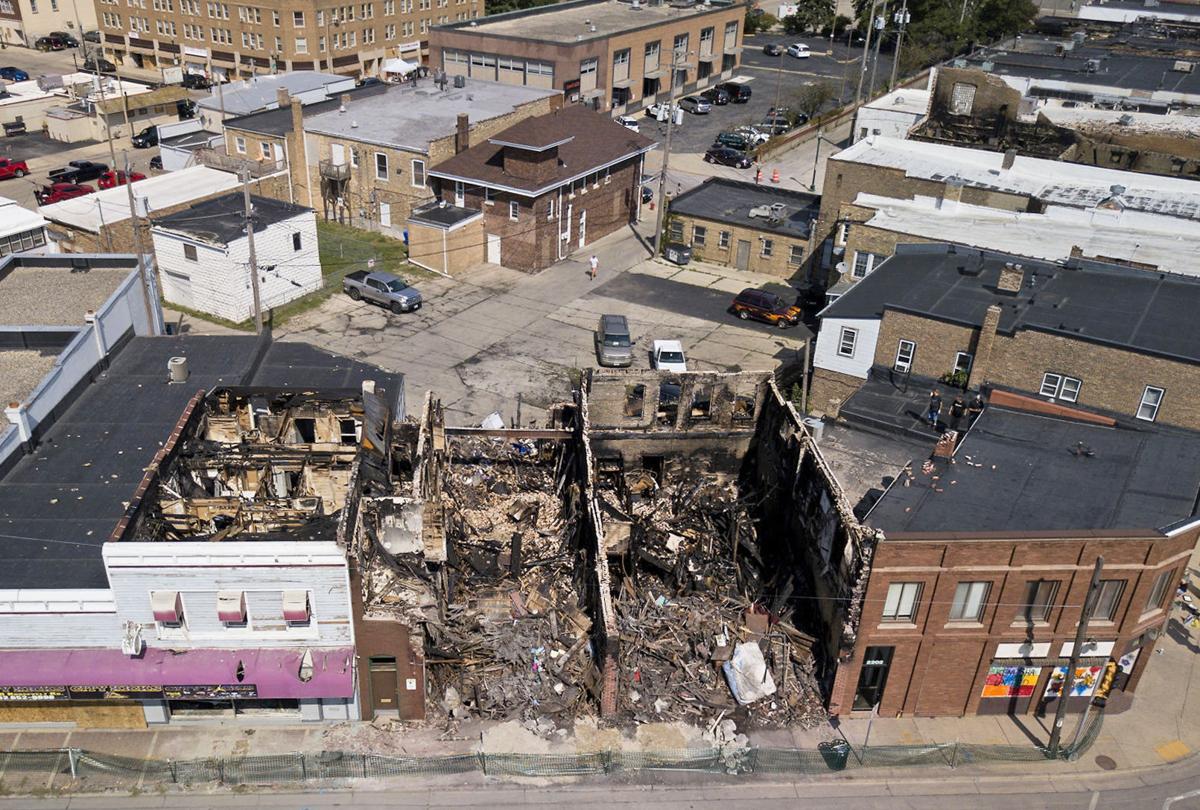 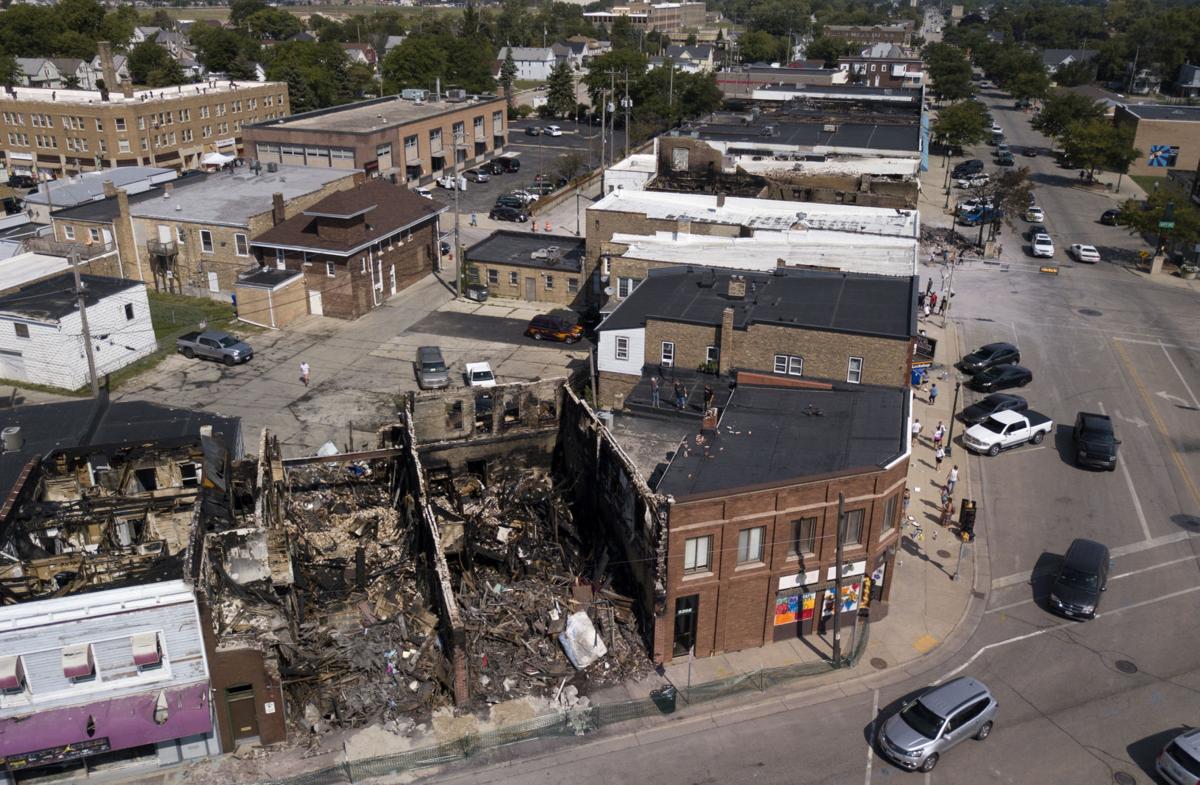 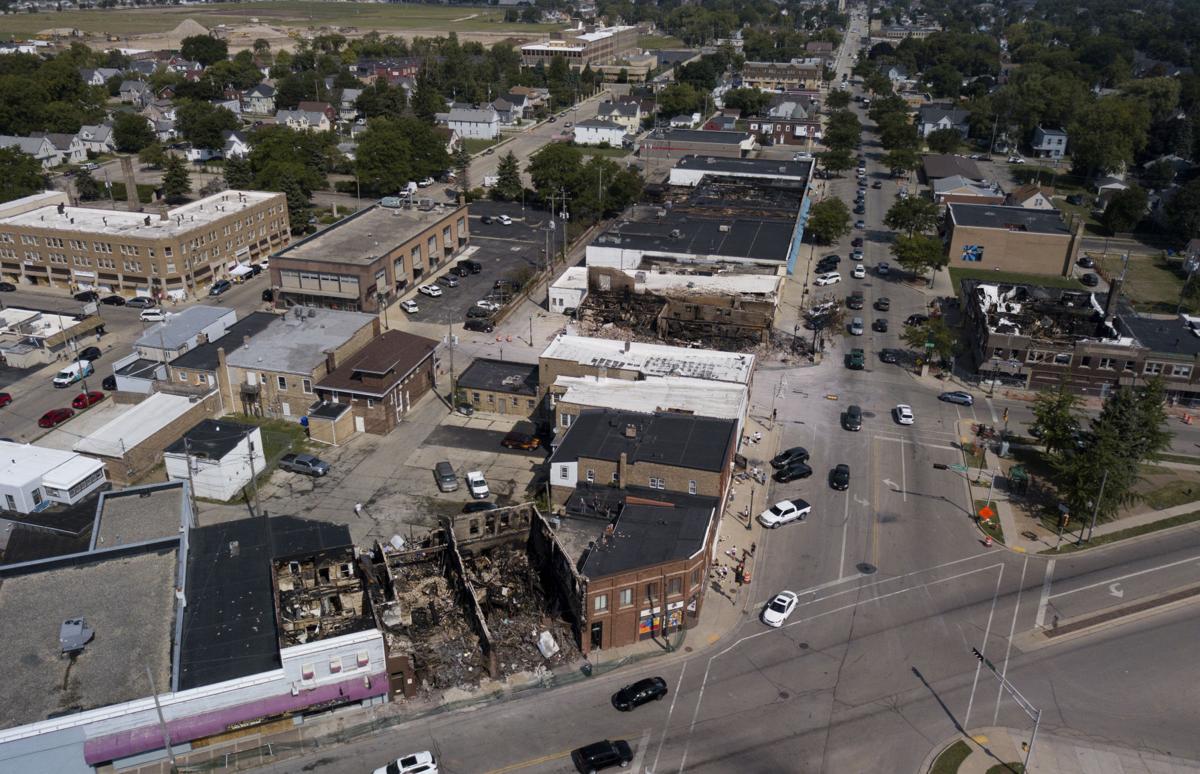 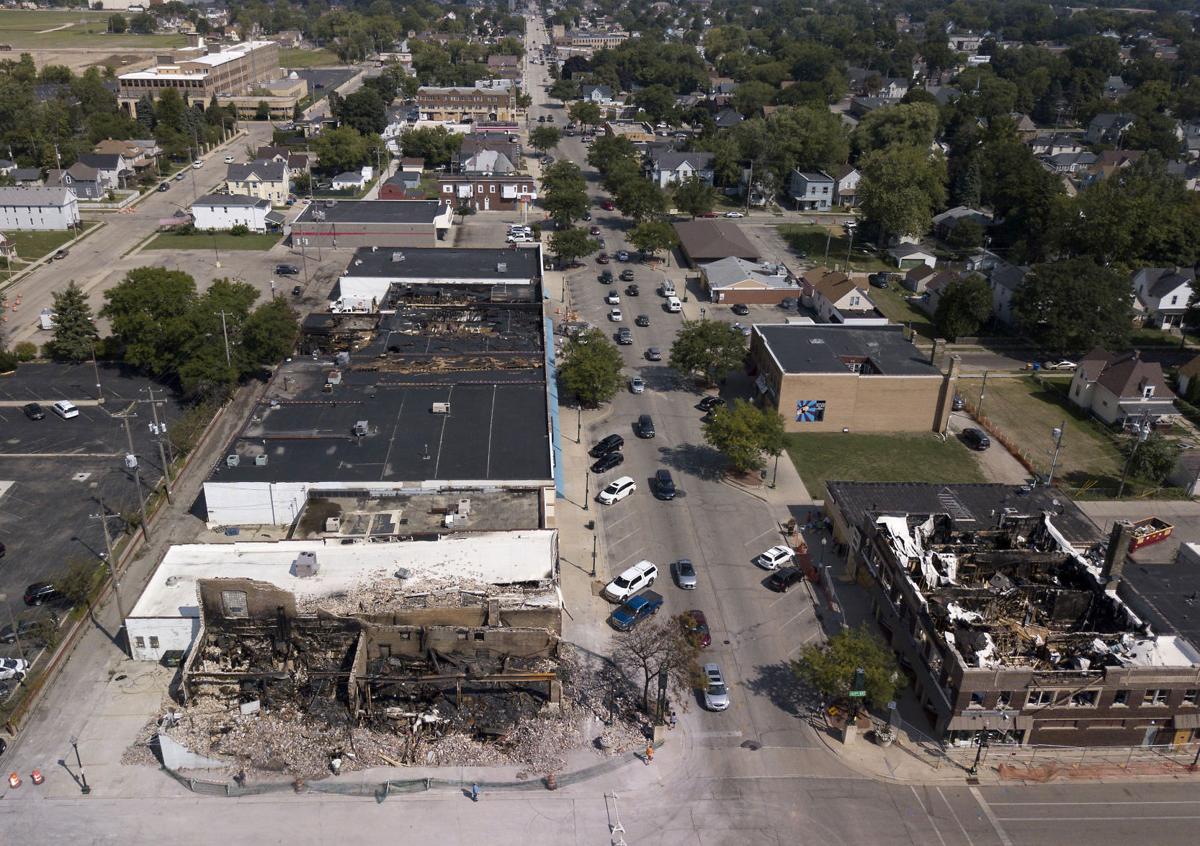 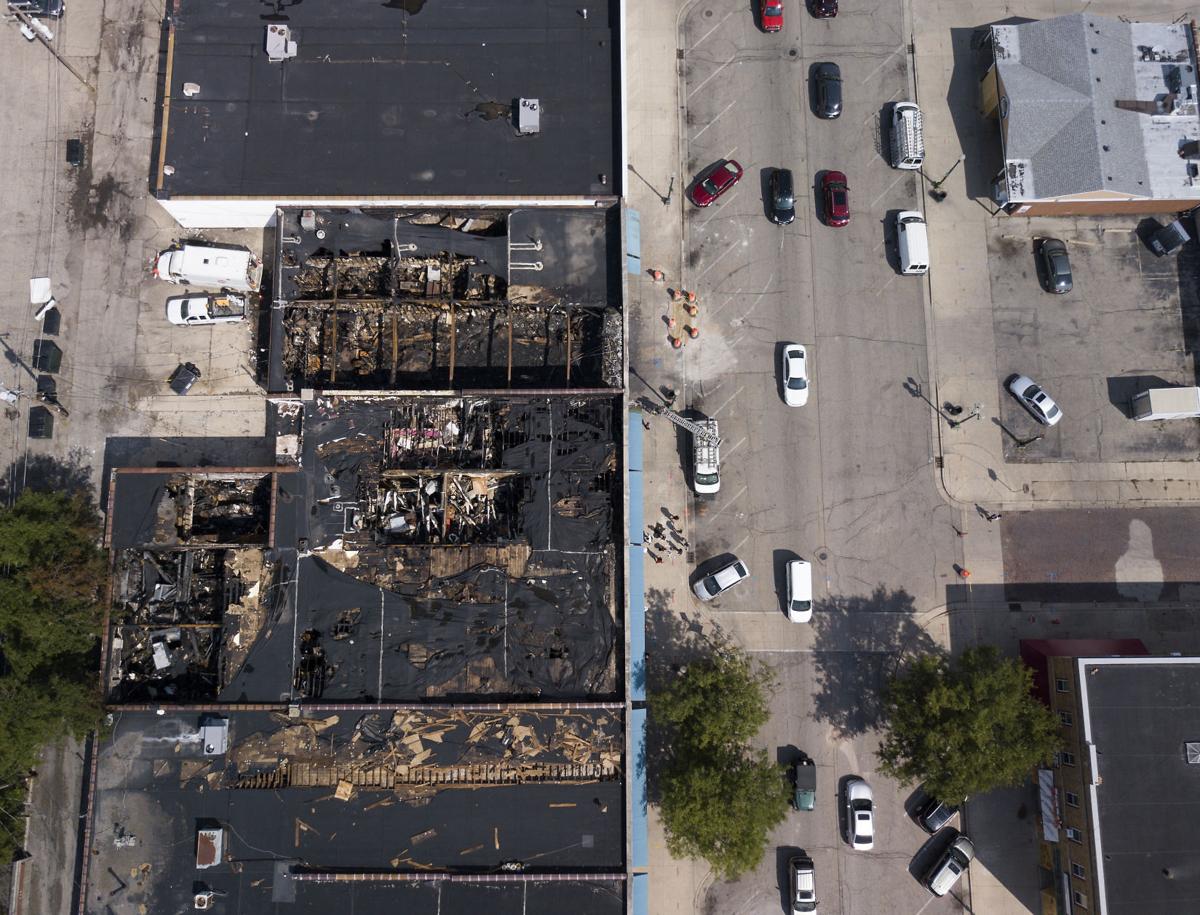 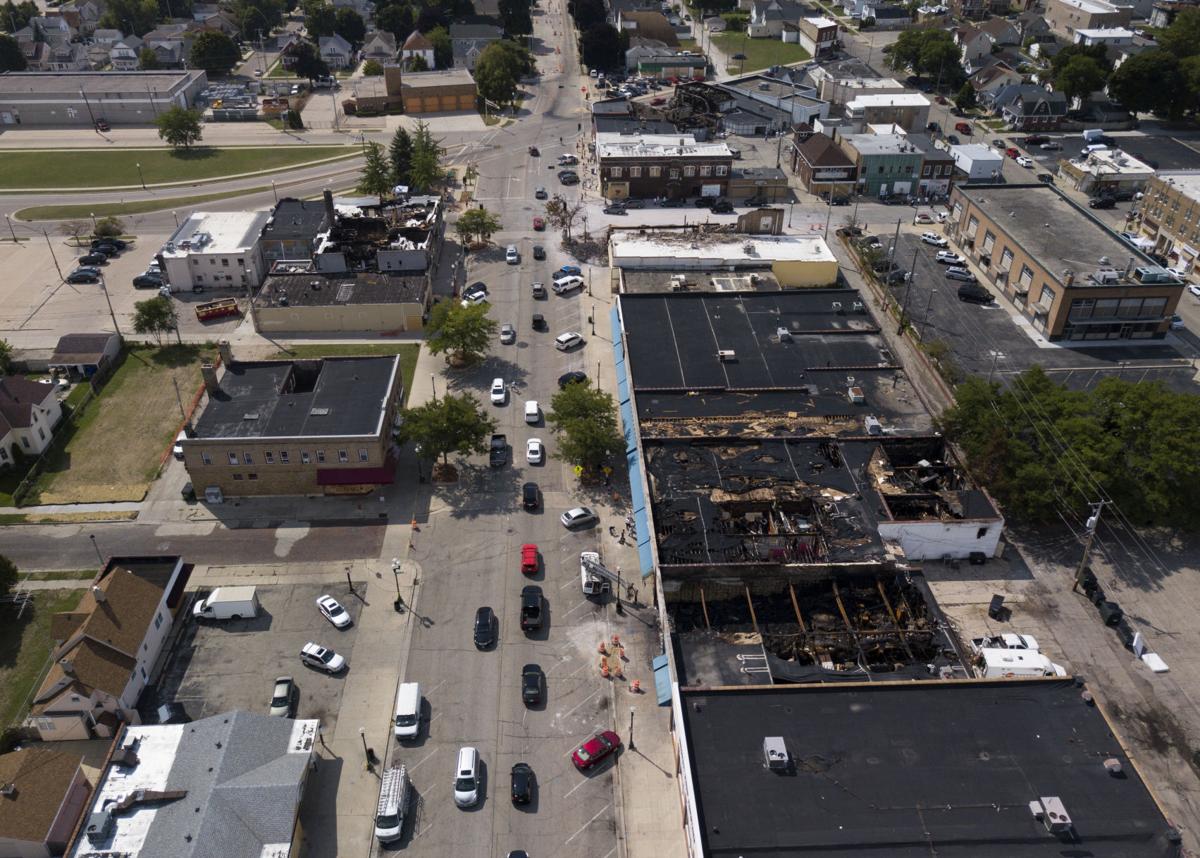 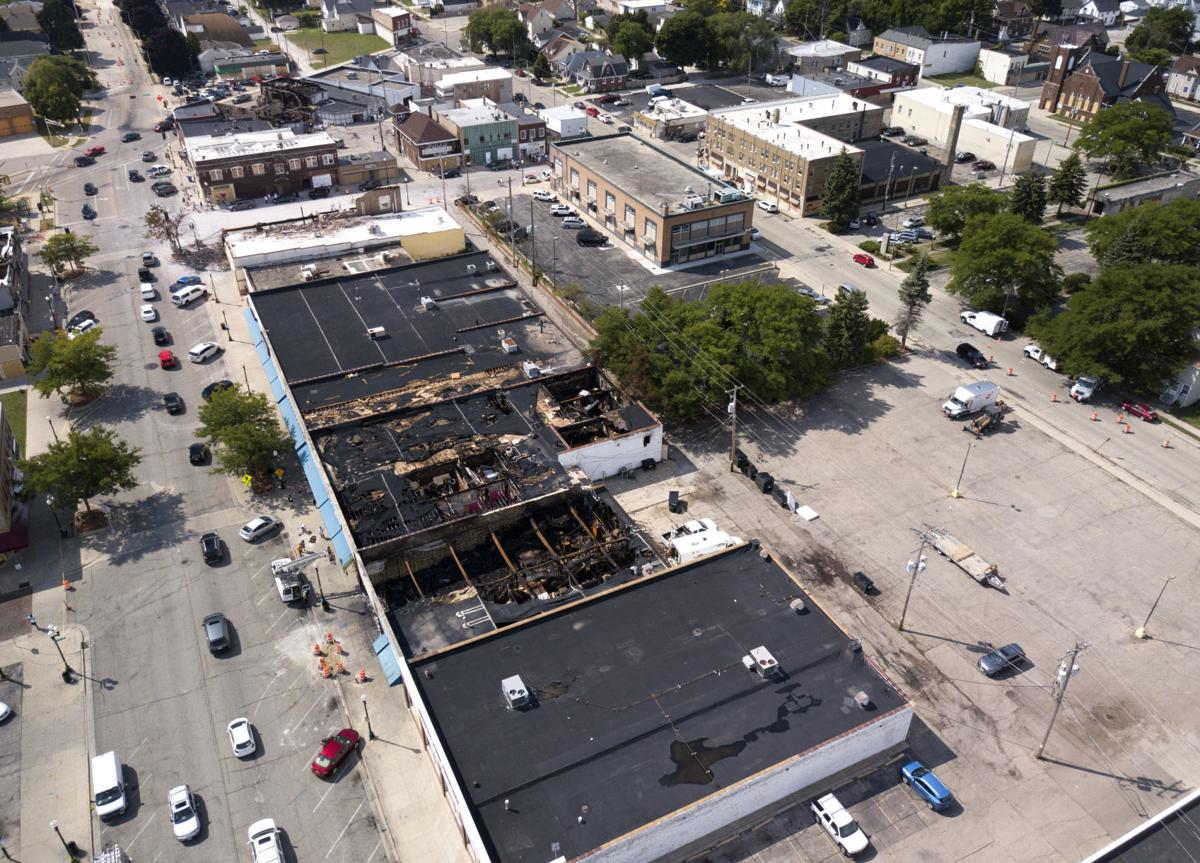 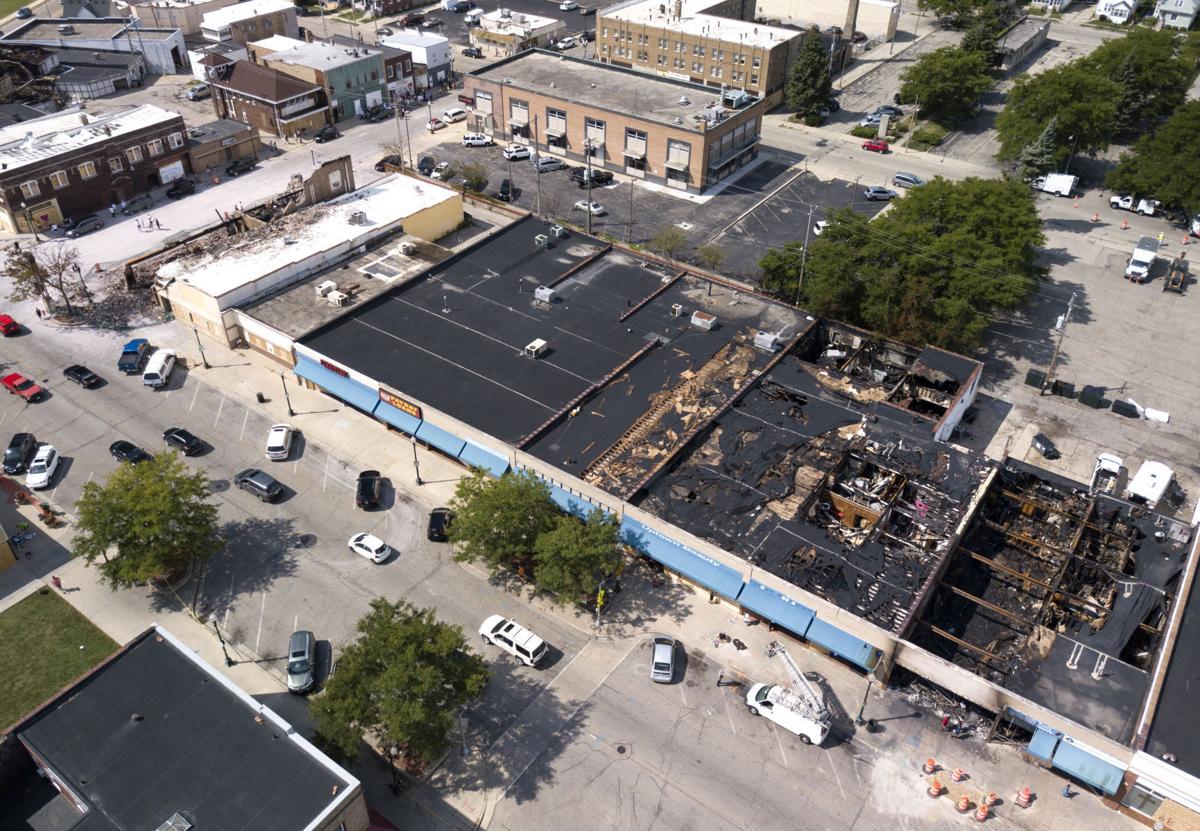 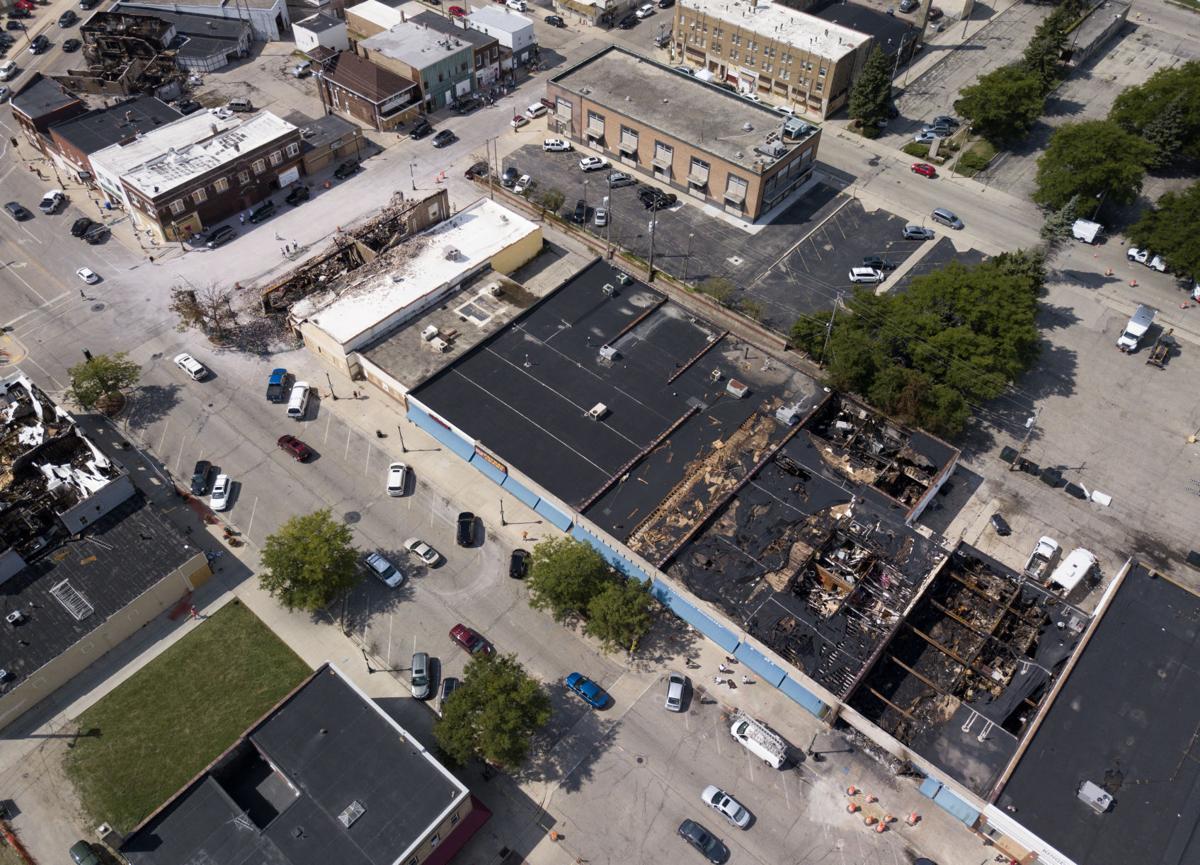 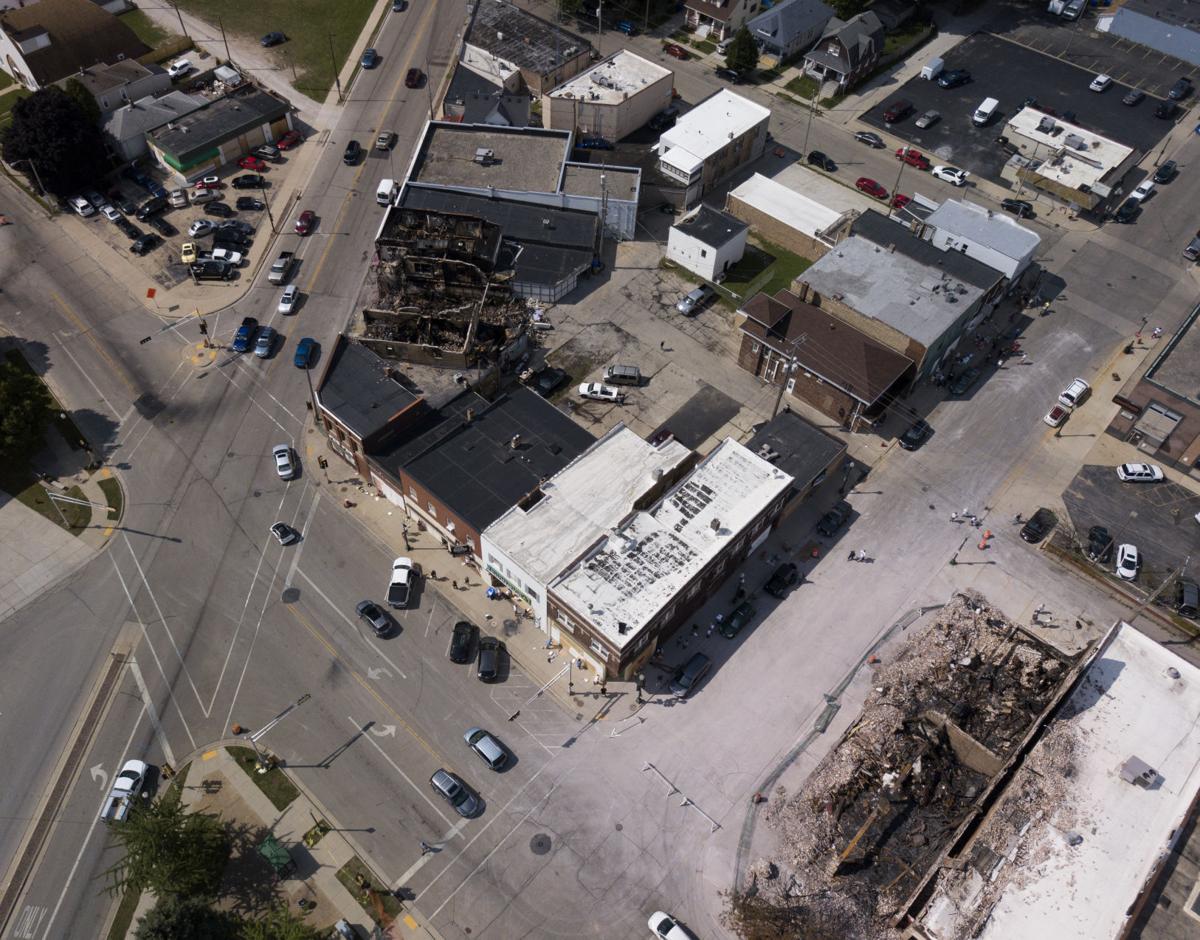 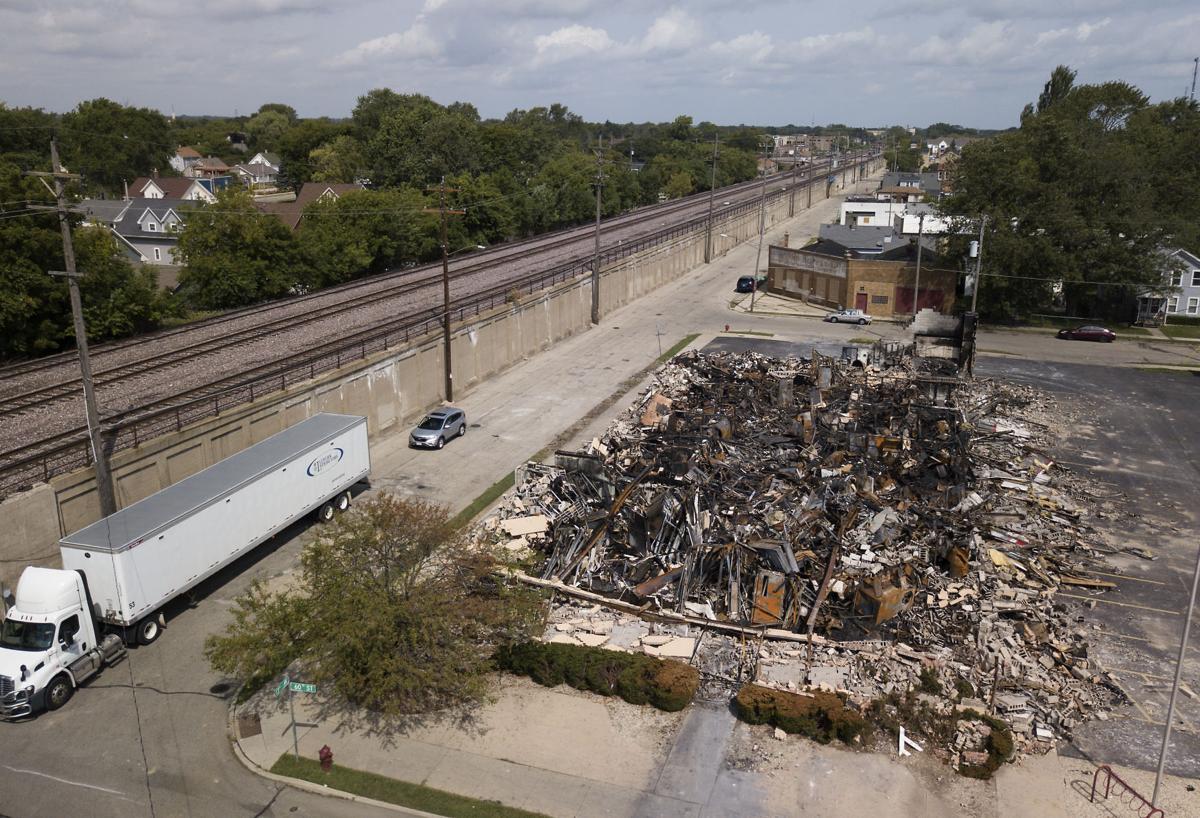 The site of the Department of Corrections on 60th Street and 13th Avenue. 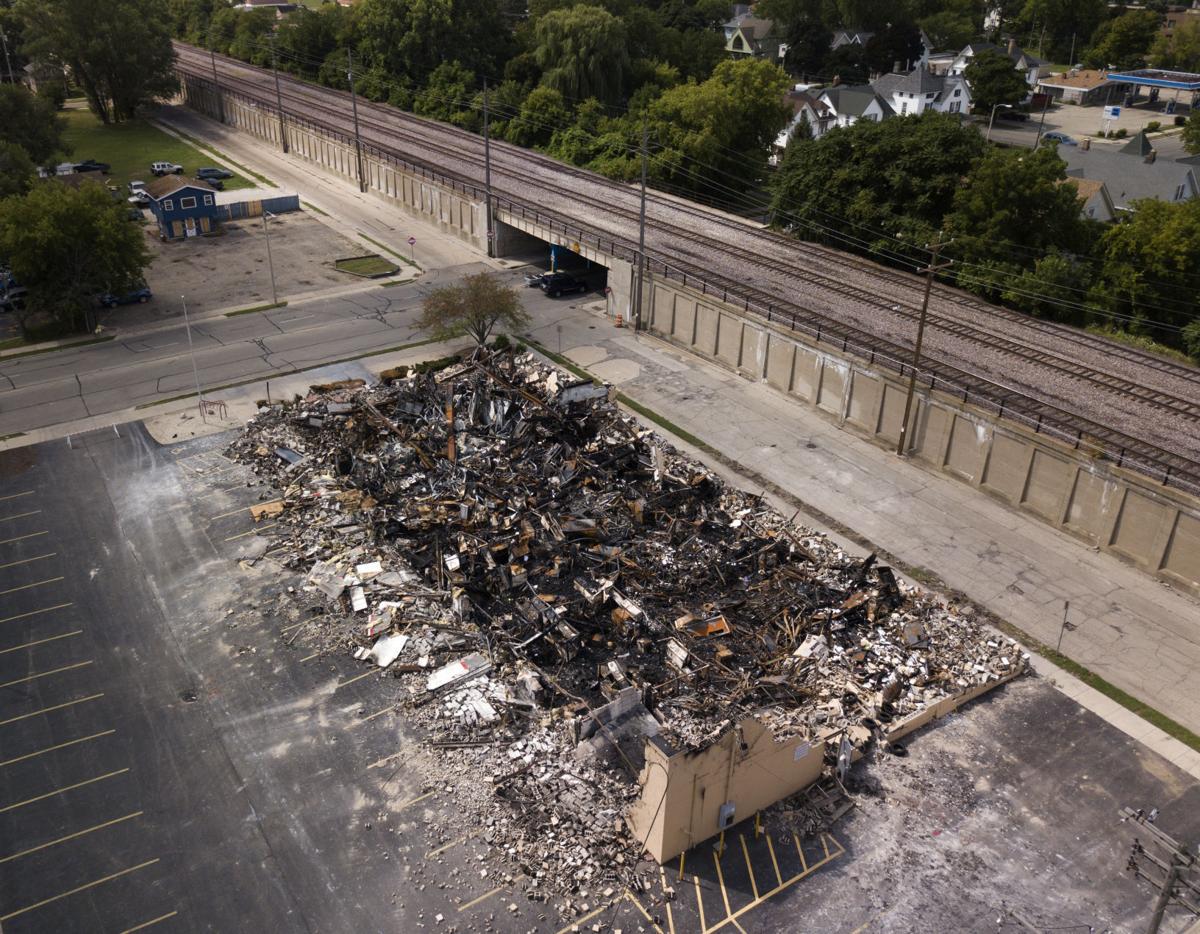 The site of the Department of Corrections on 60th Street and 13th Avenue.

Trump described the vast majority of police officers as "honorable, courageous and devoted public servants," but also spoke to the challenges in law enforcement, which he said can be exacerbated by "bad apples." He also repeated his characterization of police officers who harm people as "choking," which in a Fox News interview on Monday he compared with golfers missing a three-foot putt.

"You have some bad apples, we all know that, and those will be taken care of through the system and nobody is going to be easy on them either," Trump said. "And you have people who choke … I know you practice this all the time where you give people literally a quarter of a second to make a decision and a lot of them can’t make that right decision, it’s a very tough thing to do."

Also on Tuesday, Trump announced his administration will commit $42 million to the state for public safety support, funding for additional prosecutors, direct aid to law enforcement and funding for small businesses damaged by protests.

On Tuesday, Evers announced up to $1 million in disaster recovery microloans to Kenosha businesses damaged amid protests. Businesses will be eligible for up to $20,000 each in no-interest loans to cover repair costs.

Trump's visit on Tuesday was met with a mix of praise and concern, as several Republicans, including former Gov. Scott Walker and U.S. Sen. Ron Johnson, encouraged Trump’s visit. On Monday, seven members of the 23-member Kenosha County Board urged Trump not to cancel his visit.

At the same time, some state and local Democratic officials, including Evers and Kenosha Mayor John Antaramian, have urged the president to call off the trip for fear that it could fan the flames of ongoing unrest in the community.

Anthony Davis, 49, who was in Kenosha from Illinois on Tuesday, said he felt terrible after watching the widely circulated video of police shooting Blake multiple times in the back.

"It just needs to stop and this guy here … Donald Trump is the root of the whole problem," said Davis, who is Black, in reference to the president.

Kenosha resident Barbara Griffin, 60, stood near Civic Center Park — where much of the protests have taken place over the last week — wearing a pink "Make America Great Again" hat. Griffin said she supports Trump's visit to her community, as well as the president's message for law and order.

"Seeing my city in flames, waking up and smelling buildings being burned with my morning coffee — I'm not happy," Griffin said. "I'm upset to see my city destroyed."

On the city’s north side, just west of the Washington Park Municipal Golf Course, more than 200 people gathered late Tuesday morning at the site where Blake was shot.

A throng of media from around the world was there as Blake’s uncle, Justin Blake, spoke, along with the Rev. Jessie Jackson and state Rep. Gwen Moore, who grew up about three miles from the neighborhood.

The scene included inflatable bouncy houses, a craft table for children, free haircuts, voter registration tables and the smell of grilled brats and ribs. Another table overflowed with brooms, shovels and cleaning supplies that were to be used to help clean damaged areas.

Justin Blake said his nephew remains in the hospital and paralyzed from the waist down but is able to speak and reach out and touch family members. Justin Blake implored for peaceful protests but also legislative action to create change.

“We want legislation, we want bills and we want laws,” Justin Blake said. “It’s 2020. The matrix are falling and the gig is up. We no longer are going to tolerate this. As a community we’re going to work together. We’re going to put aside our differences and agree to disagree and rebuild our community.”

On Monday the Legislature briefly opened a special session that Evers had called to address police practices, but took no action. Republicans said they hope to be ready to pass something by Jan. 1.

“I don’t have any words for the orange man," Justin Blake said. "All I ask is that he keep his disrespect, his foul language far away from our family. We need a president that’s going to unite our country and take us in a different direction.”

State Journal reporters Elizabeth Beyer and Barry Adams and the Associated Press contributed to this report.

ATLANTIC CITY — Although the Miss America Competition left its birthplace for the second time in 2019, there are still a few places in town wh…

Henry George “Bud” Broome, who served as a judge in Atlantic County starting in the late 1970s, died Wednesday, according to an obituary appea…

See video and photos from people participating in events related to President Trump's visit to Kenosha, Wis. Graphic language may be audible i…