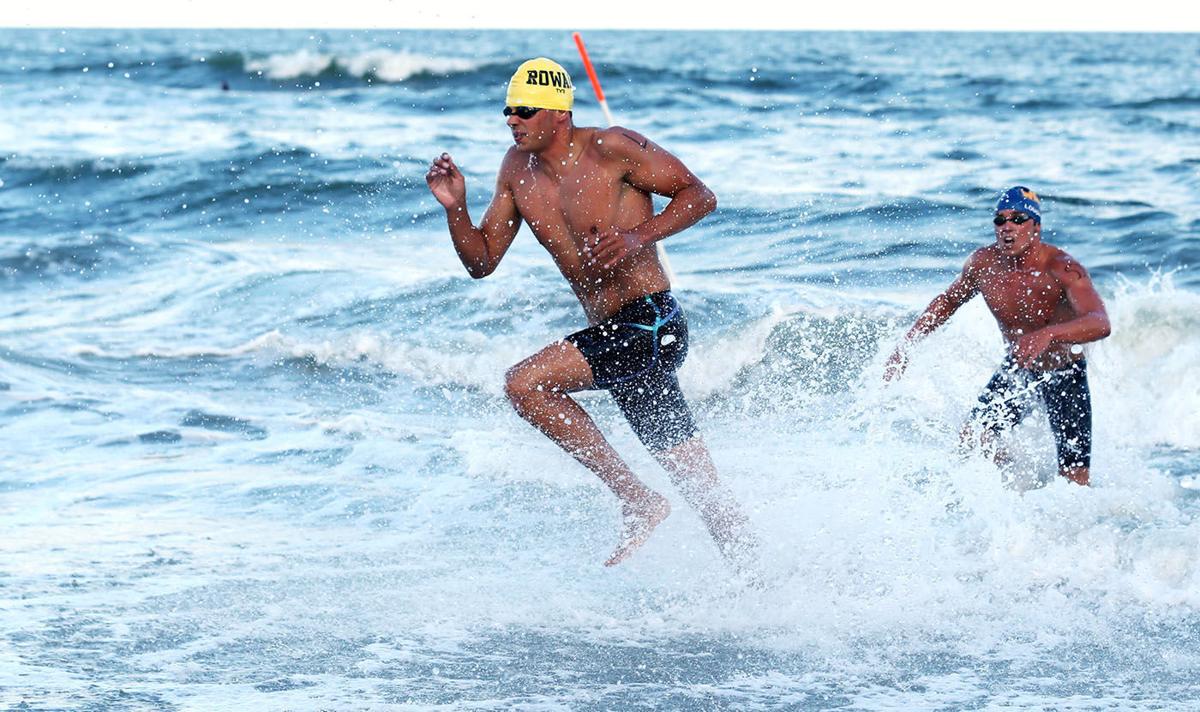 John Tepper, left, runs ashore to win the swim race for the Longport Beach Patrol in 2017 during the 78th annual South Jersey Championships. 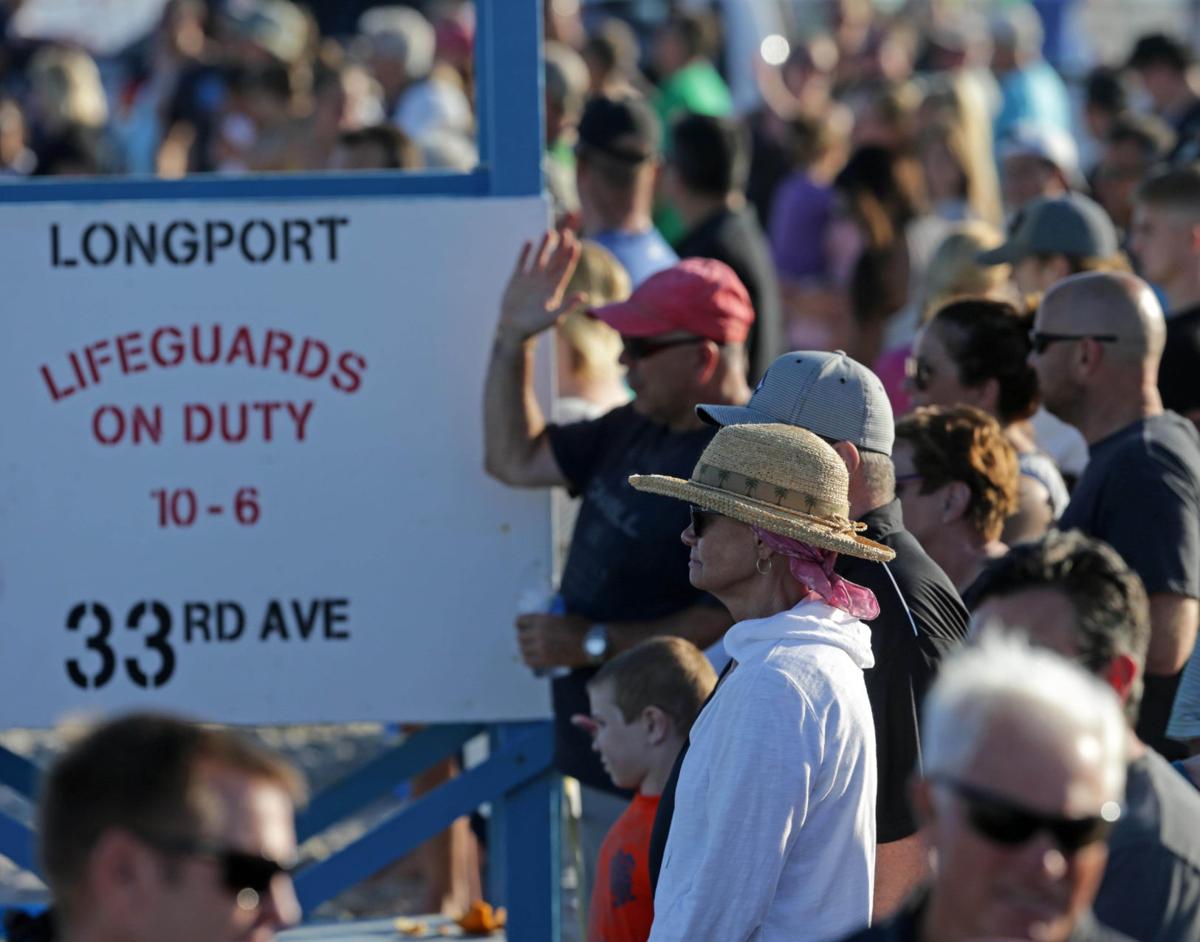 Lifeguard races typically draw a big crowd to the beach.

Summer lifeguard racing, shut down last year due to COVID-19 restrictions, is set for a big comeback.

Large crowds will once again gather at South Jersey beaches to cheer on their local beach patrols.

The races are a staple of summer in the region. People spend all day at the beach, then watch the races.

“It looks like we’re having all the races again,” said Sandy Bosacco, president of the Chiefs Association and Stone Harbor’s Beach Patrol captain. “Everything’s normal, like any other year.”

Lifeguard races are great to watch, because the spectators are on the beach and are right near the competitors. The fans see the finishes up close.

Besides offering lifeguards a competitive outlet, the races also get the guards ready for their day job of rescuing.

“The competition encourages everyone to do additional training, and it makes you more effective in lifesaving,” Bosacco said. “You’re more fit, and you sharpen your skills. Guards train before and after work, and rescuing becomes second nature.”

“I’m definitely looking forward to (the races),” said Tepper, an Egg Harbor Township resident who will turn 19 on Friday. “It brings a lot of people out to watch.”

Tepper swam mostly the 1,000- and 500-yard freestyle and the 400 individual medley this winter in his first season for the University of Tennessee.

Tepper trains just as hard for the beach races.

The South Jersey Championships, considered the area’s top lifeguard event, is tentatively scheduled for Aug. 13 in Longport. The winning team always hosts the event the following year, and it wasn’t held last summer. The event, which began in 1924 and was not always held in its early years, will be in its 81st year.

“There’s a lot of tradition in the races,” Bosacco said. “I’m pretty sure the South Jerseys is the oldest lifeguard race in the country, and that’s pretty interesting.”

The Chiefs Association’s first event will be the Captain Michael D. McGrath Longport Memorials, which is tentatively scheduled for July 2. There will also be four all-female events, three in July and one in August.

Wildwood Crest Beach Patrol Chief Bud Johnson is in his 56th year as a lifeguard, and he’s glad to see things returning to normal.

“All the races are on, and ours (Wildwood Crest hosts the Cape May County Lifeguard Championships) is set for the 9th of July,” Johnson said. “We’re back to having two guards on the stands. We had one guard on each stand last year, and all we did was guard the beach. All the guards look in good shape. We had a packed beach Friday and Saturday, and the town is crowded. We’re having our junior lifeguard program again. We didn’t last year. We’ll also have our Lifeguard Ball and our Alumni Weekend. We’re back doing like it’s 2019.”

Oarsman Terry McGovern, 47, is one of the Crest’s top athletes. In one of the few beach patrol events held last summer, he combined with Crest guard Darrick Kobierowski to win the 49th annual Bud Tarbotton North Wildwood Beach Patrol Around the Island Row. It was the fifth time in seven years that McGovern and Kobierowski won the race, which is a 20-mile race around Wildwood.

The row, held in the morning, attracts only about 100 fans and family members each year. It fit the protocol in place last August, though it wasn’t easy. Some fans wore masks, and the indoor post-race luncheon was canceled.

McGovern is looking forward to more racing this summer.

“I think it’s great for all the patrols to get back to racing,” McGovern said. “It’s part of the history of lifeguarding, and it showcases what we do. Our racing lets the public see the skills used in lifeguarding, and it reinforces their faith in the guys and girls to keep them safe. A person watching will think, ‘Wow, if my child was out there, they’d be able to get to him quickly.’”

The Long Beach Island Lifeguard Tournament is the LBI Beach Patrol’s top event. The Harvey Cedars Beach Patrol has won the tournament from 2015 to 2019 (it wasn’t held in 2020).

“The structure and education around the racing is what makes it important,” Townsend said. “We instruct young people on ocean safety. You have to be aware of everything that’s around you. We promote safety and want the public to be well-informed about it.”

Townsend said the island’s races are on this summer, and the 59th annual LBI Tournament will probably be in late July.

“We have pretty much all our competitors back, and we have some new people who will be an extraordinary asset to our team,” he said. “We’re excited for this year. We’re looking to have way more fun than last year.”

Look Back at Lifeguard Races though the years

What happens if the Suns do not have Chris Paul for the Western Conference Finals?

Is there any value in the National League East?

Is there any value in the National League East?

How do the Clippers adjust without Kawhi Leonard for Game 5?

How do the Clippers adjust without Kawhi Leonard for Game 5?

Three rescued from ocean in Wildwood

WILDWOOD — Three people needed to be rescued from the water at Andrews Avenue on Thursday.

Look back at the 2019 South Jersey lifeguard race season

John Tepper, left, runs ashore to win the swim race for the Longport Beach Patrol in 2017 during the 78th annual South Jersey Championships.

Lifeguard races typically draw a big crowd to the beach.