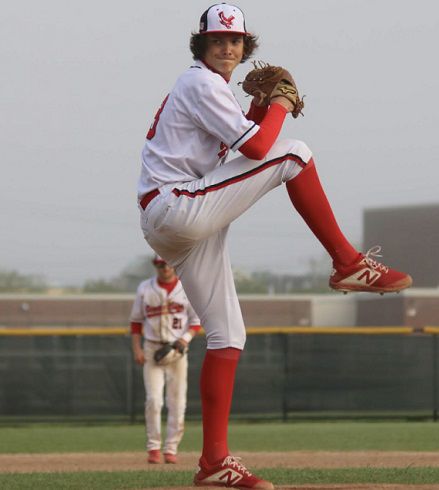 Jake McKenna helps pitch Ocean City to a 6-0 win over St. Augustine Prep in 2019. As a junior, he struck out 18, gave up two hits and one earned run in 81/3 innings for the Red Raiders.

The 2020 Ocean City High School graduate quickly said yes and signed when the Philadelphia Phillies offered him a minor league contract Sunday morning. The 6-foot-7, left-handed pitcher will receive a $20,000 signing bonus, the maximum allowed this year for undrafted players.

McKenna grew up a Phillies fan, and his favorite player is pitcher Cole Hamels.

“I accepted their offer right away,” McKenna said in a phone interview Sunday afternoon. “I knew that’s where I wanted to be in Philly.”

Major league teams were allowed to sign players who were not taken in last week’s First Year Player Draft beginning at 9 a.m. Sunday.

He took the call in the living room of his Ocean City home with his father, Ryan, mother, Erika, and 24-year-old sister Natalie.

“It’s a dream come true,” McKenna said. “I don’t even know how to react. My mom was crying. My sister was crying. My dad was super excited. It was a great moment. We all hugged.”

McKenna’s signing comes at one of the most unique points in baseball history and completes a remarkable year of development for him.

This year’s draft was unlike any other. It was just five rounds, not the usual 40, because the COVID-19 pandemic has caused baseball to cut costs. The pandemic also led to the cancellation of most of the college baseball season.

The NCAA gave current college seniors another season of eligibility. Mc-Kenna was committed to attend Saint Joseph’s University in Philadelphia on a scholarship but said with the seniors returning to college and major league teams also cutting back on their minor league affiliates, he couldn’t pass up the opportunity to become a professional.

“Since the end of the draft, we’ve known this was going to happen,” Ocean City coach Andrew Bristol said. “He’s worked hard for this opportunity.”

McKenna showed promise as a junior last spring, striking out 18 and allowing two hits and one earned run in 81/3 innings.

But he began to develop as a prospect last summer. He worked with Baseball Performance Center in Pleasantville to improve technique and add velocity. He began working out and eating healthier and boosted his weight from 200 to 230 pounds.

“Once I got to the summer, I dialed in my control,” he said. “My (velocity) started jumping. I wouldn’t be where I am today without the guys from the Baseball Performance Center. They brought everything together for me. It’s just been a crazy year.”

McKenna’s fastball now ranges from 89-93 mph. He combines that with a sharp-breaking curveball and a changeup. With his height and downhill delivery, the ball gets on hitters quickly.

The immediate future is uncertain for the players drafted last week and the players who signed Sunday. McKenna said the Phillies probably will participate in some type of fall instructional league.

McKenna will have plenty of time to what worry about what’s next. Sunday was a day for celebration.

COVID-19 canceled McKenna’s senior season but did not cancel his professional baseball dream. McKenna had drawn the interest of a few other major league organizations, but he had been in communication with Phillies officials and minor leaguers the past few months.

“I’ve talked to guys in the Phillies’ minor leagues,” he said. “It just seemed like a great fit for me. It’s always been a dream of mine to play for the Phillies.”

OCEAN CITY — In this year of COVID-19, nothing is surprising, not even playing half of a football game.

Fall fishing continues to improve just about right on schedule.

Holy Spirit runs away from A.C. to complete perfect season

ABSECON — Devin Lee waited his turn to be the starting running back for the Holy Spirit High School football team.

Sometimes Kassidy Wentzell forgets that she no longer plays on a field hockey team.

BURLINGTON TOWNSHIP — With tears in his eyes and attempting to hold back his emotions, Ahmad Ross stood with reporters after embracing teammat…

Getting to end of fall high school season is a huge accomplishment: Must Win

Chuck Donohue is in his 50th season as a high school football coach.

Jake McKenna helps pitch Ocean City to a 6-0 win over St. Augustine Prep in 2019. As a junior, he struck out 18, gave up two hits and one earned run in 81/3 innings for the Red Raiders.