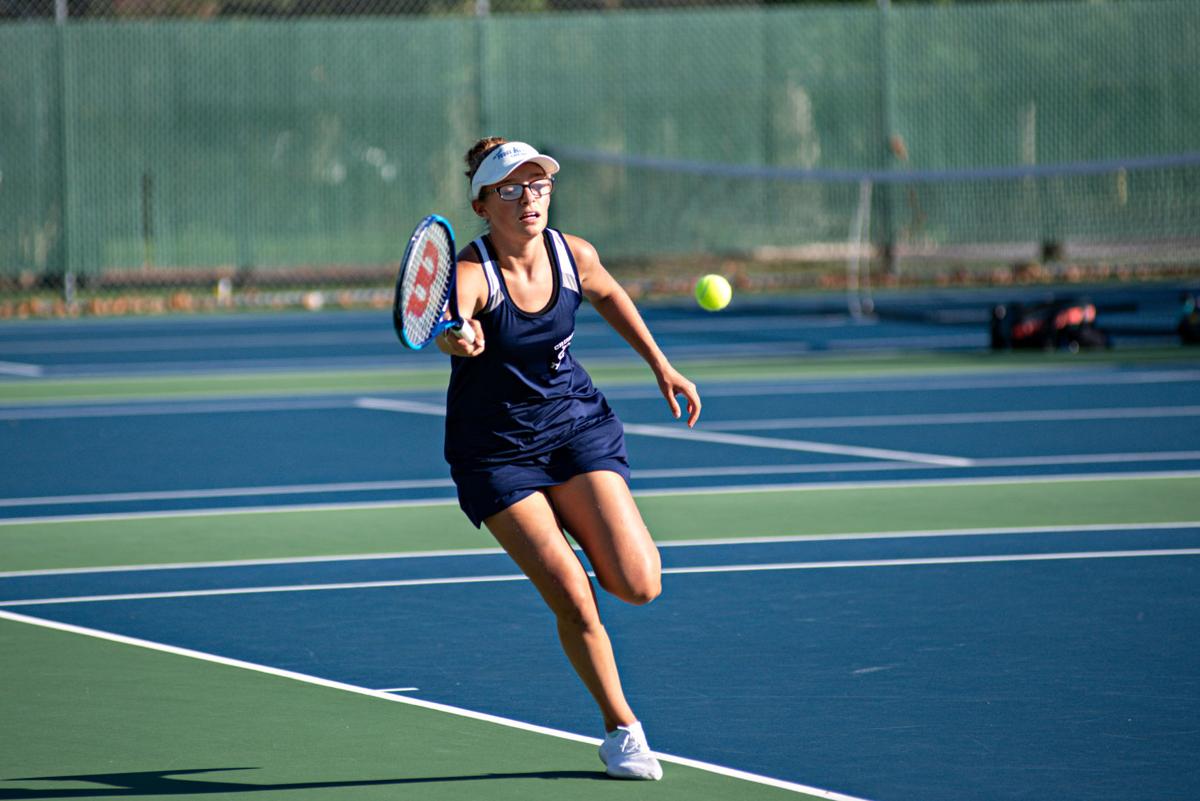 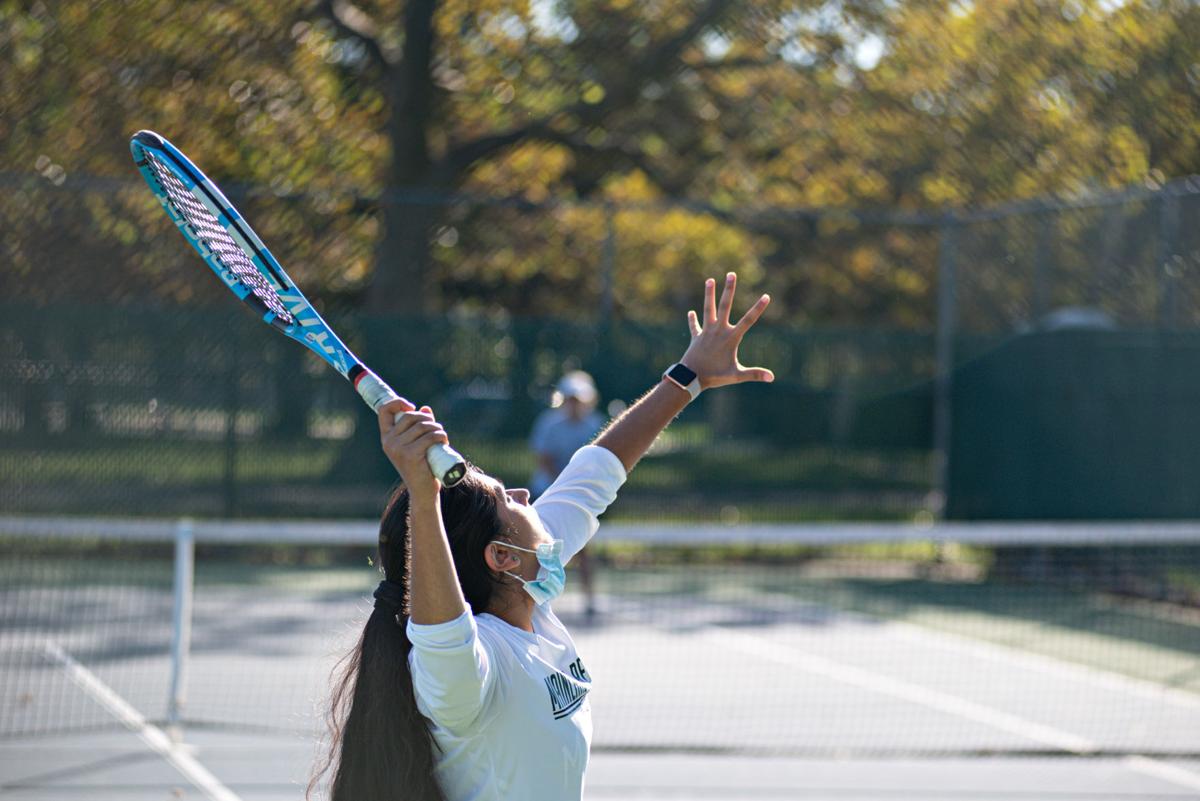 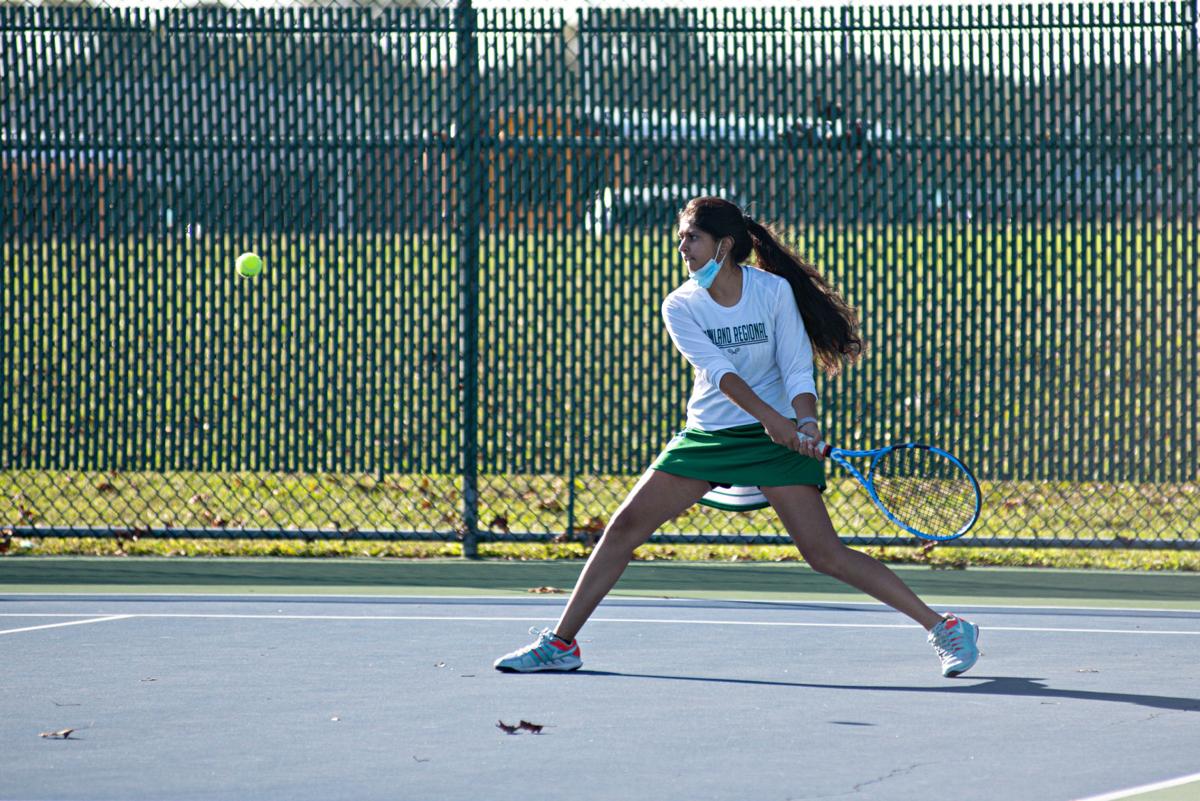 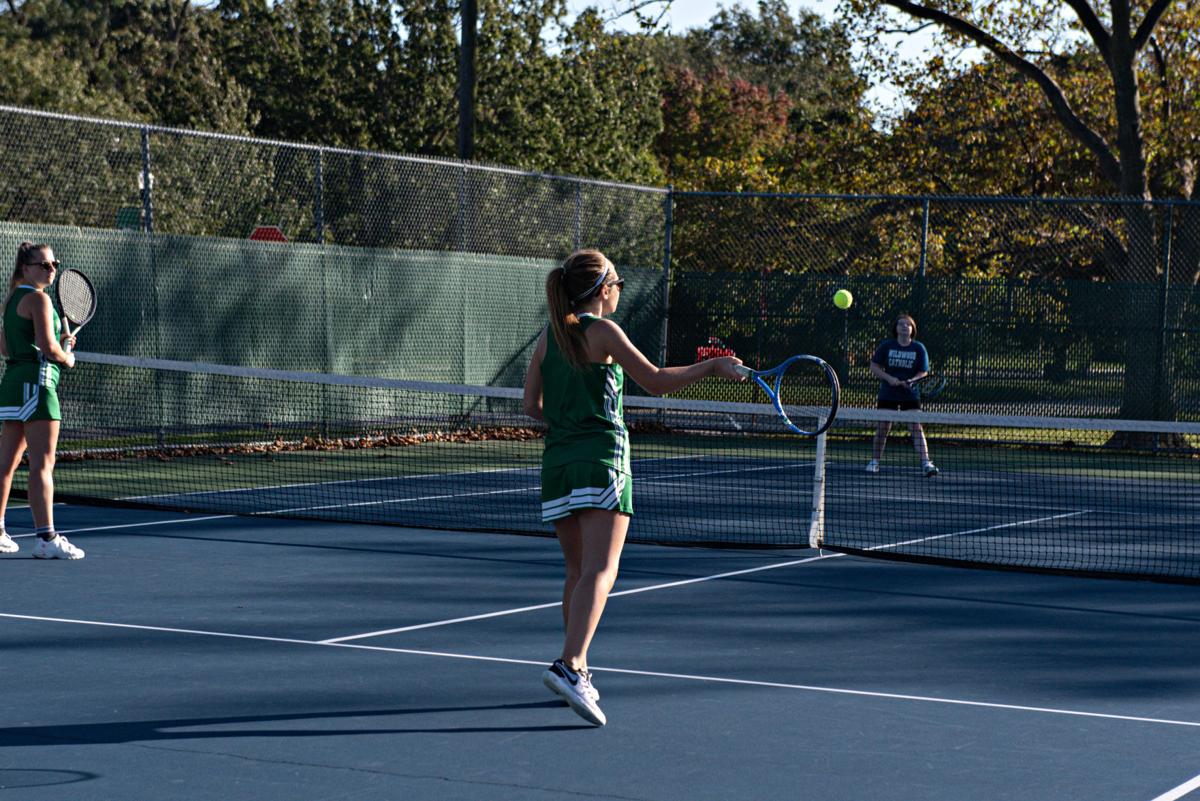 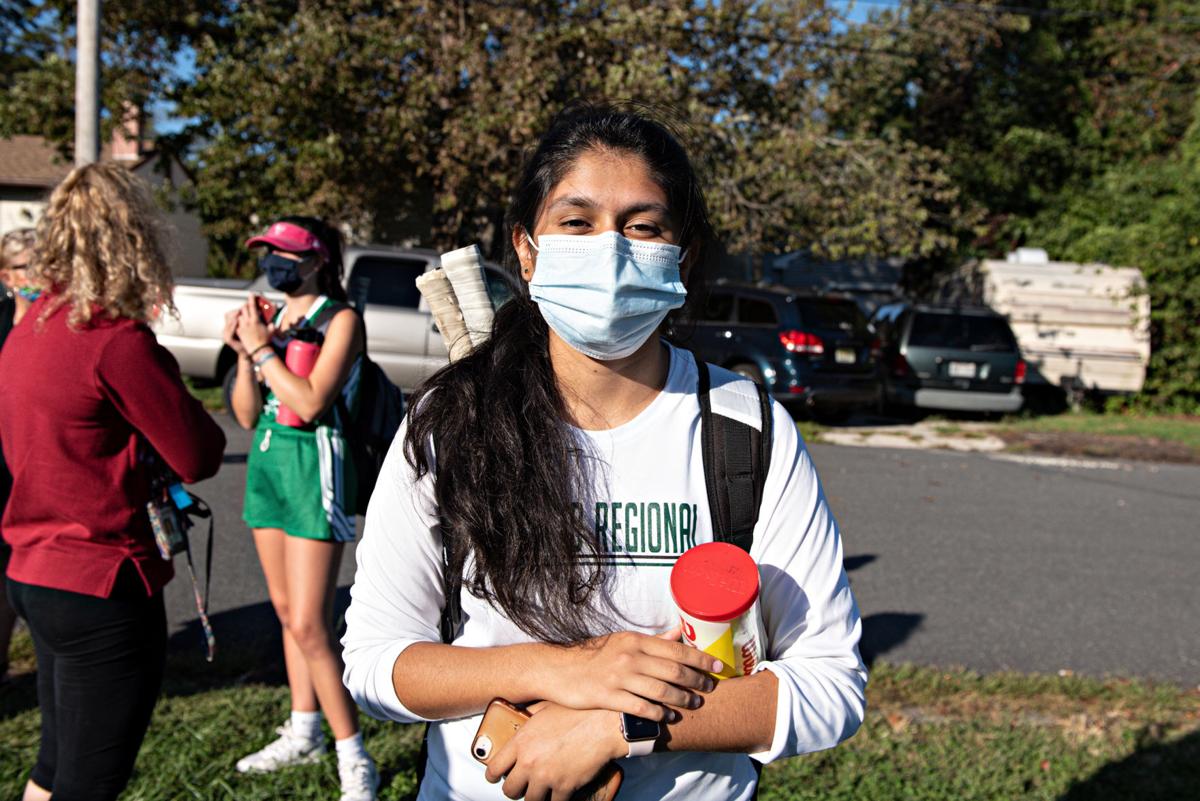 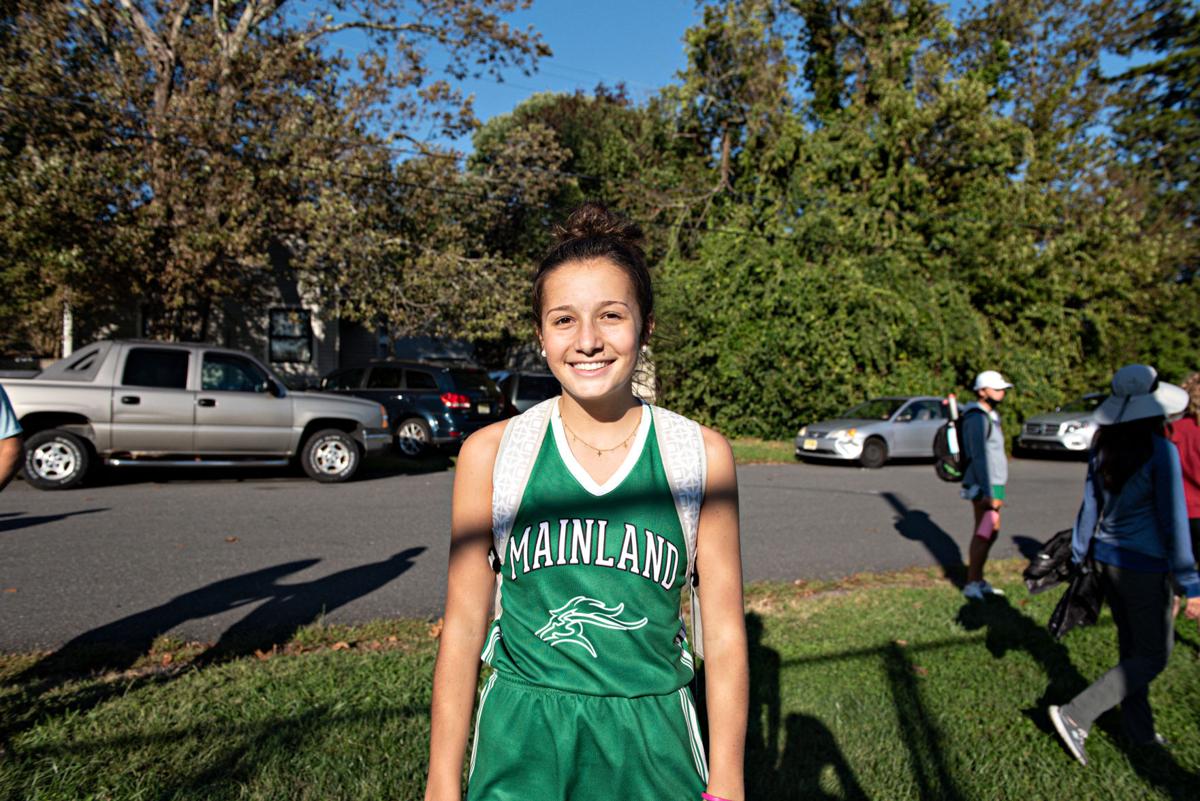 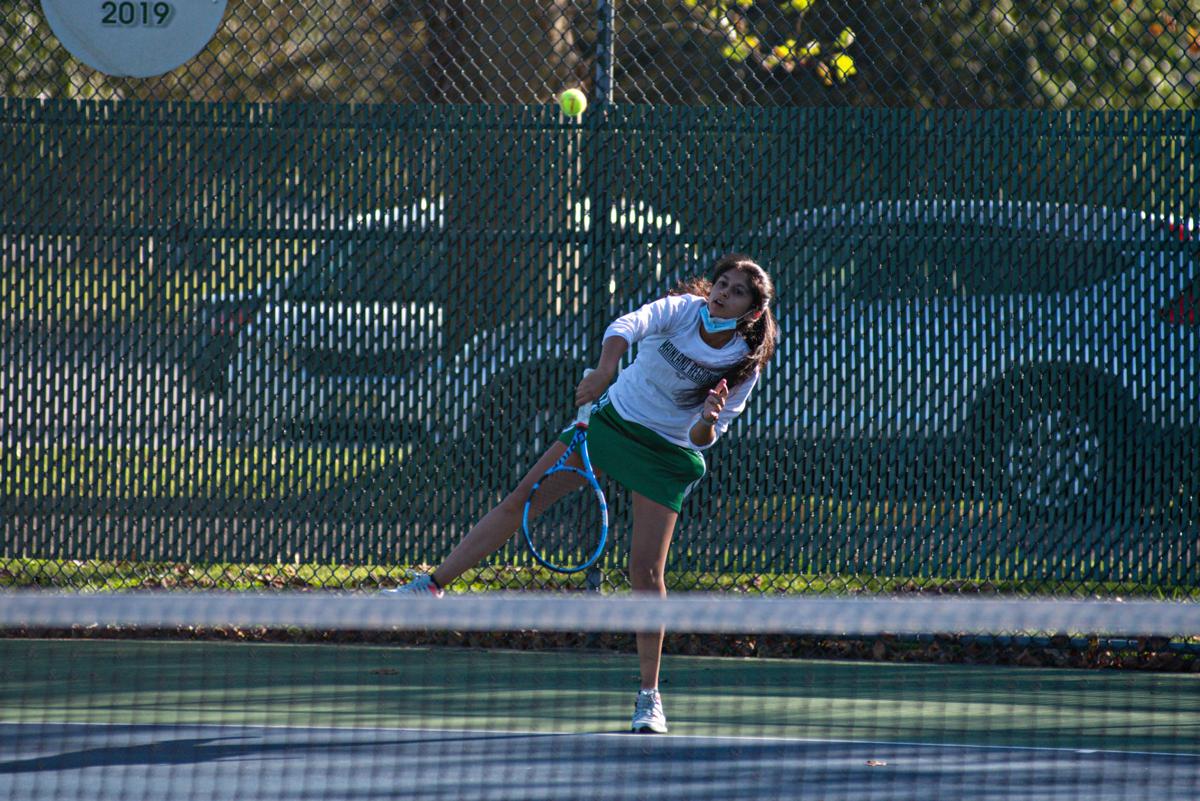 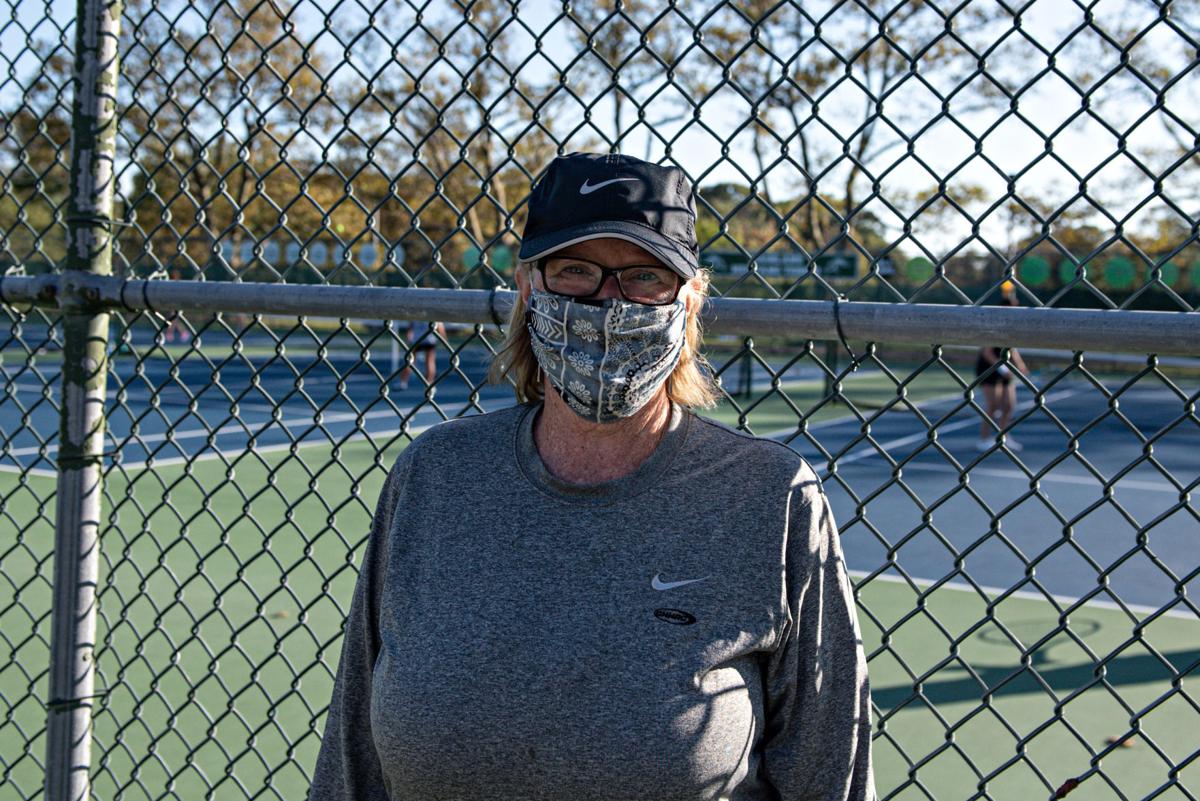 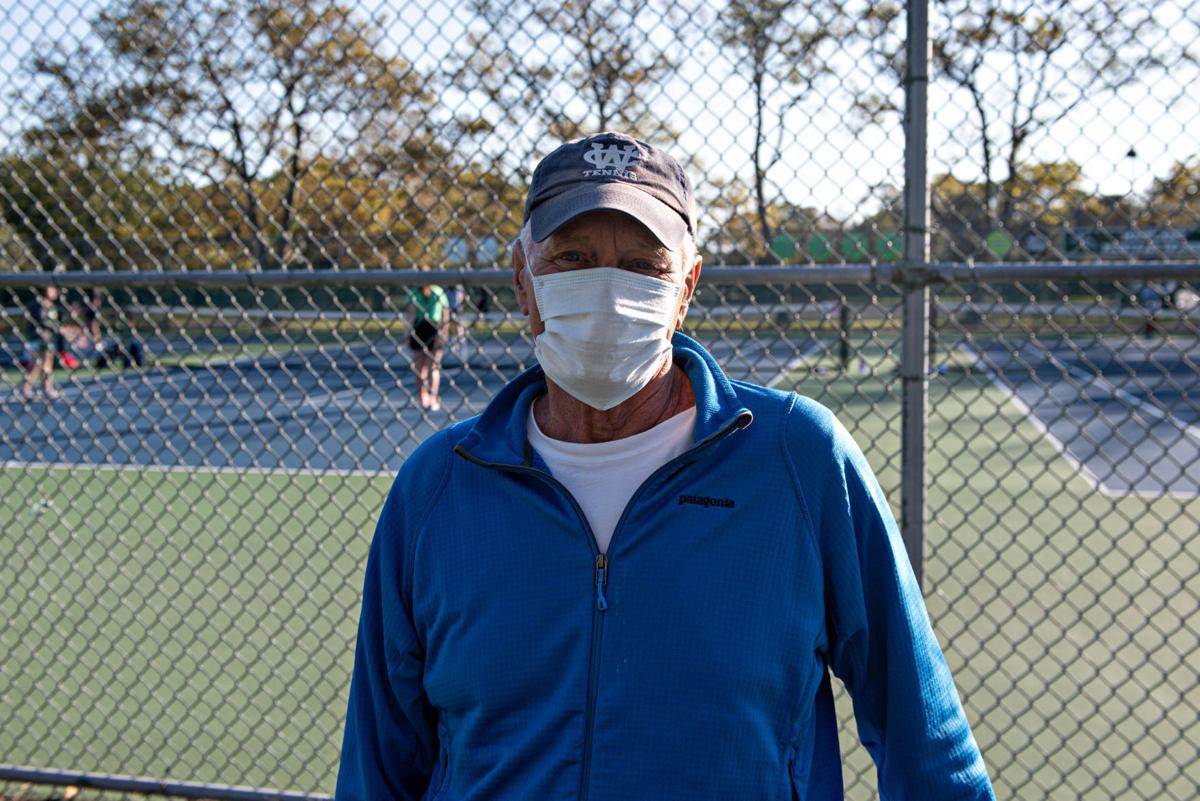 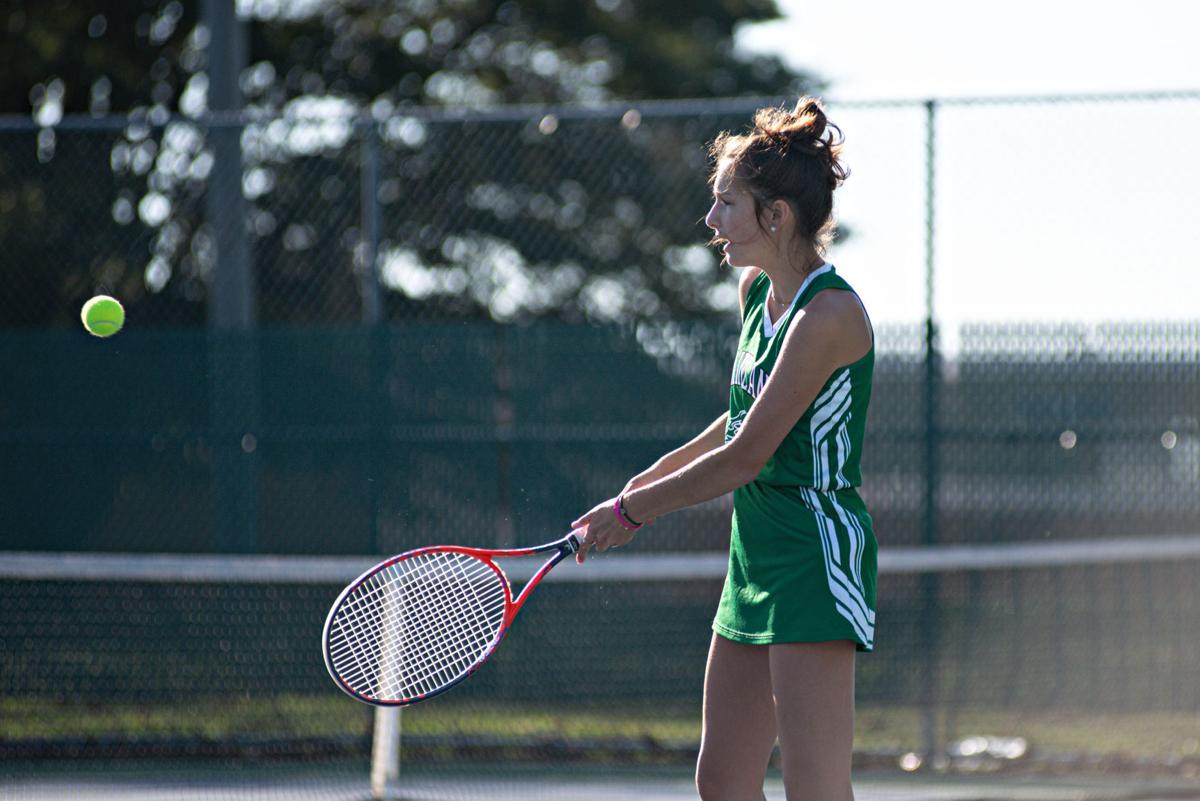 Mainland Regional’s Charlotte Walcoff during the second singles match that she won 6-0, 6-0, on Wednesday in the Mustangs’ 5-0 win over Wildwood Catholic. A photo gallery from the match is attached to this story at PressofAC.com. 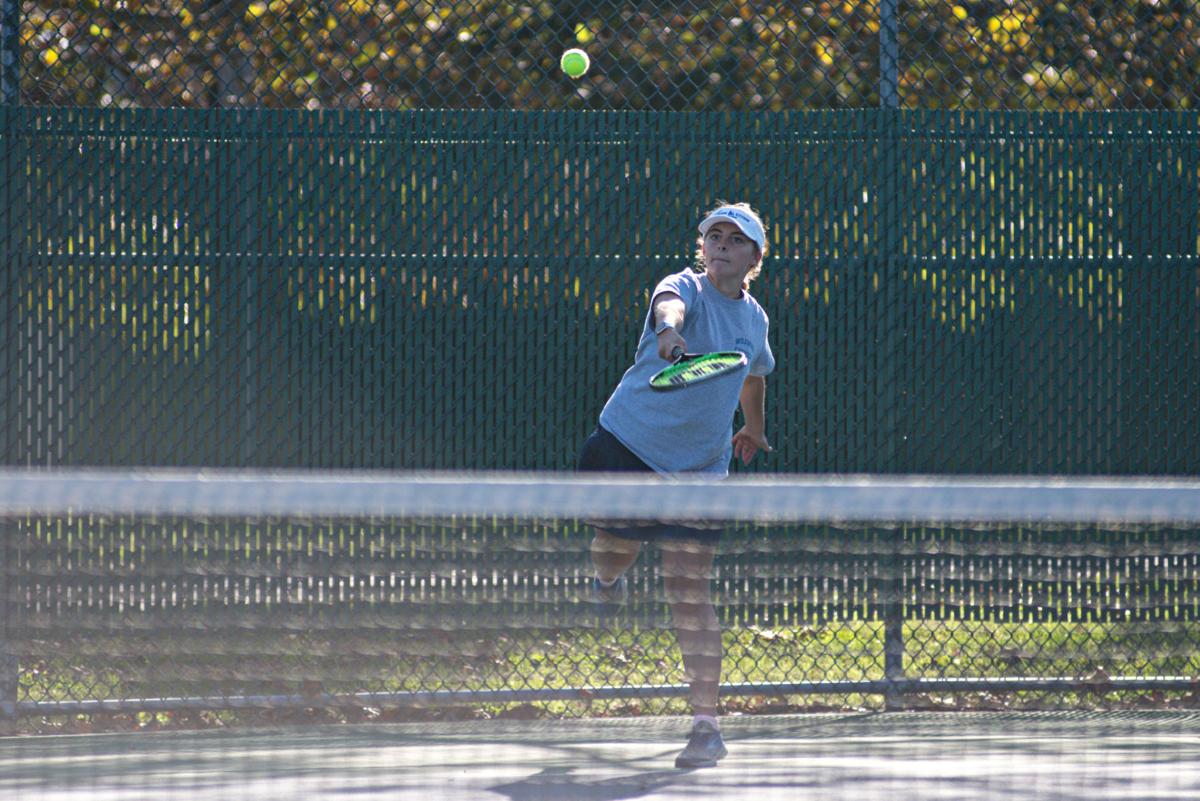 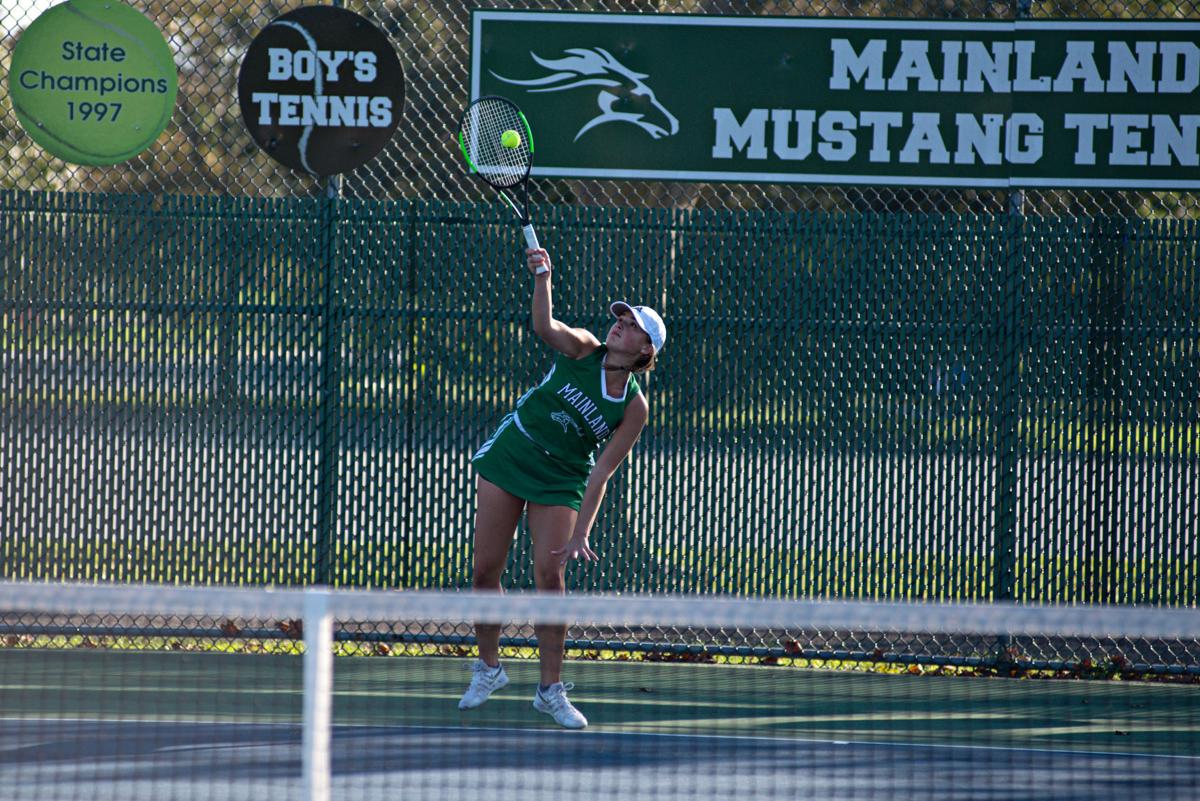 LINWOOD — Khushi Thakkar and Charlotte Walcoff were concerned and had some doubts about the opportunity to compete this season amid the COVID-19 pandemic.

Both were unsure what to expect.

When the shortened season was confirmed, both juniors were thrilled. And that enthusiasm showed Wednesday.

“It feels amazing (to be playing),” said Walcoff, who won second singles over Joanna McShaffry. “I was not really sure about being able to play because other schools had coronavirus outbreaks. Luckily, we get to play some matches.”

Walcoff was the first to beat her opponent.

“It feels great to get the win,” said Walcoff, 16, of Linwood. “This was our first real match of the season, and we are looking great so far this season.”

The 16-year-old from Linwood pointed to tennis already being a socially distant sport, so she was really glad the New Jersey State Athletic Association permitted them to have a season.

“I’m really excited for our season,” said Thakkar, who was a second-team Press All-Star last season. “It was a great first match. It was a great start to the season, and I hope this continues for the rest of our matches.”

Players on the court put on masks immediately after they were done competing and did not shake hands after their matches were over.

“I’m really glad we had the season,” Thakkar said. “Everyone is wearing their masks and taking their precautions and social distancing, so it’s good. It feels safe when we play.”

Last season, Mainland finished 17-2 and advanced to the South Jersey Group III semifinals. The team made the semifinals for at least the seventh consecutive fall. The Mustangs competed in the sectional finals in 2018 and won the title in 2016.

Mainland made the quarterfinals in 2012.

That can’t happen this season as the NJSIAA will not have any state tournaments. New Jersey tennis teams, however, will still be able to compete for regional titles.

“Obviously, those state tournaments, the competitive feel is amazing,” Thakkar said. “But, even here, just playing now, we get those vibes and it feels great to play with my team.”

“It’s great to just have the girls out here,” Yohe said. “Like (Thakkar and Walcoff) said, we weren’t sure this would happen, so everything is a plus at this point.

“I’m really happy with how they played. They’ve been working really hard. … It couldn’t have gone any better, so I’m happy.”

“The girls, by the end of the season, will develop and be better,” Halasz said.

“I’m proud of them and very happy with them. It was a good learning experience. I’m very hopeful (going forward) because we will play teams less experienced than (Mainland) and we will get better.”

What are the CAL's boys and girls basketball plans for the winter?

The Cape-Atlantic League boys basketball season could begin with a Dec. 21 matchup between St. Augustine Prep and St. Joseph Academy.

MILLVILLE — An exciting game between the Middle Township and Millville high school field hockey teams went back and forth Monday.

Black sea bass and tautog fishing has been excellent

Great fall weather brings out the fishers, and fishing is great, too.

Mainland Regional’s Charlotte Walcoff during the second singles match that she won 6-0, 6-0, on Wednesday in the Mustangs’ 5-0 win over Wildwood Catholic. A photo gallery from the match is attached to this story at PressofAC.com.