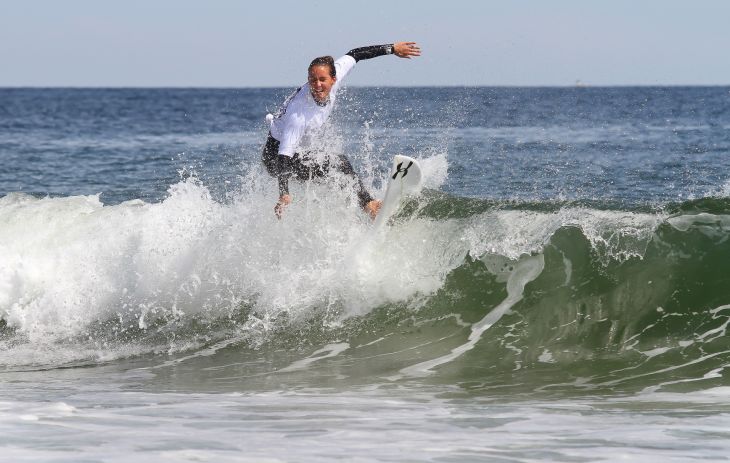 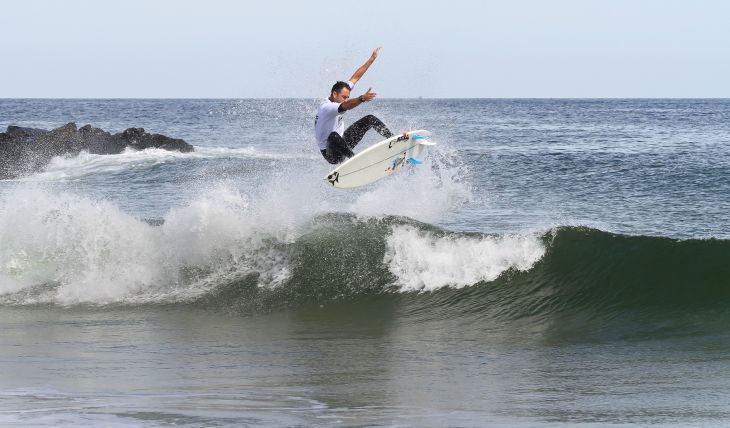 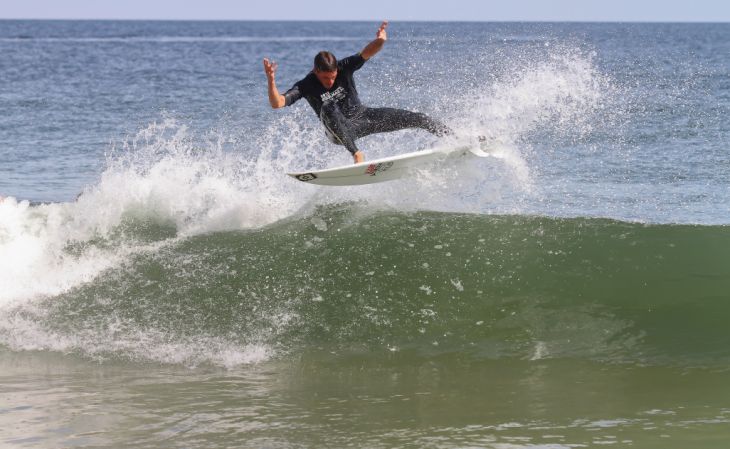 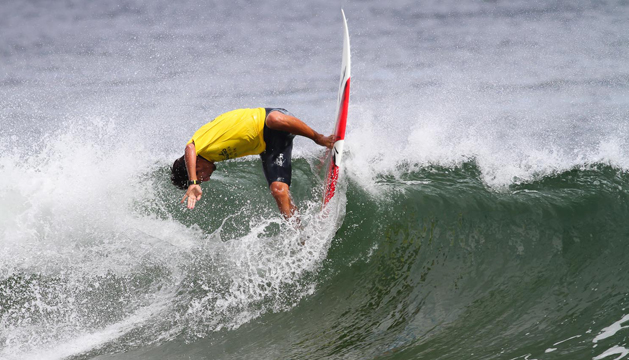 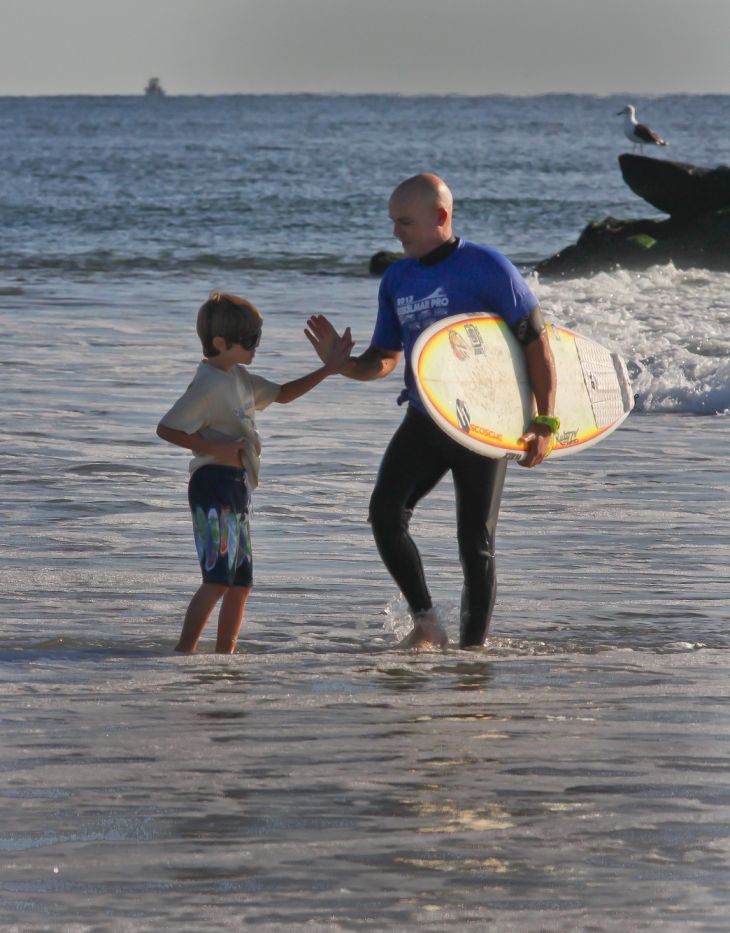 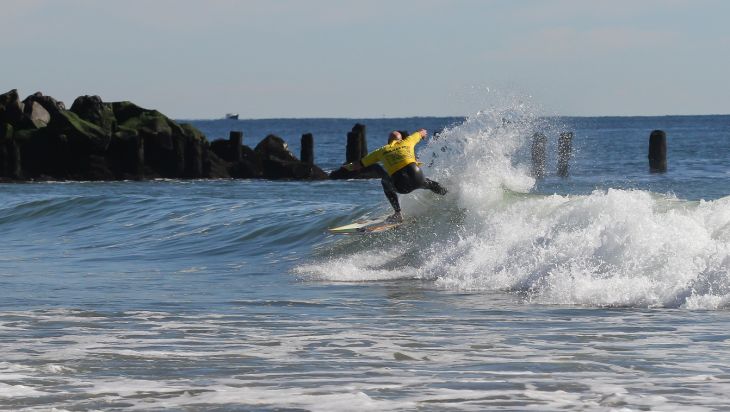 By JON COEN, For The Press

Maddie Peterson, 15, of Wildwood Crest, won the Women's Pro division, while Matt Keenan, 38, of Ocean City, took the crown in the Master Pro (35 and older).

Graced with waves from Tropical Storm Gabrielle that passed several hundred miles offshore, the swell peaked on Friday but provided enough waves for contestable action on Saturday and Sunday.

Peterson continued a highly successful season with her first Women's Pro title. She has been competing at Belmar since she was 12.

In the closing moments of the Belmar final, she found a right and carved one backside turn that earned her nine points toward a16.07 total. That score propelled her over former champ, Jessica Kwiecinski, 19, of Bradley Beach.

"I was in third place when that wave came through. One of the (Kwiecinski) twins was sitting on me (trying to prevent a competitor from getting a wave). She wanted to go left. I went right and got the 9," said Peterson, who is home-schooled. "It's been an interesting weekend. My sister drove me up here and her car broke down Saturday night, so we had to stay up here, but it all worked out."

Keenan, who competed in the inaugural Belmar Pro in 2003, also had a great weekend. Though he fell in the Pro Division in a stacked heat in the Round of 32, he took the Masters Pro title with sharp surfing on both his forehand and backhand.

Keenan took a job as a sales rep with Nike two years ago and his time on the road doesn't leave as much time to surf as it used to, so he relished the win.

"Being retired from professional surfing and working for Nike is actually more rewarding than I ever thought. My focus has become being a great provider for my wife, Lauren, and daughter, Madison," Keenan said. "This week, I tried to fit in surf sessions before and after work with (Ocean City pro) Rob Kelly and it really got me fired up. It's nice to work for something and achieve it. I was really stoked to get waves in the excellent range in that final and the win feels really good."

Keenan beat second place Dean Randazzo, 45, of Somers Point, 15.40 to 11.60. Randazzo has been a threat at Belmar year in and year out. He remains the only New Jersey surfer to have ever qualified for the Men's Association of Surfing Professionals World Tour.

This year, surfing against competitors half or a third his age, he powered into the semifinals of the Pro Division, before being eliminated.

This year also marked a first for Surf City's Randy Townsend, a 10-year veteran of the Belmar Pro and the captain of the Harvey Cedars Beach Patrol.

He advanced to the Pro Division final surfing against some tough competition, including California's Matt Pagan, Ben Graeff of Longport, Aaron Cormican of Florida, Chris Tucker of Florida and Randazzo.

Townsend slashed four turns on a small frontside wave to get to the final where he eventually fell in a heat of all past Belmar Pro champs - Ben Bourgeois, 34, of North Carolina, Vince Boulanger, 24, of Maryland, and Michael Dunphy, 23, of Virginia Beach, Va. Bourgeois won, while Townsend finished in fourth place.

"I can't believe it's been 10 years already," Townsend said. "I'm just thankful to have made a final."

The ASP Fins Pro Junior was also held at Belmar on Saturday. Sam Orozco, 20, of Dan Point, Calif., took his high-flying aerial repertoire to his first ever pro final and win.

Michael Ciaramella, 19, of Stone Harbor also made the final, a noteworthy milestone in his last season as an ASP Junior surfer. Ciaramella returns to the University of San Diego this week for his sophomore year of college.

Few South Jersey surfers are making a push in competitive pro surfing beyond the Garden State these days.

School got out last week and thousands of high school students flocked to New Jersey's beaches.