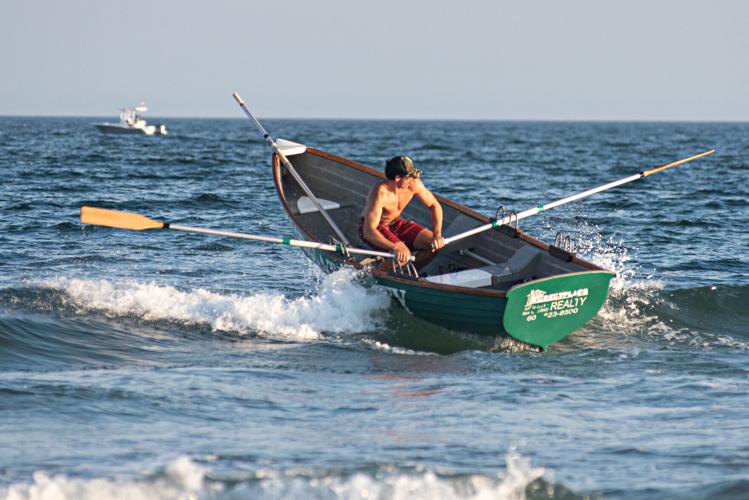 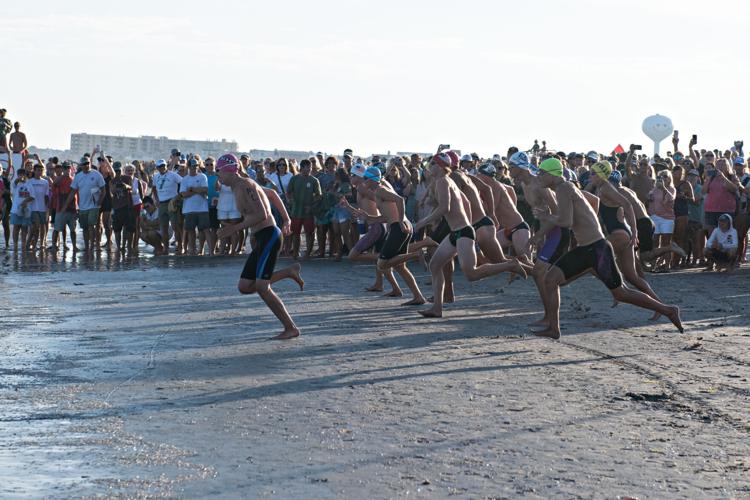 Competitors sprint toward the water at the start of the swim. 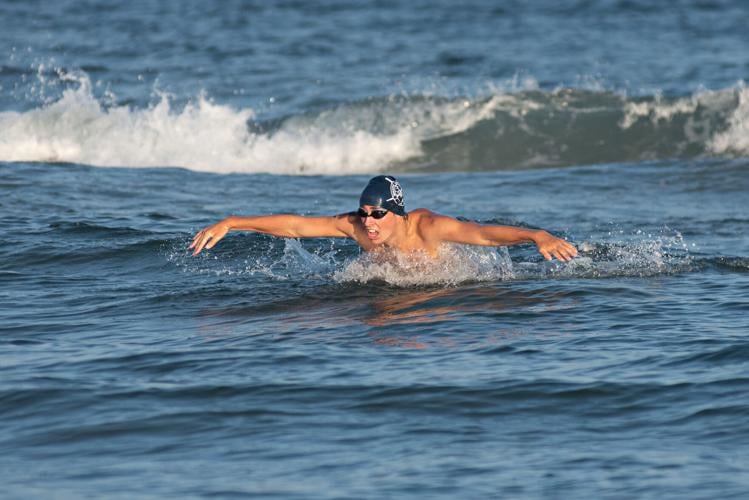 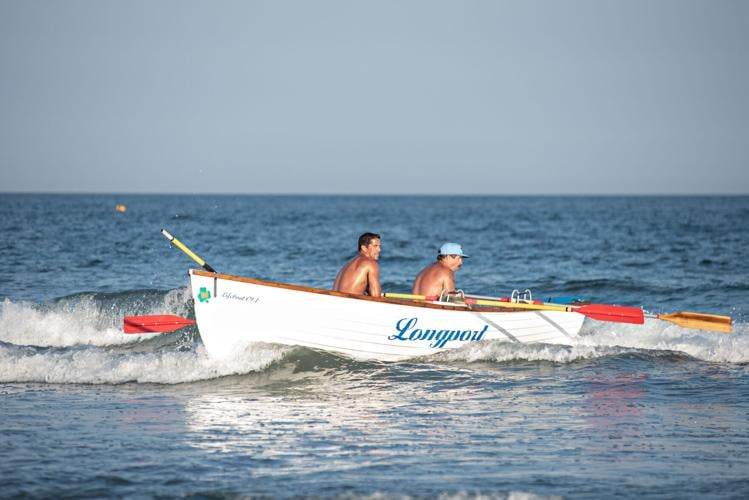 MARGATE — The Margate Beach Patrol did not win any races Friday, but the patrol finished second in each of the three events.

That was enough to celebrate on its home beach.

Margate won with 12 points. Longport was second with 10 points. Avalon and Atlantic City each had six. Atlantic City took third on a tiebreaker after placing higher in the doubles row.

“It’s just great to do in front of the home crowd,” said Margate’s Chris Spiers, who was second in the singles row. “That’s what you’re hoping for.”

Spiers added the ocean was a straight pull.

“It was another great race,” Spiers said. “It was a flat ocean (Friday night), so you really get to see who is rowing out there. Mike (McGrath of Longport) also rowed (the doubles), and he crushed it again.”

The South Jersey races are always hosted by the previous summer’s champion, and Longport has won the title five consecutive years (2016-19, 2021).

As the leading boats in the doubles row were about two minutes from the finish line, Margate, Atlantic City, Longport and Avalon were right with each other. Sea Isle pulled up close as the boats approached the shore.

Duffey and McGrath won the race in 15:47. Margate’s Hayden Smallwood and Bob Bechtel were second in 15:56. Atlantic City’s Sean Blair and Rick Blair were third (16:02).

Duffey cooled off in the ocean after the intense race. Both like conditions a little choppier, but it was still a great row, Duffey and McGrath said.

“It was a hard pull. Age is starting to catch up to me, it felt like,” said Duffey, 39. “We just tried to keep (the row) smooth on the way in. we picked it up on the way in. Hats off to those guys. All these crews are getting fast and faster each week. Next week (at the South Jersey’s) will be a (heck) of a race.”

“It gets tougher as you age,” the 36-year-old McGarth said. “Margate, AC, they all brought it. It was a great race.”

Duffey and McGrath have never won a doubles row at the South Jersey races. The duo has been partners for 18 years.

“That’s the No. 1 goal,” Duffey said. “It’s the one race that has eluded us over the years. We’ve won every race but that one. We are going to be focused this week.”

Added McGrath: “That’s the one we’ve been waiting for for 18 years. Hopefully this year we can get it.”

“We only have one more to go, which is the (South) Jerseys,” Grisbaum said. “That’s the biggest one, so nothing else really matters this entire summer. This was a nice little warm up for the big one next Friday night.”

Grisbaum added Friday’s race “was a great indicator where I am mentally and physically, and I am happy with the result.”

Water temperatures were nice, but there were a lot of small jellyfish in the water. A lot even washed up on shore. Grisbaum, a rising sophomore at Boston University, said it was uncomfortable.

Grisbaum said he was swimming through “thousands of little beads hitting my face, so that wasn’t fun, but it was nothing too unmanageable to where I couldn’t swim as fast as I can go,” he said.

“I’m just happy to be out here swimming on Friday nights,” Grisbaum added.

Grisbaum has been dominating this summer. In 2021, he only lost three times — all in the Big Three races to Longport’s Joey Tepper, an Egg Harbor Township High School graduate.

Tepper is not guarding this summer.

Grisbaum is now the one everyone wants to beat.

“My mindset is to be in first as early as possible,” said Grisbaum, who wants to be in the lead about 200 to 300 yards. “Just going out fast and holding my lead since everyone is looking at me. Last year it was Joey, this year it’s me. I just try to stay my course and stay away from everyone else in the beginning and let my swimming do the talking rather than myself.”

Competitors sprint toward the water at the start of the swim.