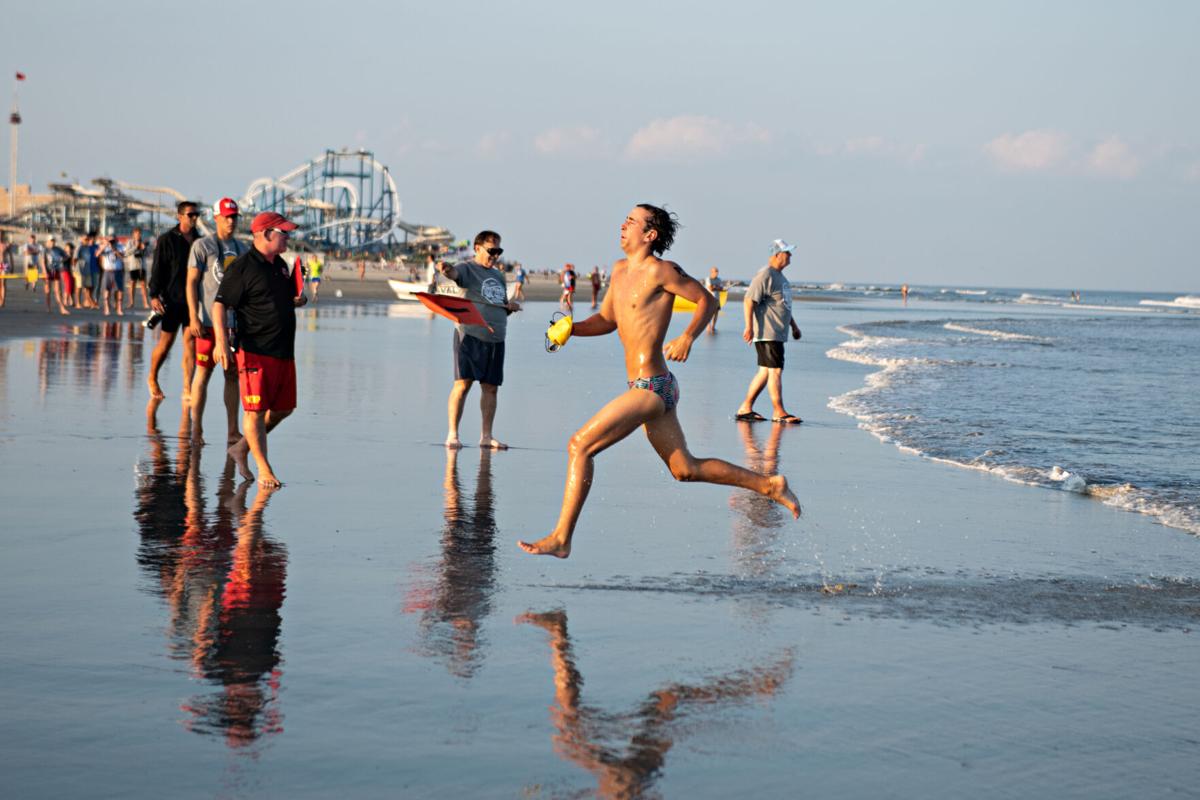 Dolan Grisbaum races ashore to finish second in the swim race for the Avalon Beach Patrol on Friday night at the Dutch Hoffman Memorial Lifeguard Championships in Wildwood. A photo gallery from the event is attached to this story at PressofAC.com. 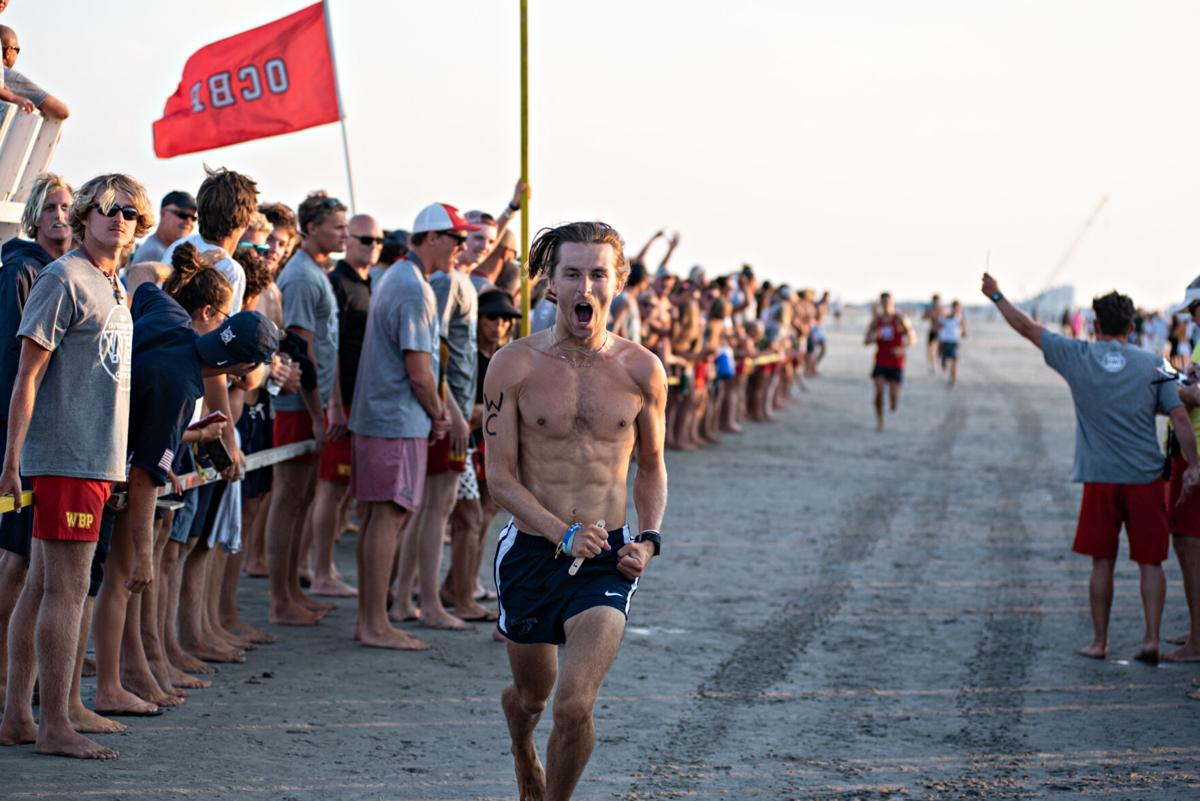 Spectators line the pathway to the finish line for one of the races. 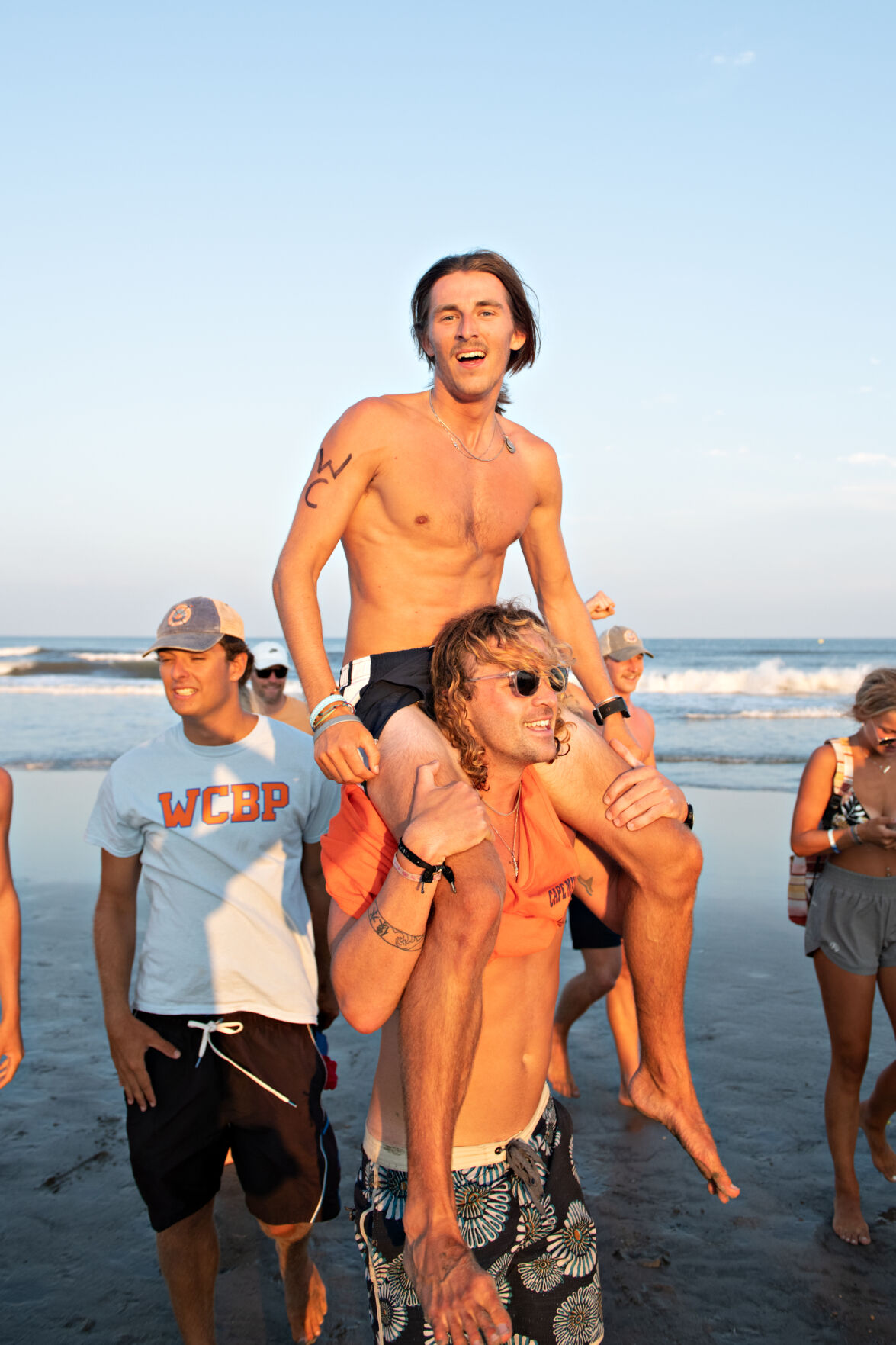 Wildwood Crest celebrates its victory in the 2-mile run at the Dutch Hoffman Memorial Lifeguard Championships on Friday night in Wildwood. Colin Hess won the race in 9 minutes, 45 seconds.

The event featured all 15 beach patrols in the South Jersey Lifeguard Chiefs Association. Longport finished with 20 team points. Avalon was second with 11. Atlantic City and Wildwood Crest each finished with eight.

Atlantic City won the tiebreaker for third place due to a higher finish in the doubles row.

But one of the most anticipated matchups this summer finally came in the swim, the third race of the event, as Longport’s Joey Tepper and Avalon rookie Dolan Grisbaum went head-to-head.

Both are well-accomplished swimmers.

“I’m definitely very happy with (the result),” said Tepper, an Egg Harbor Township graduate and a rising sophomore at the University of Tennessee. “I definitely knew he was going to challenge me a lot. I was nervous about it. I’m just glad I was able to hammer it home.”

Tepper won the paddleboard right before the swim, finishing in 7:20. Brigantine’s Lucas Hatch was second (7:46).

“It definitely tired me out,” he said of the paddleboard race.

Tepper wanted to “hammer it out” on the way in. When the swimmers turned the corner in the ocean, he just barely had the lead over Grisbaum.

“We have known each other for maybe over a decade at this point,” Tepper said of Grisbaum. “It’s a lot different being a rower than being a swimmer. Rowers, they know each other from other beach patrols.

“Swimmers, we know each other from club swimming. It’s just always fun to see people you’ve known for awhile. It makes the race more exciting.”

Tepper was The Press 2020 Press Boys Swimmer of the Year. Grisbaum earned the honor this year and is committed to swim at NCAA Division I Boston University.

Before the event started, they were seen talking by the ocean.

“I’ve been swimming these by myself. Having someone next to me the entire time was nerve-wracking. It (stinks to lose) for the first time this season. But losing is a part of the sport. Obviously, Joey was the better swimmer (Friday). I just have to swim my best next time.”

Grisbaum said it was the best he could have swam, that he was pleased with his performance and happy for his friend.

“I just wanted it to be one and two with him,” Grisbaum added.

Mike McGrath and Sean Duffey of Longport won the doubles row for the second time in the last three years the event was held. But it was an intense battle with Erich Wolf and Jack Glomb of Avalon.

McGrath and Duffey had the lead as the boats were about 200 yards from shore, but Wolf and Glomb caught a wave to put them ahead.

But the two Longport rowers were able to pull ahead near the finish line and cruise to their second victory. They also won the event in 2018.

“I’m tired,” McGrath said with a laugh. “They (Avalon) caught a wave behind us. It was really close. Then we fell off ours. I thought they were going to get us there. It was too close.”

There was a west wind that made it tough to row, but coming to any of the “Big Three” events, “you have to give everything,” McGrath added.

There was a lot of celebration as they came ashore.

“It’s a great team win,” McGrath said. “I mean Joey coming out and winning his two events, that was huge.”

The South Jersey Lifeguard Championships is one of the oldest beach competitions in the country.

Dolan Grisbaum races ashore to finish second in the swim race for the Avalon Beach Patrol on Friday night at the Dutch Hoffman Memorial Lifeguard Championships in Wildwood. A photo gallery from the event is attached to this story at PressofAC.com.

Spectators line the pathway to the finish line for one of the races.

Wildwood Crest celebrates its victory in the 2-mile run at the Dutch Hoffman Memorial Lifeguard Championships on Friday night in Wildwood. Colin Hess won the race in 9 minutes, 45 seconds.