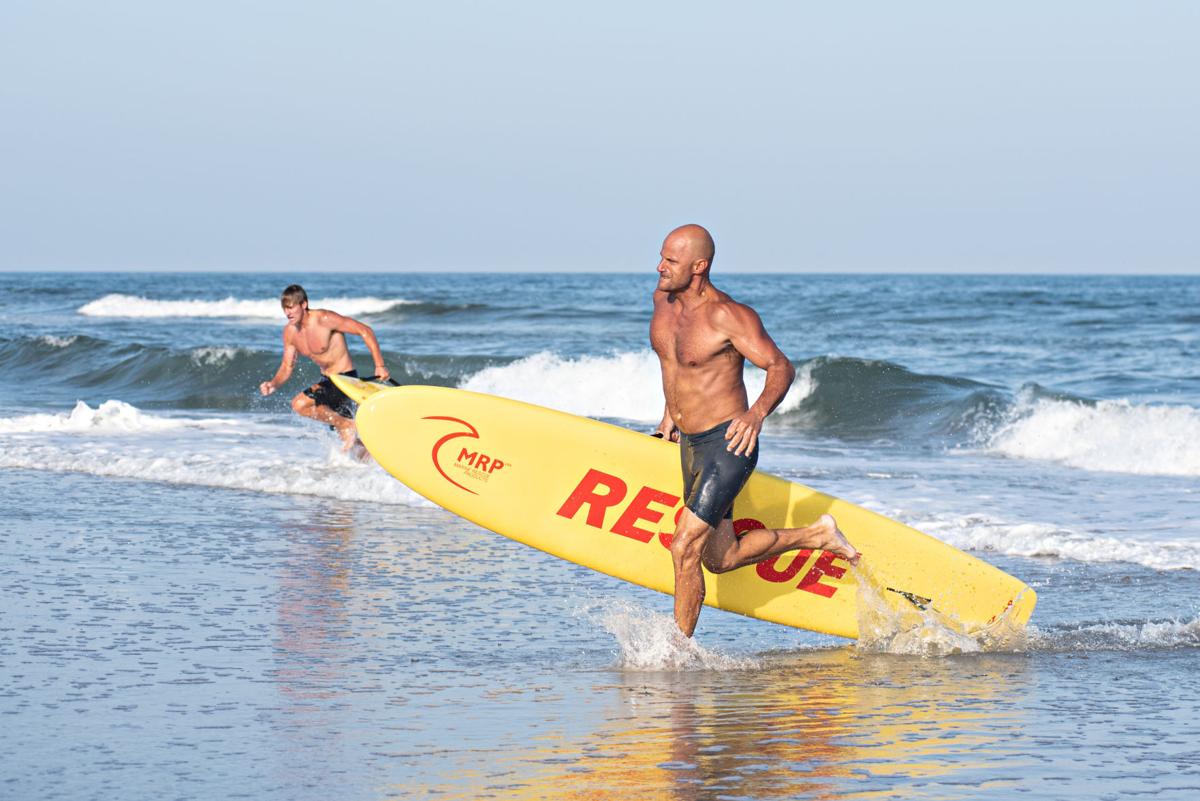 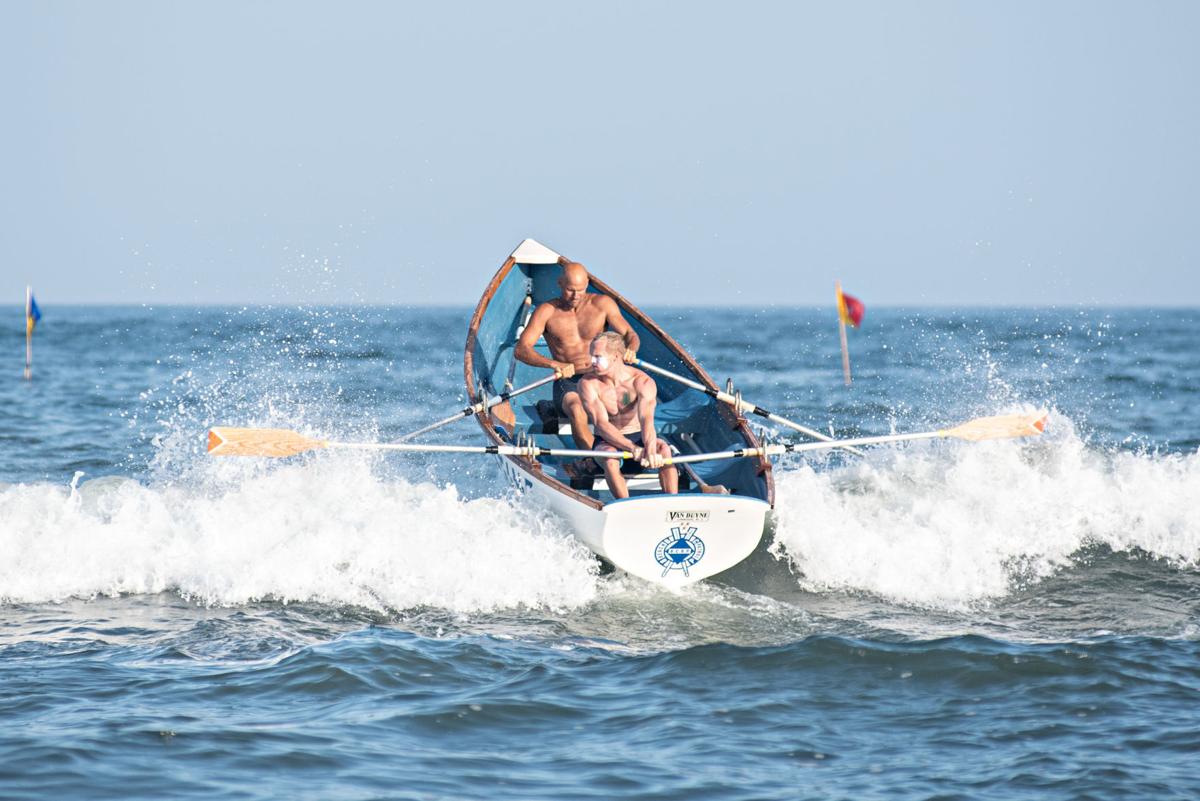 Peltonen (bow) and Sean O’Neill (stern) compete in the final leg of the doubles row relay for Briganine.

BRIGANTINE — It came down to the fifth and final race Tuesday.

Five beach patrols competed (Brigantine, Atlantic City, Ventnor, Margate and Lavallette, from Ocean County, were the others). All five races were relays to flags about 500 feet from shore and back again. At least one female was required in the first three races (the four-person paddle relay, the three-crew surfboat relay and the four-person swim relay).

Brigantine, Longport and Lavallette each finished with 18 teams points. Brigantine and Longport each won two events (the first tiebreaker). Longport won the title on the second tiebreaker (winner of the last event).

Brigantine and Lavallette were second and third, respectively. After four races, Brigantine led with 15 points. Lavallette had 14, Longport 13.

“It’s really nice. It’s always exciting when it comes down to close finish like that,” said the 6-foot-5 Tepper, who was a standout swimmer at Egg Harbor Township High School and was The Press Boys Swimmer of the Year as a senior in 2020.

“It’s no fun if one beach patrol just dominates everyone else. It makes it more exciting to win with close competition.”

The rescue involved swimmers, a paddleboarder and a two-person crew. Each lifeguard had to bring back the previous guard from the ocean in a simulated rescue.

Tepper was the second to swim out. His job was to rescue teammate Katie McClintock, a recent graduate from Mainland Regional and the 2021 Press Girls Swimmer of the Year.

Also competing for Longport was Atlantic City rising senior and swimmer Megan Fox. Max Mittelman was the paddleboarder, and the crew team was Mike McGrath and Sean Duffey, who rescued Mike Wojciechowicz.

Longport also won the event in 2018. Brigantine won the team title in 2019, the last time the event was held. Nearly all lifeguard races were canceled in 2020 due to the COVID-19 pandemic

“I have a lot of respect for the rescue swimmers. It’s really hard,” said Tepper, who is a rising sophomore swimmer at the University of Tennessee and helped Longport win the last two events. “I train heavy, so it’s not really crazy, but it still tires you out.”

Longport easily won the iron man medley relay (a swimmer, a paddleboarder and a doubles crew). Tepper was the swimmer, Mittelman was the paddleboarder and Joe Costa and Tom Kresz rowed the final leg of the race. Costa and Kresz finished about 300 feet ahead of Lavallette.

“It was a team event, obviously,” Costa said. “I was in the anchor leg, so with Joey Tepper swimming and Max Mittelman on the paddle, two of the best on the patrol in what they do, Tom Kresz and I had to maintain the lead and make nice, easy strokes.

“Big-time (win) for everyone here. Most important thing is we are all having fun.”

Brigantine’s Sean O’Neill, Grace Emig, Will Hoffman and Sven Peltonen won the paddle relay. The race, which was the first event, came down to the end.

Just before they reached shore, Peltonen was right behind the last paddleboarder for Lavallette, who was being knocked over by a wave. Peltonen, however, caught that same wave and got to shore first.

The ocean was warm and the weather beautiful, Peltonen said. Temperatures were in the low 80s when the race began.

Peltonen has been a lifeguard with Brigantine for 30 years.

“Coming out with a win in the first race is always good,” Peltonen said. “I’m just happy to be here and grateful to be racing with all my great friends and these beach patrols.”

O’Neill and Peltonen, who have been rowing partners for the last couple of summers and trained together this spring, were the last Brigantine pair to row to shore, capping their patrol's victory in the race and earning five more team points. Atlantic City finished second to earn four points.

“We had tough competition there. Minimal waves, so you’re not working with much,” said O’Neill, 29, of Brigantine. “We just kind of adjusted while we were out there. Got to pay attention to your course flag on the land and trust your rowing partner."

“It was a pretty good day to swim,” Dupree said. “Pretty choppy at some points. I don’t know why it was pretty good. Pretty sunny, so you were able to see the flags pretty well. It was a good day to come down here and have the tournament.”

ROBBINSVILLE — Come 2022, New Jersey high school athletes may be able to run sports camps or give lessons for money and not jeopardize their a…

BUENA VISTA TOWNSHIP — Kenny Selby even surprised himself with his touchdown Friday.

MILLVILLE — After taking over this season for her grandmother, longtime coach and area legend Claudia McCarthy, Corrine Etter-Veight earned he…

ATLANTIC CITY — As David Morris made his way down the Boardwalk, he noticed random people out for a stroll stopping to yell out words of encou…

The Ocean City High School boys soccer team waited an extra-long time for its season to begin, but the Red Raiders made up for it Monday.

Peltonen (bow) and Sean O’Neill (stern) compete in the final leg of the doubles row relay for Briganine.