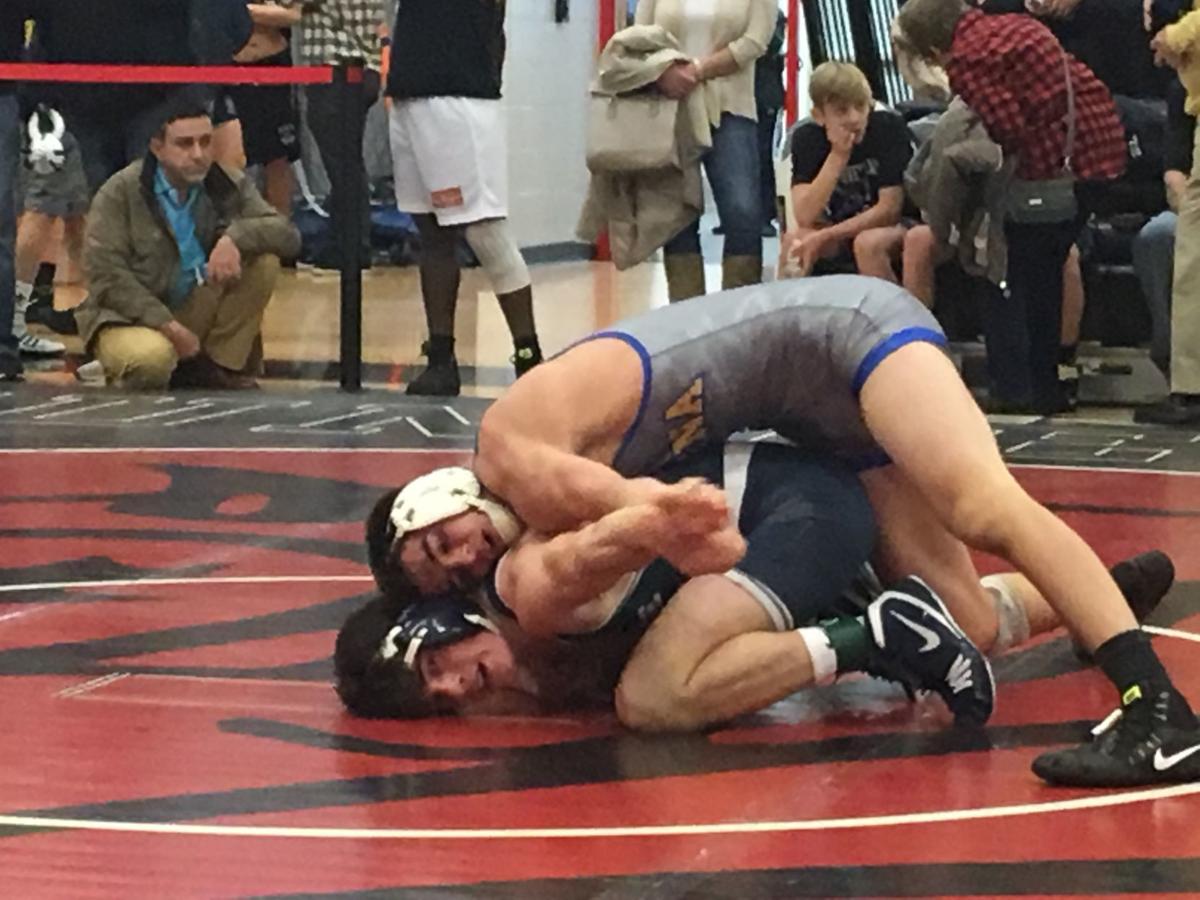 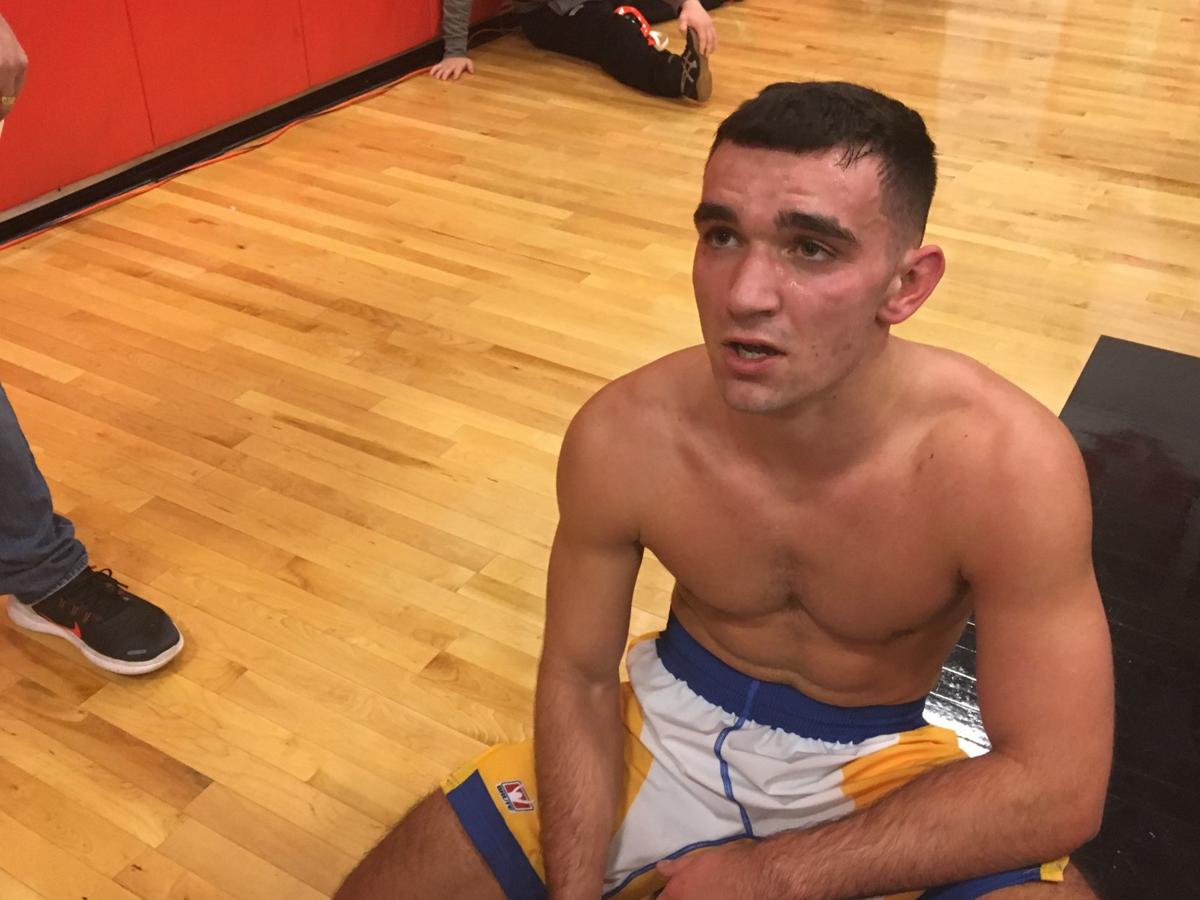 ‘It’s no one’s fault. It’s just a rule. His hair was too long, and (the haircut) was what happened. If my hair was too long, it would have been cut, too,’ Buena Regional wrestler Luke Souder says of reaction to teammate Andrew Johnson getting his dreadlocks cut off during a match. 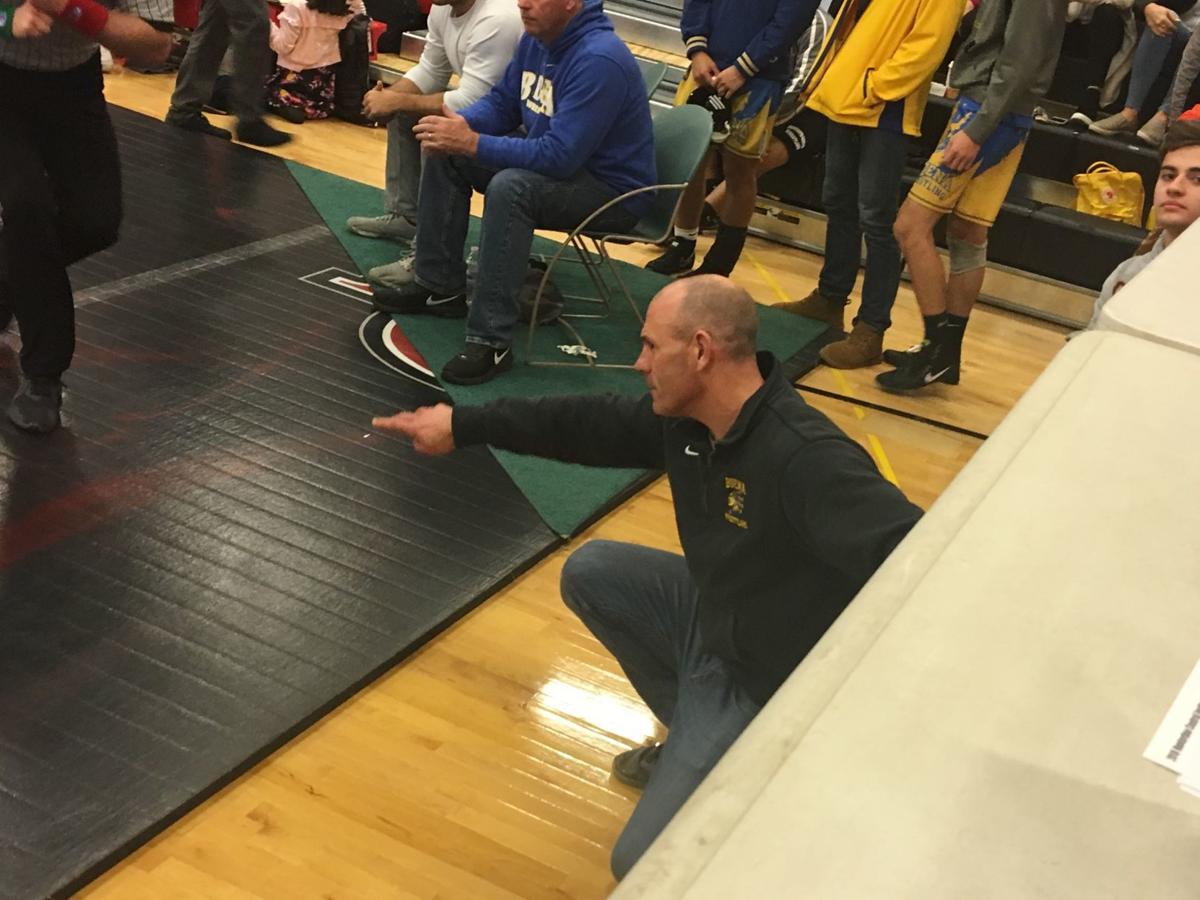 Buena coach George Maxwell gives instructions to a wrestler Thursday during the Hunterdon Central Invitational. Video of Johnson getting his haircut showed Maxwell looking on.

The six black-and-red mats that covered the gym floor provided relief from the chaos that has swirled around Buena’s program in the wake of a viral video that showed Chiefs 120-pounder Andrew Johnson having his dreadlocks cut off just before his bout against Oakcrest a week ago.

Finally, they were able to just wrestle again.

“This whole thing has brought us together as a team,” senior 152-pounder Ryan Clark said after winning his second-round match at the Hunterdon Central Invitational. “We’re like a band of brothers fighting through adversity, through unnecessary pressure. And Andrew is in the band.”

Buena school board 'troubled' by video of wrestler's haircut

That said, Johnson and his brother, freshman 106-pounder Nate Johnson, did not compete Thursday. Parents Rosa and Charles Johnson were also not in attendance.

Buena coach George Maxwell declined to comment on the situation.

Clark was among six varsity wrestlers the Chiefs had at the 16-team tournament, which is considered one of the top holiday events in the state. He was joined by senior Chris Doughty (160 pounds), junior Austin Rickert (132), senior Jaden Roberts (182), senior Luke Souder (138) and sophomore Tom Thompson (220).

“I’ve known Andrew since I came to Buena in first grade,” Clark said. “From the bottom of my heart, we would take a bullet for each other. He’s being a trooper about everything. This whole thing had been blown out of proportion, but it doesn’t seem to affect him.”

The haircut was reportedly ordered by veteran referee Alan Maloney, who refused to let Andrew Johnson wrestle because he did not have a legal hair cover when he took the mat against Oakcrest.

The state Division of Civil Rights has opened an investigation into the incident. Maloney is suspended awaiting the results of the NJSIAA’s investigation.

Amid the bustle of a seven-team wrestling tournament at Gloucester City High School, Absegam…

The rule was changed a few years ago, requiring the hair coverings to be attached to the headgear.

Johnson did not have that type of hair cover last week.

“He didn’t have the cap that attaches,” said Souder, who won his first-round bout Thursday via decision. “I guess he didn’t know he had to have one. It’s no one’s fault. It’s just a rule. His hair was too long, and (the haircut) was what happened. If my hair was too long, it would have been cut, too.”

A week earlier, Johnson and the Chiefs had competed in the Robin Leff Tournament at Southern Regional High School in Stafford Township.

It was not known whether the hair cover he wore was attached to the headgear, but he was not penalized or reprimanded.

“I don’t remember if he had one or not, but I know it wasn’t an issue for us,” Southern coach John Stout said Thursday at the Hunterdon Central tournament. “I don’t get why this has turned into such a big deal. You are responsible for having the proper equipment. Having the right hair cover is the same as having your shoelaces taped (so they don’t become untied). It’s a rule. But it should have been taken care of in the locker room room before the meet.”

According to Stout, referees are supposed to attend prematch weigh-ins, but those are frequently handled by the respective coaches. Referees also conduct a prematch meeting with teams in which fingernails, facial hair and hair length are examined.

In a statement released Monday by Johnson family attorney Dominic Speziali, “The referee here (Maloney) was late to the meet and missed weigh-ins. When he did evaluate Andrew, he failed to raise any issues with the length of his hair or the need to wear a head covering.”

After the haircut, Johnson won his match in sudden overtime to help Buena earn a 41-24 victory over Oakcrest. Fans gave him a standing ovation as Maloney raised his arm and teammates were quick to congratulate him.

Frankel posted the video on Twitter under the title “the epitome of a team player.”

“That’s exactly what it was,” Clark said. “Every single one of us was so proud of (Johnson).”

A number of athletes, celebrities, civil rights advocates and politicians, including Olympic champion wrestler Jordan Burroughs, Chance the Rapper, film director Ava DuVernay and Gov. Phil Murphy, expressed their anger and frustration over what they viewed as a racist act.

On Thursday, representatives from Philadelphia-area TV stations showed up at Hunterdon Central.

“We are entertained by the media,” Souder said. “We know that it wasn’t that big of a deal, then the next day someone said (the video had gone viral). I think they were joking. I was like, ‘No way.’

The state attorney general is investigating the death of a man in custody at the Atlantic County jail, a spokesman for the office confirmed. M…

A judge has dismissed a lawsuit against the Buena Regional School District by Alan Maloney, the wrestling official who made a student cut his …

‘It’s no one’s fault. It’s just a rule. His hair was too long, and (the haircut) was what happened. If my hair was too long, it would have been cut, too,’ Buena Regional wrestler Luke Souder says of reaction to teammate Andrew Johnson getting his dreadlocks cut off during a match.

Buena coach George Maxwell gives instructions to a wrestler Thursday during the Hunterdon Central Invitational. Video of Johnson getting his haircut showed Maxwell looking on.