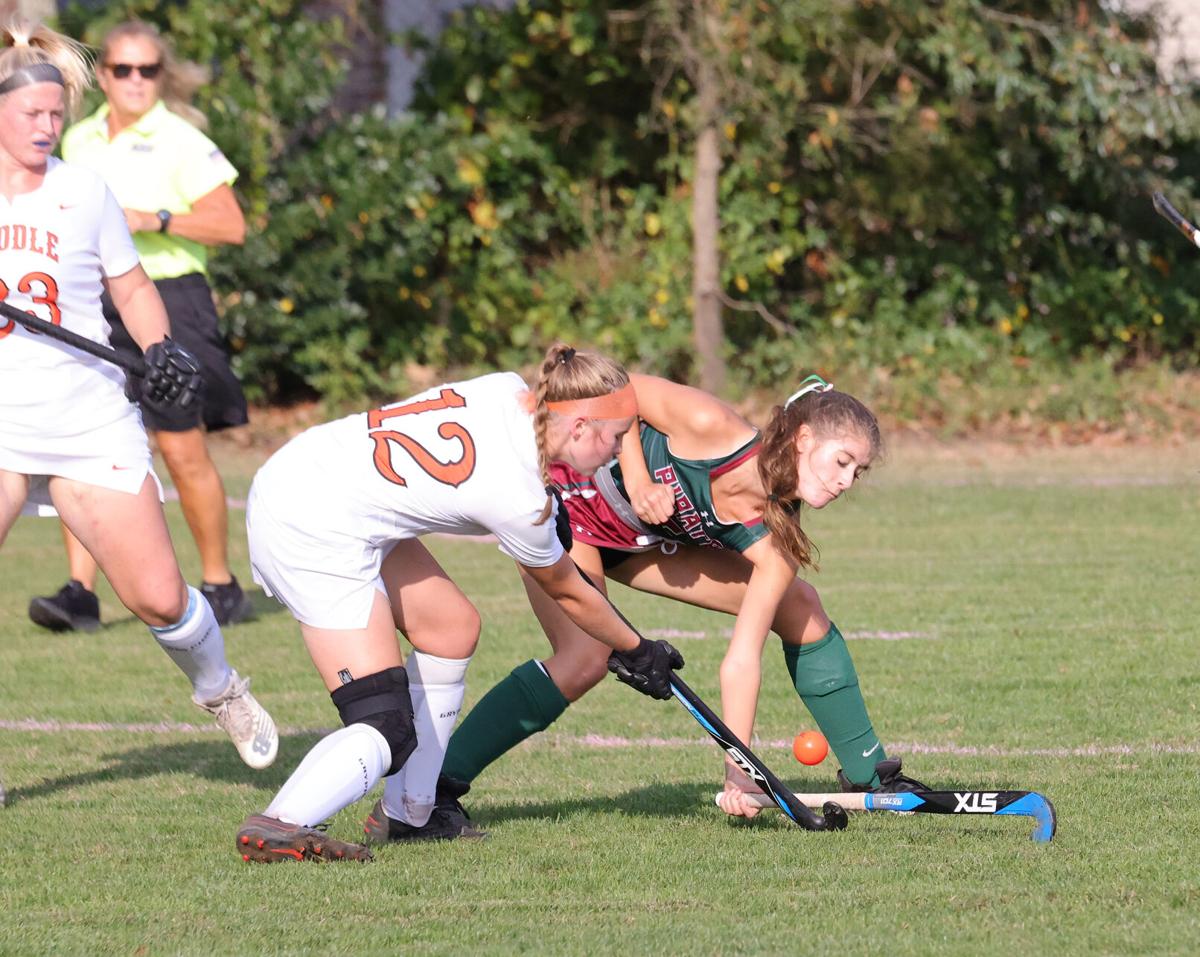 Middle Township’s Jax Pickering, left, battles for the ball with Cedar Creek’s Rachel Dutton during the first half of their game Thursday in Cape May Court House. 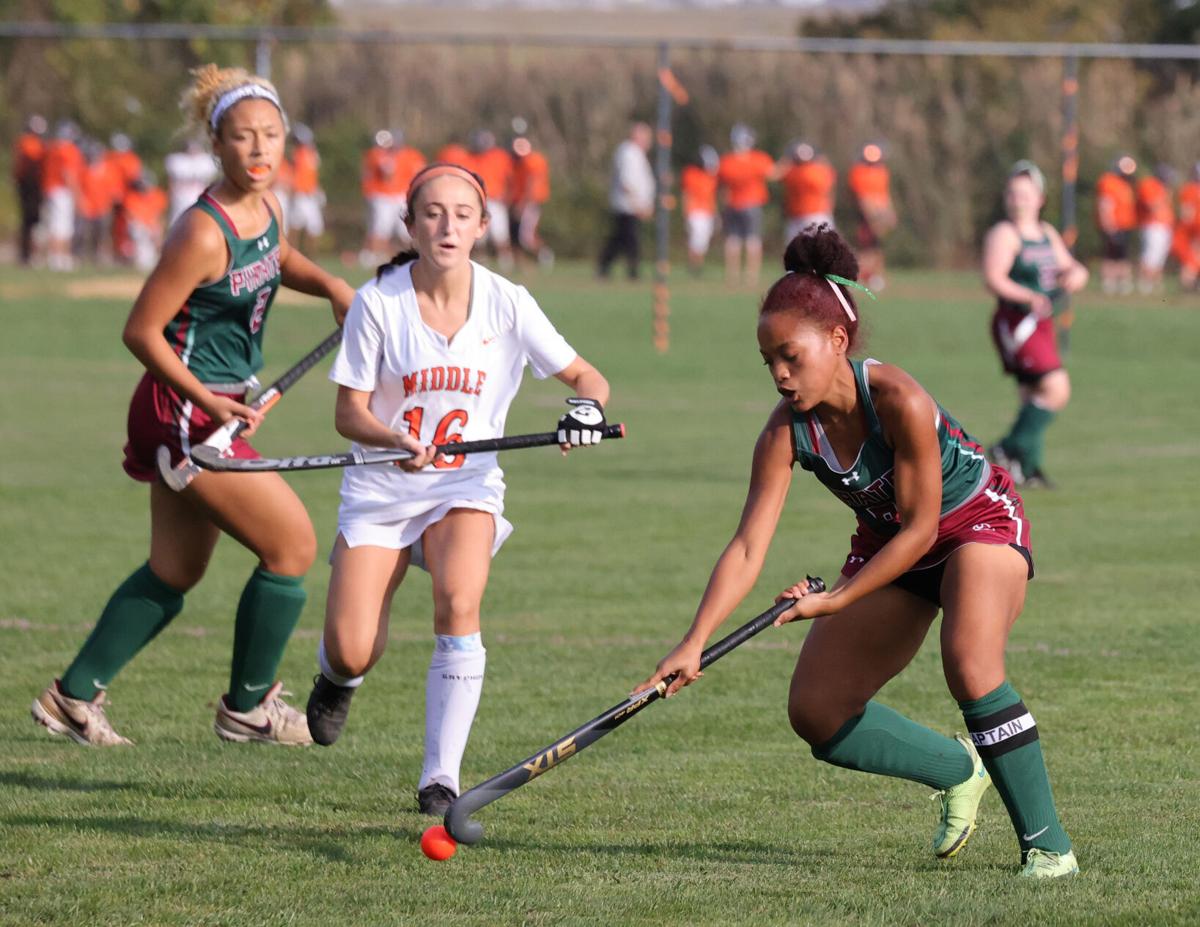 Cedar Creek's Cereya Lee, right, drives past Middle Township's Maddy Scarpa  during the first half of their game Thursday in Cape May Court House.

But the result proved to be important.

The senior scored with three seconds remaining in the second quarter to lead the Cedar Creek High School field hockey team to a 4-2 victory over Middle Township in a Cape-Atlantic League National Division game Thursday.

After her goal, the Pirates (8-5-1) led 3-2 at halftime. Dutton also scored in the fourth quarter.

“That was great,” said Dutton, 17, of Port Republic. “Once we get that stamina in us, it keeps going the whole game.”

And that momentum carried into the second half.

Middle (3-9-2) did not score another goal as the Cedar Creek defense was solid in the final two quarters. The Panthers had five shots on net in the second half and a few corners, but an attempted comeback never came to fruition.

“My defense, due to injures, some people were moved around,” Cedar Creek coach Heather Martin said. “But my defense, I would put money on is one of the top in Atlantic County.”

Cedar Creek had three corners and other scoring opportunities in the opening five minutes, but were unable to capitalize.

With 6 minutes, 27 seconds remaining in the first quarter, Chloe Breakell scored for the Panthers. It was the team’s first shot on net, and just like that Middle took an early 1-0 lead.

But the Panthers responded in the second quarter.

Riley DeMarco scored off an assist from Ava Hammonds early in the quarter, which tied the game 1-1. Five minutes later, Olivia Torres scored and DeMarco assisted, giving the Pirates a 2-1 lead.

“Honestly, we usually get back once we see that we are kind of down,” Dutton said. “We lift up each other as much as we can, which really improves our play. Once we come together and realize we need to bring ourselves up, that’s when our game comes back.”

However, just one minute later, Middle’s Jada Nagle scored off an assist from Gwen Boal to tie the game 2-2. Four minutes later, with only seconds remaining, it seemed that would be the halftime score.

But Dutton had other ideas.

DeMarco sent her a pass near the right side of the cage, and Dutton was able to get the shot between the goaltender’s legs. Dutton also scored off an assist from DeMarco just 15 seconds into the fourth quarter to cap the scoring. DeMarco finished with a goal and three assists.

“Those two work so nicely together,” Martin said about DeMarco and Dutton. “Riley is coming off an injury, and is still injured. And (Thursday) they made that reconnection.”

Dutton said DeMarco is one of her friends on the team.

“We were so excited (going into halftime), and we just kept going with it,” Dutton said. “Then we held them. It was nice.

“The game was great. (Middle) is a really good team. They have a lot of really good players. I honestly couldn’t have asked for a better game from my team. It was a comeback win. We had a couple tough losses the past few games. But this definitely brought us back up. It was a really good game.”

Cedar Creek started the season 6-2. But the Pirates have recently been dealing with some injuries, entering Thursday’s game 1-3-1 in their last five games. But Thursday “was their comeback game” with players back in their usual positions, Martin said.

The goal now is to keep bringing the same intensity the rest of the season, Martin added.

“Even though they are still hurt, they played like a team,” the coach said. “They were there for each other. They were cutting through. They were finishing the ball. They played as a team. They looked like the old Creek team that was winning all our games.”

“I feel good (about the game Thursday),” Martin said. “We are back on our ladder now, and we are going to keep climbing.”

MILLVILLE — It was the 150th meeting between the Millville and Vineland high school football teams, so it seemed fitting that history was made…

St. Joseph caps season with a win over Winslow Township

WINSLOW TOWNSHIP — Kevin Mayfield didn’t know exactly how to explain what his St. Joseph Academy football career meant to him.

HAMMONTON — Emily Nelson had plenty of reasons to smile Wednesday.

Middle Township’s Jax Pickering, left, battles for the ball with Cedar Creek’s Rachel Dutton during the first half of their game Thursday in Cape May Court House.

Cedar Creek's Cereya Lee, right, drives past Middle Township's Maddy Scarpa  during the first half of their game Thursday in Cape May Court House. 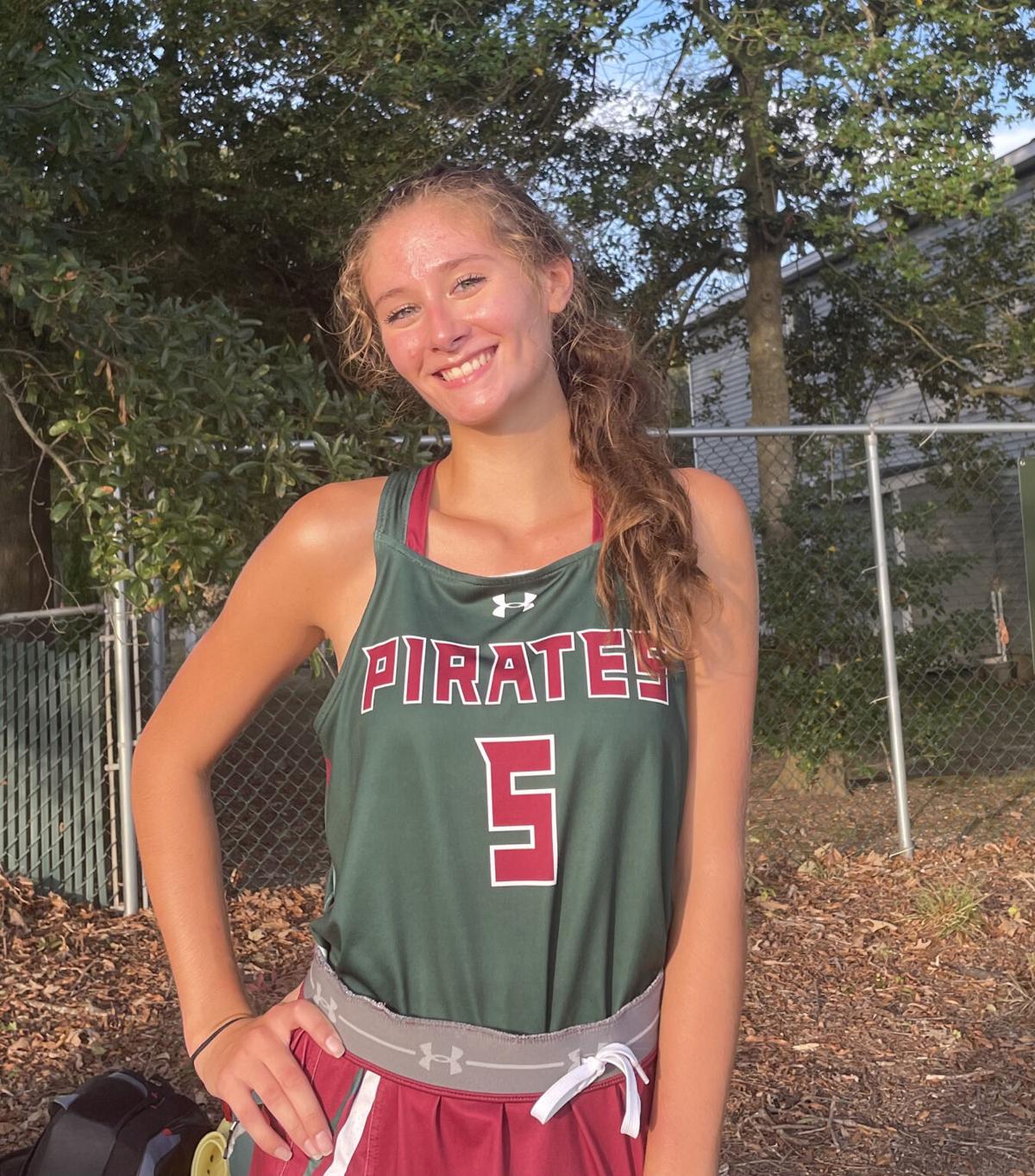