They’ve made her faster and more motivated than ever.

A little more than 10 months after giving birth to her son, Titus, the 2006 Pleasantville High School graduate won the 60-meter hurdles at the world indoor track and field championships in Oregon on March 18. Ali is a contender to make the U.S. Olympic team this summer .

“Before my son I wanted it for myself,” Ali said. “But now I just want to be great and give my son something he can look back on. I just have a different mindset than I had before.”

Ali took a victory lap around the Oregon Convention Center track after her win. The American flag was draped over her shoulders. She held Titus in her arms.

“It was one of those things, you hope for and train for,” Ali said, “but when it actually happens you can’t put it into words.”

Ali, 27, lives in Los Angeles, where she trains at the University of Southern California with her coach Ryan Anderson, who is also world-class hurdler.

Ali won the 100 hurdles championship at the 2006 New Jersey outdoor track and field Meet of Champions. She still holds the Cape-Atlantic League 100 hurdles record with a time of 13.65 seconds.

Ali will occasionally drop by a Pleasantville practice when she’s on the East Coast. She donates spikes to the program. If one of the Greyhounds needs motivation, Ali will give them a pep talk over the phone.

“She’s like family to me,” Laws said. “She’s like a big sister to a lot of the girls. She’s still a part of Pleasantville.”

After graduating from Pleasantville, Ali became a national and international success. 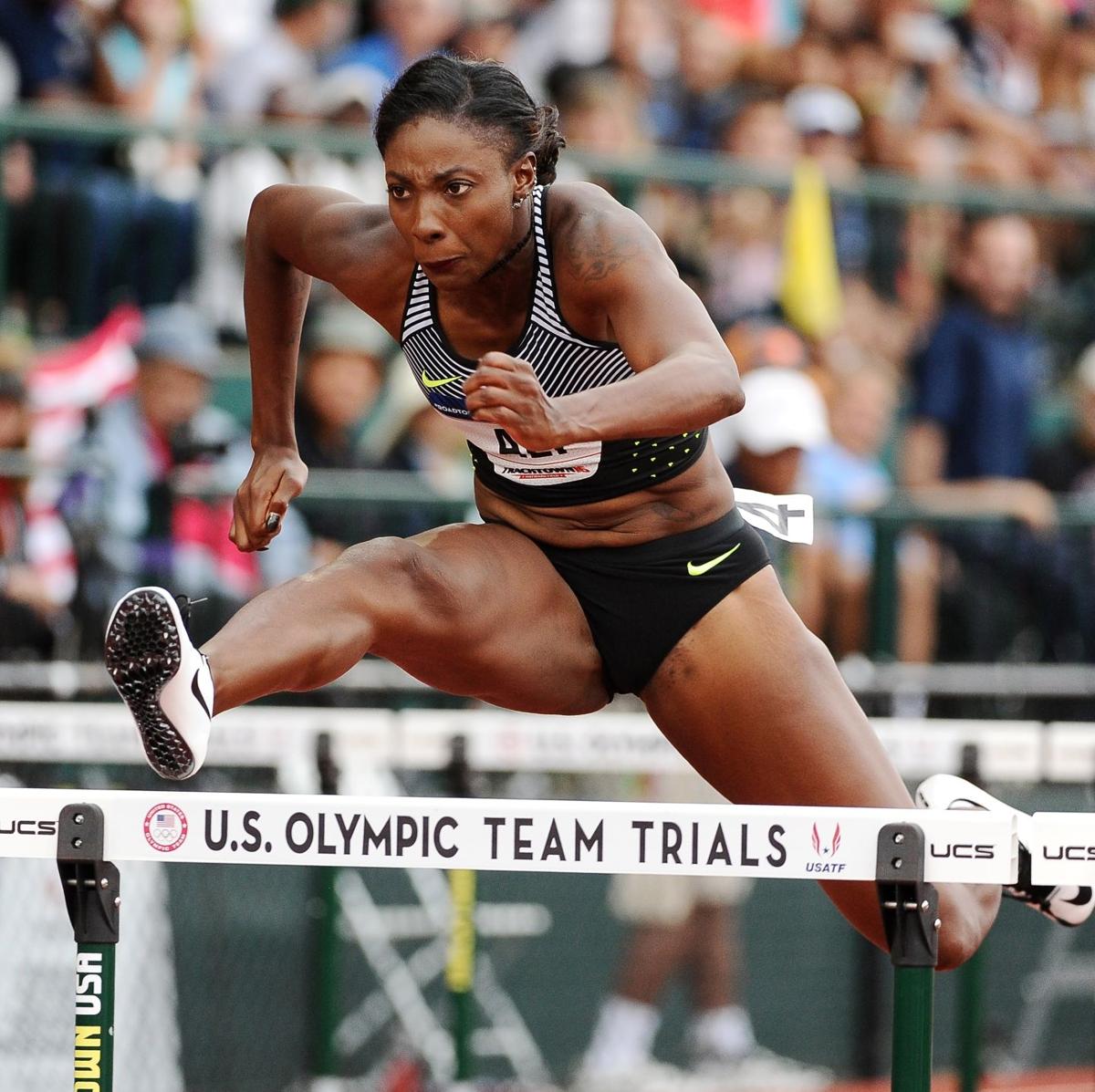 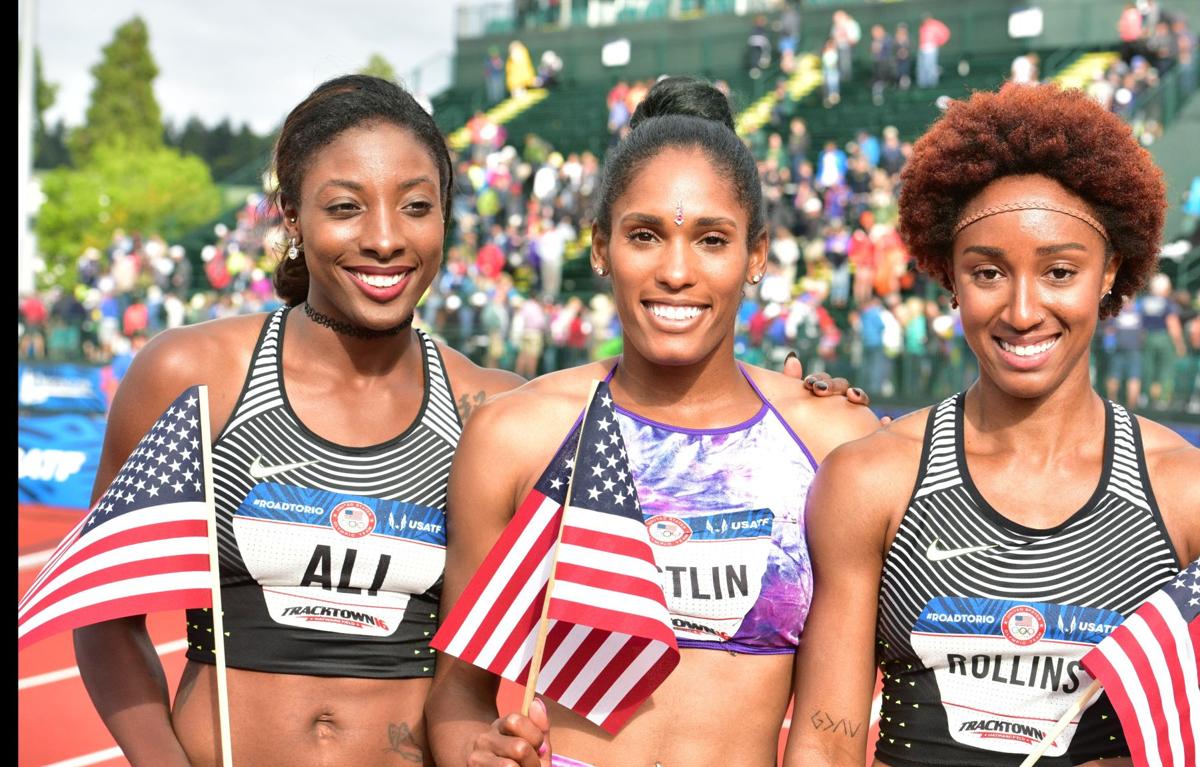 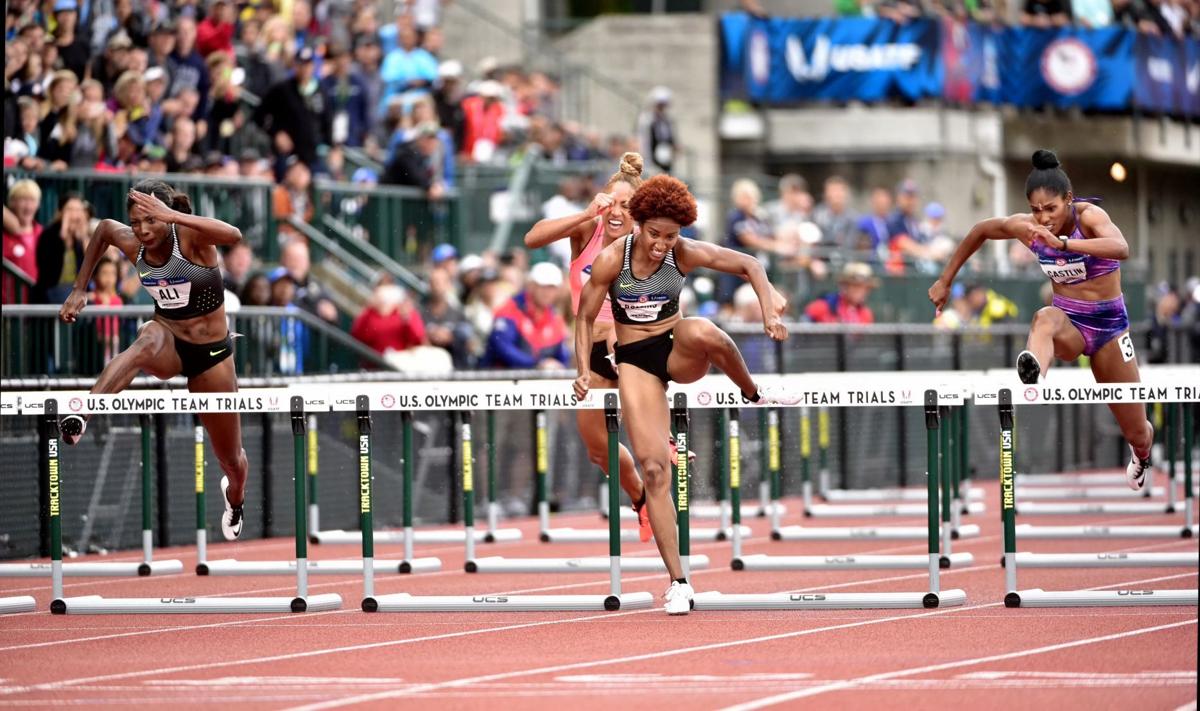 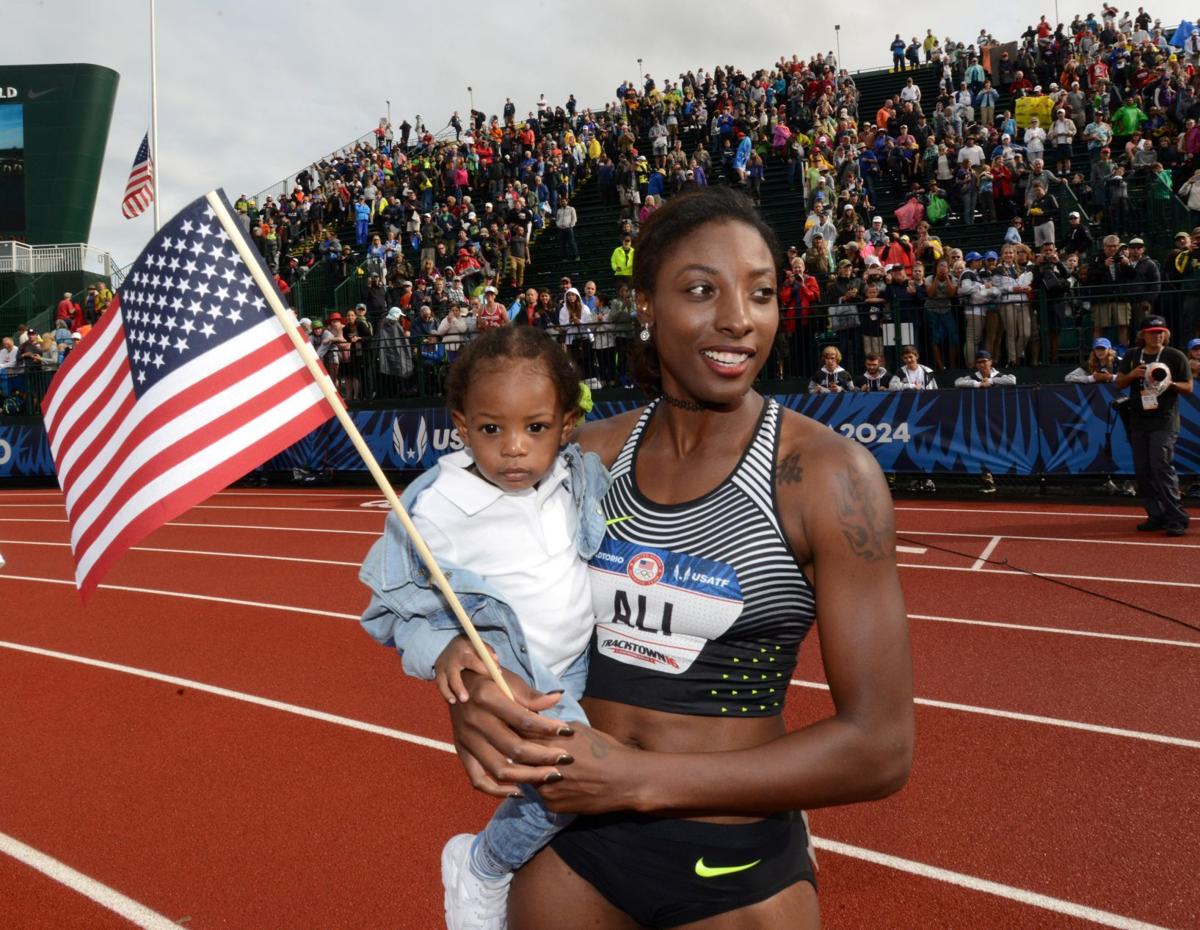 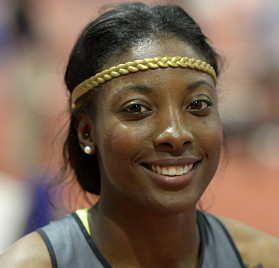 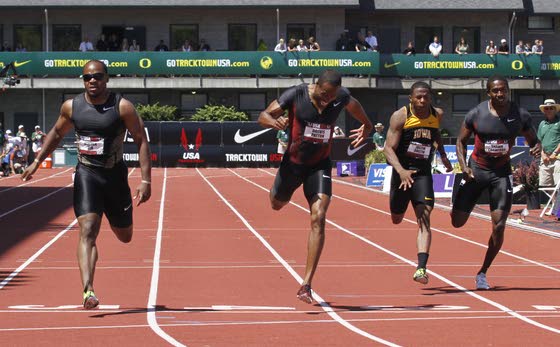 Walter Dix, left, wins the men’s 200 meters ahead of, from second from left, Darvis Patton, Justin Austin and Shawn Crawford during the U.S. track and field championships in Eugene, Ore., on Sunday. 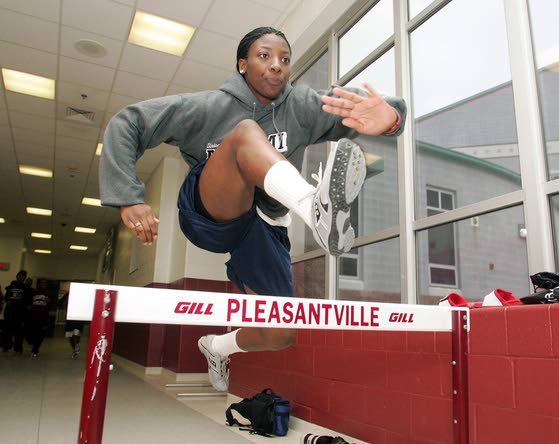 Southern California’s Nia Ali clears the final hurdle during a 100-meter hurdles preliminary at the NCAA outdoor track and field championships Thursday at Drake Stadium in Des Moines, Iowa. On Saturday, Ali won the final, beating seven others in 12.63 seconds. 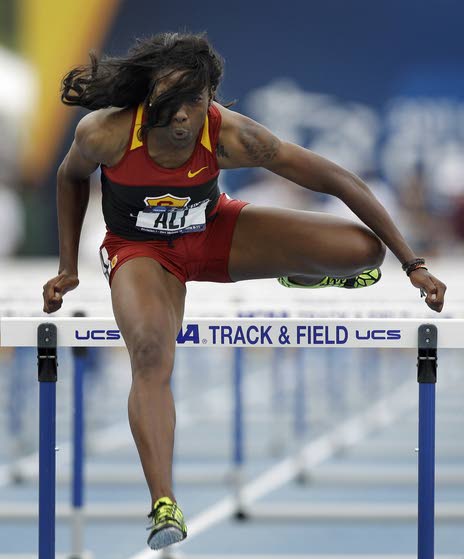 Southern California’s Nia Ali clears the final hurdle during a 100-meter hurdles preliminary at the NCAA outdoor track and field championships in June at Drake Stadium in Des Moines, Iowa. Ali won the final, beating seven others in 12.63 seconds. On Monday, she was selected to represent Team USA at the Pan American Games.

Walter Dix, left, wins the men’s 200 meters ahead of, from second from left, Darvis Patton, Justin Austin and Shawn Crawford during the U.S. track and field championships in Eugene, Ore., on Sunday.

Southern California’s Nia Ali clears the final hurdle during a 100-meter hurdles preliminary at the NCAA outdoor track and field championships Thursday at Drake Stadium in Des Moines, Iowa. On Saturday, Ali won the final, beating seven others in 12.63 seconds.

Southern California’s Nia Ali clears the final hurdle during a 100-meter hurdles preliminary at the NCAA outdoor track and field championships in June at Drake Stadium in Des Moines, Iowa. Ali won the final, beating seven others in 12.63 seconds. On Monday, she was selected to represent Team USA at the Pan American Games.

She won the NCAA 100 hurdles championship while at the University of Southern California in 2011. She finished first in the 60 hurdles race at the 2014 world indoor championship.

But she has also dealt with her share of career adversity.

She missed the 2014 summer with a hamstring injury and got pregnant in the prime of her career in 2015. Titus was born on May 8. His father is 400 hurdler Michael Tinsley, who won the silver medal in that event at the 2012 Olympics. He trains in Texas but often visits Ali and Titus in Los Angeles.

“The first question that came out of everybody’s mouth was, ‘Wait a minute, what about track?’ ” Ali said.

Ali, however, was positive about her pregnancy and her career from the start.

She returned to Philadelphia for the final five months of her pregnancy. She stayed active while pregnant, taking some dance and aerobic classes.

Ali returned to California last August and eased back into training. But training and caring for a baby is not easy. Sometimes Titus will wake up at 1 a.m. and not get back to sleep until 3 a.m. Ali has to start her day at 7 a.m.

“It’s so hard,” she said. “I don’t get much sleep some days. I’m on his schedule. I accepted that. I just have to be mentally strong.”

Ali wasn’t considered one the favorites at the world indoor championships in March.

“I had pressure from myself,” she said, “but I didn’t have a lot of pressure from everybody else because they didn’t really expect much. I wanted to take advantage of not having any outside pressure.”

“Early on in training it was pretty clear to me that this was a woman who would not have a lot of rust,” he said. “When you look at things in retrospect, you think ‘Wow.’ But as far as surprised? No.”

Ali is now training to make the U.S. Olympic team in the 100 hurdles. The U.S. Olympic Trials will be held July 1-10 in Eugene, Oregon. The Summer Olympics are Aug. 5-21 in Rio de Janeiro.

Wilson said Titus’ birth has given Ali a sense of urgency. Wilson said Ali has the ability to not only make the Olympic team but also win a gold medal.

“Her commitment to her training is the best it’s ever been,” Wilson said. “It easily could be the worse it’s ever been because of all the responsibility she has.”

And Ali knows this summer will be about creating memories for two.

“I have an extra edge,” she said. “Although Titus may not know what’s going on now, it will be something good for him to look back on. I want to set the tone for him, other kids and other moms out there.”

Asia Young didn't feel any different sprinting down the long jump runway at the Woodbury Relays on Saturday.

STOCKHOLM - Pleasantville High School graduate Nia Ali continued her quest for a U.S. Olympic spot with a second-place finish in the 100-meter…

Ford Palmer will chase his dreams at the U.S. Olympic Track and Field Trials in Eugene, Oregon, next week.

Nia Ali advanced to the semifinals of the 100-meter hurdles at the U.S. Olympic Track and Field Trials in Eugene, Oregon, on Thursday night.

Nia Ali crossed the finish line of the 100-meter hurdles at the U.S. Olympic track and field trials and immediately clasped her hands together…

Absegami High School alumnus Ford Palmer was more nervous Thursday for his trial run than he was Saturday for the final.

Two track and field runners with local ties are competing this week in the United States Track and Field Championships in Sacramento, Calif.

Nia Ali was sleeping in her North Hollywood, Calif., apartment last Monday when an earthquake measuring 4.4 on the Richter scale rumbled throu…

Isaac Clark knew the the 800-meter run was going to be one of the fastest races at the state indoor track and field Meet of Champions on Saturday.

Only three athletes make the U.S. Olympic track and field team in each event.

Nia Ali, a 2006 Pleasantville High School graduate, will compete in the 100-meter hurdle preliminaries today at the U.S. Track and Field Olymp…

As the Olympic Summer Games getting closer and closer, races are getting better with athletes – hopefully – peaking at the right time.

PLEASANTVILLE - Nia Ali couldn't understand why she couldn't race with the boys. As a high school freshman, she was as fast or faster than man…

On Monday, Pleasantville High School graduate Nia Ali who chosen to represent the United States at the 2011 Pan American Games in Guadalajara,…

Pleasantville High School graduate Nia Ali had a track and field season to remember at the University of Southern California.

Nia Ali, a 22-year-old graduate of Pleasantville High School, finished fifth in the 100-meter hurdles final Sunday at the USA Outdoor Track an…

NCAA champion Nia Ali overcomes nerves, and so does her mom

Nia Ali doesn't remember all the details about her long-ago first attempt at hurdling.

The individual track and field season starts this weekend. There's a boys meet Thursday at Buena Regional and a girls meet Friday and Saturday…