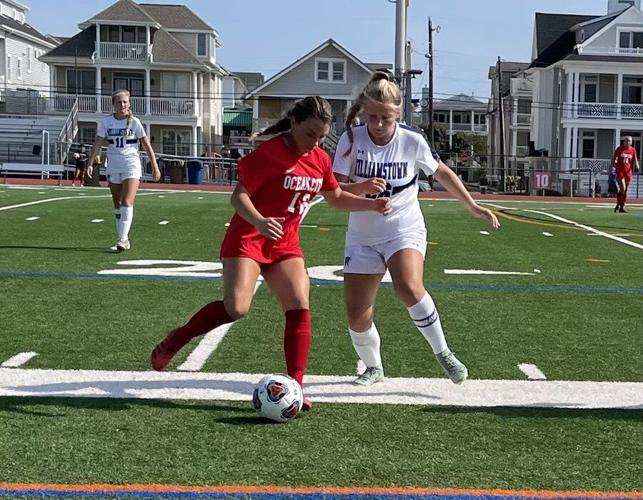 Ocean City’s Katie Maxwell controls the ball Saturday in a game against Williamstown at Carey Stadium. 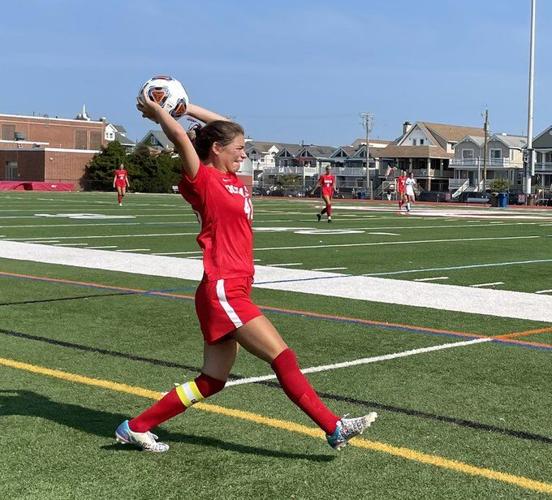 Ocean City's Emily Benson tosses in the ball into play during the first half Saturday against Williamstown. 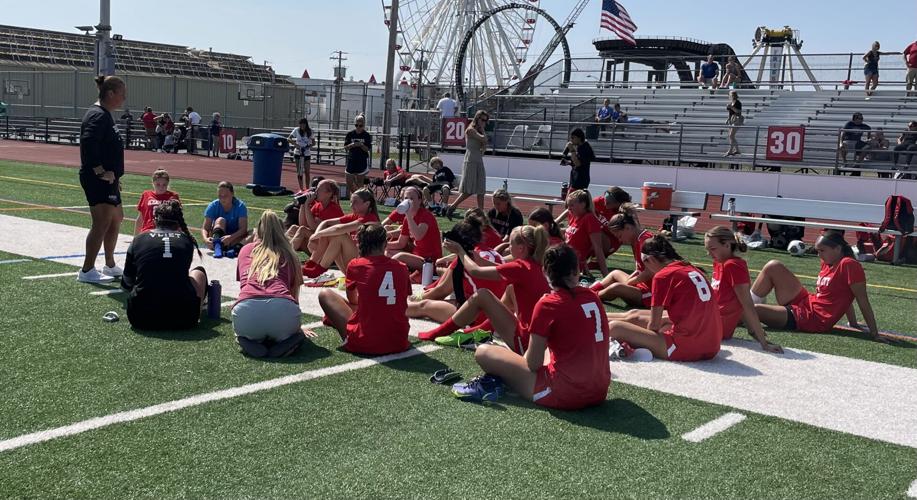 Head coach Lisa Cuneo talks to her team after they defeated Williamstown on Saturday. 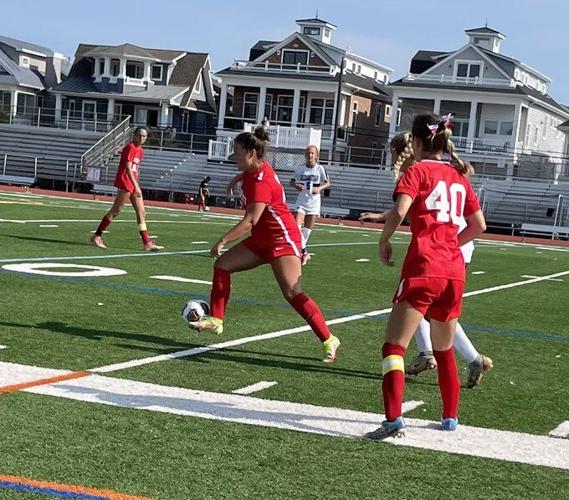 Kiera Schmidt controls the ball Saturday in a game against Williamstown in Ocean City.

Chisholm scored in the 38th minute to lead the Ocean City High School girls soccer team to a 1-0 victory over Williamstown in a nonconference game at Carey Stadium.

The 16-year-old junior had to fight for the ball among Braves defenders but still got the shot off. The goal was even more impressive because she started to fall as she took the shot.

“There were a bunch of people,” Chisholm said. “You have to battle for it. It’s whoever gets the last touch. You just have to touch it. If you fall over, you fall over.”

The Red Raiders (4-0) are ranked eighth in The Press Elite 11. Williamstown (2-2) is consistently one of the best programs in South Jersey, so this was a nice early-season victory.

Ocean City was dominant on defense, allowing just five shots, blocking multiple others and recording its third shutout this fall.

“We all work really hard,” senior defender Riley Fortna said. “We work as a team. This was a huge win. Everyone worked really hard together and we always had each other’s back. It’s so exciting.”

Ocean City coach Lisa Cuneo said she wants to play out-of-conference games, and Williamstown is one of the teams they enjoy playing.

“Dan Torcasio (Williamstown’s coach) is a good friend of mine,” Cuneo said. “We always try to battle it out, and he knows it. This isn’t a free ride. He comes down here for a good, competitive battle. And that’s what we expected as well. That’s the most pressure our backs have seen.”

Despite that pressure, the Ocean City defense was relentless.

Fortna anchored a defense that did not allow a shot in the second half until the 61st minute (or 21 minutes in). The defense was making plays all over the field Saturday, and Fortna was always right there.

Her level of play is not surprising to her coaches and teammates.

“Riley is a veteran,” Cuneo said. “She has been starting since she was a freshman. She knows. She has been to the state championship game (when the Red Raiders won the state Group III title in 2019). In Riley we trust, we say. She is smart back there. She is calm, cool and collected.”

Last season, Ocean City’s offense operated through Summer Reimet and Hope Slimmer in 2021. Reimet, now a freshman at Monmouth University, scored a state-leading 62 goals. Slimmer, a freshman at the College of Charleston, had 43 assists, one of the most in the state.

Both were named Press Co-Players of the Year.

“Hope and Summer were a big part of our team last year, but we can still do it this year,” said Chisholm, noting that there have been seven players so far this season who scored for the Red Raiders. “It’s more of a team this year. It’s more that everybody is scoring, not just one or two people.”

Ocean City looks for each player to contribute. There is definitely more emphasis on the team aspect, and anyone can score each game. The Red Raiders also have nice depth, Cuneo said.

The Red Raiders are successful right now because of teamwork, Fortna said. They still have to make adjustments and learn as the season unfolds, which is what they did Saturday.

“We have a good group that just works hard,” said Cuneo, calling her team “students of the game, even throughout the game. They are constantly adjusting.”

Ocean City earned a free kick and a corner kick in the opening 13 minutes. Williamstown earned corners in the 18th and 19th minutes. The Braves also blocked some shots.

The script changed in the second half as the Red Raiders came out strong. In the 43rd minute, Emily Benson had a corner kick, and Naomi Nnewehi hit the crossbar. Ocean City had another scoring chance in the 53rd minutes, but the ball trickled in front of the net and Williamstown somehow got it out.

Ocean City added five shots in the second half.

“It was just a great team win overall,” Chisholm said. “Riley Fortna keeps our defense together and Coryn McDonnell, our stopper, is just amazing. We have great communication.”

Added Fortna, “We are always talking to each other. Communication is key.”

Freshman QB John Franchini leads No. 10 Mainland over No. 4 Hammonton

GLOUCESTER TOWNSHIP — Grace, Bella and Gabby Albert are always together.

Must win: As a big-time basketball recruit, Atlantic City's Quanirah Montague is having the time of her life

Quanirah Montague stood on the sidelines and took a look around the Ohio Stadium on Saturday night.

A ranking of teams in the West Jersey Football League and southern Ocean County. Rankings selected by The Press’ high school sports staff base…

Each Monday during the season, The Press will select four high school football MVPs based on the previous weekend's games.

BURLINGTON CITY — The Buena Regional High School football team left the field with a win and a purpose Saturday afternoon.

Ocean City’s Katie Maxwell controls the ball Saturday in a game against Williamstown at Carey Stadium.

Ocean City's Emily Benson tosses in the ball into play during the first half Saturday against Williamstown.

Head coach Lisa Cuneo talks to her team after they defeated Williamstown on Saturday.

Kiera Schmidt controls the ball Saturday in a game against Williamstown in Ocean City. 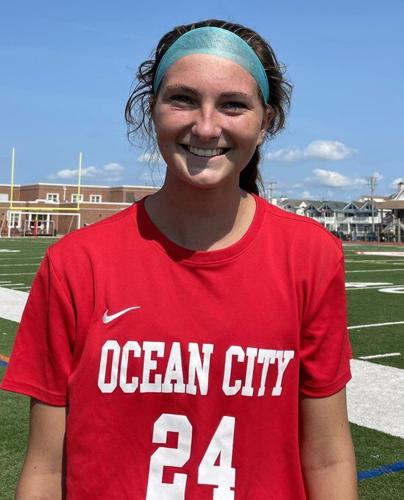 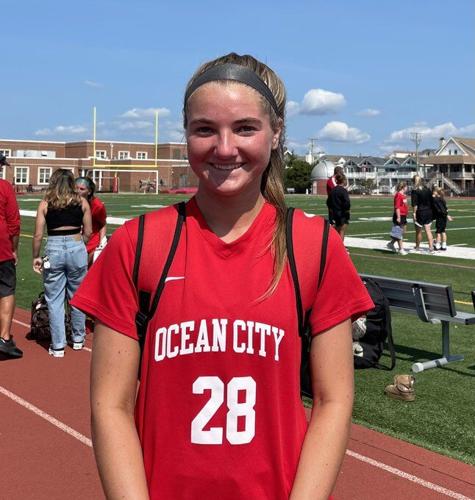