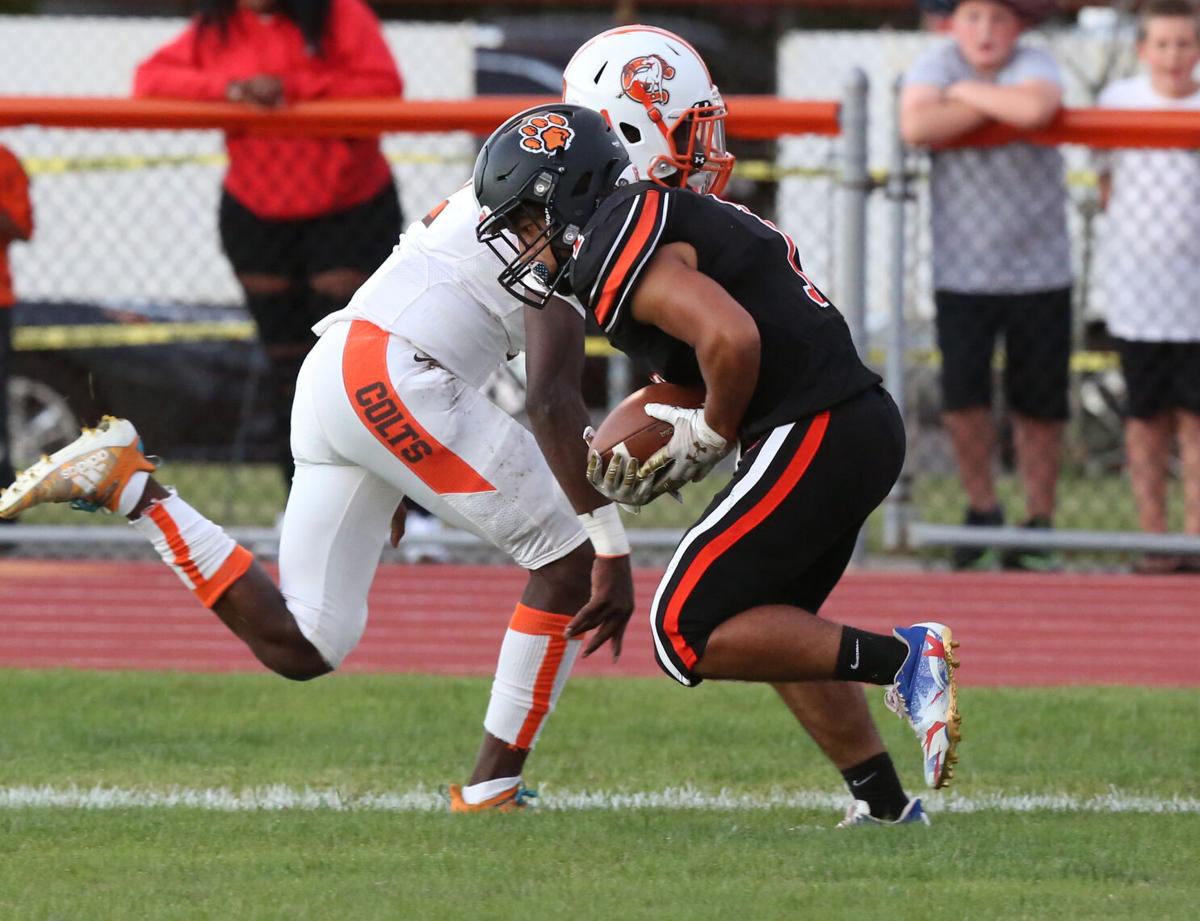 Middle Township’s Adrien Laboy scores off a pass against Cumberland Regional on Friday night in Cape May Court House. Video and a photo gallery from the game are attached to this story at PressofAC.com. 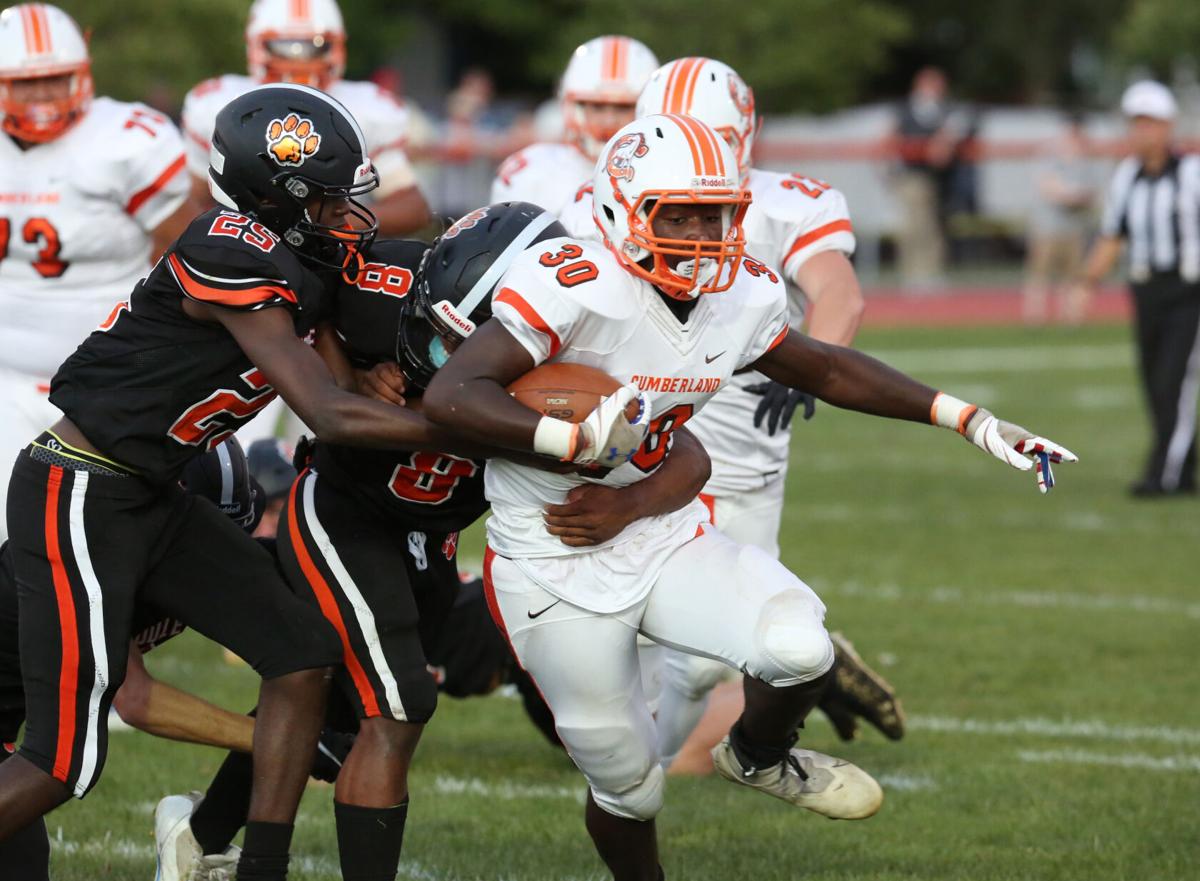 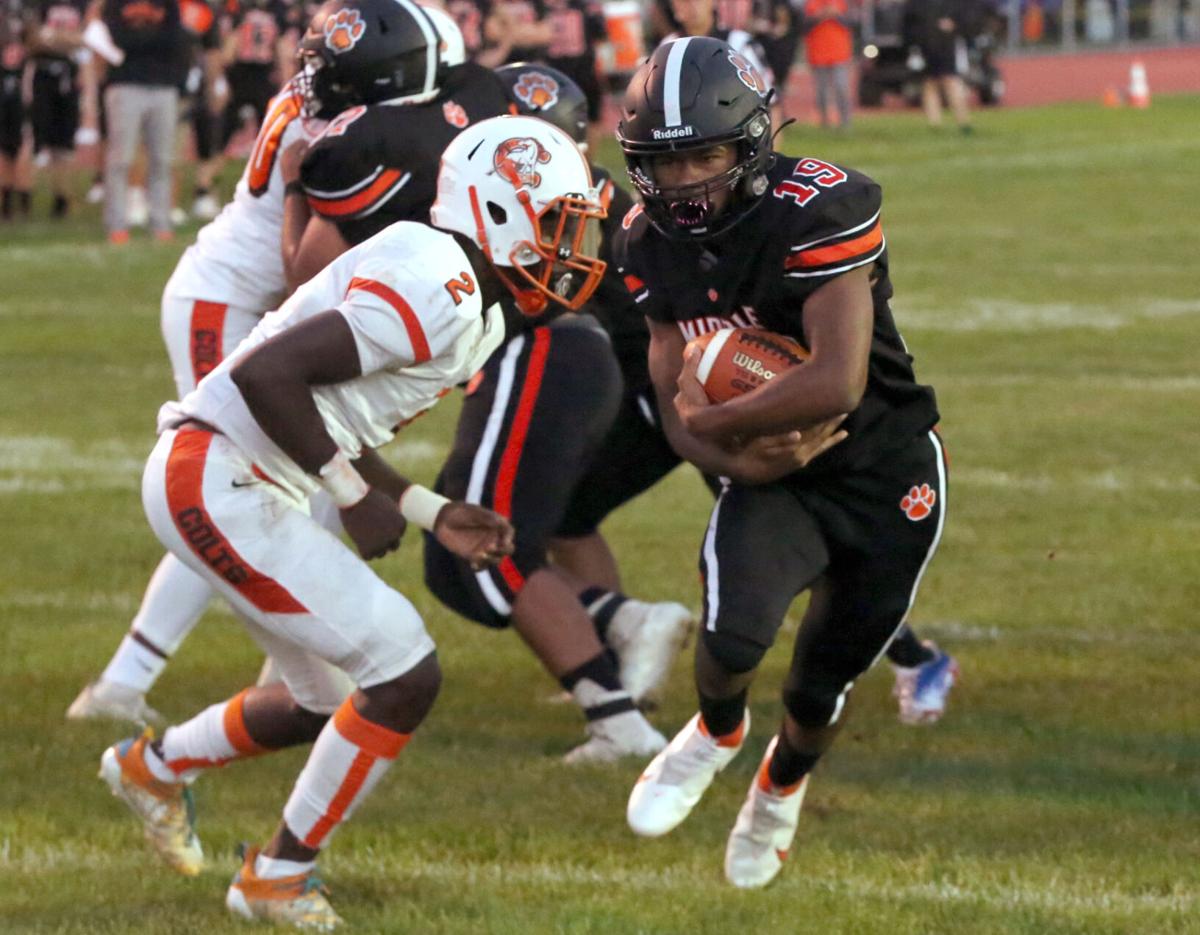 The Panthers' Remi Rodriguez bursts into the end zone for a touchdown while Kyon Barnes tries to make a play for the Colts.

CAPE MAY COURT HOUSE — After David Giulian made one of his many big tackles Friday, the home crowd started chanting his name

The senior then flexed his muscles and pumped his arms up and down for the cheering fans. And that wasn’t the only time his name was heard.

“We are happy we are 4-0, but we aren’t satisfied,” said Giulian, 18, of Stone Harbor. “We definitely have that championship in our eyes. That is our main goal.”

Giulian rushed for 26- and 12-yard scores. He also caught 21- and 20-yard touchdown passes from senior Brett Nabb, who, along with Giulian, is one of the three seniors on the team. Three of Giulian’s scores came in the third quarter, giving the Panthers a 42-7 lead.

Giulian, one of the top defensive players in South Jersey, made some impressive tackles, meeting Colts’ players attempting to rush around the corner and taking multiple them down for a loss. He had four tackles in the first quarter. Giulian began Friday with 29 tackles through three games.

“(Giulian) is one of the best, if not the best, ... players that I’ve ever had before in all my years of coaching, and that’s saying a lot,” said Middle coach Frank Riggitano said, who listed some of the defensive players he coached who went onto NCAA Division I schools. “He had a nose for the football, and his tenacity is just incredible.”

When talking about the fans cheering his name on multiple occasions Friday, Giulian smiled and laughed, saying most of them are his friends and he’s glad they came out to support him and his teammates.

“We were sleeping a little in the first half,” Giulian said. “So, I knew I had to step up on offense in the second half and let them know that we are here to win.”

Middle entered the game 3-0 for the first time since 1991. The Panthers, who are in first place in the United Division, are aiming for their first division title since 1969 and their first postseason appearance since 2016.

No one currently connected with the program can remember when Middle started 4-0, Riggitano said.

“We are very pleased,” said Riggitano, who has been at the school as a coach and teacher since 1986. “We will go in at 6 a.m. (Saturday) with the kids. We will lift, we will look at the film, do some jogging and get ready to play a Clayton team (next week), who traditionally has a nice team.”

Reasons for Middle’s early-season success could be seen right away Friday.

After winning the toss and electing to receive, the Panthers scored in just 4 minutes, 21 seconds. Nabb threw a touchdown pass to Giulian to give Middle a 7-0 lead.

With 5 minutes, 45 seconds remaining in the first quarter and facing a fourth-and-14, Nabb tossed a screen to sophomore wide receiver Michael Zarfati, who then threw it to Adrien Laboy for a TD to help extend the lead to 14-0.

After blocking a punt late in the first quarter, Middle took over at midfield and drove it down to the Colts’ 2-yard line. On the first play of the second quarter, freshman running back Remi Rodriguez ran up the middle to help make it 21-0.

Cumberland junior quarterback Kyon Barnes rushed 23 yards for a TD on the ensuing drive to cut the Colts’ deficit to 21-7. The Cumberland defense stopped Middle on its next drive. The Colts then marched to Middle’s 7 but were unable to capitalize before halftime as back-to-back penalties pushed them too far back, forcing a turnover-on-downs.

“Things are going pretty well right now,” Riggitano said. “What I’m most pleased with (Friday) is I really jumped on them at halftime. We were up 21-0, and I think we had a little bit of a letdown. I was disappointed. I told them it was the first time that I’ve been embarrassed in eight weeks, and I better see some response and reaction. And they came out and played very, very well and hard in the second half.”

Middle scored 29 points in the second half, including Rodriguez’s 35-yard touchdown run to help extend the lead to 50-13. Zarfati got an interception in the third quarter

Barnes rushed for a 1-yard score in the fourth quarter for Cumberland. Germain Harper added a 2-yard rushing touchdown to cap the scoring.

“That’s what we are here to do,” Giulian said about the Panthers’ determination to keep winning.

Middle Township’s Adrien Laboy scores off a pass against Cumberland Regional on Friday night in Cape May Court House. Video and a photo gallery from the game are attached to this story at PressofAC.com.

The Panthers' Remi Rodriguez bursts into the end zone for a touchdown while Kyon Barnes tries to make a play for the Colts. 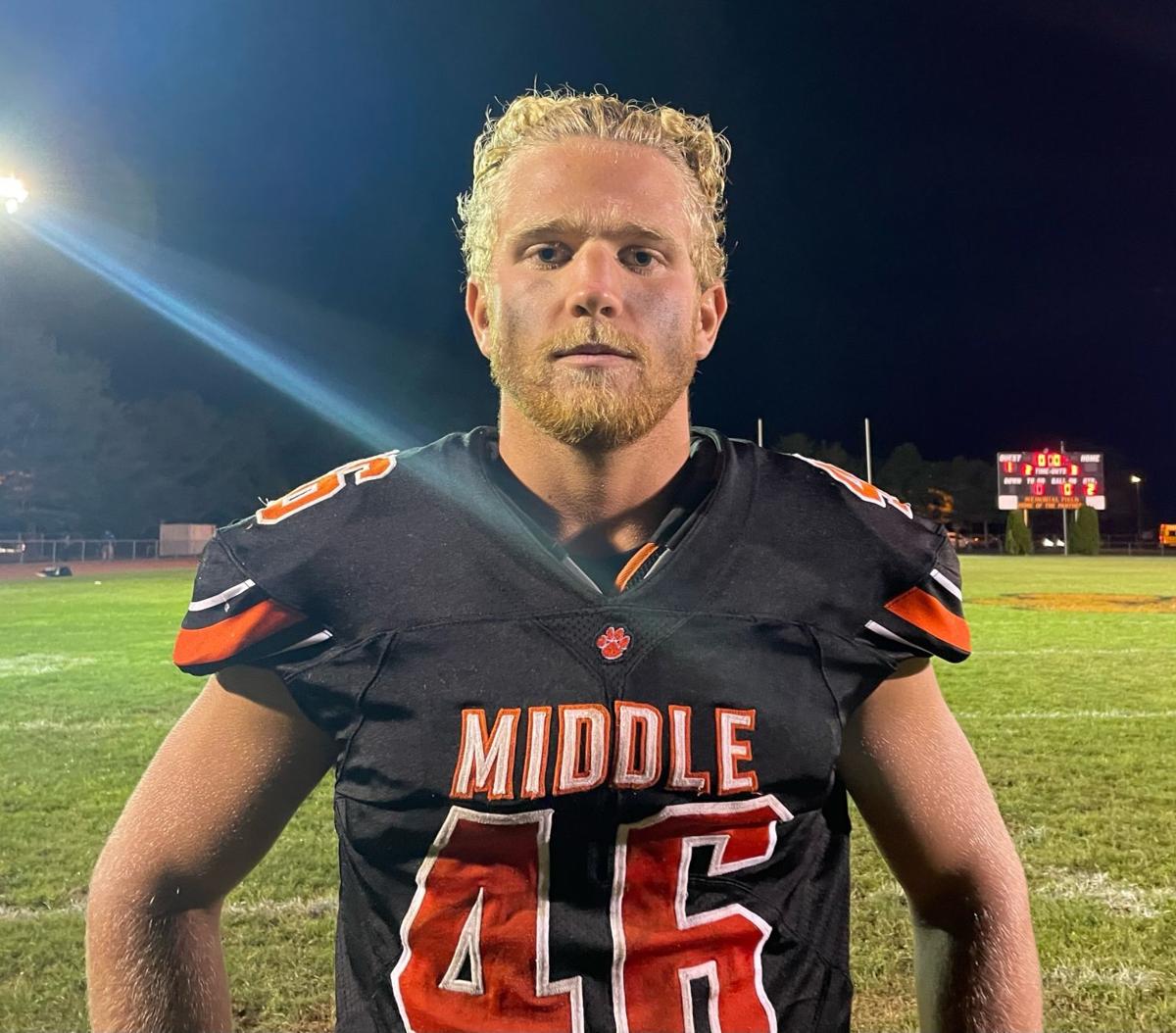