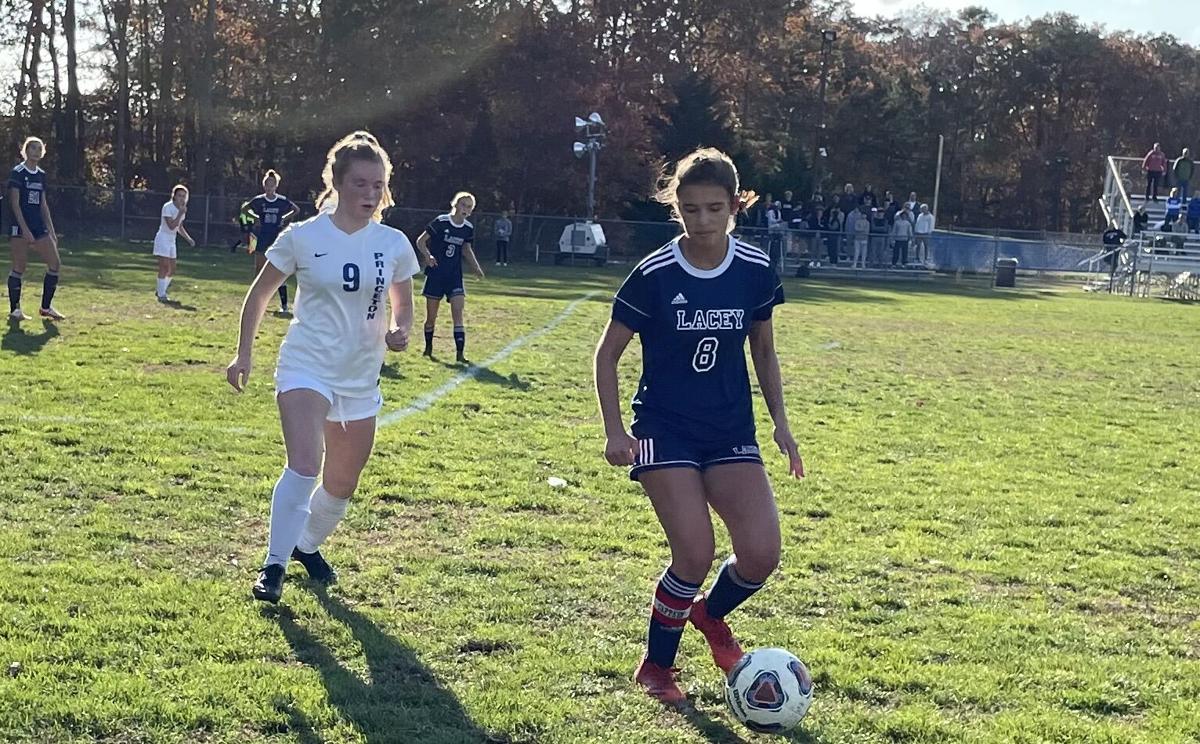 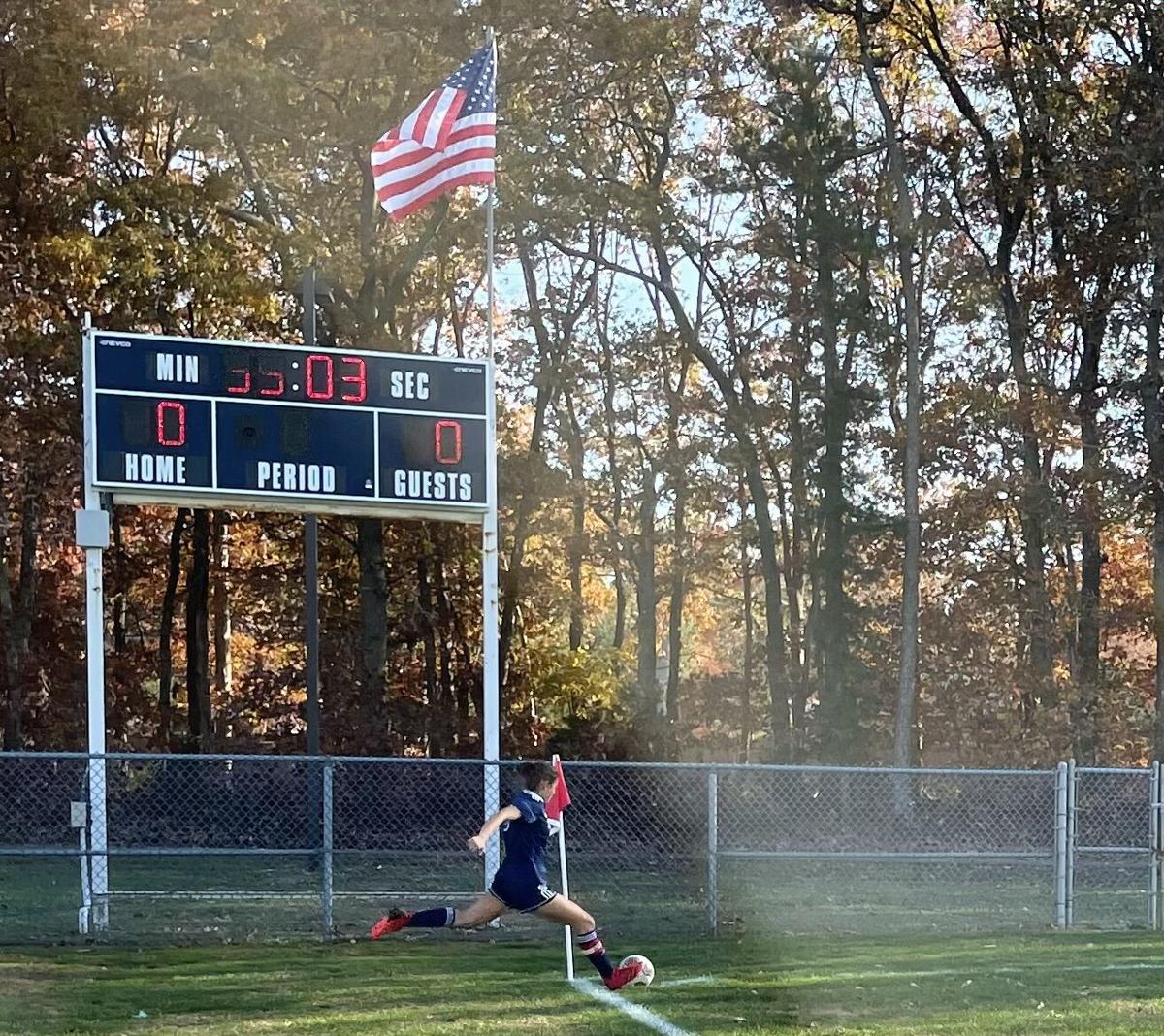 Lacey Township H.S. girls soccer player Abby Stephens sends in a corner kick in the first half of the state Group III semifinals Wednesday. The Lions lost to Princeton in the first overtime.

Lacey Township H.S. girls soccer player Rosio Cardenas, left, delivers a shot on net in the first half of the state Group III semifinals Wednesday. The Lions lost to Princeton in the first overtime. 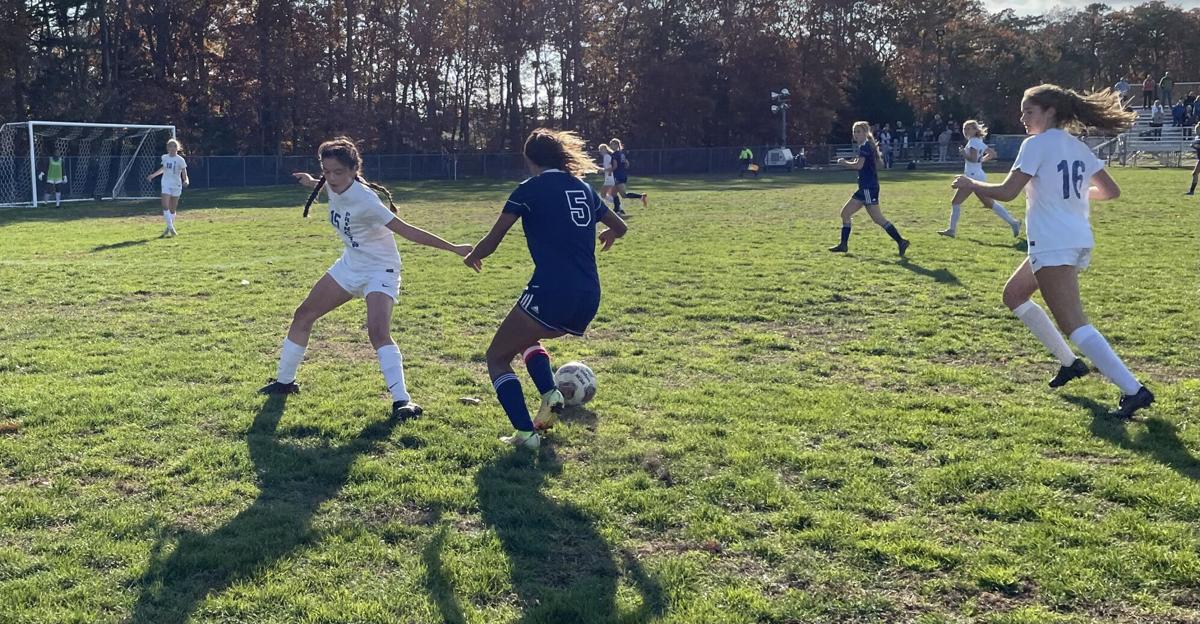 Lacey Township H.S. girls soccer player Rosio Cardenas, right, drives through two defenders in the first half of the state Group III semifinals. The Lions lost to Princeton in the first overtime.

LACEY TOWNSHIP — The Lacey Township High School girls soccer team did everything right and controlled most of the game Wednesday.

That’s what made the end result so heartbreaking.

Sophia Lis scored in the first overtime to give Princeton a 1-0 victory over the Lions in a state Group III semifinal game. The Little Tigers (21-2) will play Wayne Valley for the state championship 12:30 p.m. Sunday at Kean University.

“You know, it was a heartbreaker,” Lacey senior midfielder Abby Stephens said. “That is the best way I can describe it. We played our butts off. We played so, so hard for each other and for the team. We really wanted to make that statement that we are state champs, and we can be that team.”

On Saturday, Lacey captured its first sectional title since 1997 with a shootout win over Mainland Regional. On Wednesday, the Lions were dominant overall, not allowing Princeton to generate much offense and continually putting the pressure on the Little Tigers’ defense and goalkeeper, senior Moji Ayodele.

“It doesn’t take away from what we did this weekend,” Stephens said. “I would just describe it as unlucky. We had our chances. We worked really hard. I couldn’t have asked for any better effort from the team. Despite not getting the result, I’m so proud of the team.

“This entire season has been just relentless effort, no matter the circumstance or game. And it was the same (Wednesday). I’m so lucky to have been able to be a part of it.”

Stephens is one of the three captains on the team. The 18-year-old from Forked River is also one of the leaders on a very strong midfield. Just like they have done all season, the Lions’ midfield clogged the lanes and, for most of the game, prevented Princeton from getting the ball through to set something up on offense.

When the Little Tigers possessed the ball in the offensive zone, the Lions were quick to clear. Princeton had just two shots in the first half.

And Stephens attributes that to hard work and togetherness.

“It has been a really great group, something that has been building up over the years,” Stephens said of the midfield. “We lost a couple players last year, but luckily we had some really awesome freshmen that came in to help in the midfield.”

Some of those talented freshman midfielders include Natalie McGovern, who leads the team in goals, Reece Paget and Mackey Brotherston, who did not play Wednesday due to injury. The team, especially the midfielders, have great chemistry, Stephens said.

Lacey coach Jack Mahar noted that Wednesday was only the third time in program history the Lions reached the state semifinals.

“It’s like uncharted water for us,” said Mahar, who has been the girls coach for nine seasons and before that the boys’ coach for seven years. “We have never gone this far.”

The Lions had six shots in the first half, and seven in the second. Two huge opportunities came in the first when one shot hit the crossbar and another just missed after a diving save from Ayodele, who made 11 saves. The Lions also had chances on some corners and set pieces.

“I thought we controlled the game,” Mahar said. “A little unlucky with some of the shots, but take your hat off to (Princeton). They are a good team as well. I thought their keeper (Ayodele) kept them in the game. She made some really nice saves. We knew coming in she was very good.”

But the Little Tigers “just got the goal in the end,” Mahar said.

The Lions knew Lis and Holly Howes were two of the top players on Princeton, and planned to keep the pressure on the Little Tigers and keep the ball away from the two standouts.

Mahar called his team “the hardest working group” he had in his career.

And that season-long passion showed after Princeton scored.

The players gathered near midfield, some were still near the net. There were plenty of tears and hugs among teammates and coaches. But, eventually, the team will look back with confidence and pride about their historic season, Mahar said.

“I couldn’t be more proud,” the coach said. “It’s sad. It’s going to hurt. I feel bad for them, especially for the seniors. They all had a great year. They did.”

Lacey is a very young team with only six seniors. So, the returning talent is promising, Mahar said.

For seniors like Stephens, this season was one amazing journey. Stephens has started at the varsity level since she was a freshman.

“I don’t even know if I can describe how much I’m going to miss it,” said Stephens, holding back tears while summing up her high school career. “It has been so special, and it is definitely something I’m going to cherish forever. I would do it all over again if I had the chance.

“It’s sad it’s over, but I’m so, so lucky to have been a part of this team and have this experience.”

MILLVILLE — It was the 150th meeting between the Millville and Vineland high school football teams, so it seemed fitting that history was made…

St. Joseph caps season with a win over Winslow Township

WINSLOW TOWNSHIP — Kevin Mayfield didn’t know exactly how to explain what his St. Joseph Academy football career meant to him.

HAMMONTON — Emily Nelson had plenty of reasons to smile Wednesday.

Lacey Township H.S. girls soccer player Abby Stephens sends in a corner kick in the first half of the state Group III semifinals Wednesday. The Lions lost to Princeton in the first overtime.

Lacey Township H.S. girls soccer player Rosio Cardenas, left, delivers a shot on net in the first half of the state Group III semifinals Wednesday. The Lions lost to Princeton in the first overtime.

Lacey Township H.S. girls soccer player Rosio Cardenas, right, drives through two defenders in the first half of the state Group III semifinals. The Lions lost to Princeton in the first overtime. 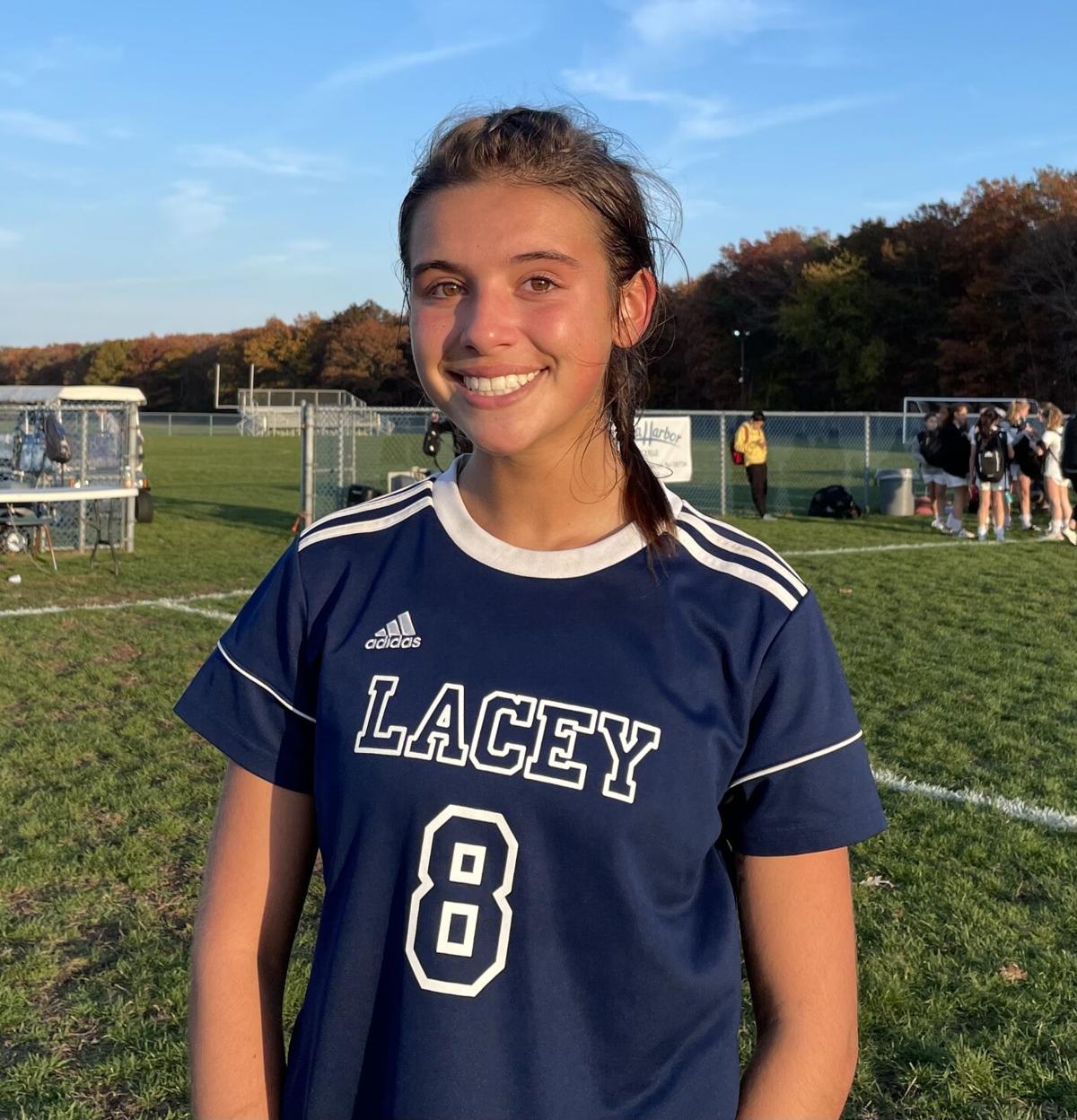