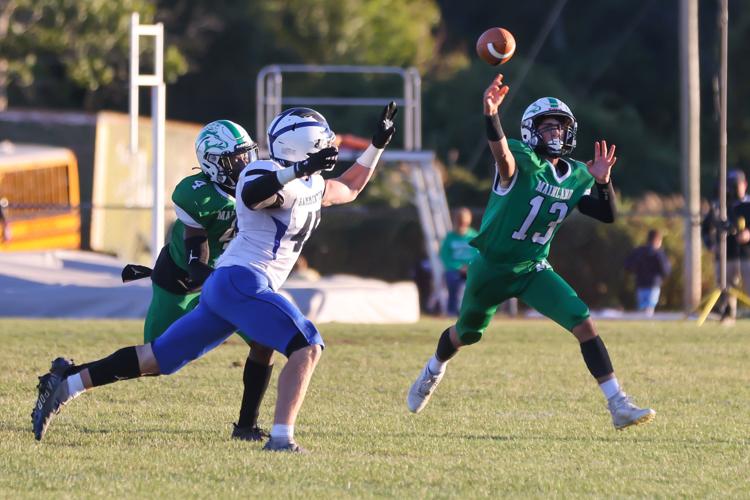 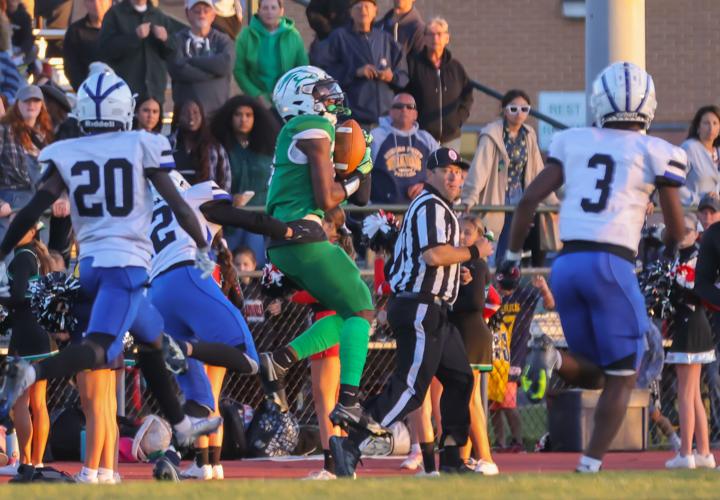 Jamie Tyson catches a long pass for the Mustangs. 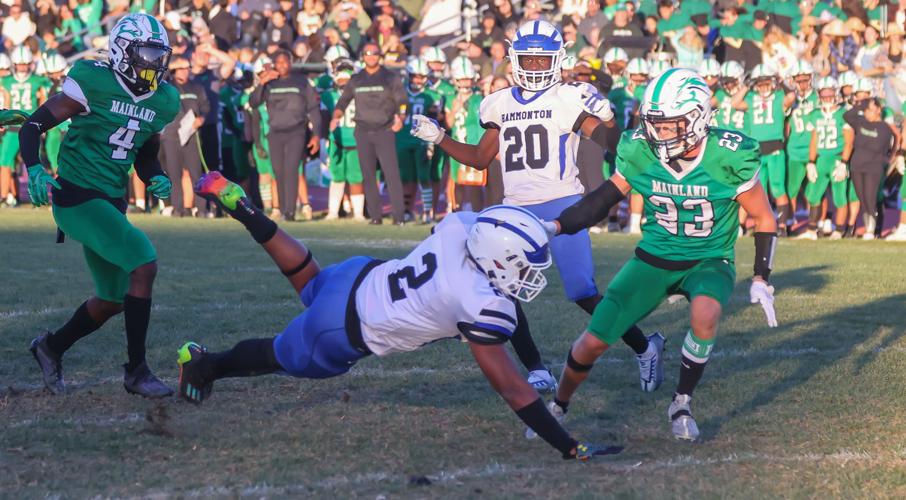 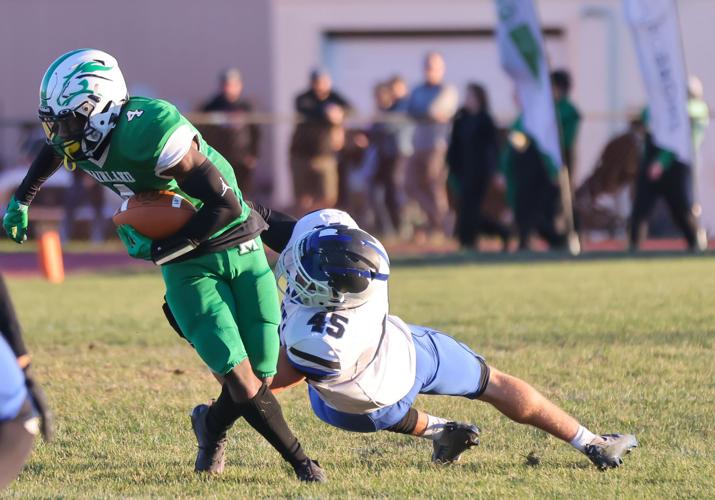 The Blue Devils’ Joey Gillen tackles the Mustangs’ Ja’Briel Mace for a loss.

Bobby, 11, and Roman Franchini, 7, couldn’t wait. Moments after the game ended, they ran onto the field to give their big brother, the Mainland Regional High School freshman quarterback, a hug.

John Franchini threw for two touchdowns and ran for another score as Mainland rallied to beat Hammonton 29-14 in a matchup of South Jersey Group IV contenders.

“Johnny is amazing,” Mainland senior running back and defensive back Ja’Briel Mace said. “I haven’t seen a freshman quarterback like that in awhile. What we needed all season was a quarterback to lead us, and Johnny fulfilled that role. I’m super proud of him.”

The 15-year-old Franchini completed 7 of 13 passes for 155 yards. He has started since the season opener, but this was easily the most Mainland has relied on him.

“I was a little nervous before the game,” he said with his younger brothers smiling at his side. “It’s a big game, but as soon as I got that (first) snap. I was relaxed. This is huge for us for playoff seeding and our confidence.”

What did the win do for Franchini’s confidence?

“This win was a big step up in the right direction,” Mainland coach Chuck Smith. “This is a game where we had to see where we are right now. Had we taken that step forward?”

Fans filled the home and visiting bleachers at Mainland on a chilly night to watch this much anticipated matchup. Mainland is (4-1) is ranked 10 in The Press Elite 11. Hammonton (4-1) is ranked No. 4.

Both teams had run the ball almost exclusively this season. But the difference in Friday’s game was Franchini’s passing, which is remarkable considering he has been a high school student for less than a month.

His TD passes came in the second quarter. He found Tyson open down the left sideline for a 77-yard TD.

‘I had to be ready,” Tyson said. “I knew the (Hammonton) line was outstanding, and we would have to find other ways to score.”

Later in the quarter, Tyson made a leaping catch over the middle for a 17-yard TD.

“He made a great catch on that one,” Franchini said. “That’s all him.”

Still, the Mustangs trailed 14-13 late in the third quarter. At that point, the game reminded Smith of Mainland’s 21-20 loss to Ocean City on Sept. 1.

“The kids really hunkered down (Friday) and played tough,” Smith said. “They made big plays when we needed to make the big plays.”

Watson made the first big play of the Mustangs comeback when he recovered a Hammonton fumble at the Blue Devils 35-yard line with 1 minute, 18 seconds left in the third quarter.

Eight plays later, Franchini ran around the left end and into the end zone for his first high school TD to give the Mustangs a 19-14 lead with 8:46 left.

More big plays were on the way to help Mainland preserve the lead. Hammonton’s next two possessions both ended with interceptions.

Sheeran made the first pick for the Mustangs. It set up a 25-yard field goal from freshman kicker Nate Kashey to put Mainland up 22-14 with three minutes left.

Mace then made his third and final interception, returning it 80 yards for a score.

Mace, who is one of South Jersey’s top running backs, rushed for just 36 yards. But his play on offense never affected his defense.

“I look at it like, ‘Hey, they may be shutting me down on offense,’ ” Mace said, “ ‘but trust me, they’re not going to shut me down on defense.”

The music blared in the Mainland locker room afterward. Franchini couldn’t stop smiling. What is just as remarkable as his performance was how his older teammates have accepted him. It would have been easy for the Mainland upperclassmen to brush him aside.

“He’s one of my favorite freshmen in the school,” Tyson, a junior, said with a laugh. “I see him in the hall. I talk to him to make sure he’s ready for the game. He’s the nicest person I know. I’m glad he stepped up and did his thing.”

Jamie Tyson catches a long pass for the Mustangs.

The Blue Devils’ Joey Gillen tackles the Mustangs’ Ja’Briel Mace for a loss. 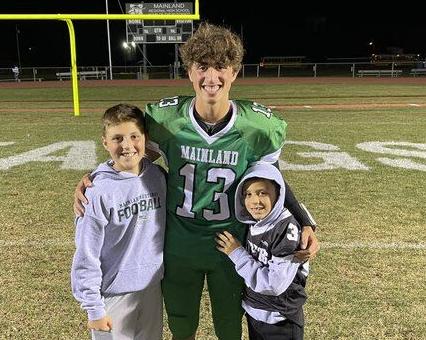 Mainland’s John Franchini with his brothers, Bobby, left, and Roman after the game.