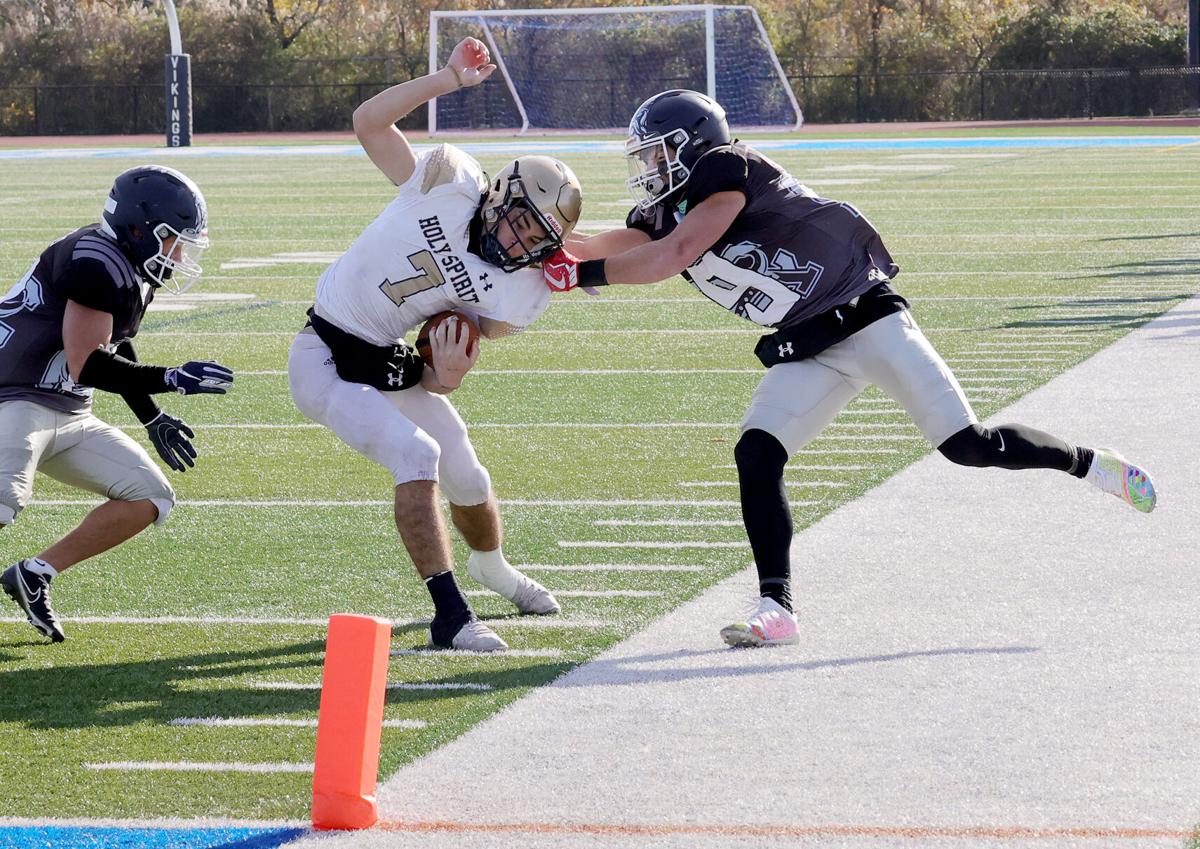 Holy Spirit’s Trevor Cohen is tackled by Atlantic City’s Dylan Culmone just before the goal line during the first half of Thursday’s annual Thanksgiving rivalry game in Atlantic City. 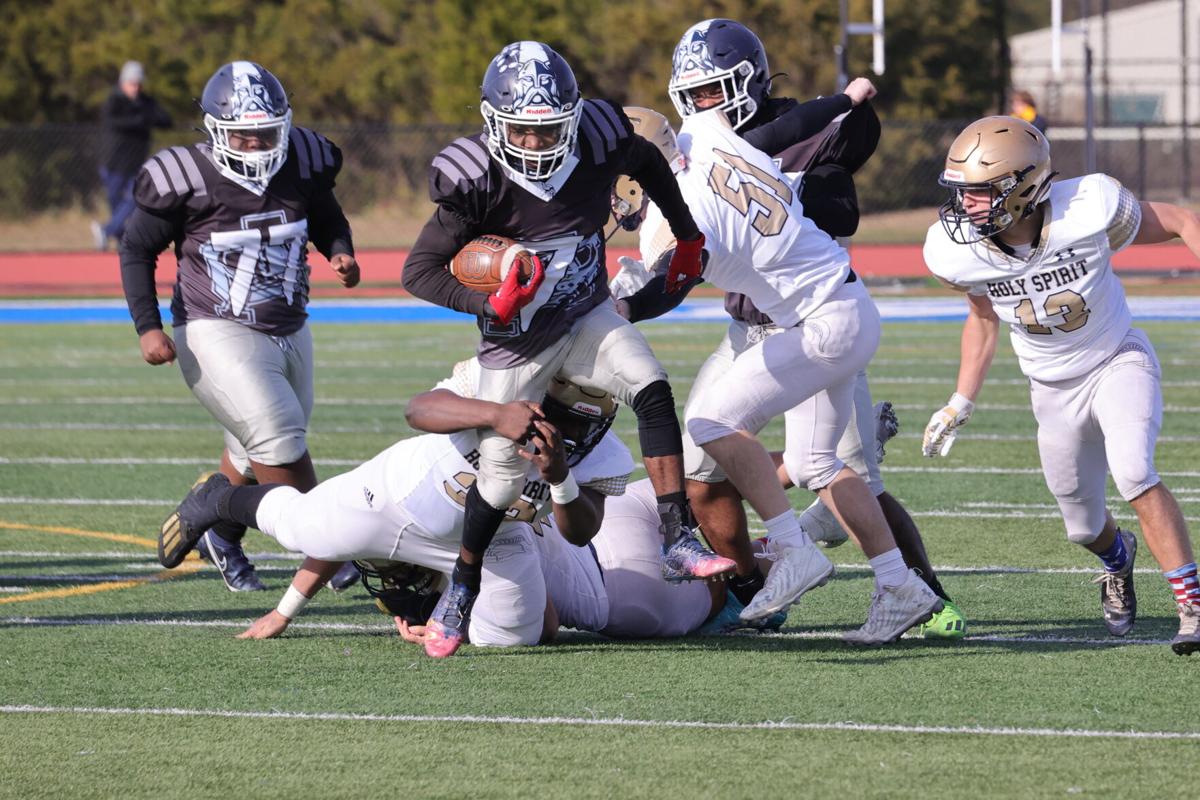 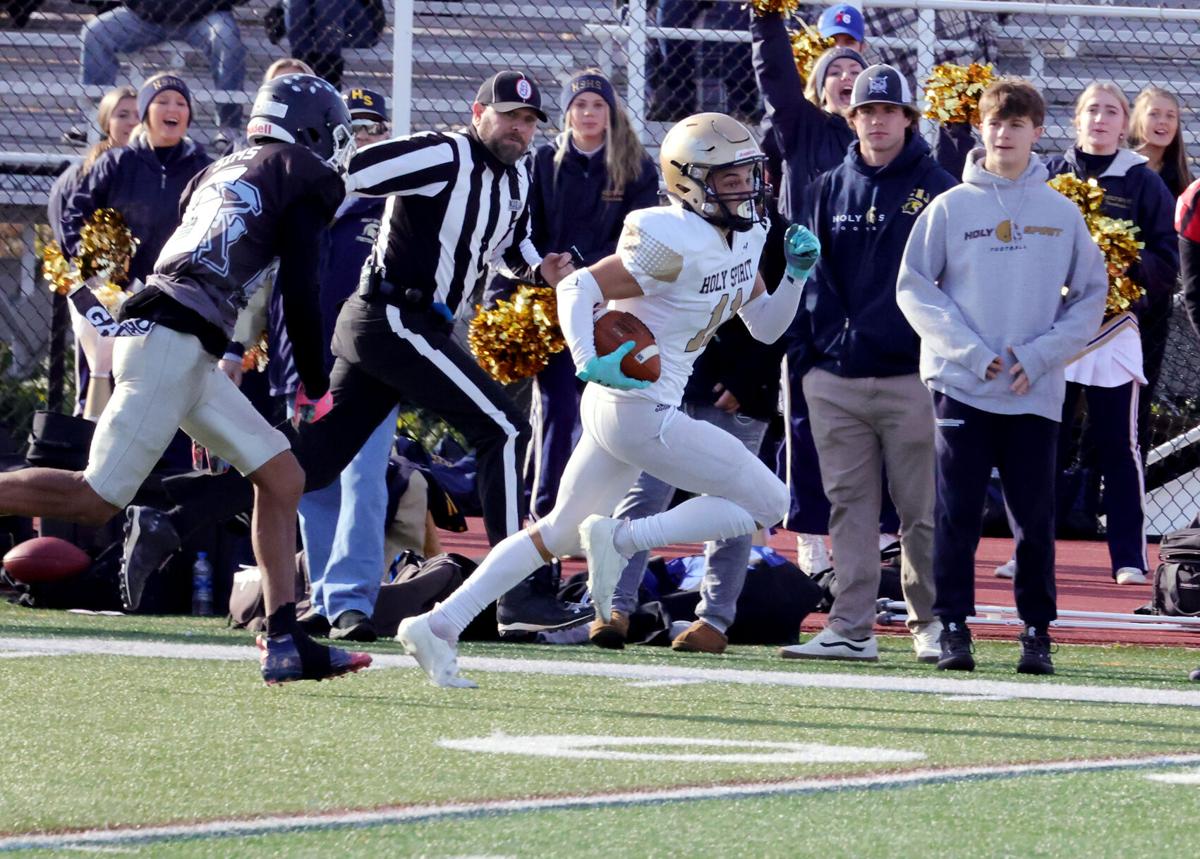 Holy Spirit's Elijah Steward runs for a touchdown as Atlantic City's Tyliqk Sims pursues during the first half.

In between, 6-foot-3, 285-pound senior offensive lineman Jesse Bartlett barreled his way into the end zone for the first TD of his high school career.

It was all part of a memorable day for the Spartans football team en route to a 49-8 win over Atlantic City in the 93rd edition of Atlantic County’s oldest Thanksgiving rivalry.

“It all goes into just having fun,” Steward, a senior, said. “It was my last time out here with this group of guys. There’s nothing like high school football. I didn’t want to forget this.”

Spirit will have plenty to recall when it looks back on Thursday in the future. Cohen completed 15 of 19 passes for 264 yards and five TDs. The senior also ran for 82 yards on just three carries.

Steward caught 10 passes for 193 yards and three TDs. He finished with a school-record 1,081 receiving yards this season.

There were plenty of other highlights. Senior linebacker Michael Francisco took a turn at tight end and caught a TD pass. Sophomore defensive back Michael Innocente recovered a fumble in the end zone for a score.

But Spirit’s most unconventional touchdown came in the second quarter. Bartlett, who had run for a two-point conversion in the first quarter, line up in the backfield on a first-and-goal from the 3-yard line and ran straight ahead for the score.

“Full steam ahead,” Bartlett said with a laugh. “Drop the shoulder and keep going.”

Thursday’s game was played under sunny skies and temperatures in the 50s. These schools first met in 1926. Atlantic City leads the series 52-37-4, but Spirit has won four straight.

Both teams gathered at midfield after the contest for the presentation of the Boyd-Marczyk Trophy to the winning Spartans. The trophy is named after deceased coaches John Boyd of Atlantic City and Stan Marczyk of Atlantic City.

Throughout the fourth quarter, Spirit was able to pull its seniors off the field one-by-one to allow them to get recognized by the crowd.

“Holy Spirit is tradition,” Cohen said. “We’re a family. We’re going to congratulate our seniors for a great four years. I’m really happy we got to do that.”

Spirit began the season ranked No. 1 in The Press Elite 11 but finished 5-6. Injuries helped lead to a four-game losing streak in the middle of the season.

Most New Jersey high school football teams have done away with their Thanksgiving game. The contest just doesn’t fit into an overfilled schedule that emphasizes the playoffs. But, this holiday rivalry still means a great deal to the Vikings and Spartans.

“What’s great about it is you have all the alumni that’s back here on both sides,” Spirit coach A.J. Russo said. “That’s what’s special about the Thanksgiving tradition. I know some people think the romanticism (of the game) is gone, but for us it has not. It’s a good feeling to walk off the field on Thanksgiving and know you just got a victory.”

A photo gallery and video highlights are attached to this story at PressofAC.com.

Holy Spirit’s Trevor Cohen is tackled by Atlantic City’s Dylan Culmone just before the goal line during the first half of Thursday’s annual Thanksgiving rivalry game in Atlantic City.

Holy Spirit's Elijah Steward runs for a touchdown as Atlantic City's Tyliqk Sims pursues during the first half.