ABSECON — Early in the fourth quarter, DJ Germann caught a fast-break pass underneath the basket.

The Egg Harbor Township High School junior guard could have easily laid the ball in for two points.

Instead, he flipped it back to Carlos Lopez, who made the uncontested shot.

The sequence typified the unselfish way Germann played all game.

The point guard scored 17 points and had five assists as EHT beat Linden 59-47 in a Seagull Classic game at Holy Spirit.

“He’s always putting his teammates before him,” Lopez said of Germann. “He’s a great player to play with.”

“For my money, we have the best core of guards around,” EHT coach Cameron Bell said. “Everybody knows Carlos, but DJ is a big reason. He’s still just scratching the surface. He makes us so dynamic because he’s a true two-way player.”

The Eagles used only five players for the entire game. EHT does not play again until it travels to play St. Joseph Academy in Hammonton on Friday.

“It’s just the way it worked out,” Bell said. “We do have a bench, but the pace of the game and the flow, as coaches you go with who you trust, and we know we have four days off.”

EHT played with poise against Linden. Lopez and Germann did not force the action.

“We’re not scared of a packed gym,” Germann said. “We’re getting used to it. We show it out there on the court.”

The Eagles took control with a 13-0 run that turned a two-point deficit with 2 minutes, 45 seconds left in the third quarter into a 47-36 advantage with 5:16 left in the game. Germann and Lopez both sank 3-pointers during that stretch.

EHT, as it did all game, did a good job during that run of getting in the passing lanes and deflecting and stealing passes. Senior forward Anthony Colon (15 points, eight rebounds) was much more active in the second half.

“As long as we play a defense and get a few stops, the offense is going to come,” Lopez said. “We got easy opportunities. We all trusted each other. We trusted the coaching staff, and it all came together.”

With the win, EHT continued to live up to its preseason hype. Many in the South Jersey basketball community knew the Eagles had talent but wondered how they would fare against traditional powers.

So far, EHT has left nothing but a trail of converts in its wake.

EHT boys move up to No. 2 in Elite 11 basketball rankings; Mainland girls also No. 2 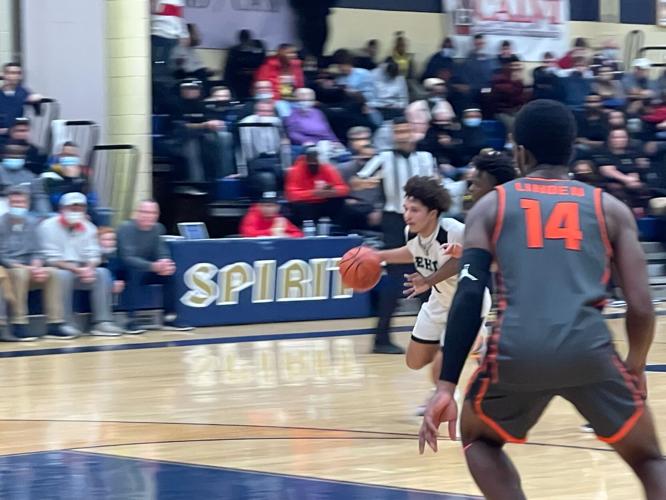 DJ Germann drives to the basket against Linden