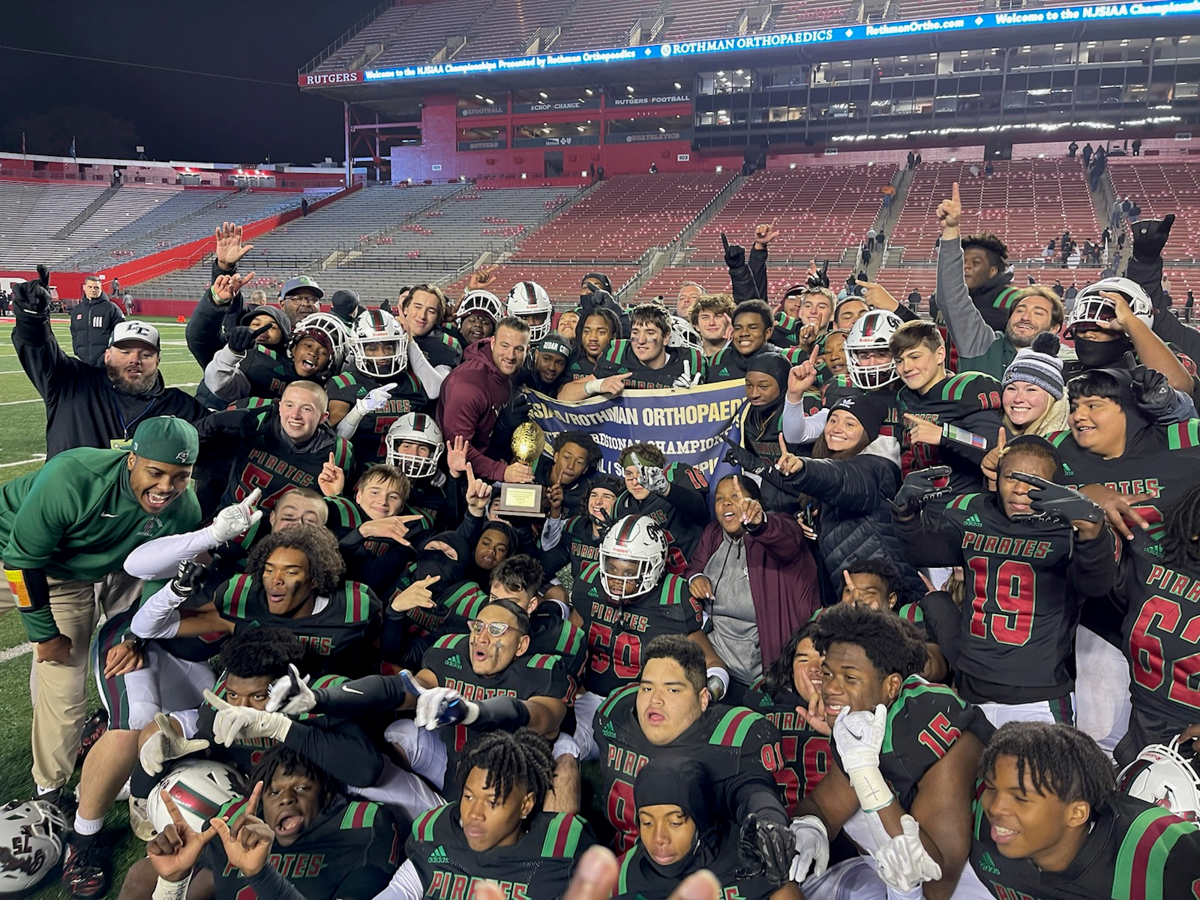 The Cedar Creek High School football team completed the first undefeated season in program history with a 35-34 win over Woodrow Wilson on Dec. 4. 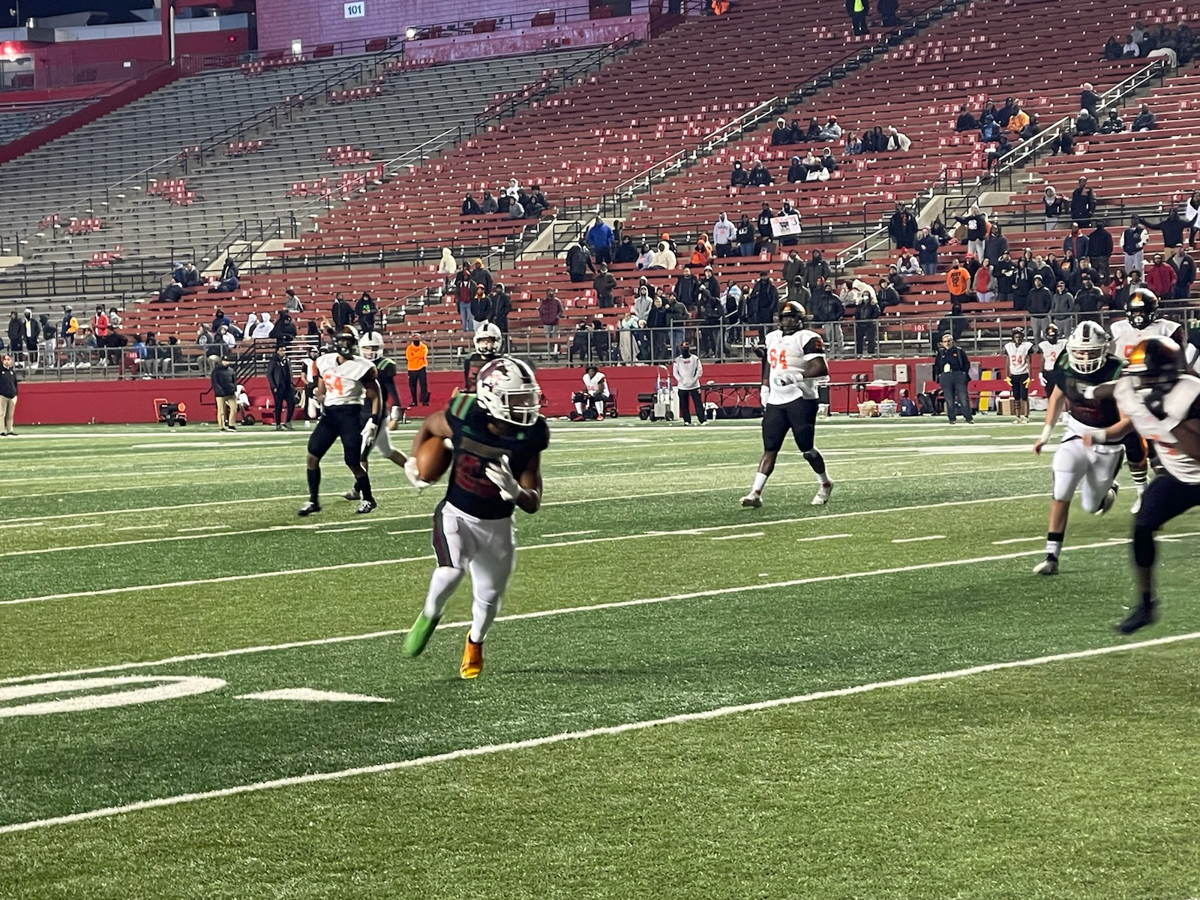 Howard catches a pass and heads toward the end one

Most of all, they survived an excruciating video review with 10 seconds left in the game.

“To come back from the deficit we did, this is the way the senior class should go out,” senior quarterback JC Landicini said. “We didn’t give up. We fought the whole way. It’s just a blessing.”

With that said, the words “After video review, the ruling on the field was confirmed” will never again sound as sweet as they did to Cedar Creek on Saturday night.

The game came down to one play and one video review.

Wilson trailed by one point and had the ball on fourth-and-goal at the Cedar Creek 7-yard line. Running back Naz’si Oglesby slipped out of the backfield and caught a swing pass from quarterback Devin Kargman. Oglesby headed for the goal line. Pirates linebacker C.J. Resto tackled him 6 inches short of the goal line with 10 seconds left.

“I thought it was a run,” Resto said. “I bit on the run. In the last second, I saw the running back flare out. I just ran to the running back as fast as I could and tried to get the tackle for the team.”

But officials quickly announced the play was under review. Video review was used this year in the championship games played at Rutgers and at MetLife Stadium in East Rutherford.

“I don’t know, man,” Resto said. “All I did after the play was just to pray to God. I thought he was down, but I didn’t know if the officials were going to call it the other way.”

It was that close.

“The words being said (on the sideline during the review) probably can’t be repeated by me,” Cedar Creek coach James Melody said with a laugh.

Finally, the officials ruled Oglesby had been stopped short of the goal line.

“It was a heavyweight fight,” Melody said, “and it went down to the finish on the inch line.”

The game was filled with riveting performances.

Creek took their only lead of the game when Landicini found Zac Ricci open over the middle for a 51-yard TD with 3 minutes, 21 seconds left in the game.

Landicini threw for 288 yards and five TDs. Wide receiver JoJo Bermudez caught 13 passes for 136 yards and a TD. Ricci caught six passes for 91 yards and two TDs. Kicker Matthew Best was the unsung standout, making all five of his extra points. Resto and Dejuan Palmer each made 9.5 tackles for Creek.

Oglesby ran for 180 yards for Wilson. Defensive back Will Love made 9.5 tackles, picked off a pass and caught a TD pass.

“It’s the best game I ever played in in my life,” Resto said. “I give all the credit to Woodrow Wilson.”

The contest was one of this weekend’s most anticipated regional title games. The teams played Sept. 25 with Creek winning 21-8. Since that game, neither team had lost, with Creek winning the South Jersey title and the Tigers capturing Central Jersey. The Pirates are ranked No. 1 in The Press’ Elite 11, and Wilson (10-3) is No. 5.

Saturday’s game, played in calm and chilly conditions under the SHI Stadium lights, tested the emotions and resolve of everyone involved.

Almost lost in the fourth-quarter hysteria was Cedar Creek’s comeback.

The Pirates ran five plays on their first three possessions of the game.

They committed turnovers on three of them.

Wilson took advantage of the two fumbles and interception to drive 18, 18 and 37 yards for TDs. The Tigers led 22-0 with 7:26 left in the first quarter.

“I was thinking this is about to be the greatest comeback in history,” Landicini said.

Not everybody else connected with the Pirates was that confident.

With a 22-0 lead, Wilson inexplicably threw the Pirates a life line with an onside kickoff that Creek recovered at its own 49-yard line.

The Pirates took advantage of the short field and drove 51 yards in 11 plays for its first score. The 8-yard TD pass from Landicini to Ja’Quan Howard with 2:23 left in the first quarter began the comeback.

The game’s intensity and excitement escalated in the second half with big play after big play.

Mike Estremera returned a kickoff 80 yards for a TD to give Wilson a 34-21 lead with 3:50 left in the third quarter.

On its first play from scrimmage after that return, Landicini found Bermudez open over the middle for a 70-yard score to cut the lead to 34-28 with 3:32 left.

That set the stage for the fourth quarter.

Wilson was on the verge of a comeback of its own after the Ricci TD catch put the Pirates up by one point.

Oglesby rumbled down the sideline for 43 yards to give Wilson the ball at the Creek 20 with less than two minutes to play.

Creek celebrated wildly, posed for pictures with the regional championship trophies and chanted “We’re No. 1!” after the win.

“This is something a kid like me dreams about their whole life,” Resto said. “Living in Egg Harbor City, this is the best feeling in my entire life. I couldn’t ask for anything more or anything less.”

Cedar Creek football photo for B5 for Tuesday, Sept. 7

24 years later, Jamaica's four-man bobsleigh team is back at the Winter Olympics

24 years later, Jamaica's four-man bobsleigh team is back at the Winter Olympics

Ben Harris, Devon Bock provide Middle with boost off the bench in 55-52 win over Wildwood Catholic

CAPE MAY COURT HOUSE — With nine points and nine rebounds, Devon Bock could have been the surprise of the high school boys basketball game bet…

Bella, Ava Mazur each score 11 to lead No. 2 Mainland over rival Ocean City

LINWOOD — As they have done all season, the Mazur twins gave the Mainland Regional High School girls basketball team the creativity it needed …

Growing up, AJ Ryker watched older brothers Jonathan and Sean get to play football together at Hammonton High School.