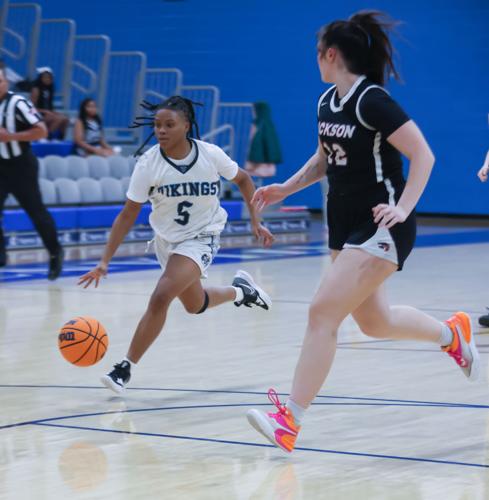 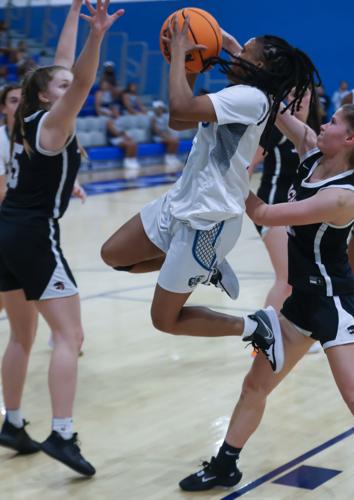 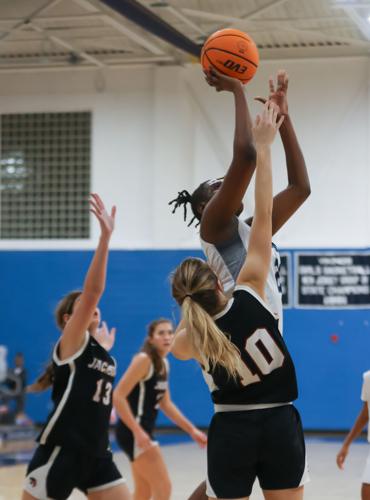 Quanirah Montague scored a team-leading 25 points to lead the Vikings to a 60-49 win over Jackson Memorial in a nonconference game. It was the Vikings’ (10-4) ninth straight victory after starting 1-4.

The Vikings outscored Jackson Memorial 20-8 in the third quarter to take a 47-38 lead after trailing 30-27 at halftime. Montague scored 10 in the third. She’s committed to Mississippi State University on an NCAA Division I basketball scholarship.

“It feels good,” Montague said. “We just have to keep the win streak going. We were losing in the beginning, but we are going to come back. We are going to make a run for it.”

The Vikings were down early but put together a run and took an 11-10 lead. Montague, a 6-foot-6 senior, made some impressive blocks and grabbed multiple defensive rebounds to keep the score close.

Jackson Memorial (11-7) closed out the first quarter on a 6-1 run and led 16-12. Jackson continued to build its lead to 21-14 in the second. Atlantic City’s Taison Parker made a basket and two free throws to cut the deficit to 21-18.Jackson’s Chloe Messer hit three 3s in the quarter, including one shot to extend the lead to 24-18 and another to make it 30-24.

“I think the girls are glowing up,” Atlantic City coach Jason Lantz said. “We have an older group, but the reality is COVID really set our program back a couple notches.”

The Vikings have a bunch of seniors. Two years ago, the winter seasons were shortened after sports started back up because of the pandemic. Most of Atlantic City’s current starters were sophomores and did not get much time to develop. The team used last season to grow.

At the start of this season, it took the team some time to mesh together as not everyone practiced together before the campaign due to conflicting schedules.

“It took time to start to sprout,” Lantz said.

Parker scored eight in the second, and Montague had eight as the Vikings trailed 30-27 at halftime. Parker went 4 for 4 from the free-throw line in the quarter, including two big throws to cut the deficit to 24-22.

“We didn’t really talk too much (at halftime),” Montague said. “It was just our defense.”

The senior knew her team was scoring, they just had to make stops and create turnovers.

“They have some good shooters,” Montague said of Jackson Memorial. “All we did was step up on defense. That’s all we had to do. Defense wins the game.”

Parker scored in the third to make the score 33-31, and Bridget Roach’s free throw made the score 33-32. The Vikings took a 34-33 lead after Parker’s jumper.

Montague’s basket extended the lead to 36-33, and later had a put-back to give her team a 38-36 lead. Atlantic City led 47-38 after three quarters after Sasha Lemons’ 3 with 25 seconds remaining and Montague’s basket at the buzzer.

“We just have to keep going and keep winning and see how far we can get,” Montague said. “I hope we can go far.”

Lantz said Parker, Cecelia Marota, Aubri Luckey and Parker “stepped up defensively and made a big impact on the game in the second half.”

“Every win is a big win,” he said. “Every game is like a championship for us.

This week's Elite 11 rankings for swimming, wrestling and basketball

A ranking of schools in Atlantic, Burlington, Camden, Cape May, Cumberland, Gloucester, Ocean and Salem counties. Ranking selected by The Pres…

Scott McCracken has a high school boys basketball coaching job straight out of a movie.