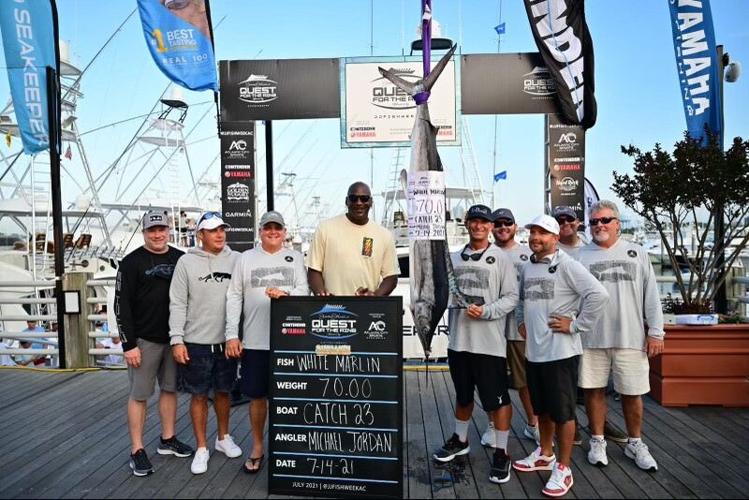 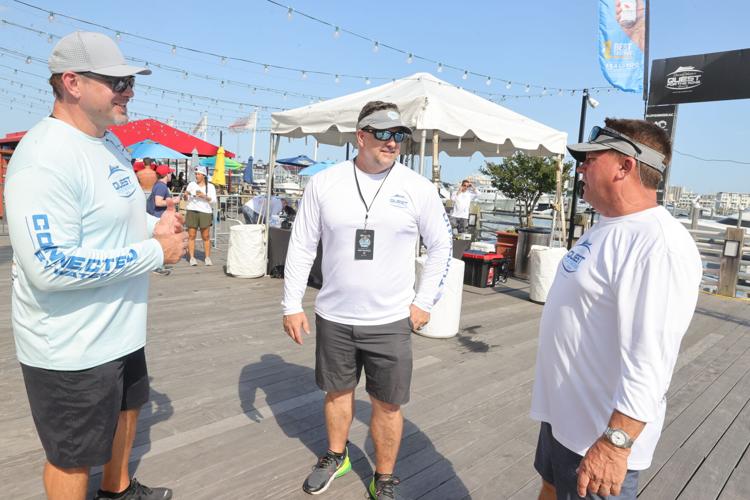 From left, Greg Mark, Bruce Eberst and Tod Roy are competing in Jimmy Johnson’s Quest for the Ring fishing tournament in Atlantic City.

ATLANTIC CITY — Eighty boats and 600-plus anglers went about 120 miles out to sea Wednesday off the coast of the resort.

Jordan and his team were one of the first boats to weigh-in Wednesday as part of the inaugural Jimmy Johnson’s Quest for the Ring fishing tournament, based at Frank S. Farley State Marina at Golden Nugget Atlantic City.

The basketball standout caught a 70-pound white marlin on an $8 million, 80-foot Viking boat. Jordan has been in the area this week and was seen leaving Steve & Cookie’s By The Bay in Margate on Tuesday night.

With sunny skies and warm temperatures, it was a perfect summer atmosphere for the second day of the event, which ends Friday with an award ceremony Saturday.

The first boat to come back to the dock Wednesady was Eric Remig’s Riptide. Chris Conrad, one of the anglers, reeled in a 290-pound big eye tuna. The Point Pleasant, Ocean County, resident said it was the heaviest big eye he had ever caught.

“It was the fish of a lifetime,” Conrad said. “It wasn’t a bad day at all. It was a nice, enjoyable day. ... (The tournament) is very enjoyable. Great time coming here.”

Johnson hosts this tournament annually each March in Hollywood, Florida.

But after teaming up with the Atlantic City Sports Commission, the legendary former Dallas Cowboys, Miami Dolphins and University of Miami coach and recent inductee into the Pro Football Hall of Fame brought the prestigious tournament to the resort.

Along with Johnson, Greg Mark, Bruce Eberst and Tod Roy are partners who helped start the event. Mark and Eberst played football under Johnson at Miami.

Roy had owned a restaurant near campus at the time, which is how he was introduced to the trio. The four are still close friends.

“We started the event in South Florida 10 years ago, and built a really good brand,” Roy said. “It’s a great event, and it’s a lot of fun. Here in the Northeast, it’s some of the best fishing in the world. The two largest tournaments in the world are right here.

“We were coming in here not to compete with them, but to fish with them. It’s all part of it. The Northeast, the fishers that are up here, they want more events. They want world-class events here in their backyard. We wanted to fish out of the same pond.

Categories were white marlin, blue marlin, sailfish, spearfish, tuna, wahoo and dolphins. Lines go in at 7:30 a.m, and come out at 3:30 p.m.

The prize purse is worth $1 million.

“We bring a different aspect to the world of fishing,” said Roy, who along with Johnson, Mark and Eberst, is from the Florida Keys. “Obviously, the integrity and fishing is big up here, but we bring an entertainment aspect to the tournament that the other events don’t have up here.”

The event has a dockside party each night from 4 to 9 p.m. where participants and guests can eat and drink as the boats come in. The celebration will be extended to 11 p.m. Friday.

The tournament will have an all-day award ceremony and party at Hard Rock Hotel & Casino Atlantic City on Saturday.

“We are going to put a whole new spin on how fishing tournaments are done,” Roy added.

The event also does a lot for conservation, which is what makes it so special, Peeples said. They release about 50% or more of the fish, and have minimum sizes.

Blue marlin have to be at least 105 inches, white marlin 68 inches, tuna at least 50 pounds and dolphin and wahoo at least 15 pounds. Anything under that has to be released. Biggest releases also get prize money.

“We are excited to be here and enjoy the beautiful city you have here. We look forward to being here for years and years to come.”

What Messi says he regrets during the World Cup

What Messi says he regrets during the World Cup

From left, Greg Mark, Bruce Eberst and Tod Roy are competing in Jimmy Johnson’s Quest for the Ring fishing tournament in Atlantic City.