The ocean cleaned up to a clear blue, and the water temperatures dropped below 70 degrees, and from reports around the area, it is “fishable,” at least in the surf and the back bays.

Had a couple of interesting reports about kingfish and blowfish, but probably the most consistent action throuhgout the area is created by small to medium bluefish.

There don’t seem to be a lot of kingfish around, but some are quality.

Deer population is down, but rutting season still dangerous to drivers

Don’t take it personally if a deer runs in front of your car in the next several weeks. He’s…

Firth Bowden, of Bridgeton and Brigantine, is a fixture on the Brigantine beach. He caught two 14-inch kingfish Thursday. One of them weighed 15.6-ounces. It was entered into The Press Fishing Contest and the Atlantic County/Atlantic City Surf Fishing Derby at Riptide Bait and Tackle in Brigantine.

He caught one other kingfish for a total of three in two days of fishing. He said one of them was a beautiful silver king.

And that is pretty much typical of kingfish sightings throughout.

Richard Coles, of Pleasantville, also had a 14-inch kingfish on the Brigantine beach.

But those catches were eclipsed by the 1.4-pound, 15 1/2-inch kingfish certified at One-Stop Bait and Tackle in Atlantic City. Larry Clark, of Galloway Township, registered it in The Press Fishing Contest and the Atlantic County Derby.

Three of them were picked off Thursday, all from the Brigantine surf.

Weakfish have not returned to the mouth of the Mullica River, where they were gathering before the latest puff. Mitch Brown at Chestnut Neck Boat Yard said Friday the locals are making up for it by catching lots of blowfish in the Great Bay area, from the clam stakes out to the fish factory. Brown said the fishers anchor, put out a clam chum pot and fish with specially made blowfish rigs with clam and bloodworm as bait.

He also said those fishers also are picking up some porgy.

Noel Feliciano at One-Stop is the correspondent who described the clean water. Noel makes it a point to bug out of the shop for a short time almost daily to take some video of the local fishing scene in Atlantic City that he puts up on his website.

He said there are a lot of tautog and a few short bass. He also reported a couple of kingfish were caught off one of the jetties, along with an occasional weakfish.

Those 1- to 4-pound bluefish seem to be widespread and are biting on mullet, which continue to be plentiful, and chasing lures and poppers.

And, it sometimes is interesting this time of the year to check in with what’s going on to the north to get an insight on what might be headed our way and, maybe, when.

According to Fisherman’s Den in Brielle, they are waiting just like we are. The report from Friday sounded too similar to what we’re doing here. Small bluefish, a few short bass. They have not seen any kingfish there this year. Kingfish sometimes spread that far north but apparently not this year.

The New Jersey Beach Buggy Association holds its Great Fall Classic next Saturday, Oct. 15, in North Wildwood. This is an Association of Surf Angling Clubs-sanctioned tour event. Signups are $50 for six-member teams and $10 for individuals from 6-7 a.m. at the Anglesea Fire Hall. Fishing segments are 7:30-10 a.m. and 10:30 a.m. to 1 p.m.

And the Long Beach Island Surf Fishing Classic launches today with its usually sold-out surf-fishing clinic. The Classic offers many prizes, topped by $1,000 for the heaviest striped bass, along with $400 two-week segment and $125 weekly prizes for each. The contest runs to Dec. 4. Sign up at Jingle’s, Fisherman’s Headquarters in Ship Bottom, Surf City Bait and Tackle and Captain’s Quarters in Beach Haven. Registration is $30 for adults and $15 for youth 17 and under. 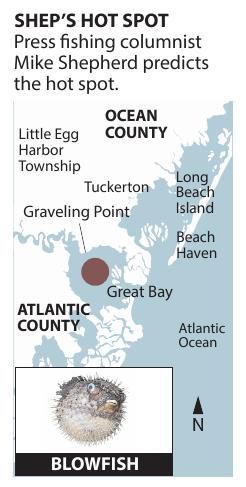 Some nice tautog are being caught around the rockpiles, and a 28-.5-inch stripier was caught Saturday in the Margate MVPs.

Lots of stuff happening over these awesome weather days.