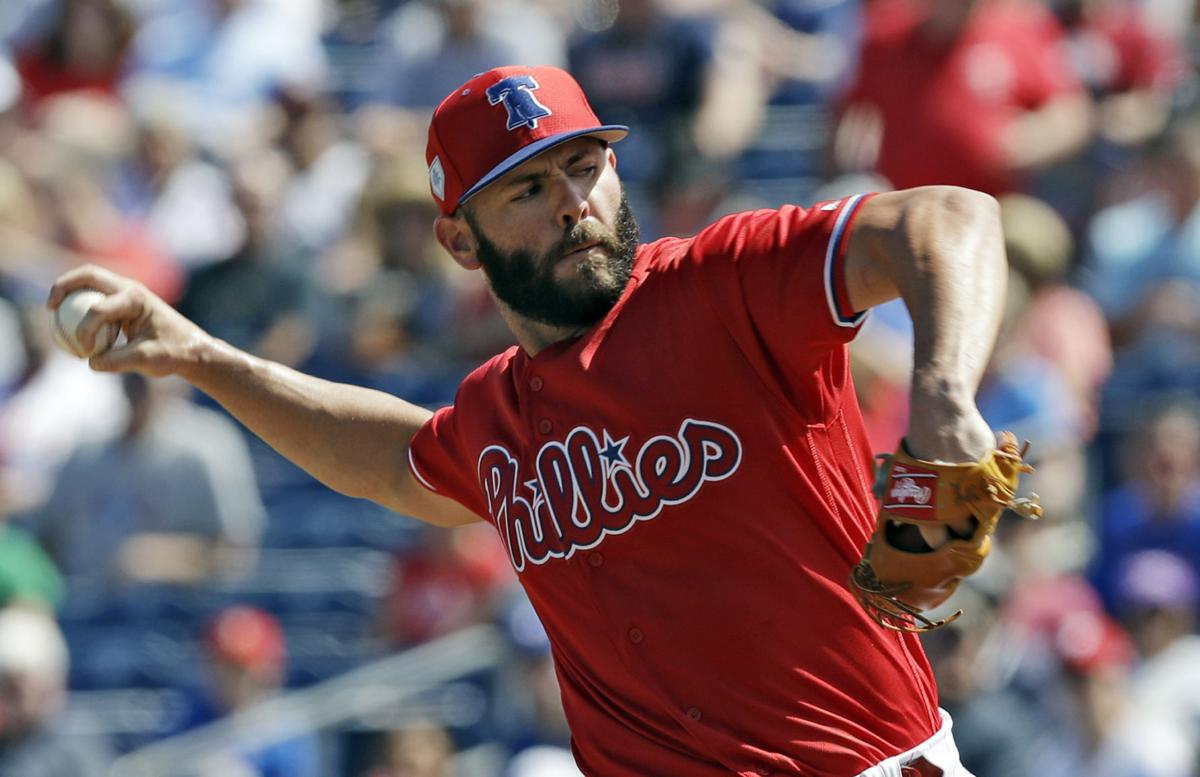 PHILADELPHIA – Jake Arrieta signed a three-year, $75 million contract with the Phillies in March of 2018.

It was a sign the Phillies were prepared to be big spendors on the free agent market and spare no expense to make the postseason.

On Tuesday night, Arrieta’s Phillies career might have come to a frustrating end.

The starting pitcher hobbled off the field with a right hamstring injury in the top of the sixth inning of the Philies 4-1 win over the New York Mets. Phillies manager Joe Girardi said Arrieta will have the hamstring tested Wednesday to determine how severe the injury is.

Despite how the injury looked, Arrieta was optimistic after the game.

"I'll be back for the playoffs," Arrieta said. "There's no question in my mind about that. I think I can be back sooner than that."

Arrieta missed 17 days with a right hamstring strain when he pitched for the Chicago Cubs in 2017. Beginning Wednesday, the Phillies will play 13 games in 12 days to finish this COVID-19 shortened, 60-game season.

The ramifications of Arrieta’s injury are enormous as the Phillies fight for playoff spot. If the season ended Tuesday night, Philadelphia (24-23) would be one of the National League’s two wild-card teams.

The Phillies starting rotation is in shambles. Aaron Nola, Zach Eflin and Vince Velasquez are the team’s only starting pitchers without health issues. Rookie Spencer Howard is on the 10-day injured list with a shoulder issue. Zack Wheeler, who missed his last start with a torn nail on the middle finger of his pitching hand, is scheduled to start Wednesday night against the Mets.

Arrieta’s contract included a $22.5 million team option for 2022 that the Phillies will certainly not pick up, making the pitcher a free agent at the end of the season. Arrieta got the win Tuesday, which means he could finish his Phillies career with a 22-23 record in 64 career starts.

Arrieta never really got untracked in Philadelphia. He signed the contract during spring training in 2018 and finished that season 10-11 with a 3.96 ERA.

His 2019 season ended in August with 8-8 record because of a bone spur in his pitching elbow.

The hamstring injury happened in the top of the sixth. Arrieta threw a changeup with one out and two runners on.

The pitch hit Mets shortstop Andes Gimenez. But all attention was focused on Arrieta, who immediately grabbed his right hamstring. He hobbled off the field.

"There was nothing before that pitch," Arrieta said. "As I loaded on my right side and made that move toward home plate, I felt like I got shot. I knew as soon as it happened there was no way I could throw another pitch tonight."

Before the injury, Arrieta gave one of his grittiest efforts of the season. He threw 5 1/3 innings, allowing eight hits, walking one and striking out four.

The Phillies desperately needed a quality from Arrieta on Tuesday. They had lost four straight, heading into the game.

It was not only the starting rotation that had been ravaged by injuries but position players as well.

Philadelphia put first baseman Rhys Hoskins on the 10-day injured list a hurt left UCL. Catcher J.T. Realmuto is day-to-day with an injured left hip. Outfielder Jay Bruce is trying to make his way back from an injured left quadricep. Roman Quinn did return from a concussion and start in center field Tuesday.

"This is a group that has been resilient all year long," Girardi said. "This team has bounced back a lot. We're in a stretch where we're playing a ton of games in a short period of time. I think it is next man up. The next guy just has to get the job done."