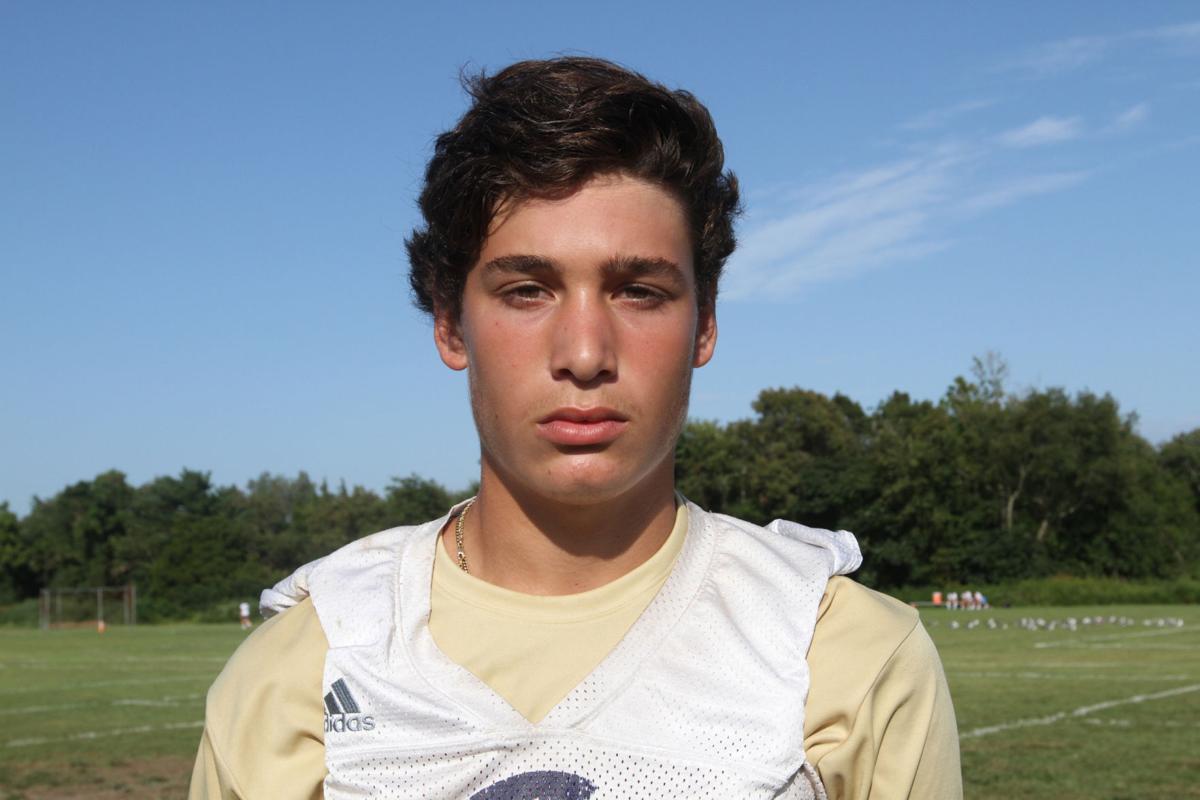 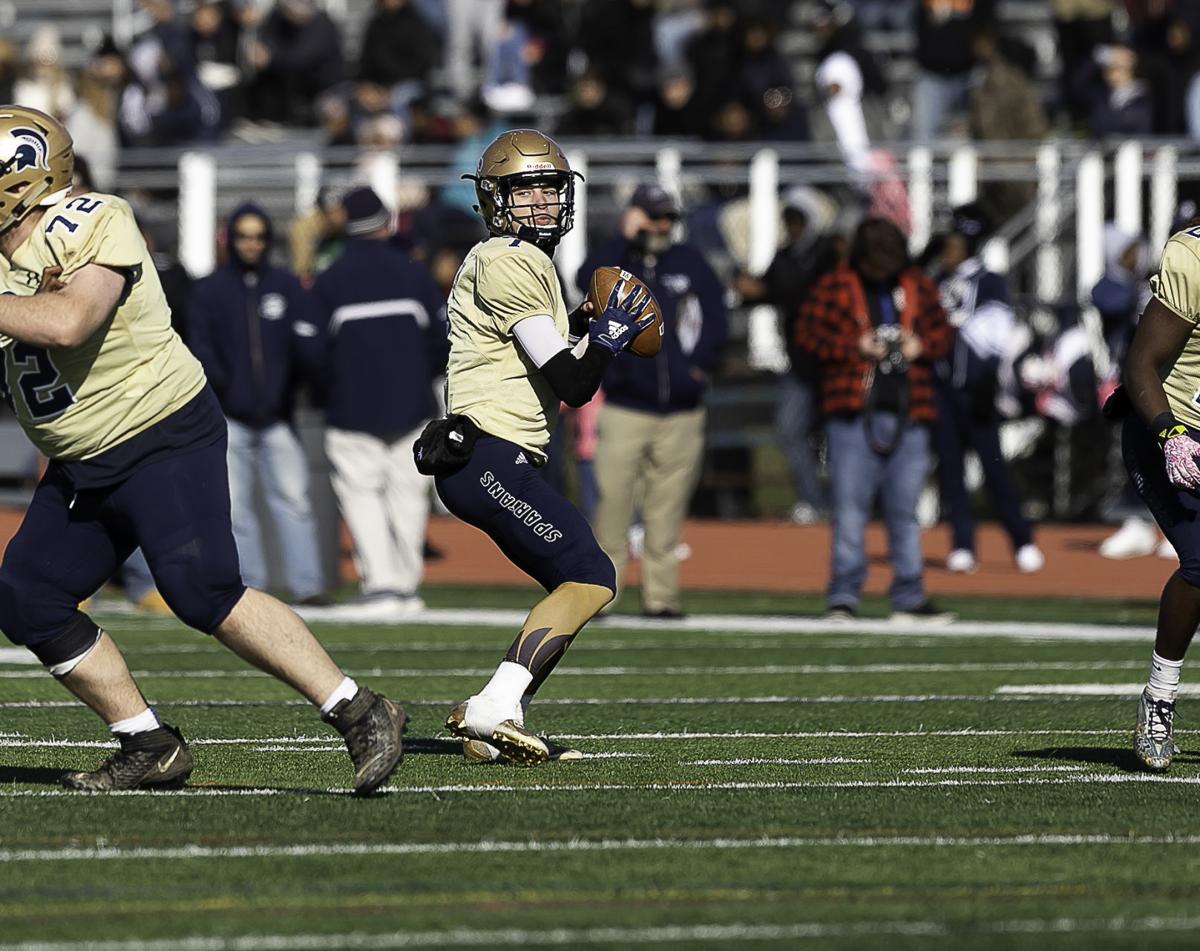 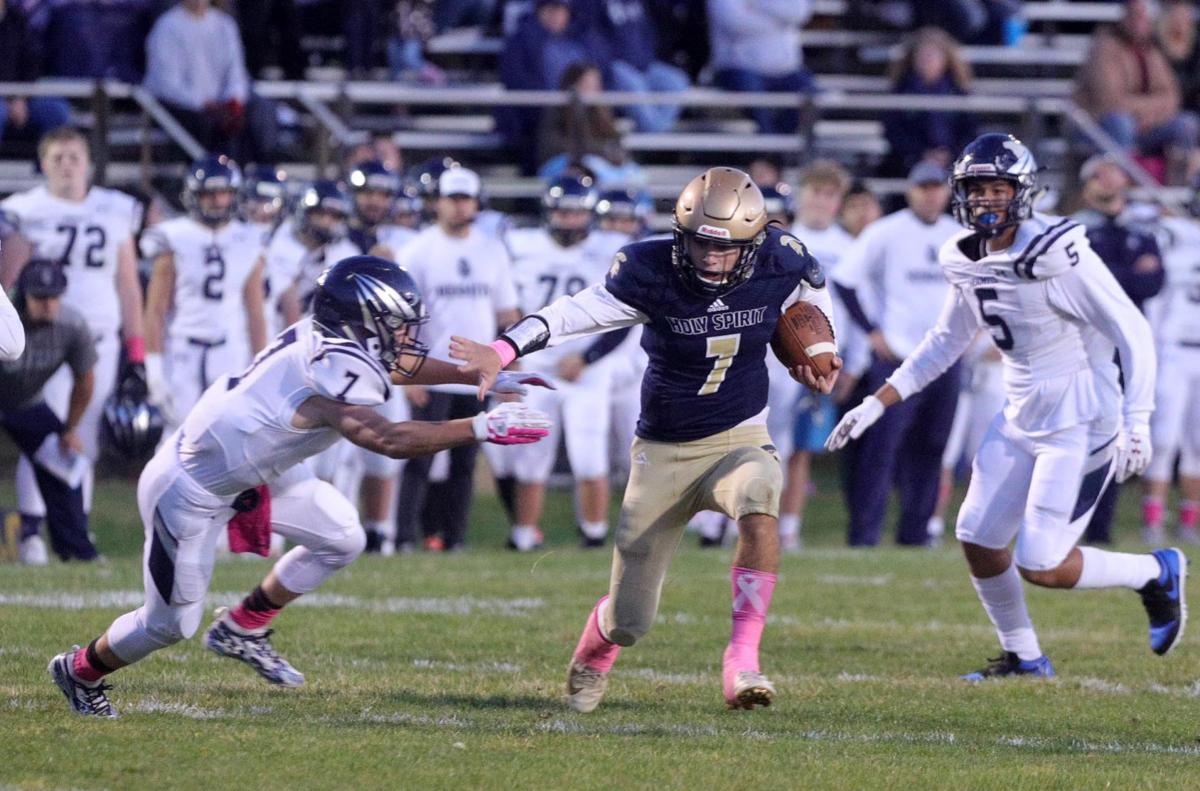 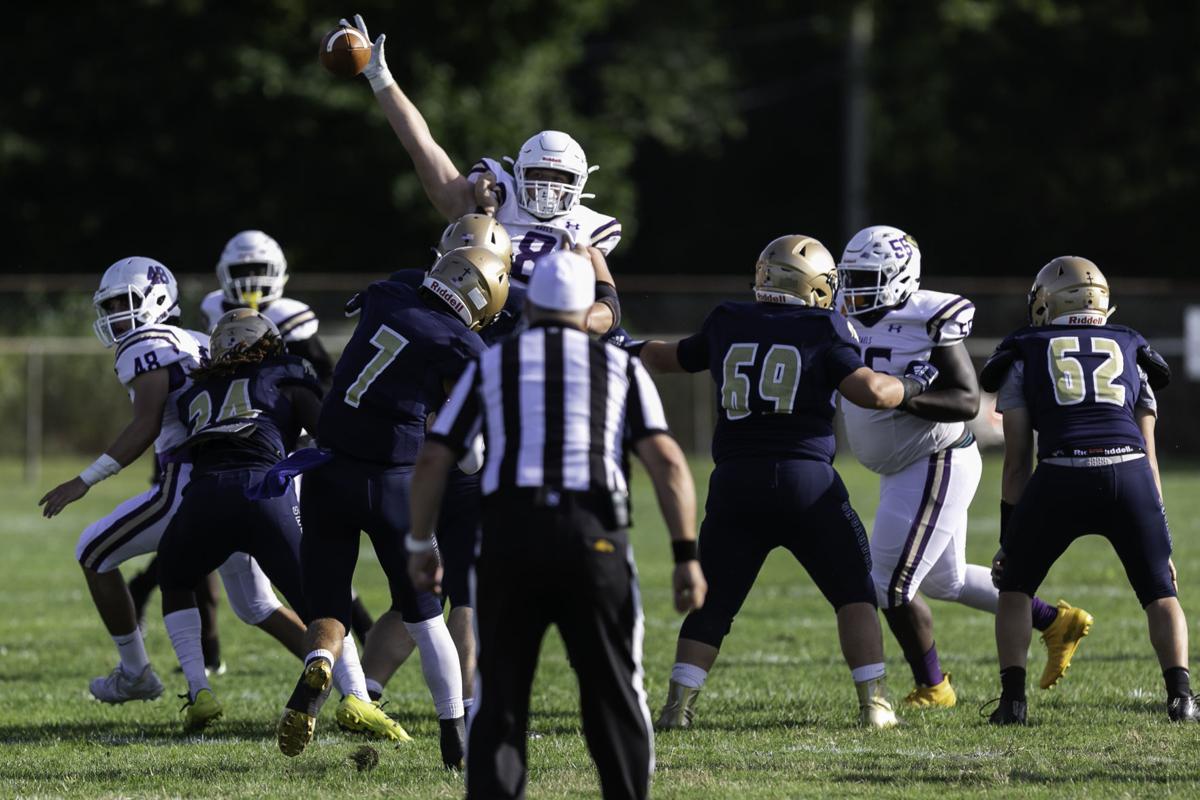 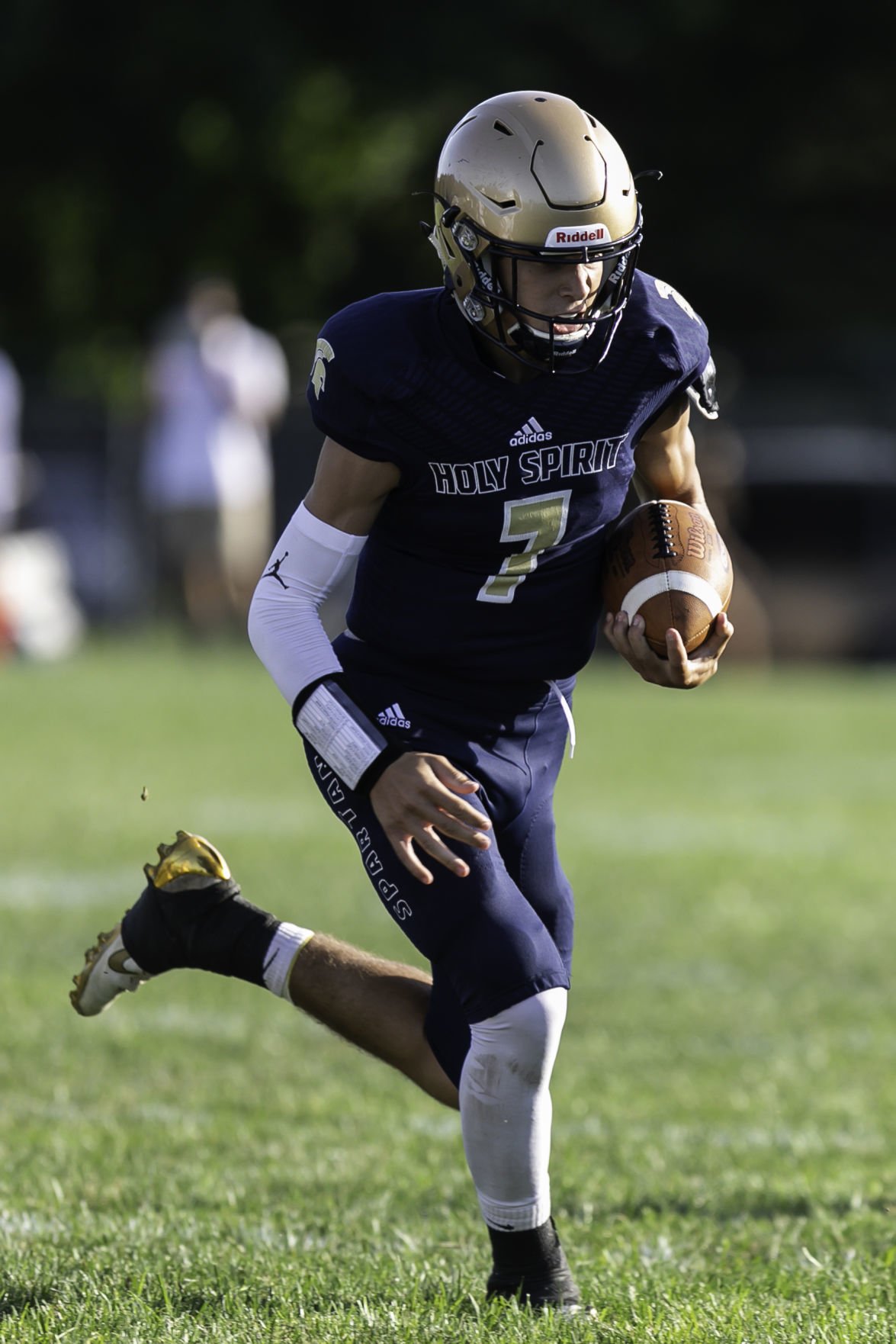 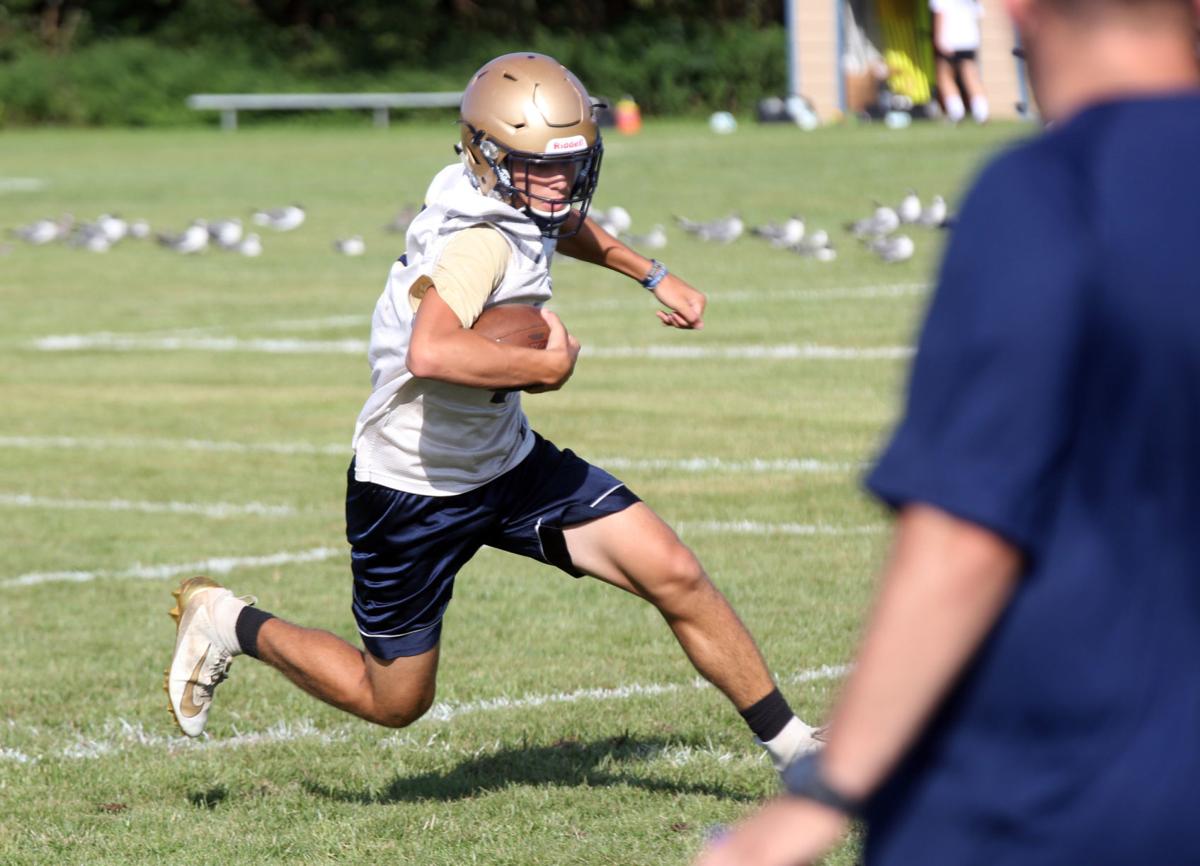 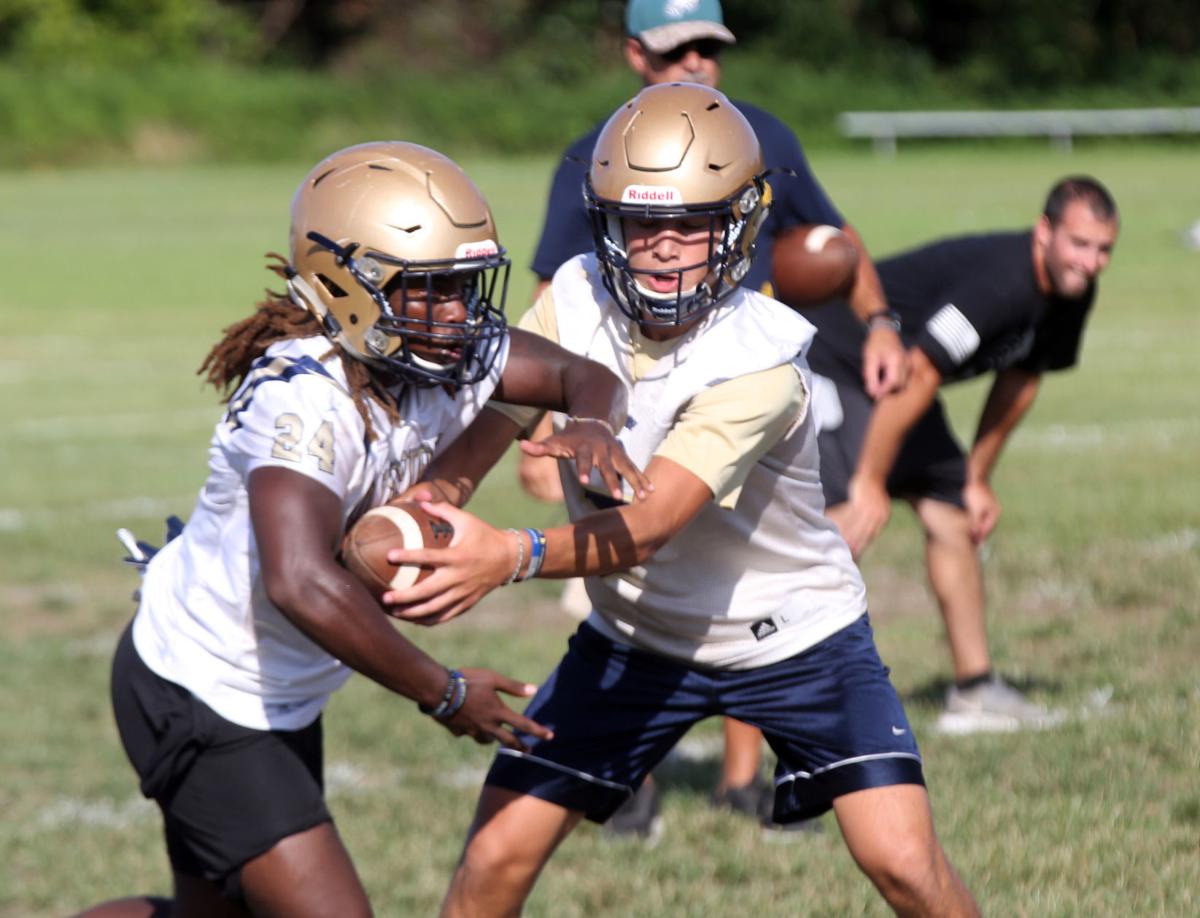 Holy Spirit running back E’lijah Gray, left, gets a handoff from quarterback Trevor Cohen during a practice earlier this month. Gray rushed for 1,233 yards and 15 touchdowns last season. 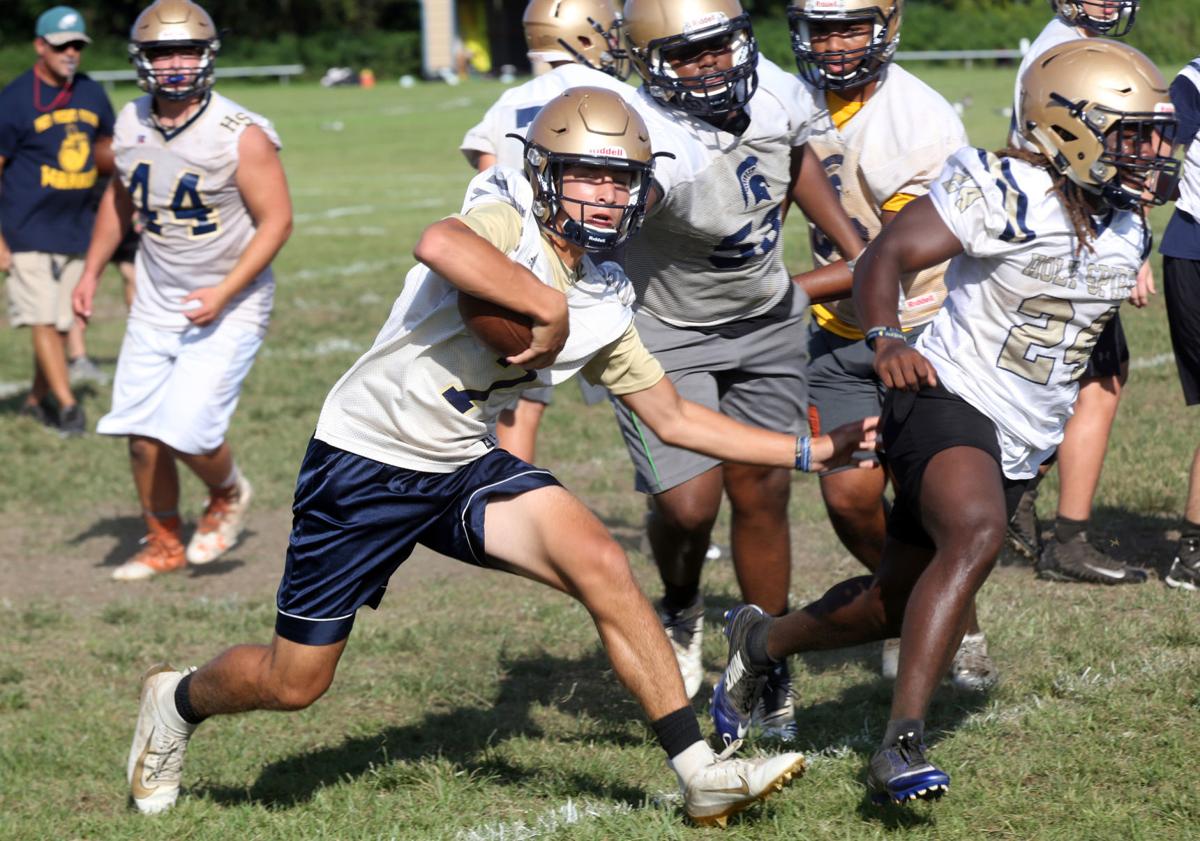 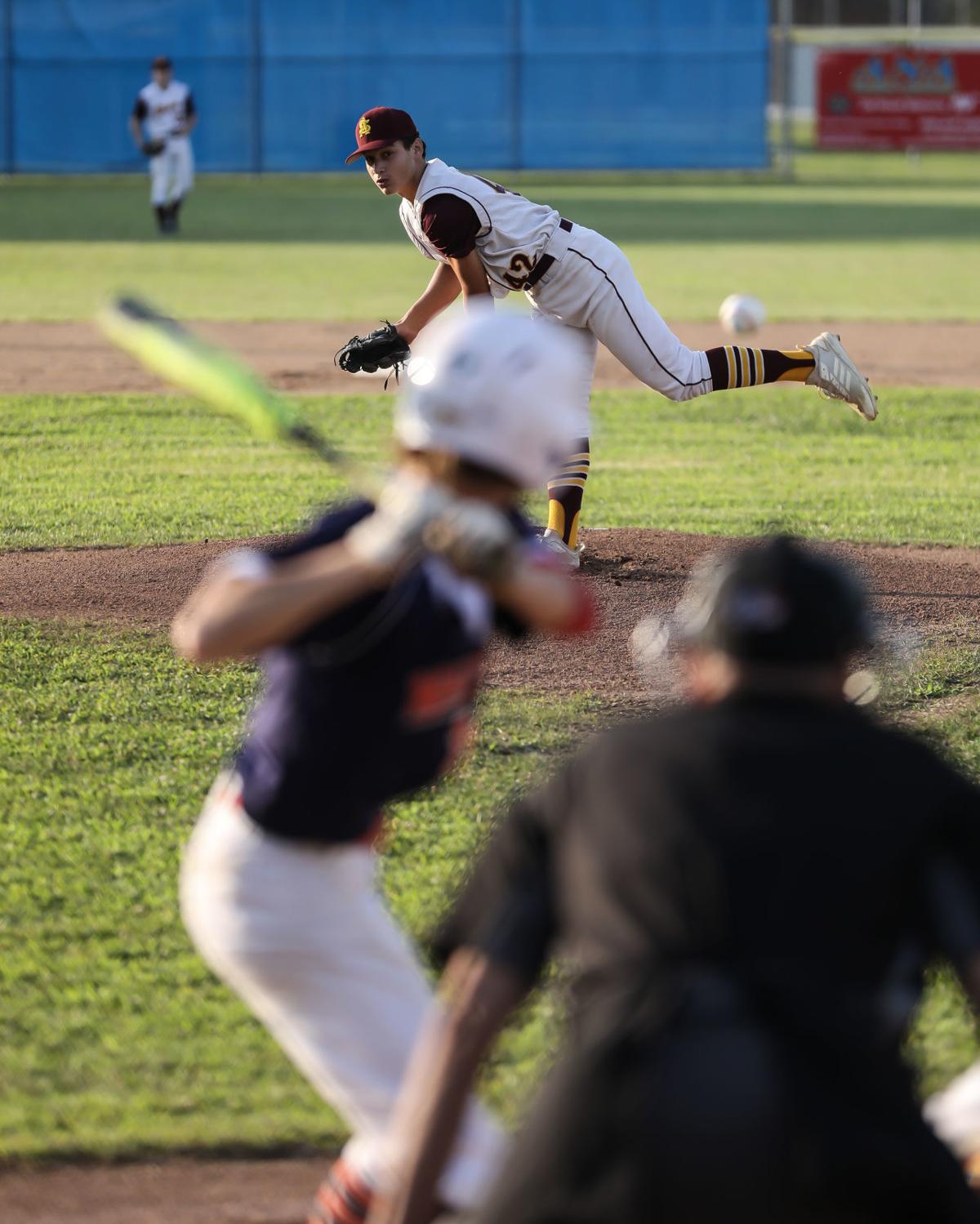 Holy Spirit High School two-sport standout Trevor Cohen is only a sophomore but already has chosen which sport and where he’ll play in college: baseball at Rutgers University.

For Holy Spirit, the 6-foot-1, 175-pound Cohen is a center fielder and a pitcher.

“I’ve thought about it long and hard,” Cohen said of his early college decision. “Rutgers is what I’m looking for in a school. I wanted to go to a school close to home. It checked off all the things I wanted. I called (Rutgers baseball) coach (Steve) Owens and told him I’m in.

“I’m pretty excited about playing for Rutgers in the Big Ten (Conference). There’s a lot of travel, and they play really good teams. A lot of pro scouts are watching the Big Ten.”

Cohen also quarterbacked the Spartans’ football team to a 38-0 win over rival St. Joseph on Dec. 8 at Rutgers in the state Non-Public II championship game.

“I played football there, and I really liked the school,” Cohen said. “When the quarantine is over, I intend to go there and see the rest of (the campus).”

Taking baseball over football was a clear choice for Cohen.

“I’d love to play college football, and I didn’t get the looks (from college recruiters) like I had in baseball,” he said. “I’ve played both all my life. I’ll play both throughout high school. My arm gets a lot stronger for football, and it transfers over to baseball.”

Cohen said he is primarily a center fielder rather than a pitcher.

“It’s a lot of fun,” he said. “I fly around and make plays. That’s my favorite part about it.”

Cohen also visited Boston College and talked to several other schools. He won’t sign a national letter of intent until his senior year.

The Rutgers baseball team was 6-9 this spring before the COVID-19 pandemic ended the college season. In their final game, March 10, the Scarlet Knights beat Monmouth 5-2. Freshman first baseman Jordan Sweeney (Egg Harbor Township) played in 12 games for Rutgers this season and batted .438 (7-16).

Normane coached the Spartans previously, and Downey was his assistant from 2014-17. Normane graduated from Rutgers in 2003, Downey in 2008.

“We had the team out (practicing) for a week before the shutdown, and Trevor is the most talented sophomore I’ve ever coached,” said Normane. “His upside is incredible. He has foot speed, bat speed, and he’s got a ton of confidence from playing quarterback in the fall. He knows the game (baseball). He runs down balls in the outfield. He’s an intelligent player and highly skilled. He’s ready for the mound when you need him.”

Cohen hit .290 (16-55) for Holy Spirit last year as a freshman, with five doubles, 15 RBIs and seven stolen bases. The Spartans were 15-8 and reached the South Jersey Non-Public B semifinals.

“Trevor is a great kid from a great family,” Downey said. “He has a laid-back demeanor, but he kicks it up for both baseball and football. He had good stats last year, and that was as a freshman against a pretty strong schedule. His potential is through the roof.”

Cohen hasn’t yet decided on a college major.

Mallen boys want a chance to finish youth career where it started: Must Win

Ryan and Gavin Mallen feel closest to their father, Al, on the sports fields of Egg Harbor Township.

St. Augustine sports must stop playing after school goes all virtual due to COVID-19

The St. Augustine Prep football team on Saturday morning reviewed the video of its scrimmage against Woodrow Wilson and began to prepare for i…

Phillies would've made playoffs if they won. They did not.

In a fitting continuation of nearly a decade of ineptitude, the Phillies couldn’t even help themselves Sunday afternoon.

Not many programs have siblings playing at the same time.

The ShopRite LPGA Classic returns to Atlantic County this week for the 32nd time.

Kickoff 2020: A quick look at Pleasantville

Javier Garcia is devoted to Pleasantville.

LPGA Tour golfer Jaclyn Lee withdrew from the ShopRite LPGA Classic on Tuesday after her caddie tested positive for COVID-19.

PHILADELPHIA — Joe Burrow kept his team from losing again. So did Carson Wentz after several mistakes.

LAKE BUENA VISTA, Fla. — Los Angeles Lakers coach Frank Vogel was smiling when he was asked what it felt like to finally reach the NBA Finals …

Holy Spirit running back E’lijah Gray, left, gets a handoff from quarterback Trevor Cohen during a practice earlier this month. Gray rushed for 1,233 yards and 15 touchdowns last season. 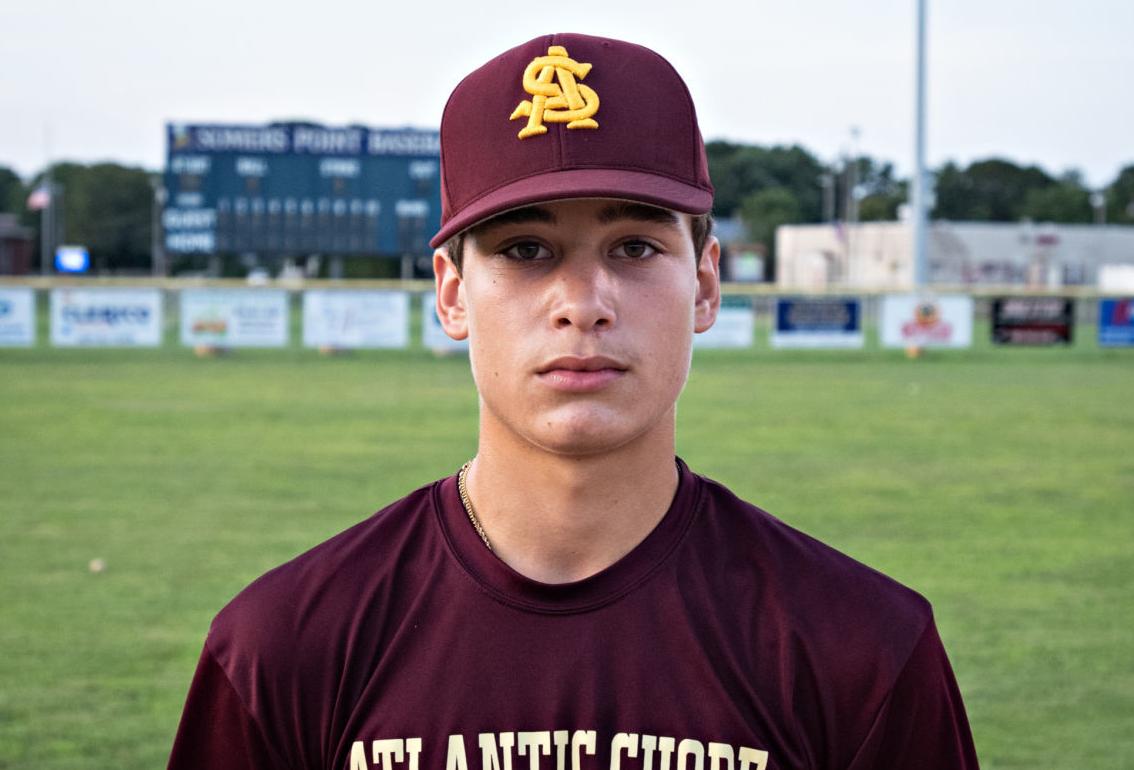 Trevor Cohen On July 16th 2019, at Fehrle Field in Somers Point, the 15-and-under Atlantic Shore Babe Ruth baseball team, the defending World Series Champions, practice for their upcoming game where they are hosting the Mid-Atlantic Regional which starts in Somers Point on Saturday. Trevor Cohen, 15 of Brigantine.