Wade Allison and Tyson Foerster have something in common beside big bodies, wicked shots, and being the best right-wing prospects in the Philadelphia Flyers’ farm system.

Both build strength in the offseason by working on their respective family farms.

Oh, they still work out in the gym, and do lots of summer skating. But their farm work gives them added muscle, along with some quality time with family members.

Before heading to near Toronto last week to work on the ice with several NHL players and prospects, the 6-foot-2, 205-pound Allison spent several weeks working a John Deere baler and doing several other odd jobs on his dad’s farm in Myrtle, Manitoba, Canada, about 45 minutes southwest of Winnipeg.

“It’s great to work with my Pops,” Allison said. “We’ve got some cattle and a couple hundred acres of wheat and all different stuff. I move the cows out from our pasture here. We move them a couple miles down the road so they have grass to eat and stuff like that, and we’ve been fencing that area up. And there’s always something broken on the farm, always something to be fixed. You’re never caught up.”

He enjoys the work but mostly being with his dad, Kent.

“It’s time I get to spend around my dad, which I don’t normally get to do” during the season, Allison said. “So I’m more than happy to do it.”

Foerster, a first-round selection (23rd overall) in 2020, has worked on his grandparents’ sheep farm for several summers in Alliston, Ontario, where he stacks hay, works the fields with his tractor, and tends to the animals. He and Allison spent a lot of time talking about their farm adventures while they were teammates with the AHL’s Lehigh Valley Phantoms this season.

“It’s pretty cool knowing there’s a guy like that who is kind of the same as me, someone who just grinds it out on a farm,” said the 6-2, 194-pound Foerster, who is working with former NHL player Gary Roberts this summer, trying to improve his skating.

Both wingers had strong showings with the Phantoms after overcoming injuries. Foerster, 19, missed the first month because of a small fracture on his right shinbone, and he suffered a separated collarbone late in the season. He has recovered from the injuries.

Allison, 23, injured his right ankle during the Flyers’ training camp and needed surgery.

“I had a floating bone in my heel, and it was messing with a couple tendons and muscles,” he said. “It was kind of affecting me around my Achilles area. I was really struggling with it. At first, I thought I may have ruptured my Achilles, and I was pretty nervous for a bit. It ended up just being a quick surgery, and they took out a two-centimeter bone.”

He didn’t play for Lehigh Valley until March, meaning it was about a year since he was last in a game, back when he played for Western Michigan University.

Allison showed no ill effects from the ankle surgery. In 10 AHL games with Lehigh Valley, he had nine points (four goals, five assists) and was plus-8 before being recalled by the Flyers and making his NHL debut. He had seven points (four goals, three assists) and was plus-1 in 14 games with the Flyers, during which he was one of their most noticeable players. Allison was constantly getting in the goaltender’s face, creating havoc in front of the net, and displaying a hard shot.

“I just went there and tried to enjoy my time,” he said. “Soak it all in and, every once in a while I’d sit back and (think), ‘Wow, I’m really doing this. This is something I spent my entire life dreaming of.’ So it was good for me to see that all my hard work had kind of paid off. However, this is just the beginning. This is just the tip of the iceberg. But it’s good to know I’m going in the right direction and doing the right things.”

Foerster was an underage player in the AHL who was allowed to play in the league only because the Ontario Hockey League shut down because of COVID-19.

He made the most of his chance. The right winger had 10 goals in just 24 games while playing against mostly older players.

“I think it helped me hugely,” he said of his time in the AHL. “All those guys are strong. In the (OHL), the third and fourth lines aren’t as good. But all four lines are good (in the AHL), and it’s a grind, and you just have to work for everything. I think I showed that I can play on that level. I know there’s another step to get to.”

Foerster is not yet at the level of Allison, who is physically more mature and four years older.

“I obviously still have to prove myself,” Allison said. “I’m still a young guy and only got in a short stint” with the Flyers. But in that short stint, I feel I do belong there. That it’s a place I can come into and have a positive effect.”

Toward the end of the season, Flyers coach Alain Vigneault said he doesn’t put much stock in what a young player does after a call-up late in the year, saying he needs a “bigger sample size to have a better assessment of his play.”

Still, Vigneault and the Flyers’ brass liked what they saw from Allison, a player whose rugged style was a breath of fresh air to a stagnant team that didn’t have an identity and wasn’t hard to play against.

Allison appears to have a good chance to make the team out of training camp in September, while Foerster will probably play in the OHL unless the AHL decides underage players who were in the league last year are permitted to play there again.

Wherever he plays, Foerster said, he will make the best of the situation and keep improving.

Allison will try to show that his late-season play wasn’t a fluke.

“I haven’t set any expectations yet,” he said. “I’m going to show up every day and do the best I can. And whatever happens, happens. I’m not going to try to look into the future too much.”

Allison went through a slew of injuries — a torn ACL in his right knee, and a shoulder problem — while at Western Michigan but is now on track to be the type of player the Flyers foresaw when they drafted him in the second round (52nd overall) in 2016.

And beating goalies is much more fun than building fences and doing farm chores.

At least he doesn’t have to milk cows, Allison said.

“We’ve just got meat cows,” he said. “We’ve got steaks and burgers out here. I’m very happy about that.”

It’s a no-frills farm with a hardworking, no-frills hockey player, one whose fiery emotion and deadly shot should be a welcome addition next season.

Flyers to allow fans at training camp next week; team will be 100% vaccinated for season

Philadelphia’s Wade Allison tries to get a rebound from New Jersey goalie Scott Wedgewood during a game in May in Philadelphia. 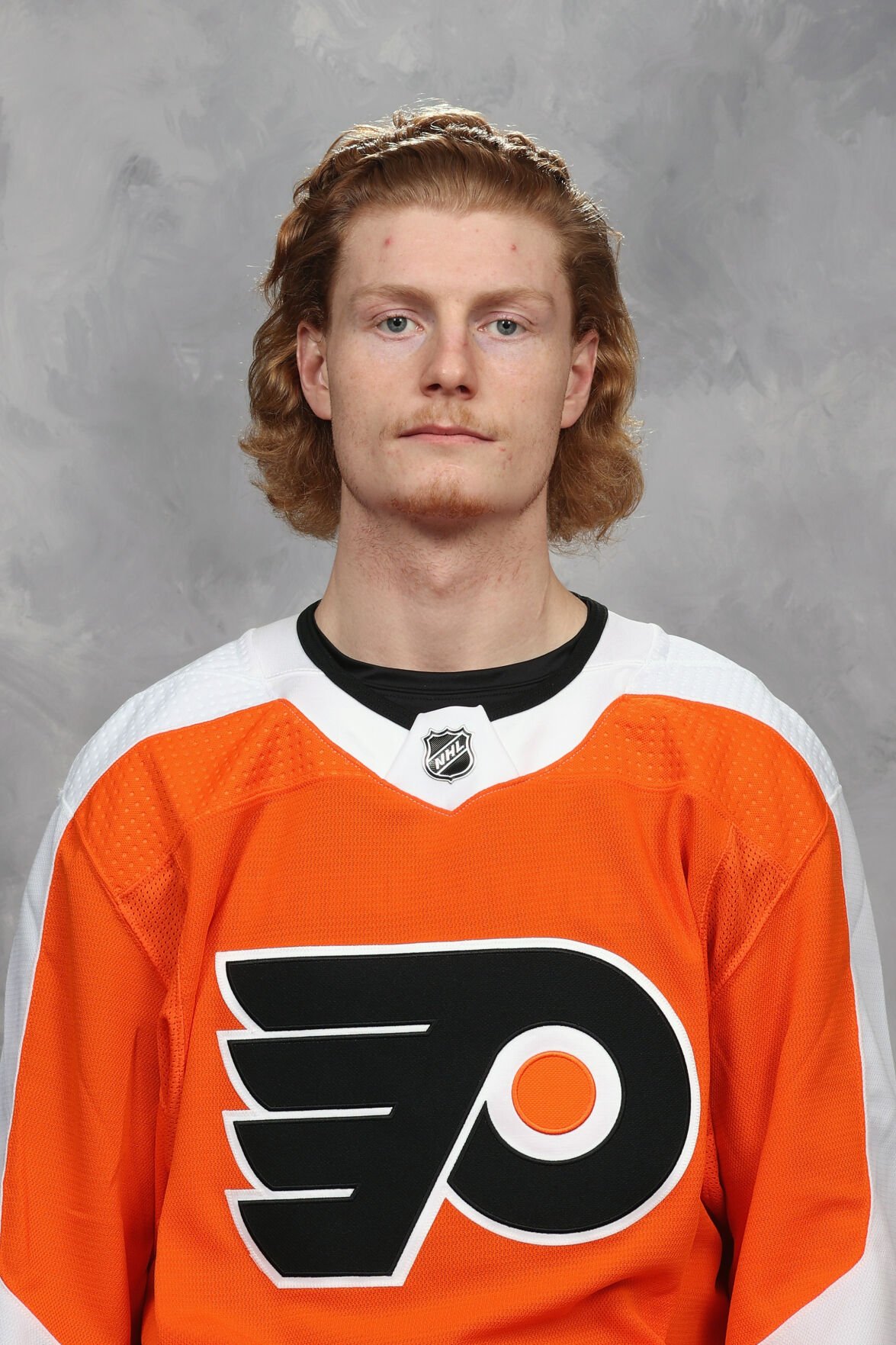