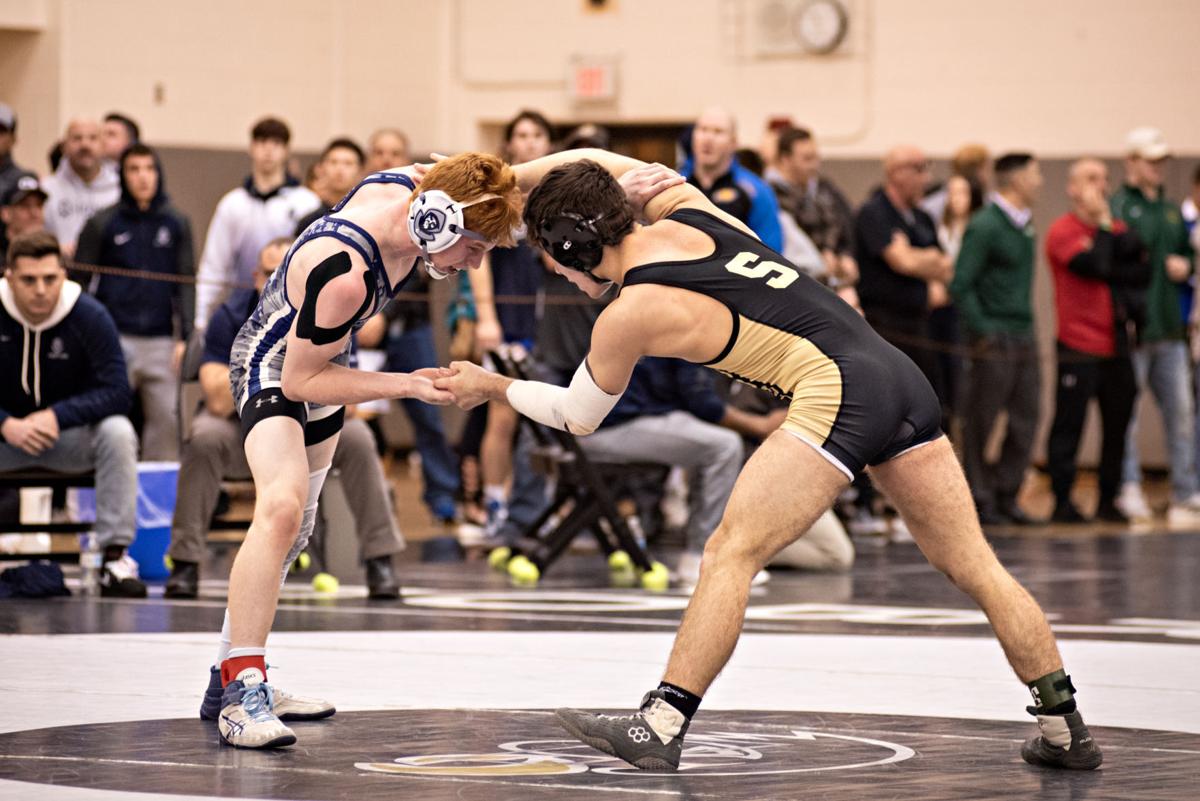 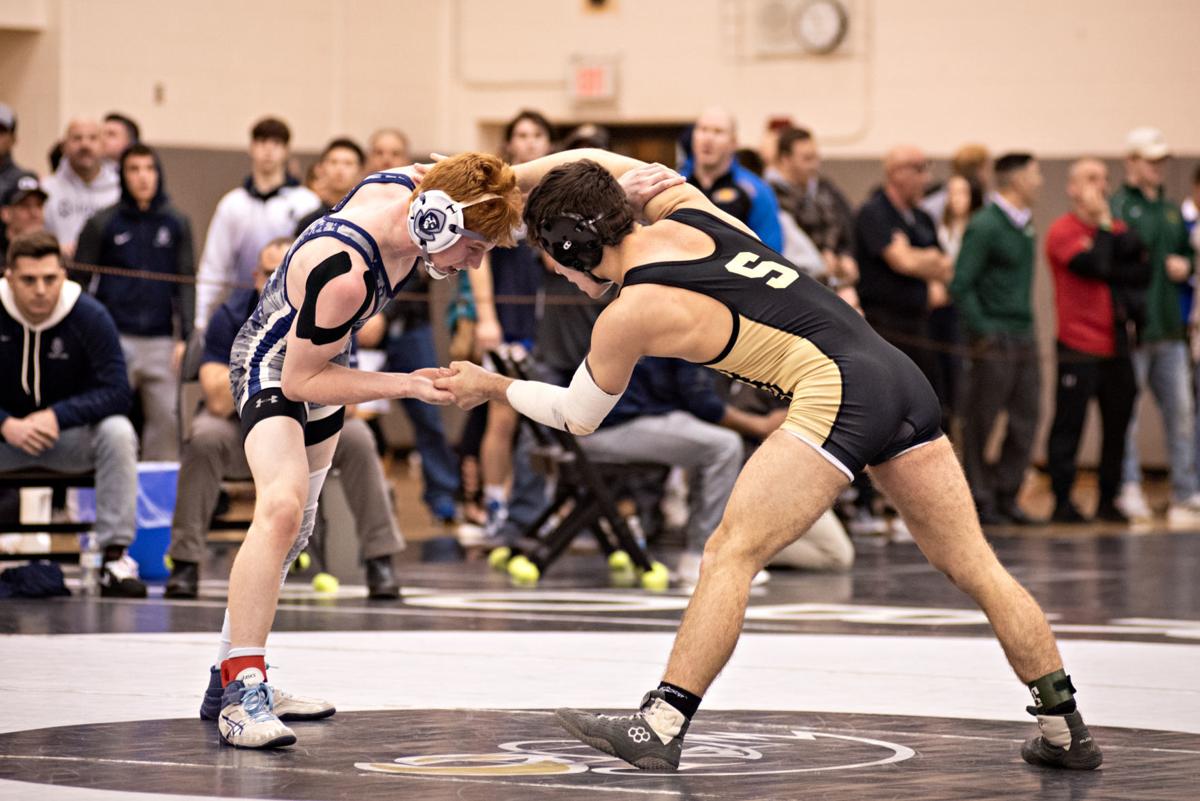 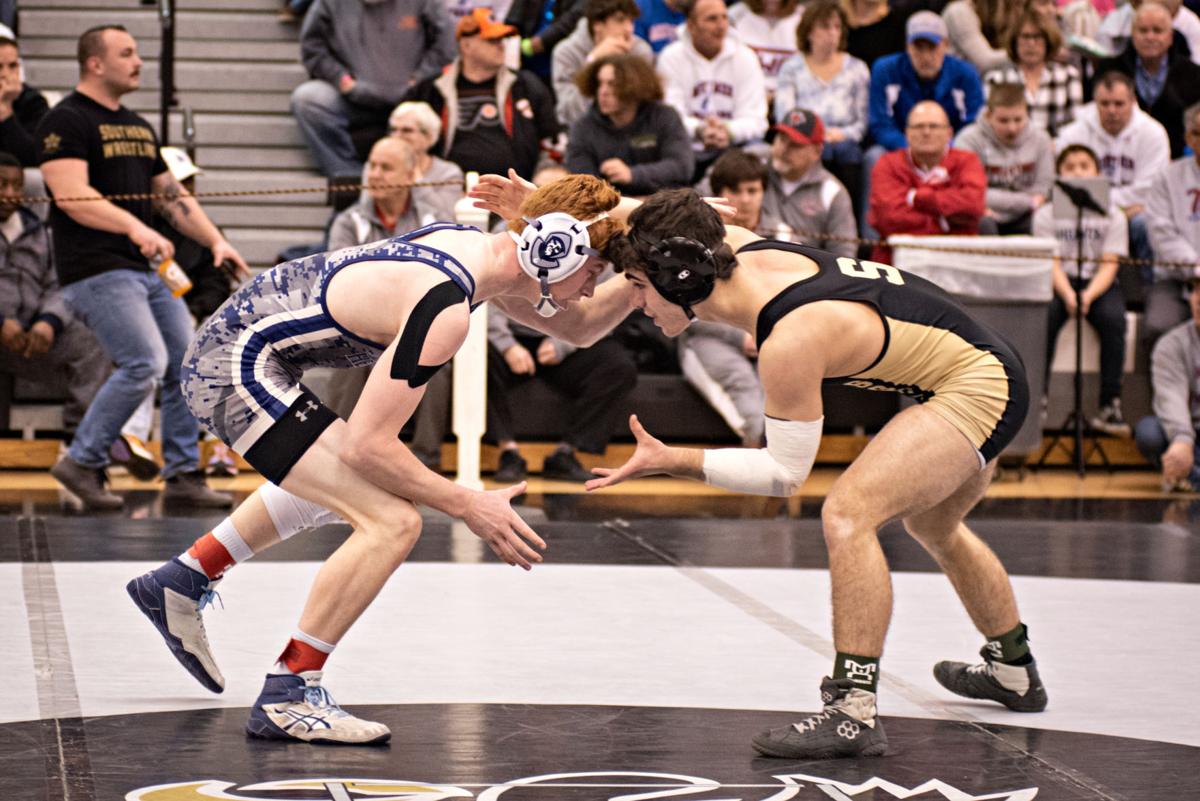 On February 29th, 2020, at the Egg Harbor Township High School, Region 8 wrestling wraps up the semi-finals with finals to be held later in the afternoon. (l-r) St.Augustine’s Trey McLeer vs. Southern Regional Eddie Hummel. 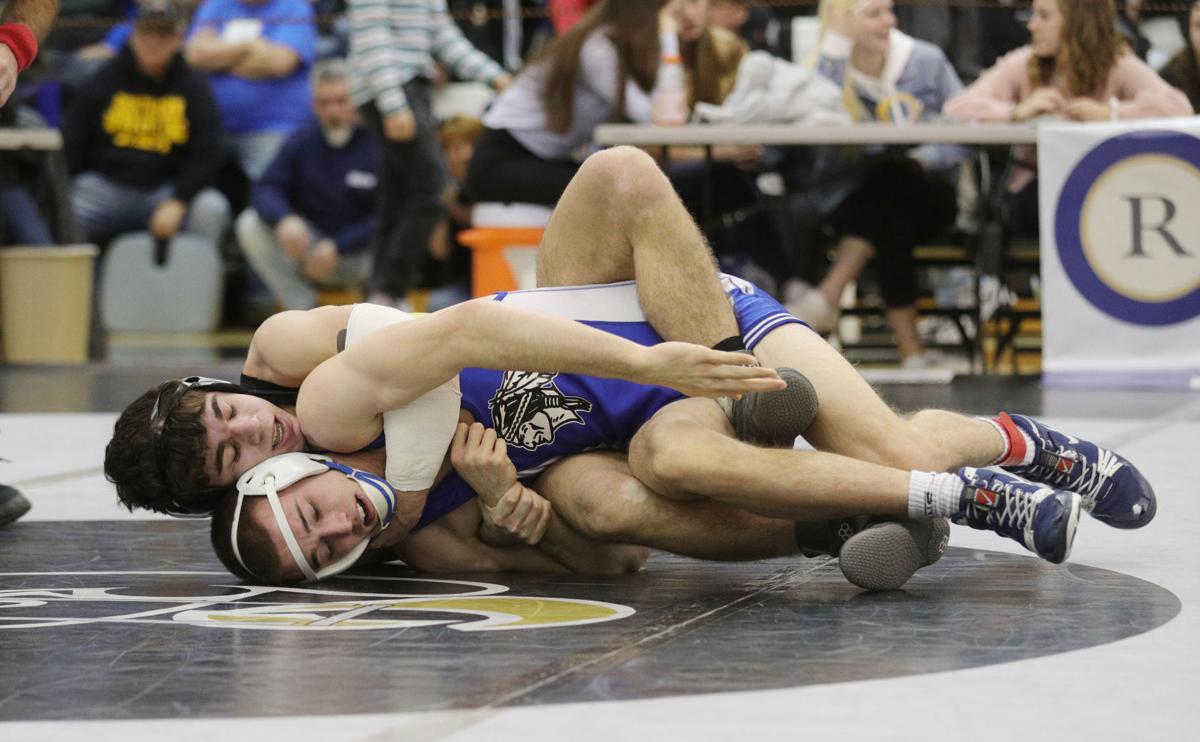 Eddie Hummel fell one match short from reaching his goal this season. But there is no doubt that his senior campaign was still a success.

Hummel is The Press Wrestler of the Year.

“I’m happy about it,” Hummel said about his season. “I do wish I could have won that last match (the state final). But it’s kind of a live-and-learn situation.”

In the state tournament, Hummel suffered a 3-2 loss on an ultimate tiebreaker in the finals to Joseph Olivieri of Hanover Park.

An ultimate tiebreaker is when the score is still tied after sudden victory (or overtime) and two tiebreakers.

The latter happened to Hummel.

”Yea, he rode me out for 30 seconds, but who is to say that if I would’ve went on top that I wouldn’t have ridden him out for 30 seconds,” Hummel said. “It does stink that it comes to a sudden end, but you can’t change the rules. It is what it is.”

Hummel had competed in preseason tournaments, including the Mobbin’ Classic, defeating Olivieri, a three-time state champion and Rutgers University commit, 7-2, to capture the title. But Olivieri was more cautious at states, Southern coach Dan Roy said.

When the two wrestled at Mobbin, Hummel scored each time Olivieri tried to wrestle (or make attack moves). At states, Olivieri, who was given a stalling warning at one point, wrestled more conservative.

Hummel led 2-1 late in one of the overtimes before Olivieri earned an escape point. Roy called the final result “hard to stomach.”

“It was not lack of preparation or effort,” Roy said. “I feel he wrestled a good tournament. He was down in his quarterfinal match and won. I felt there were a couple opportunities he could’ve scored. But I think that he was the aggressor the entire match, taking more chances.”

Hummel is committed to wrestle at the United States Military Academy, an NCAA Division I program.

After the heartbreaking loss, Southern coach Dan Roy told Hummel that many wrestlers who did not win state titles in high school win national championships or become All-Americans in college, and to not let the outcome define him.

“It is really about what I do in the practice room now,” Hummel said. “I have to work hard and focus on what I can do for myself.”

Hummel improved greatly this season, staying after practice to train and study his opponents, Roy said. The second-year coach added Hummel was on “another level.”

“He is up there with one of the better wrestlers I ever coached,” Roy said. “We had a lot of great wrestlers that have come through (Southern) to go on and do amazing things. You can’t replace a kid like that. He is just a great kid. He is respectful. He cares about people. He works hard. He raises the level of your room.

“I just feel so bad he wasn’t able to get (the state title). But you can’t measure success in one tournament. He has the tools to be successful in college”

Hummel placed sixth in 2019 and third in 2020 at the state tournament. This season, Southern had 11 duals in three weeks. Hummel was bumped up to 145 and 152 in multiple meets, going 9-1, which made him that much better.

“The focus was on the end of the year. I feel like he was at his best for the state tournament,” Roy said. “Going into the state tournament, and seeing how he was wrestling, I was saying to myself, ‘there is no way he is not winning,’ because I just felt he was the best wrestler in the state hands down

Hummel’s favorite memory this season was watching his teammate, sophomore Conor Collins, win his quarterfinal and semifinal bout in the state tournament, making it to double overtime before losing in the finals. Hummel’s sudden victory win in the state semifinals is up there, too.

“I was glad I was able to place (and) to wrestle in the state finals with Conor,” Hummel said. “That was fun being the only Southern kids in the state finals. I just enjoyed being around the team this year. Everybody made it a good year, even though it was a shortened and a little bit of a weird year.”

Hummel’s personality and athleticism will be missed.

“He was a pleasure to coach. I’m grateful to have coached him,” Roy said. “I’m proud of him and how he represents himself on and off the mat. That’s the bigger picture. Not just being a great wrestler, but also a great person. In my opinion, he is the full package.”

St. Augustine Prep was a young team this season but still sent seven wrestlers to the region tournament. Six placed in the top eight of their weight class and made it to the state tournament.

Three earned state medals — the first time in program history that three placed at states in a single season.

The Hermits are the Team of the Year.

“We have a good group of young guys that worked real hard in a shortened season with a bunch of obstacles (the Hermits were shut down for the first two weeks of the season due to COVID),” St. Augustine coach Bill Ward said. “They worked really hard and stuck it out, and in the end it showed their character.”

Alex Marshall, Kaden Naame, D’Amani Almodovar, Jake Slotnick, Richie Grungo, Brock Zurawski and Dennis Virelli, all either sophomores or juniors, made regions in a year when the tournament’s competition was cut in half and featured wrestlers from Region 7 and 8.

St. Augustine only featured two seniors, so most of its talent returns for the 2021-22 campaign. There were no team playoffs this season due to the COVID-19 pandemic.

“Hopefully these young guys can step up in the leadership role and bring along the guys who are a little more inexperienced,” Ward said. “Hopefully we will have a really good year next year.”

Lower Cape May Regional continually improves each season under fourth-year coach Billy Damiana. The Caper Tigers finished undefeated against Cape-Atlantic League opponents for the first time since 1998, including a 37-36 win over Absegami.

The Caper Tigers had not defeated the Braves “in decades,” Damiana said. He also guided his team to a win over Buena Regional, the first in 10 years. Lower (8-1) had to forfeit almost three or four lower weight classes each meet, but he coached the rest of his wrestlers to always get the job done.

Damiana is the Coach of the Year.

“Just to be able to go undefeated (in the CAL) in such a weird, strange year, was huge and it’s a testament to the coaching staff,” said Damiana, referencing his assistants AJ Fisher, Dennis Elia, Josh Dickenson and his brother, Cory.

“We were able to get the most out of what we had. We had great leadership out of guys like Wesley Tosto, who was one of our main seniors, ( seniors) Matt Craig and Sean Connelly, even Shane (Whitney) and (junior) Marcus (Hebron). They were great leaders this year. We had a great group of seniors.”

Lower was coming off four under-.500 seasons prior to Damiana taking over. Now, the team has finished with a winning record in three straight seasons. Under Damiana, Whitney, a transfer, was the first male to place at the state tournament since Chaz Lear in 2010. Five wrestlers advanced to the region tournament.

Two qualified for the state tournament.

Even though Lower had solid seniors, they are still a young team, especially with Hebron and fellow junior Braydon Castillo, who made states in 2020 but was injured early this season. The Lower community is getting behind the success, a couple hundred watching each livestream meet this season.

“It feels like everyone is buying into what we are selling,” Damiana said. “Hopefully we can keep the momentum going further and further.”

Was the Brewers-White Sox series a preview of the 2021 World Series?

Ryan Sininsky transitioned from midfield to attack halfway through the spring season.

On February 29th, 2020, at the Egg Harbor Township High School, Region 8 wrestling wraps up the semi-finals with finals to be held later in the afternoon. (l-r) St.Augustine’s Trey McLeer vs. Southern Regional Eddie Hummel. 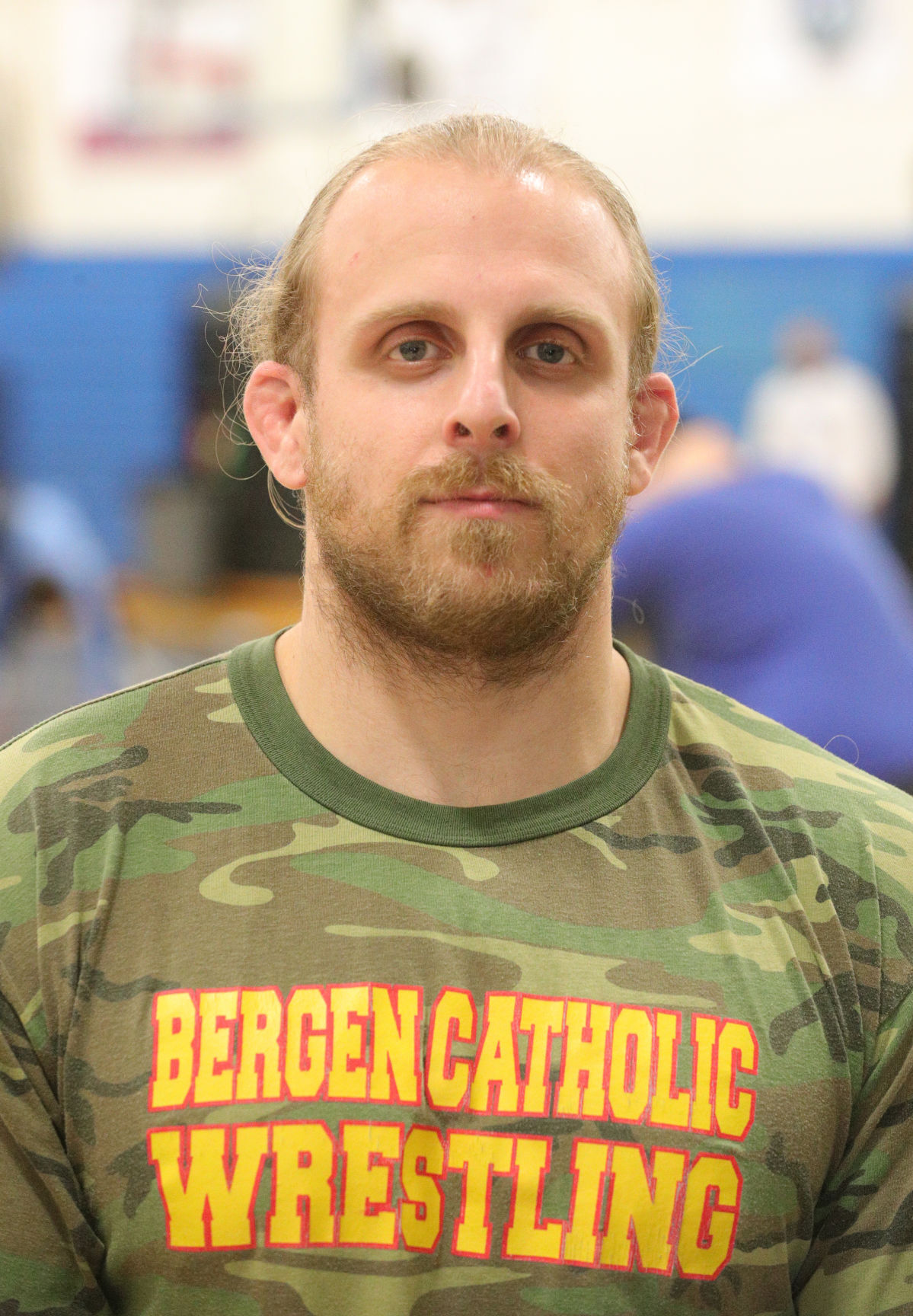