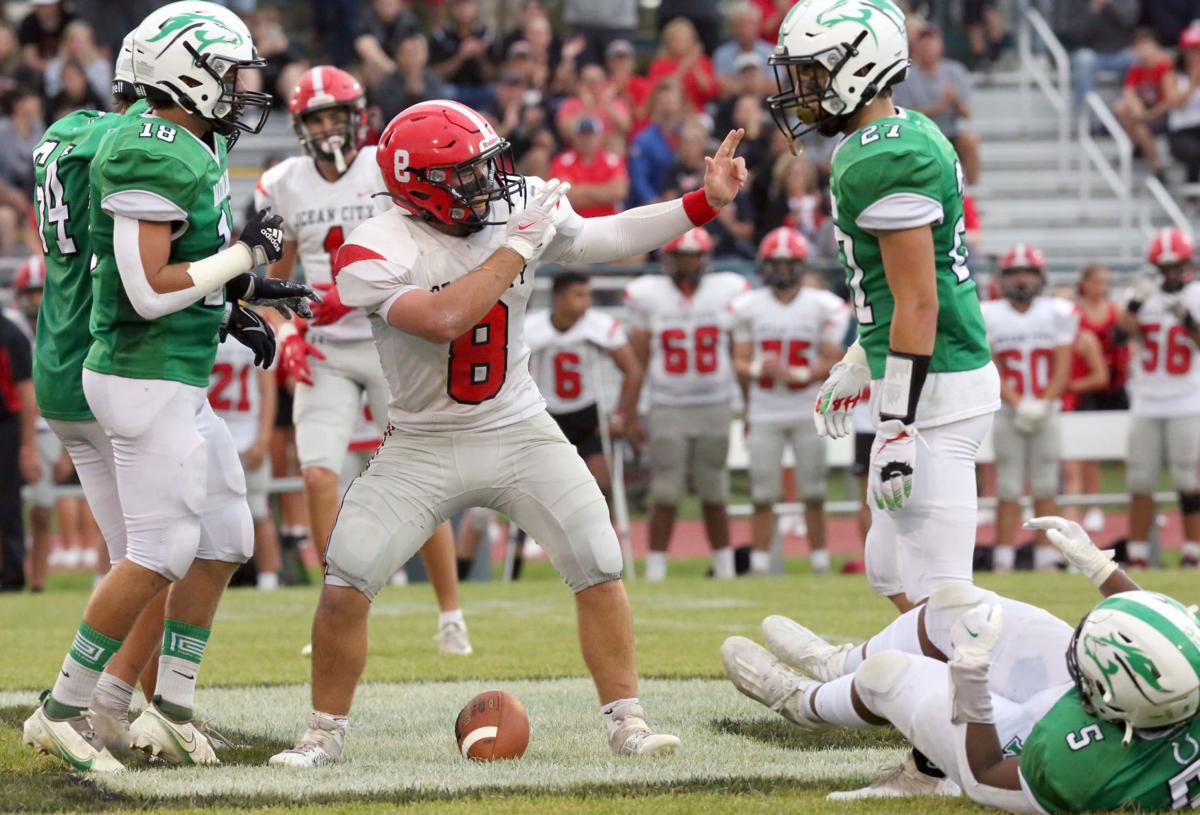 Ocean City High School’s Sean Mazzitelli celebrates after a run in the first quarter against Mainland, in Linwood on Sept. 17. 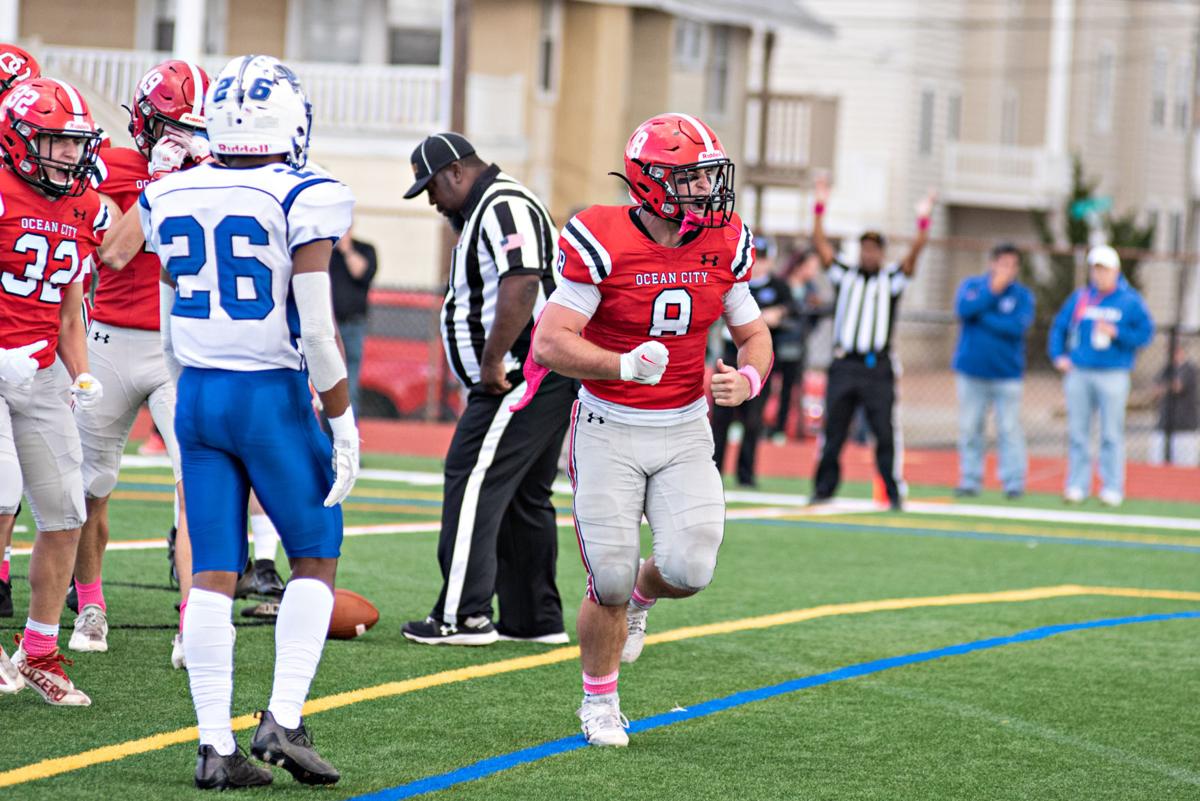 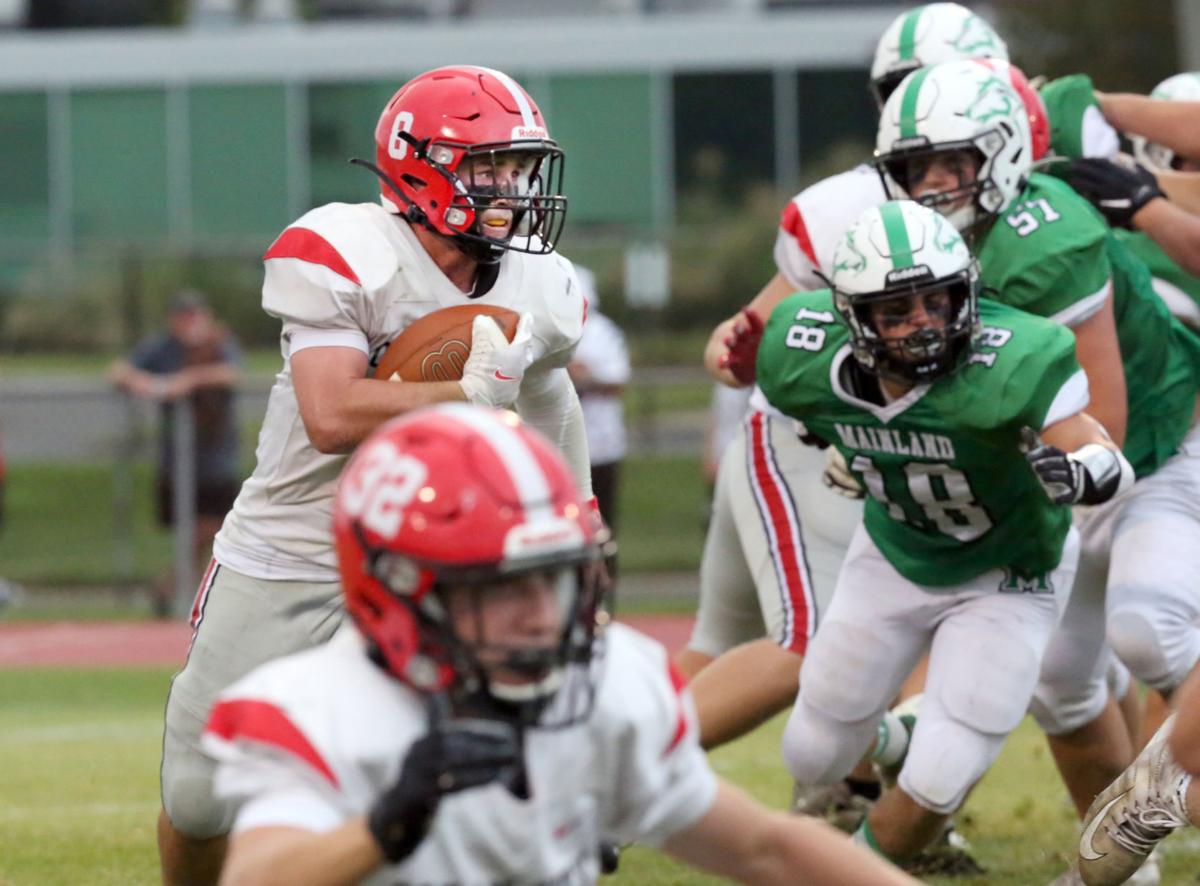 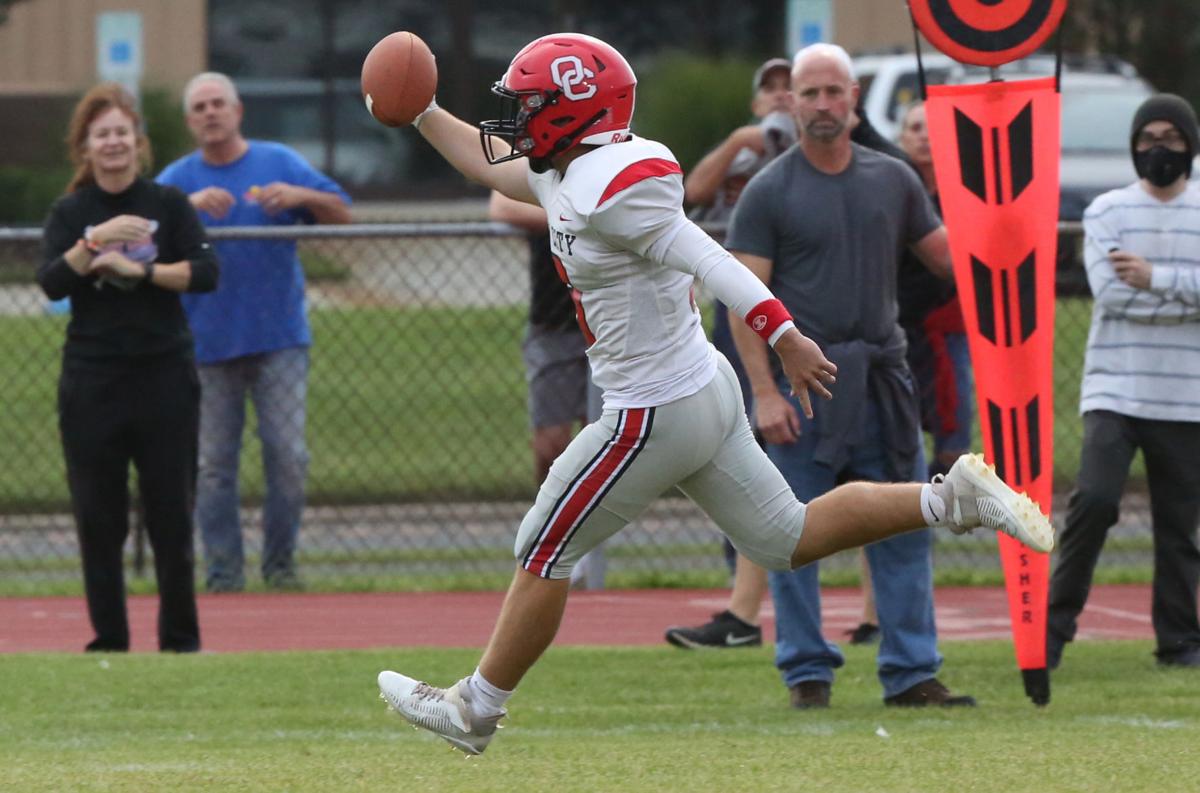 Ocean City High School’s Sean Mazzitelli runs for a touchdown in the first quarter against Mainland, in Linwood, Friday, Sept. 17, 2021 (VERNON OGRODNEK, FOR THE PRESS) 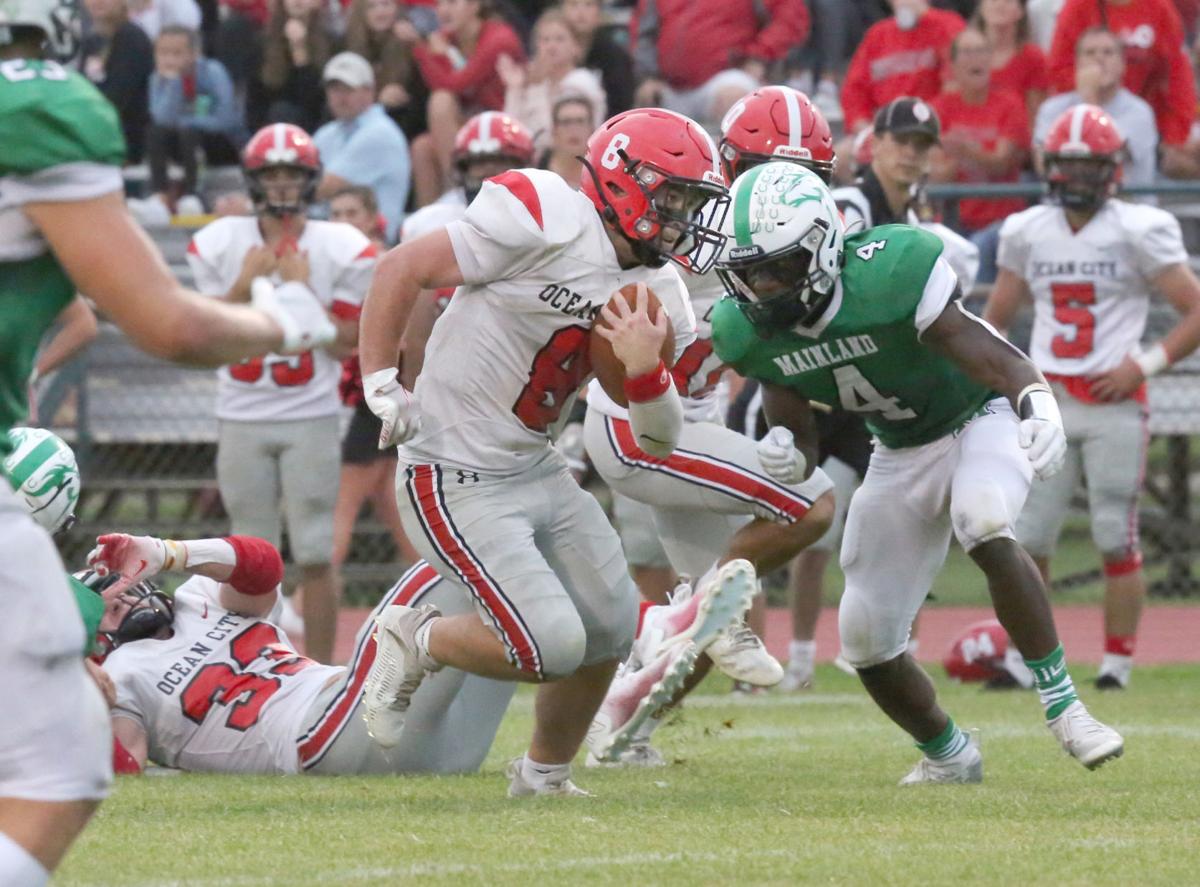 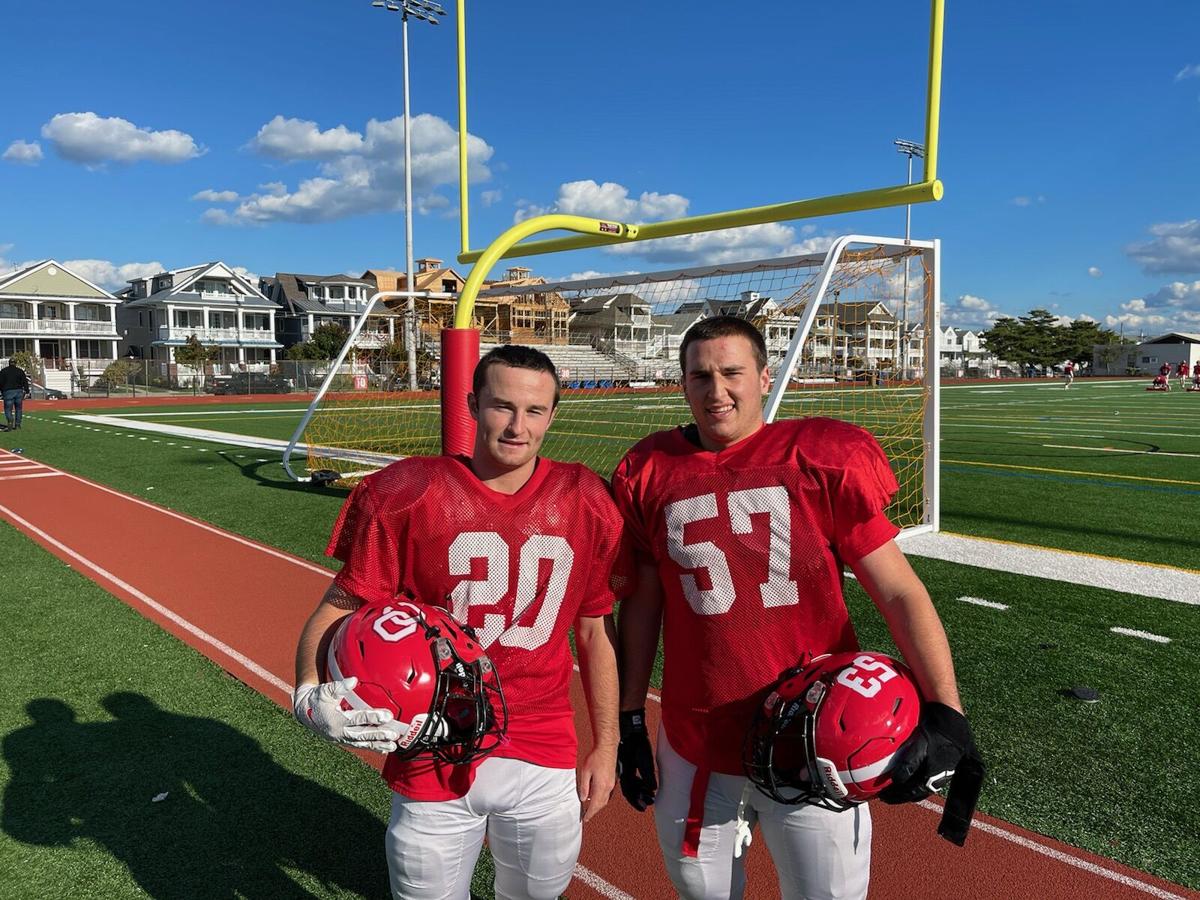 Sean is an outgoing running back and linebacker who doesn’t mind the spotlight.

Zach is the epitome of the anonymous lineman, who plugs away in the trenches and is just fine with letting his brother do the talking.

“I think we’re polar opposites personality wise,” Sean said. “We play different positions. At the same time, that’s what makes us unique. I’m proud of that.”

Together, they are a big reason why Ocean City (9-0) is the No. 2 seed in the South Jersey Group IV bracket and will host rival Mainland Regional (4-5) in a first-round playoff game 6 p.m. Friday.

“To share this experience with my brother means a lot,” Sean said. “We’re really close.”

Sean has rushed for 742 yards and made more than 40 tackles at linebacker. He became the Red Raiders’ primary running back when Jacob Wilson went out with a foot injury in the second game of the season.

In addition to the offensive line, Zach also plays linebacker where he has made more than 30 tackles and has three sacks.

“They got better every year they were in the program,” Ocean City coach Kevin Smith said. “Their teammates love them. They’re good locker room guys. If you don’t have those guys your team lacks character.”

Sean is older than Zach by about 30 minutes. The 17-year-olds grew up in Ocean City and started playing football in the third grade. No one calls the fraternal twins by their first names. Sean’s nickname is “Mazz” while Zach is “ZMazz.”

The two have taken different football journeys. The 5-foot-10, 184-pound Sean was a quarterback before moving to running back and linebacker. The 5-foot-11, 202-pound Zach was always a lineman, but what is remarkable about him is the way he’s transformed his body. He weighed 280 pounds as a sophomore.

When the pandemic hit, he didn’t think there would be a football season in the fall of 2020, so he decided to lose weight. Zach counted calories, ate a lot of chicken, rice and vegetables and worked out in his home’s garage six days per week.

When the Ocean City coaches saw Zach was 80 pounds lighter, they shifted him from tackle to guard and from the defensive line to linebacker.

“It was in his mindset,” Sean said. “He was all in. He didn’t take any days off. Every day he was tracking his calories, working out. He deserves a lot of credit. You could tell when he was at 280, he didn’t feel right.”

After every game, the twins head home to rewatch the contest with their parents, Kristen and Chris. The brothers aren’t afraid to let each other hear it about mistakes on the field. Sean got on Zach because he jumped offside in a win over Williamstown last week.

Ocean City is ranked No. 2 in The Press Elite 11. The Red Raiders game against Mainland is one of the more intriguing of this weekend’s first-round playoff contests because of the neighborhood rivalry between the schools. This will be the fifth time the two teams have met since 2019 with Ocean City winning three of those contests, including a 21-14 win the first round of the 2019 playoffs.

“It’s a lot of fun playing Mainland,” Zach said. “It’s always super loud. The whole city is there. Those games are definitely the most fun.”

As successful as the Red Raiders have been, the end of the season is in sight. Sean and Zach probably won’t play football in college. Their days of playing on the same team are almost over.

For now, the twins are doing their best not to think about that. They want to keep the season going as long as possible.

“We’re not satisfied,” Sean said. “We want that championship.”

Game of the Week

Did you know:  Ocean City is the No. 2 seed, while Mainland is seeded seventh. This is the fifth time these rivals have met in the past two years. Ocean City has won three of the four previous contests, including a 34-6 win over Mainland on Sept. 17. Mainland leads the series 28-21.

Ocean City High School’s Sean Mazzitelli celebrates after a run in the first quarter against Mainland, in Linwood on Sept. 17.

Ocean City High School’s Sean Mazzitelli runs for a touchdown in the first quarter against Mainland, in Linwood, Friday, Sept. 17, 2021 (VERNON OGRODNEK, FOR THE PRESS)