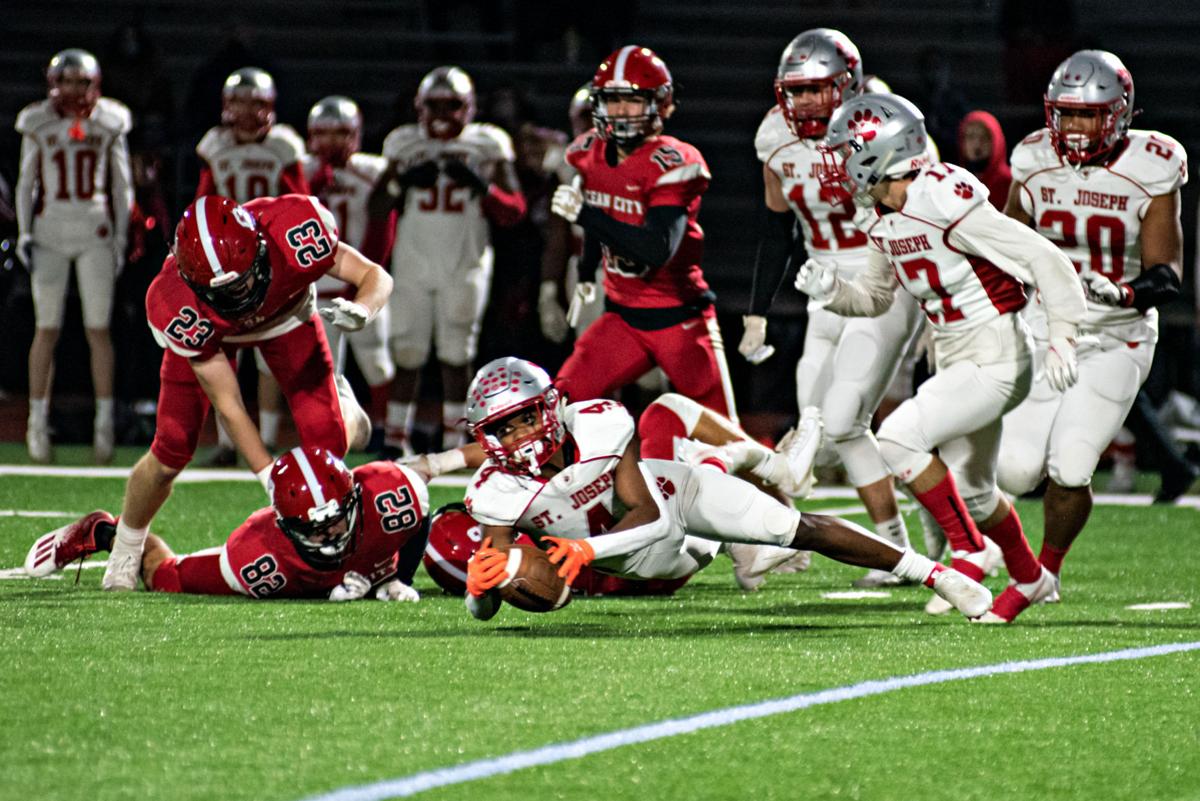 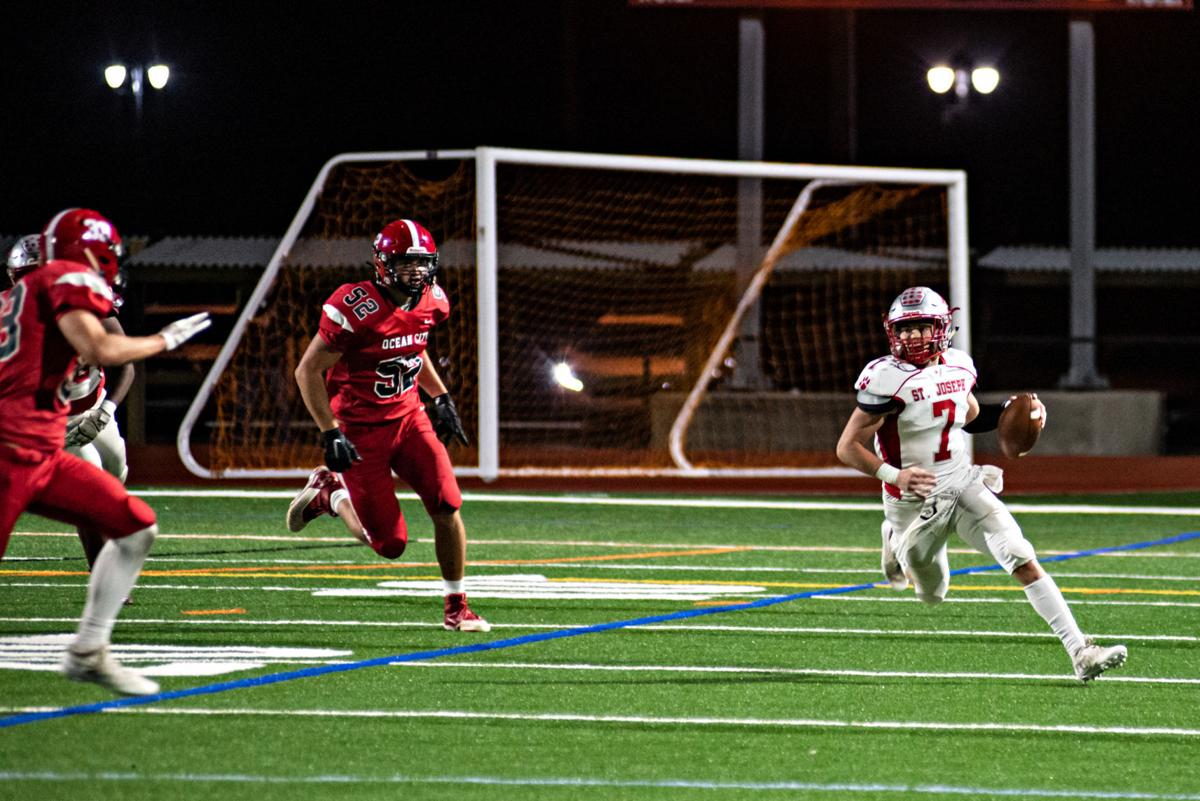 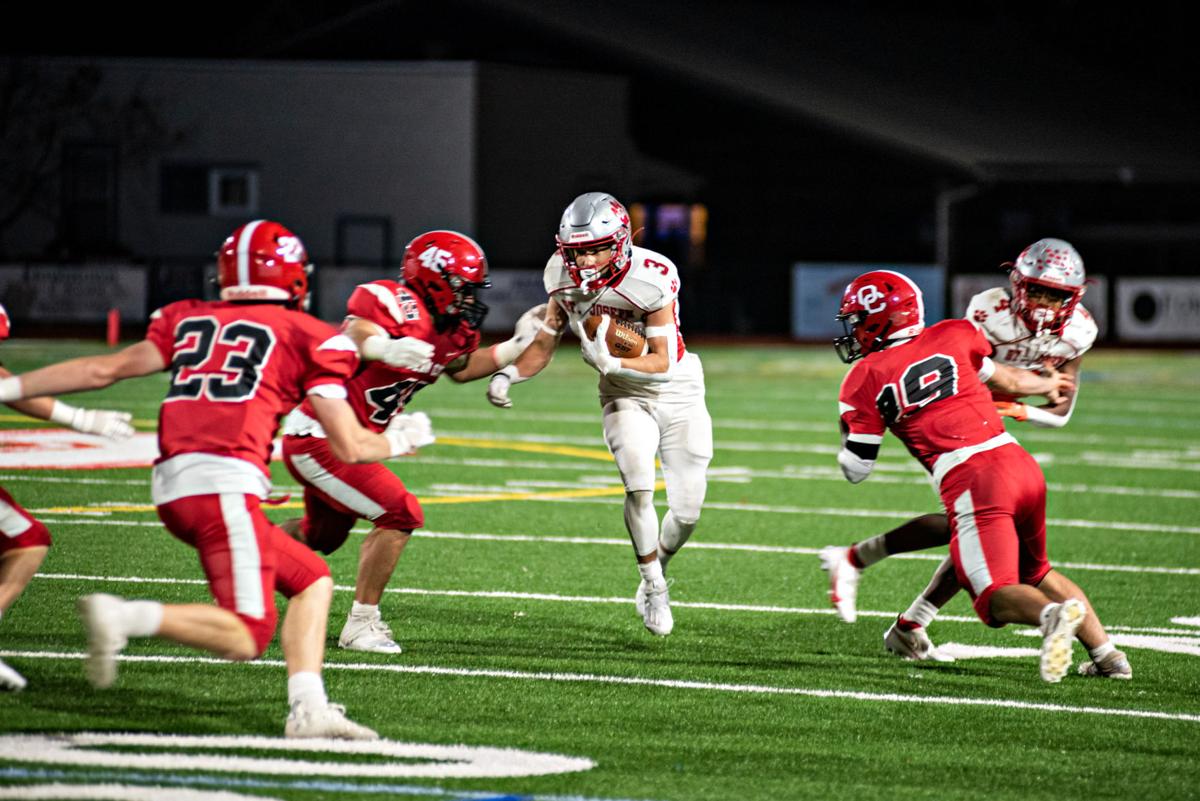 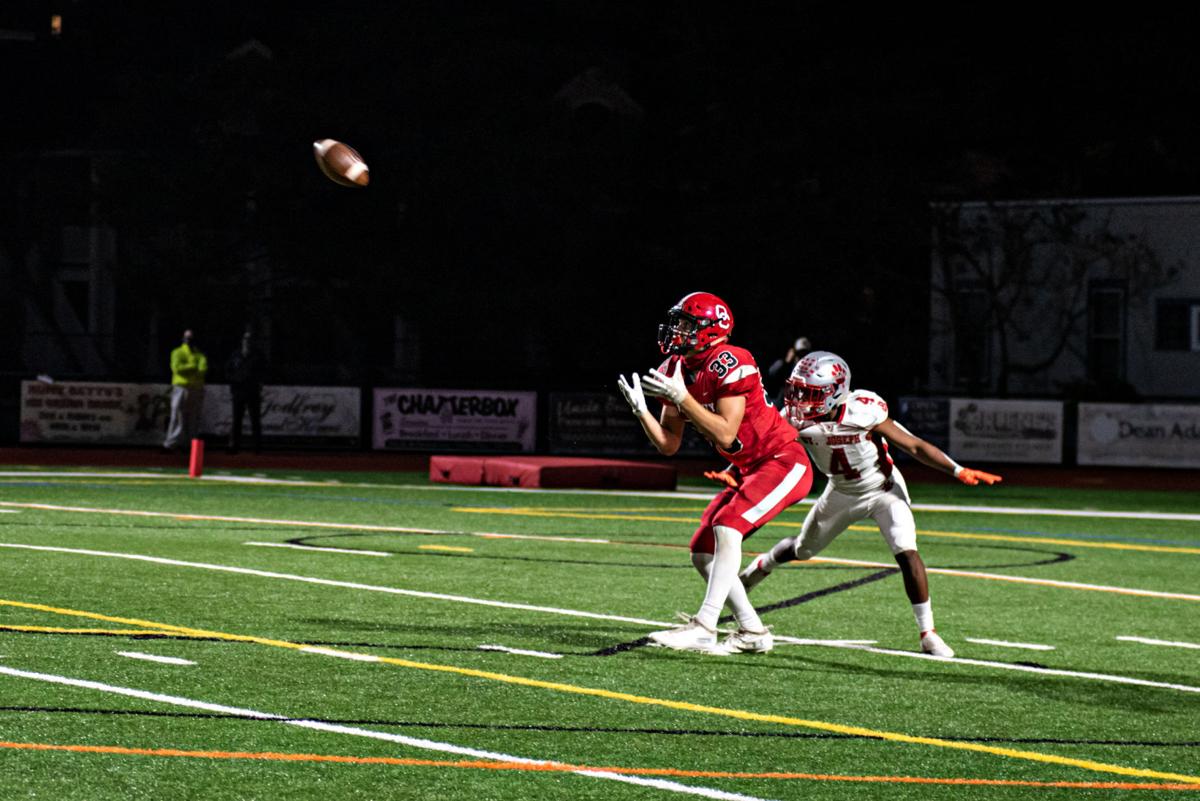 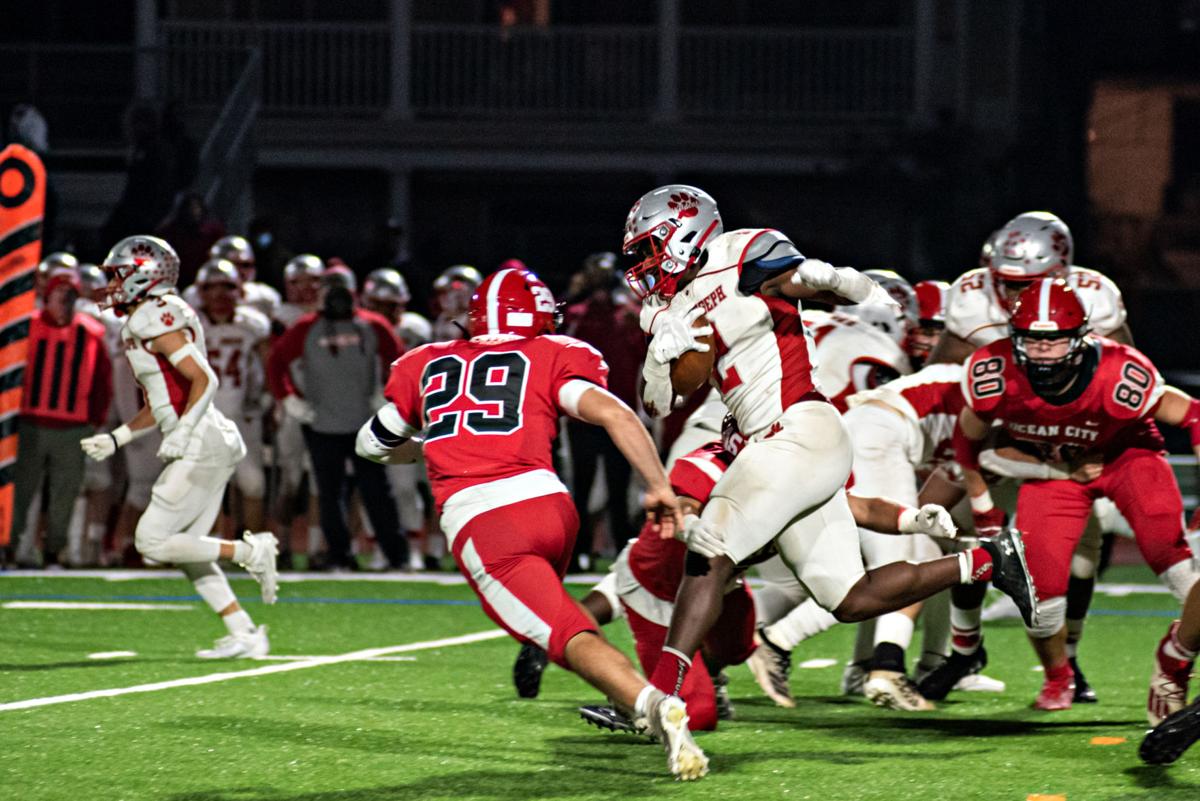 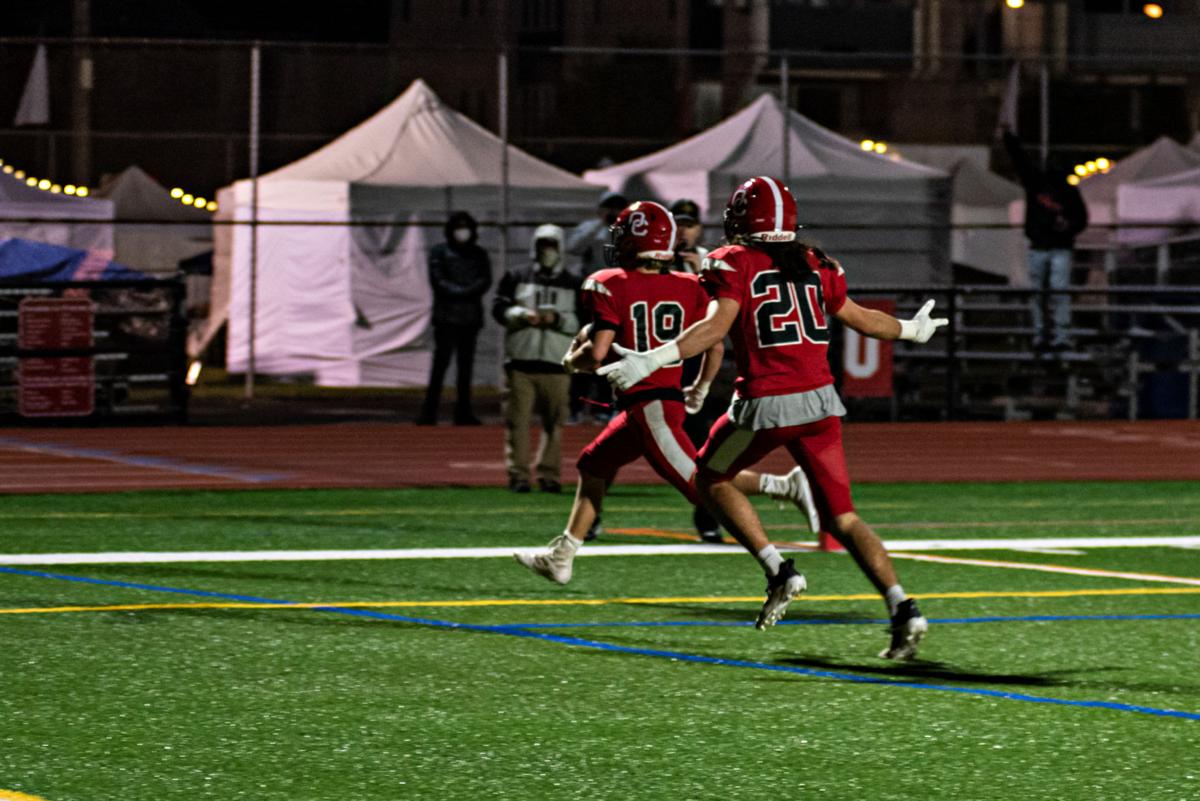 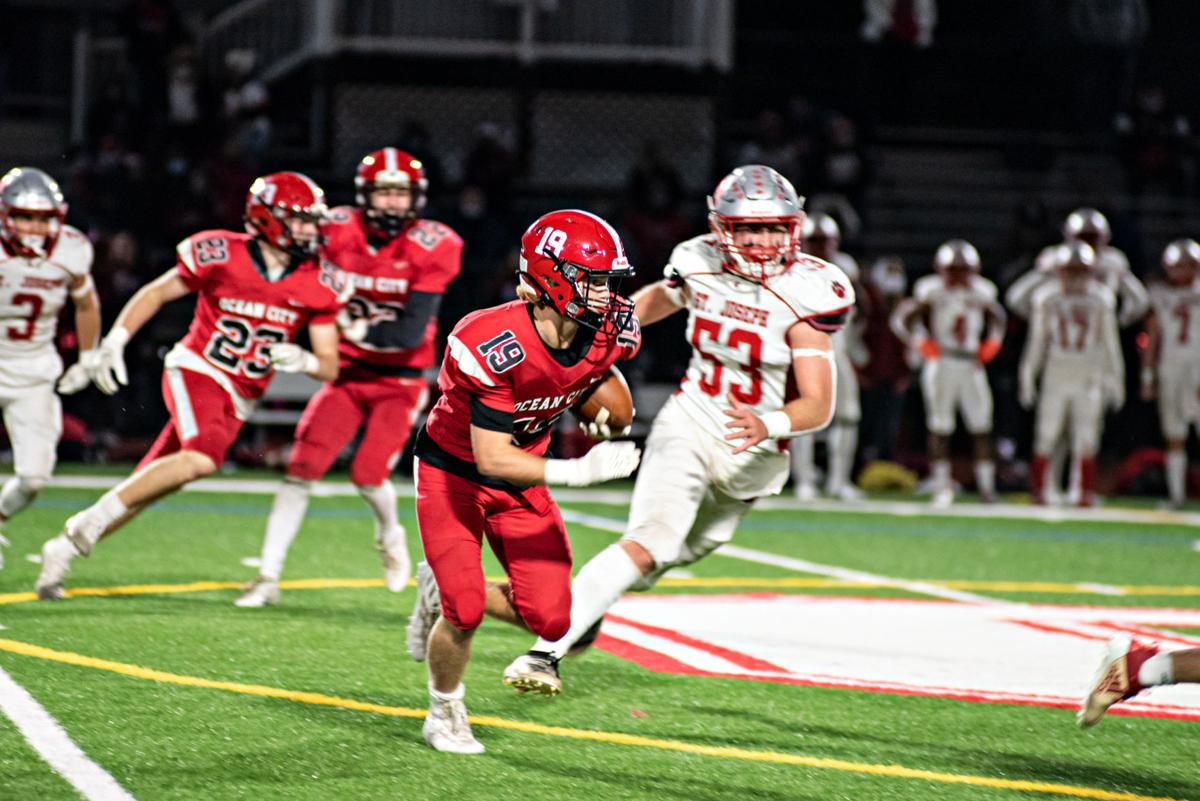 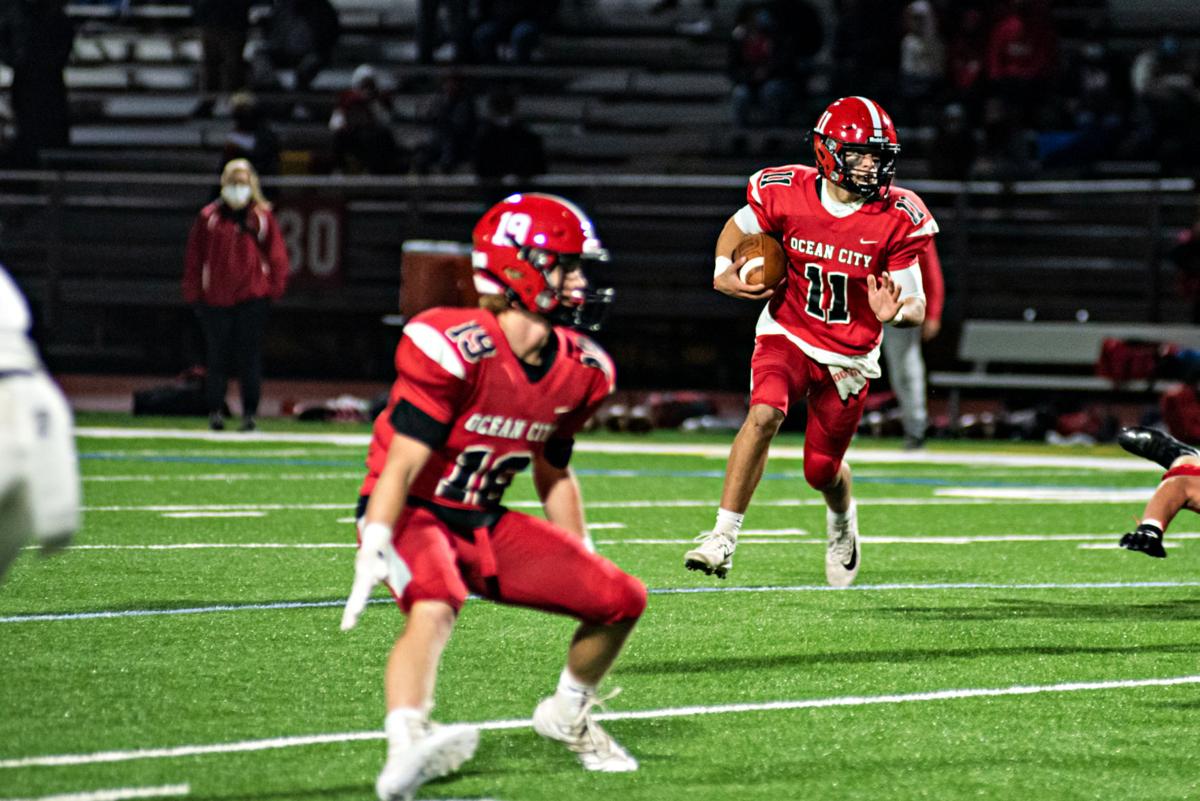 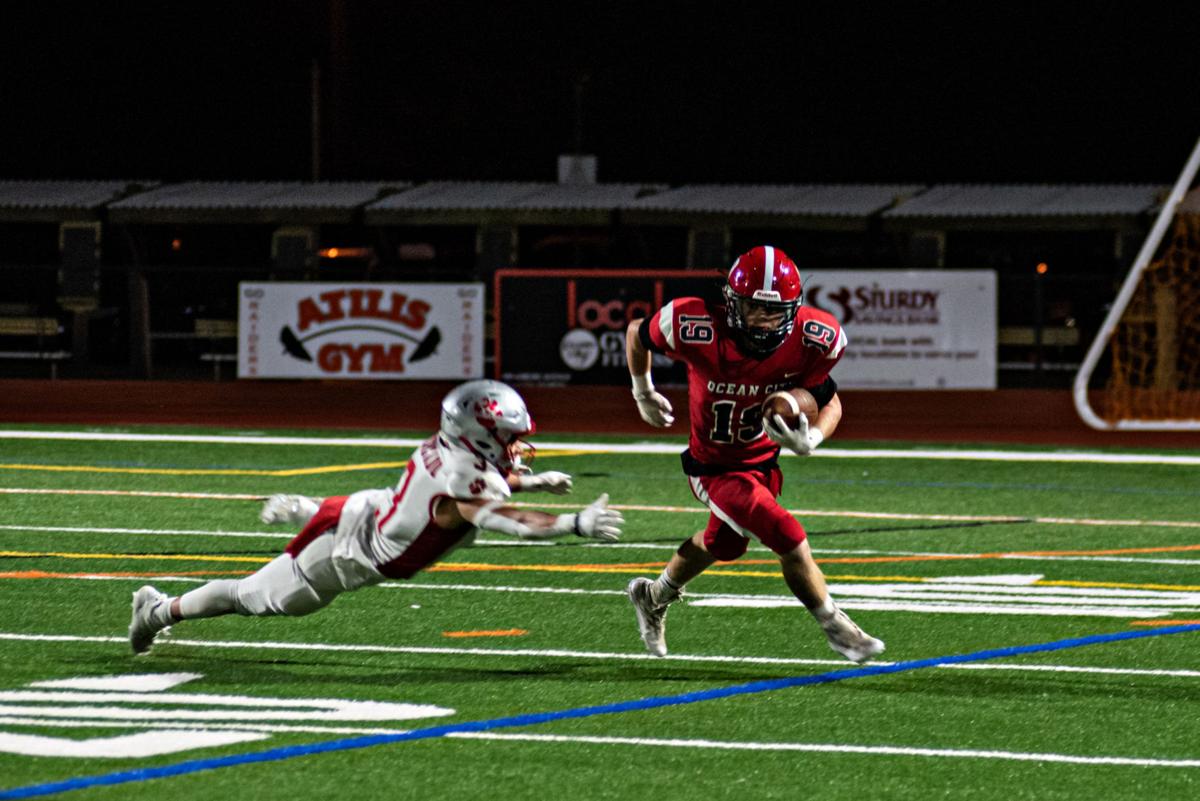 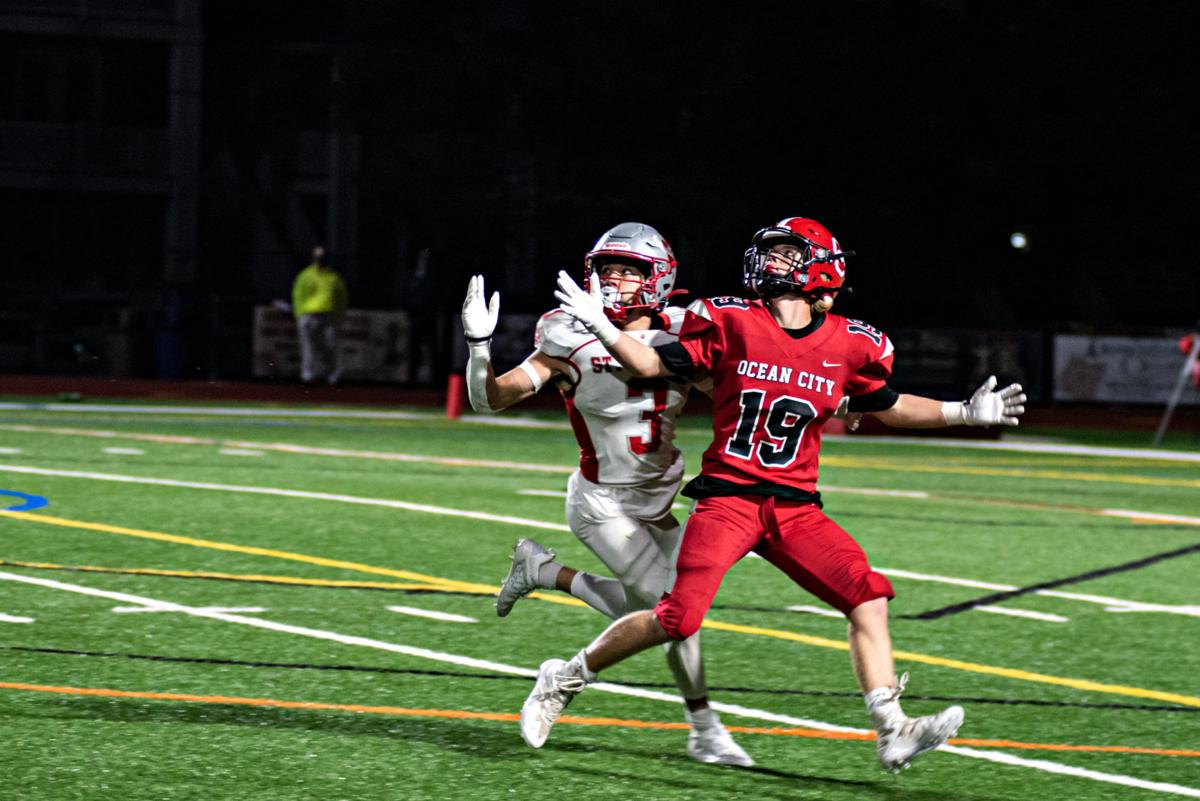 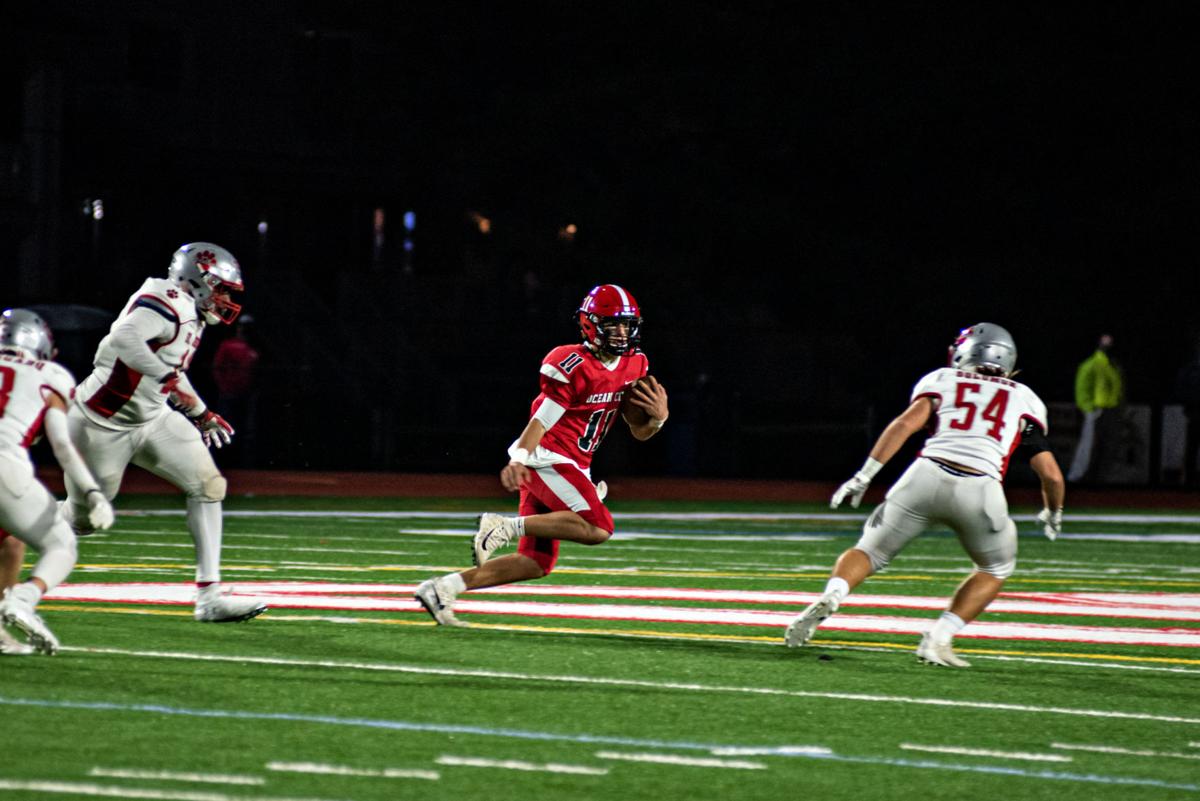 OCEAN CITY — The Ocean City High School football players admitted they had some questions about how they would measure up against St. Joseph Academy on Friday night.

Those doubts got a little bit more real after St. Joe scored on its first possession to take a touchdown lead.

“We thought maybe we can’t compete with them,” Ocean City senior defensive lineman Mike Rhodes said. “We were like, ‘Oh, they’re pretty big.’ But then we’re like, ‘Wait a minute, we’re Ocean City. When have we backed down from a challenge?’ We said to each other, ‘No fear.’ We worked all four years for this. Why not put it all on the line?”

Ocean City quarterback Joe Repetti ran for 87 yards and threw a TD pass as the Red Raiders beat St. Joe 12-7 in a West Jersey Football League Pod B semifinal. Ocean City (6-0) is scheduled to host Camden (3-1) for the pod championship next weekend.

Senior defensive back Brady Rauner intercepted a St. Joe pass at the Ocean City 2-yard line with 19 seconds left in the game to preserve the win.

“This means everything to us,” Repetti said. “This is the best senior year that I could ask for. We’re just going to try and win as many football games as we can and be the best team we can be.”

In this COVID-19-impacted season where there are no traditional playoffs, the WJFL’s top teams were organized into postseason pods.

Fridays matchup on a clear, cool night in Ocean City was one of the weekend’s most notable games.

Ocean City, ranked No. 3 in The Press Elite 11, had won its previous five games by an average margin of 42.2 points. Despite their lopsided wins, the Red Raiders were sometimes overlooked as three of their victories have come against teams with two wins or less.

St. Joe, ranked No. 6 in the Elite 11, shaped up to easily be Ocean City’s sternest test this season. The Wildcats are a perennial power and had won five straight after a season-opening loss to Holy Spirit.

Ocean City could not muster a first down on its first two possessions.

But the Wildcats would not score again. St. Joe was hurt by penalties, including a third-quarter holding call that negated a 40-yard TD pass that would have given the Wildcats at least a three-point lead.

On offense, Ocean City relied mostly on Repetti’s running. Jake Schneider had good punt returns to set up two Ocean City scores. The Red Raiders took a 10-7 lead they never relinquished when Repetti threw a 5-yard TD pass to Schneider with 2 minutes, 34 seconds left in the first half.

Still, the game came down to the final minute. The Wildcats drove from their own 5 to the Ocean City 42, but Rauner clinched the victory with his interception. There was an open St. Joe receiver in the end zone behind him.

“I saw (the quarterback roll out) with all the defensive linemen chasing him,” Rauner said. “I knew he was going to have to get rid of the ball. I knew he was going to my guy. It was a big throw for him to make, and I just knew it wasn’t going to go that far. I undercut it a little bit. I jumped up, picked it. That’s all she wrote.”

The Red Raiders have more to play for but with Friday’s win, they can no longer be overlooked or underestimated.

“This is an absolute statement,” Rhodes said. “Not only for this team, but the school, this city, this program, everything about it.”

OCEAN CITY — In this year of COVID-19, nothing is surprising, not even playing half of a football game.

Holy Spirit runs away from A.C. to complete perfect season

ABSECON — Devin Lee waited his turn to be the starting running back for the Holy Spirit High School football team.

Sometimes Kassidy Wentzell forgets that she no longer plays on a field hockey team.

BURLINGTON TOWNSHIP — With tears in his eyes and attempting to hold back his emotions, Ahmad Ross stood with reporters after embracing teammat…

Getting to end of fall high school season is a huge accomplishment: Must Win

Chuck Donohue is in his 50th season as a high school football coach.

The high school football season ends Saturday with a traditional rivalry and a matchup of two of South Jersey’s top teams.

CAPE MAY COURT HOUSE — David Giulian prides himself on being the first player down the football field on kickoff coverage.