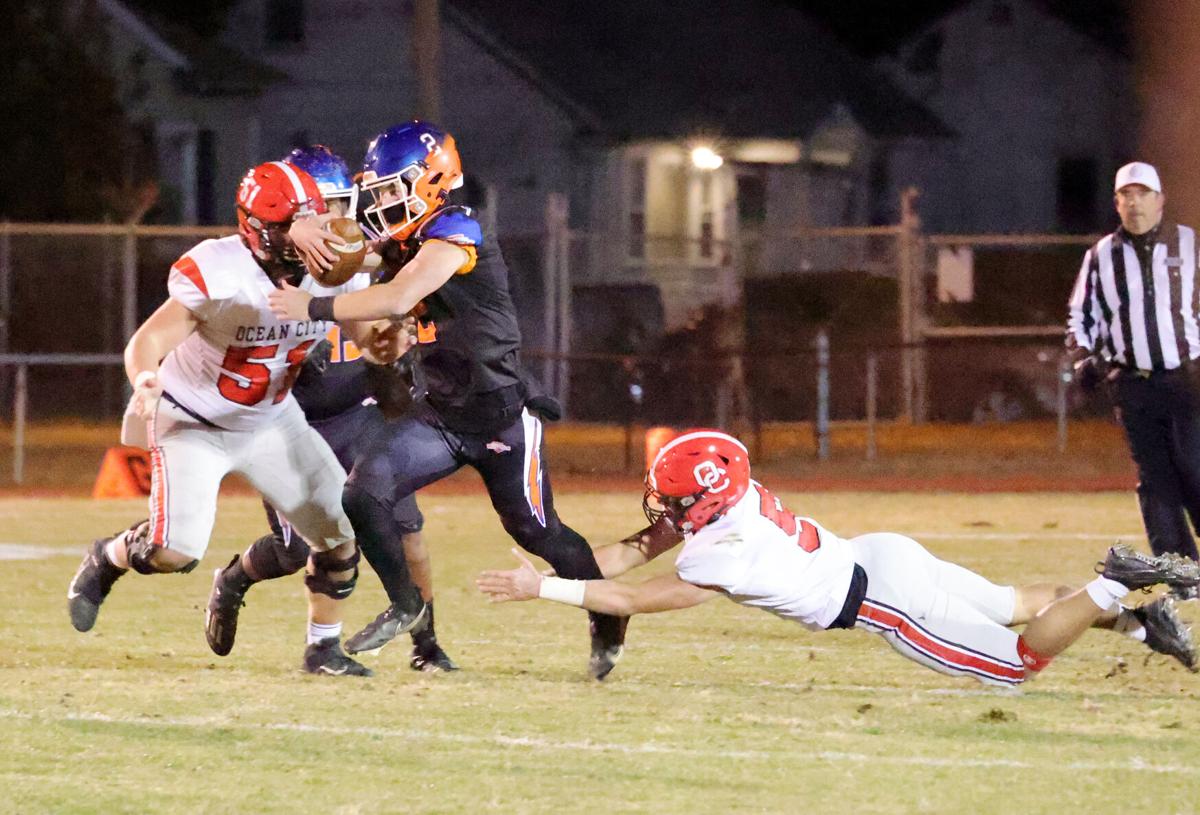 Millville quarterback Nate Robbins, center, runs past Ocean City's CJ Conti (51) and Sam Williams (5) on the way to a 14-yard run and a first down during the first quarter Friday at Wheaton Field. 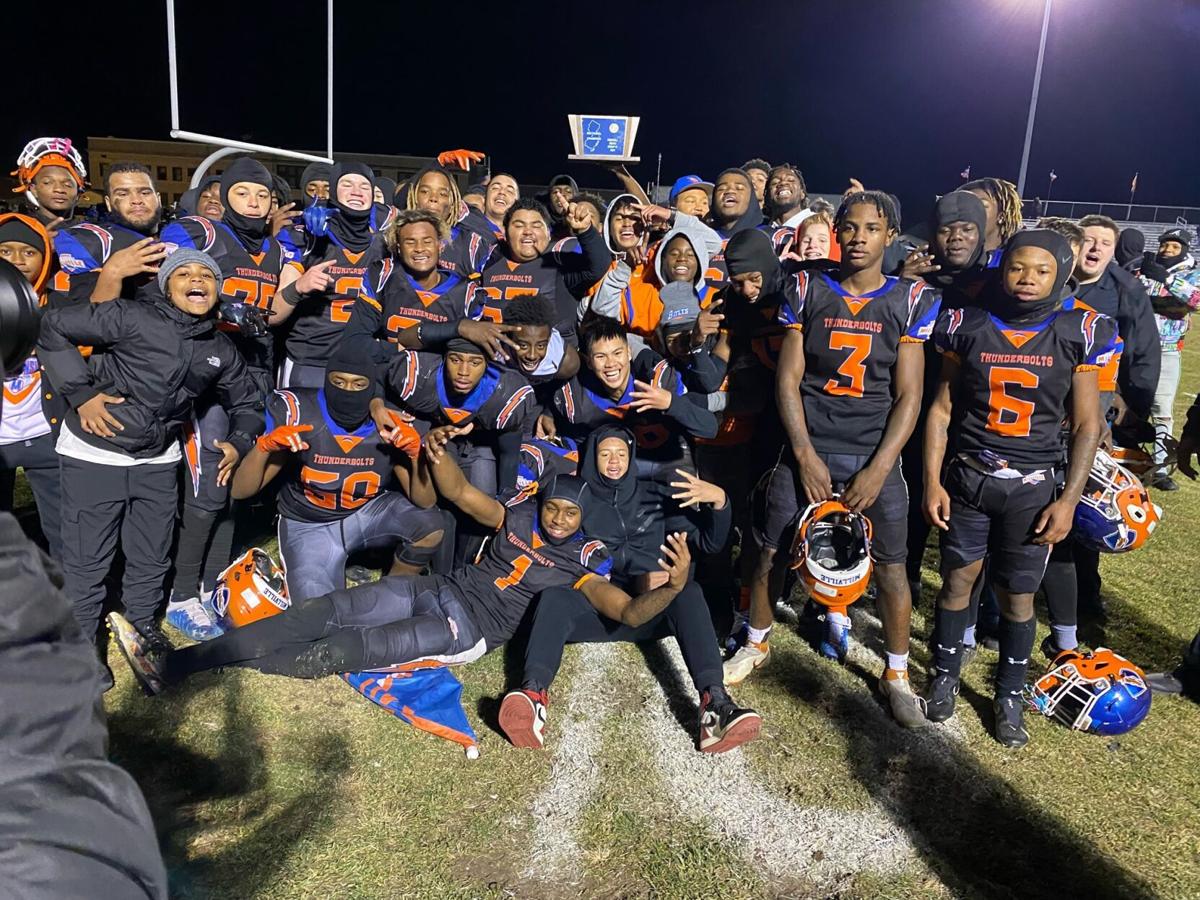 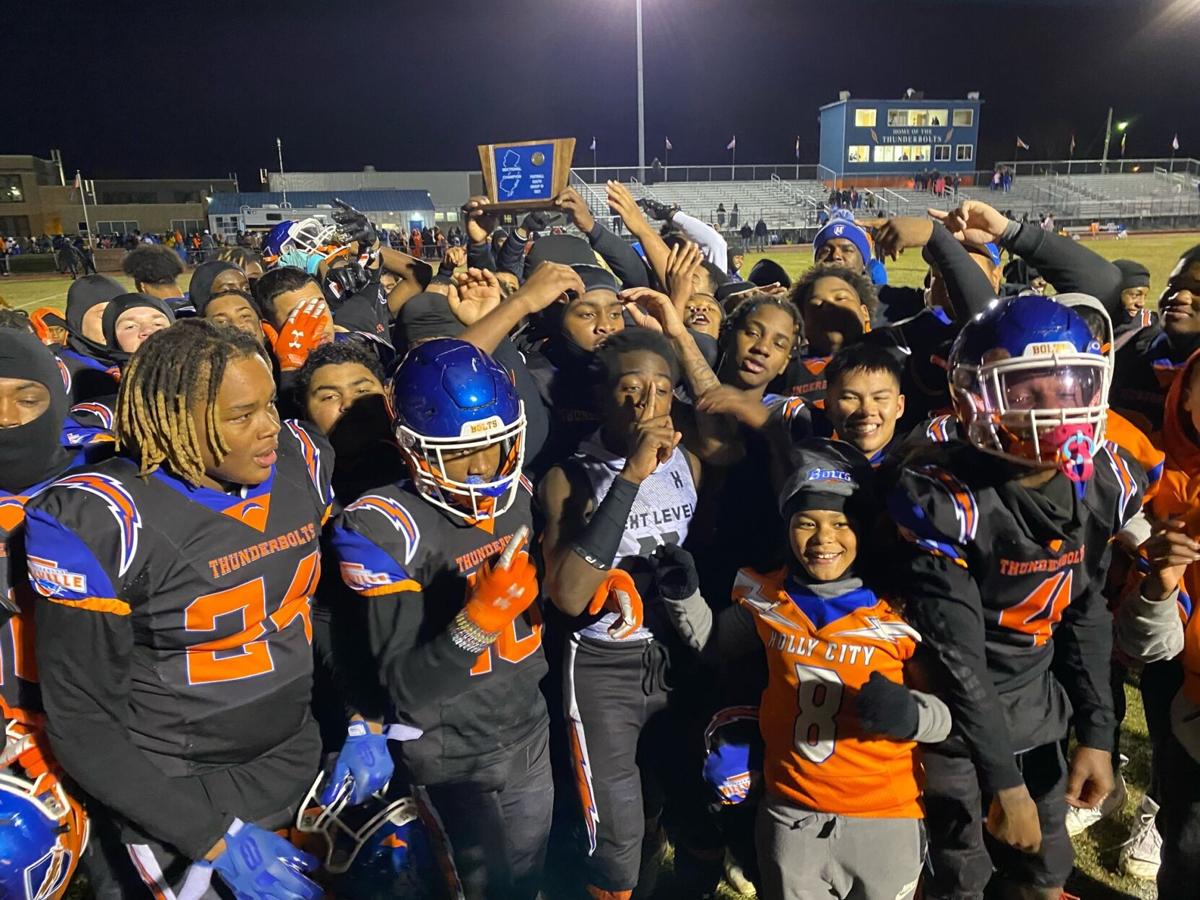 MILLVILLE — When Nate Robbins was in eighth grade, his midget football team went 1-9.

Robbins and his fellow seniors had never won a championship until Friday.

It was several years of hard work coming to fruition for the Class of 2021.

“We’ve been wanting this our whole four years (in high school),” said Robbins, 17. “Coming out here and getting it on our home field was something really special.”

Robbins was just as steady as he had been all season for the Thunderbolts. He completed 12 of 20 passes for 189 yards and three touchdown passes. He threw an interception that came on a nice play from an Ocean City defender. He also converted three long third downs for the Thunderbolts, who improved to 10-1.

“He’s the heart and soul of this offense,” Millville coach Dennis Thomas said. “When he’s on the field at quarterback, his mindset is very similar to mine, and I wouldn’t trade him for the world.”

Thomas said the Thunderbolts offense goes through Robbins, calling the three-year starting QB another coach on the field.

“If I call the wrong play, like the wrong look, he’ll go, ‘no, Coach, it’s this look,’ and he’ll correct it. He knows (the offense) inside and out,” Thomas added.

There were several big plays made by Robbins on Friday night.

He threw two touchdown passes to freshman Lotzeir Brooks from 31 and 42 yards out, and a 50-yarder to a wide open senior receiver Calem Bowman.

But, it was what Robbins was able to do to sustain Millville’s drives Friday that was key.

The Thunderbolts faced a third-down and 9 about midway through the first quarter. Robbins dropped back to pass and immediately had an Ocean City defender in his face. He shook off the would-be sack, broke free from another defender and scrambled 14 yards for the first down.

“I’m just dropping back, and I see everybody on Ocean City dropping back in coverage,” Robbins said. “They had our routes all locked up, and then I see pressure in my face, so I stepped to the right and I see a hole, so I get low and break a tackle and make sure I get to the first down.”

Millville was faced with a pair of long third downs again in the second quarter.

Facing a third-and-6, Robbins drew up a swing pass to the right, finding junior wide receiver Thomas Smith on a 15-yard pickup for the first down. A few plays later, facing a third-and-11, he found senior receiver Ti-yon Cephas, who made a leaping grab between two defenders, over the middle for a 17-yard gain.

Robbins called this season the best of his football life. He has thrown for a single-season school record 2,291 yards to go with 26 TDs. Winning a sectional title was the true team goal, and finishing the season with wins against rival Vineland on Thanksgiving and another in a bowl game the following week would be icing on the cake.

Robbins said he is considering attending Rutgers University in the fall to study sports medicine. He may consider trying to walk onto the football team.

All that he accomplished this year, Robbins couldn’t have done it without his teammates, he said. It’s all about the OBG mentality — orange and blue gang — he said.

“They all put in 100% today, and that showed,” Robbins said. “They all have love for everybody on this team and just putting that all together and put up points.”

Tickets for the 150th Vineland vs. Millville game will be sold at the gate

MILLVILLE — Unlike the South Jersey Group IV Championship game, tickets for the Thanksgiving game between Millville and Vineland high schools …

BUENA VISTA TOWNSHIP — The St. Augustine Prep football team had not suffered a loss since Aug. 27.

What does "OBG" mean to Millville? Just about everything: Must Win

The chant is heard before and after every Millville High School football game.

Tickets for this weekend's football sectional finals, which include Cedar Creek, Millville and Ocean City, must be purchased online.

What seemed inevitable for most of the high school football season will happen Friday night.

TRENTON — Fans planning to watch Millville and Cedar Creek in their Regional Championship games next week must buy tickets online.

Millville quarterback Nate Robbins, center, runs past Ocean City's CJ Conti (51) and Sam Williams (5) on the way to a 14-yard run and a first down during the first quarter Friday at Wheaton Field.