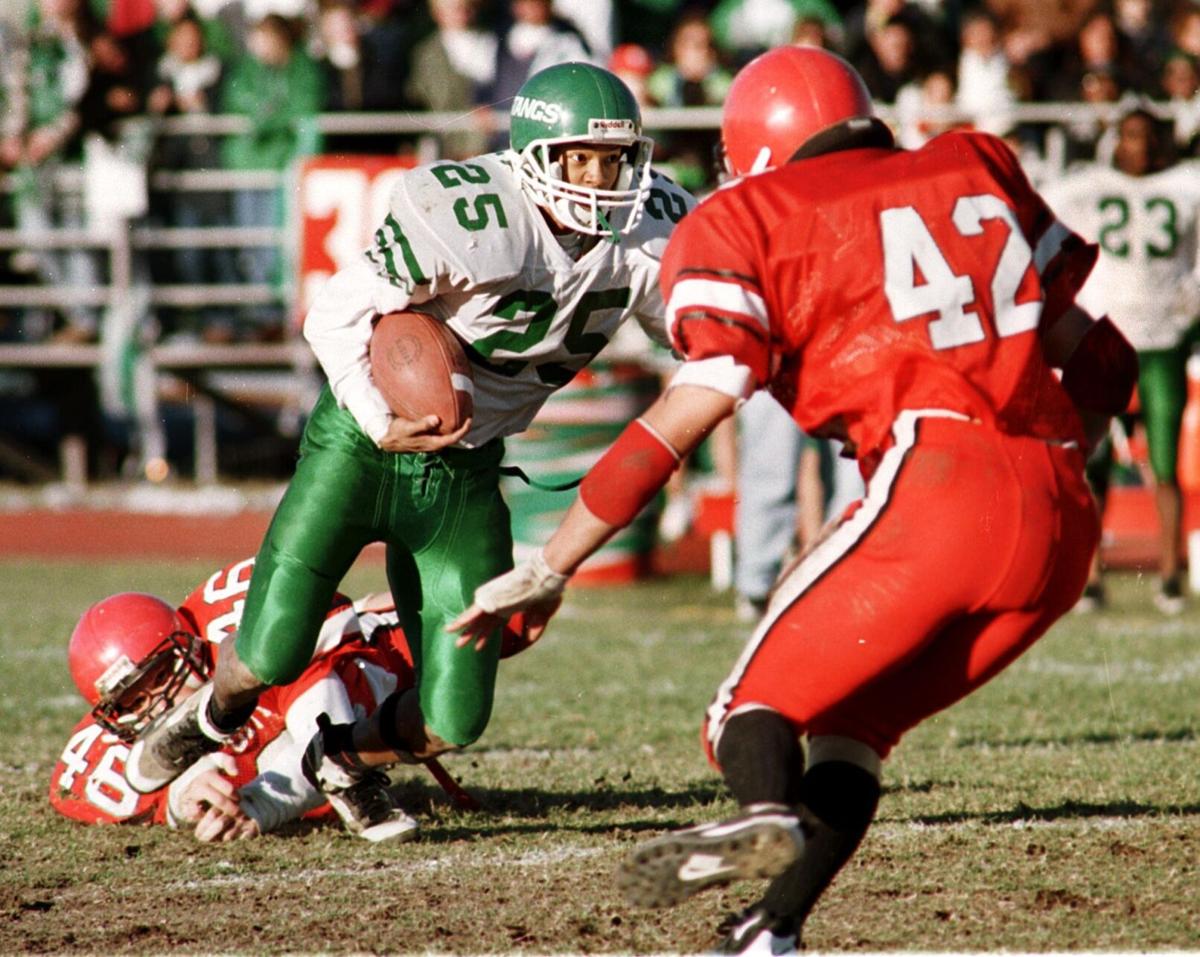 Mainland’s John Stone carries the football in a game against Ocean City on Dec. 2, 1995. 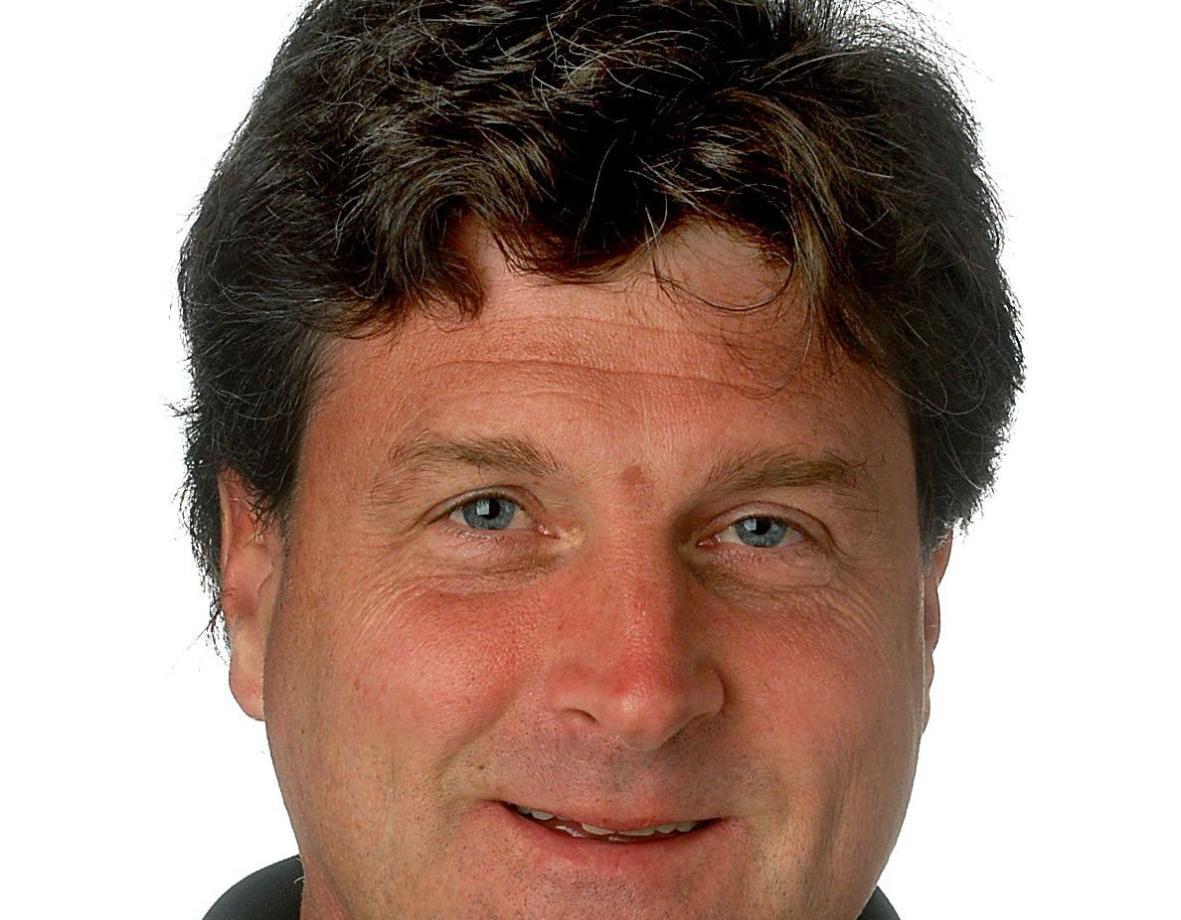 What happened on a windy night 25 years ago goes a long way toward explaining why the rivalry is one of the region’s best. That night, Ocean City and Mainland Regional played one of the biggest and most anticipated football games in South Jersey scholastic history.

To understand what happened in 1996 on the Mainland football field in Linwood, one has to go back to 1995.

That set up the 1996 matchup. Ocean City took a 7-0 record into the Nov. 8 game. The Red Raiders averaged 47 points in those seven victories.

Meanwhile, Mainland entered the game 5-1. The Mustangs relied on running back John Stone, who later played with the Oakland Raiders. Marcus Perry led the defense. Brad Eissler was one of South Jersey’s top defensive backs.

Mainland and Ocean City athletes — as they do today — often saw each other off the field.

“Those bragging rights are important,” Perry said this week. “We love to compete on both sides. To have that much talent so close to each other is pretty special.”

Most expected plenty of points to be scored, but offense was tough to come by.

The Red Raiders moved into Mainland territory on five straight possessions, but the Mustangs forced a fumble and stopped Ocean City on downs the other four occasions.

Sinclair rushed for 138 yards, but Mainland defensive back Carnell Davis held Lipford to a single catch for 19 yards.

“They ran Sinclair away from me the whole game,” Perry said.

The Mainland offense didn’t fair much better than Ocean City. The Red Raiders held Stone to 40 yards on 11 carries.

Jason Feinberg gave Mainland a 3-0 lead with a 23-yard field goal in the second quarter.

The Ocean City offense had one flash of brilliance in the second quarter. The Red Raiders drove 63 yards in four plays for their only score. Sinclair started the drive with a 46-yard run. Matt LeFever finished it with a 3-yard sneak into the end zone to make it 6-3.

That’s the way it stayed until late in the game.

The Mustangs’ last chance came with one minute, 54 seconds left when they got the ball at their own 48. One play later, Ocean City defensive back Ray Rogers made a diving interception of a downfield pass to give the ball back to Ocean City.

The drama was not done, however. On fourth down in the final seconds, Ocean City had to punt. Rather than kick into the wind, Matt Lefever ran around in the end zone and then took a safety as the clock hit zero. Ocean City won 6-5.

“It was a crazy game,” Sinclair said. “In four years at Ocean City, we had never taken a safety. I don’t think we even practiced that.”

Ocean City would go on to win the South Jersey Group IV title and be remembered as one of the best teams in South Jersey history.

“That team was one of the tops in the country,” Sinclair said.

Why is it worth remembering what happened 25 years ago?

Mainland and Ocean City were and always will be natural rivals. After all, the school’s communities border each other. The two football teams meet again 6 p.m. Friday.

What happened on the football field in the 1990s escalated the rivalry for every athlete and coach who played in a Mainland-Ocean City game since then no matter what the sport or setting.

Michael McGarry’s Must Win column appears every Friday in The Press.

St. Joseph Academy looks toward the future as they host Washington Township

The St. Joseph Academy football team will return to its past this weekend at a time when the school is optimistic about its future.

The word Paul Rodio keeps coming back to is “lucky.”

LINWOOD — The Mainland Regional High School field hockey team was relentless on offense Wednesday, maintaining possession for most of the game…

The Our Lady of Mercy Academy soccer team improved to 6-5-1 on the season with a 2-0 win over Wildwood Catholic Academy on Tuesday.

For Cedar Creek's JoJo Bermudez, 'it's score or nothing'

As a youngster growing up in Egg Harbor City, JoJo Bermudez and his buddies would head to a nearby grass pit to play rumble-fumble.

ATLANTIC CITY — Demetrius Moody finished with a blocked punt and an interception Friday, both plays resulting in scores that gave the Atlantic…

Mainland’s John Stone carries the football in a game against Ocean City on Dec. 2, 1995.