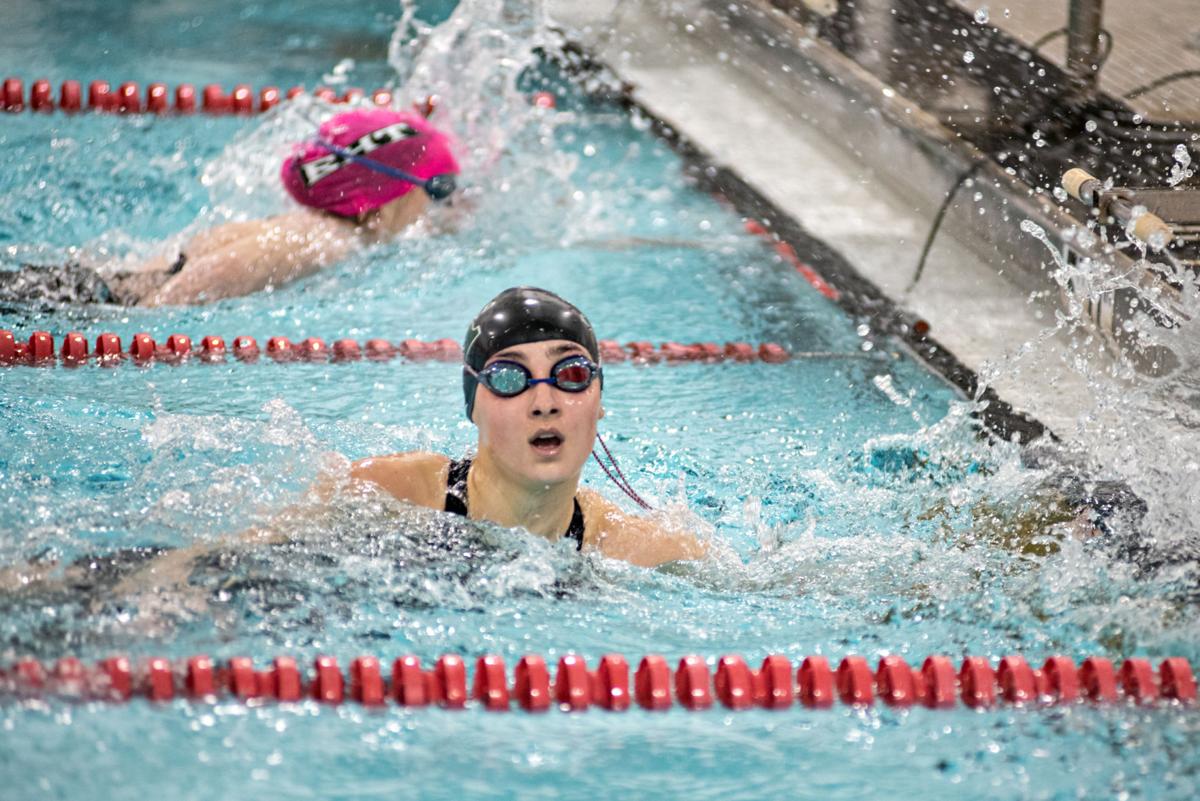 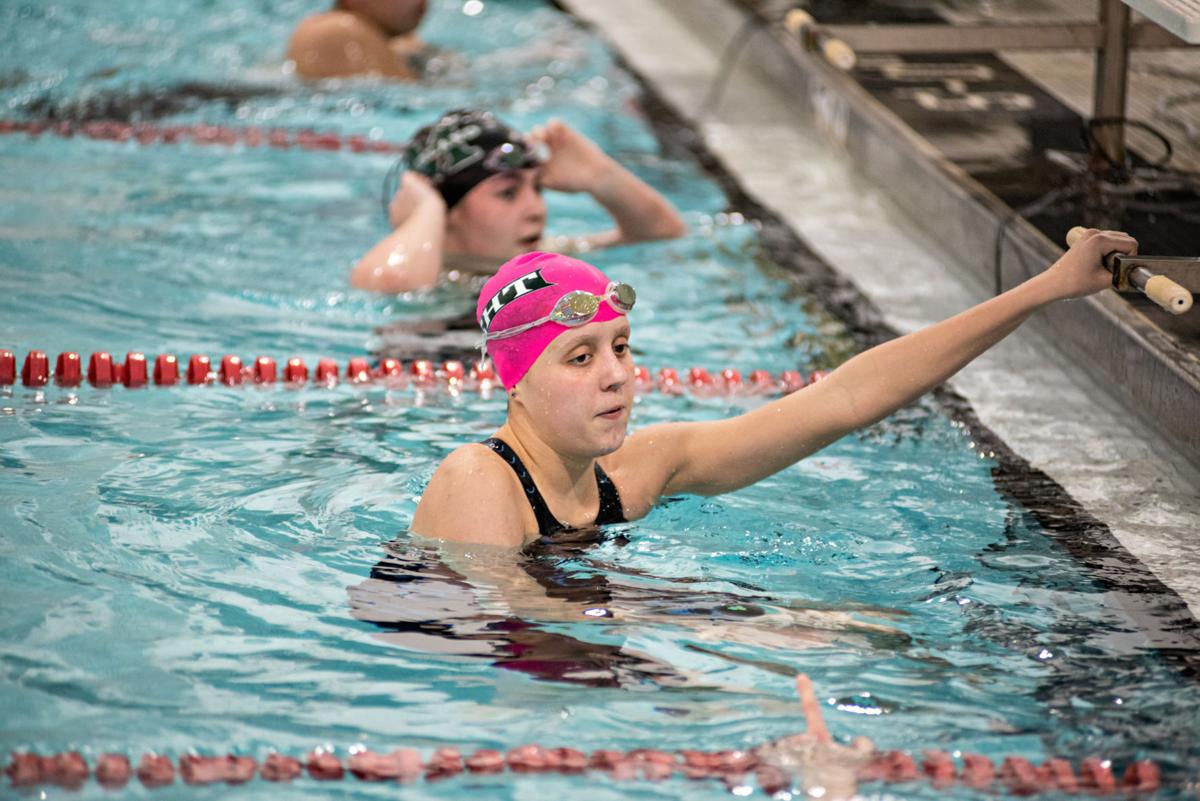 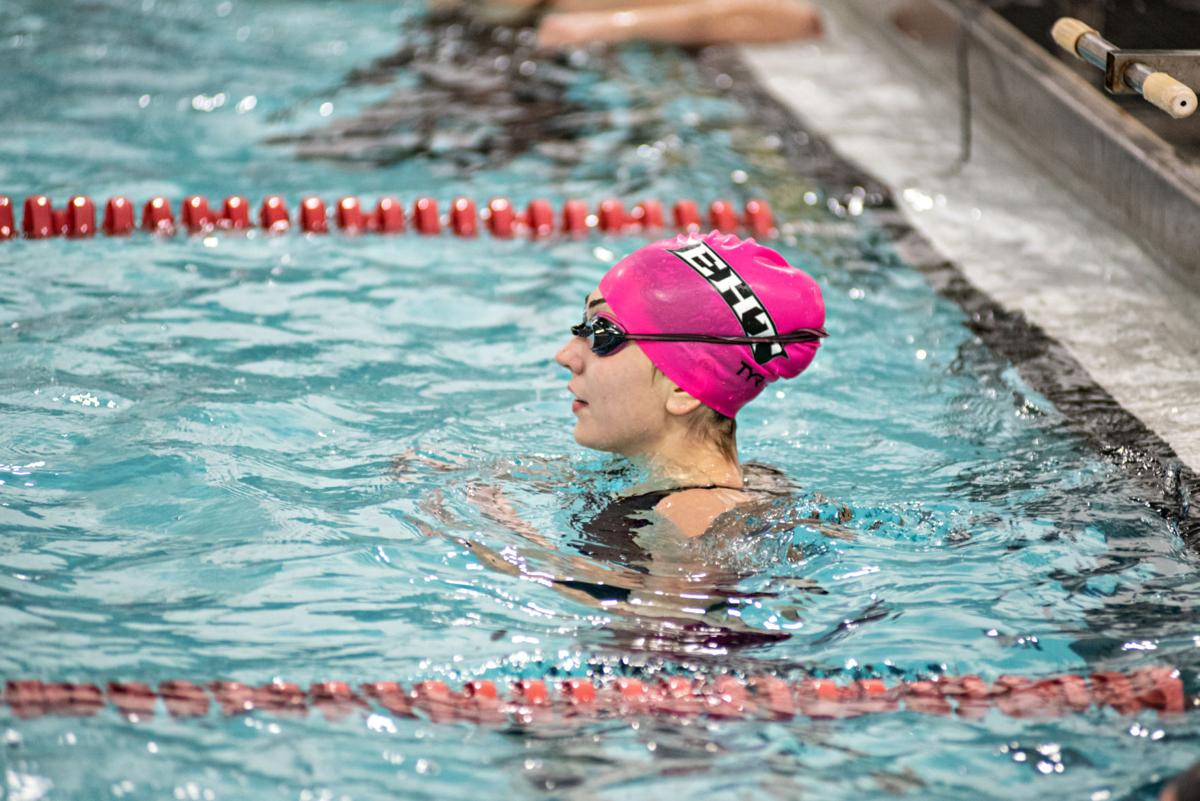 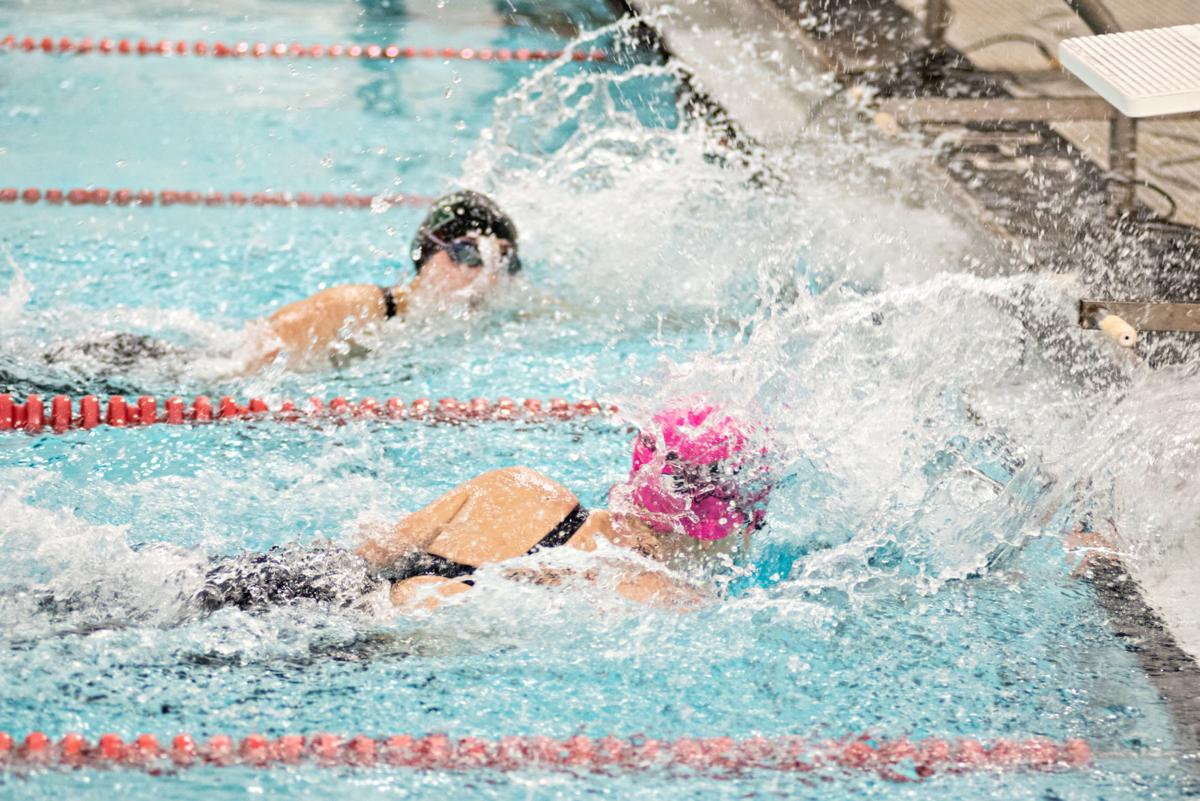 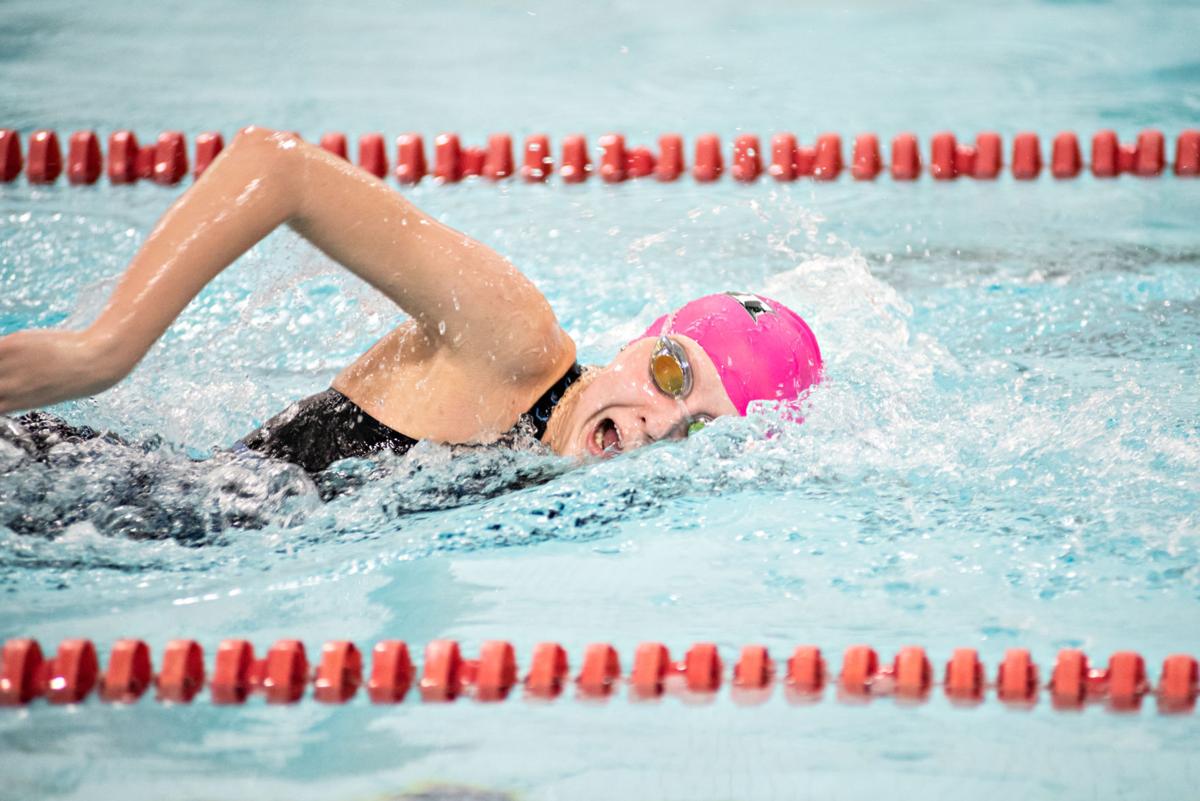 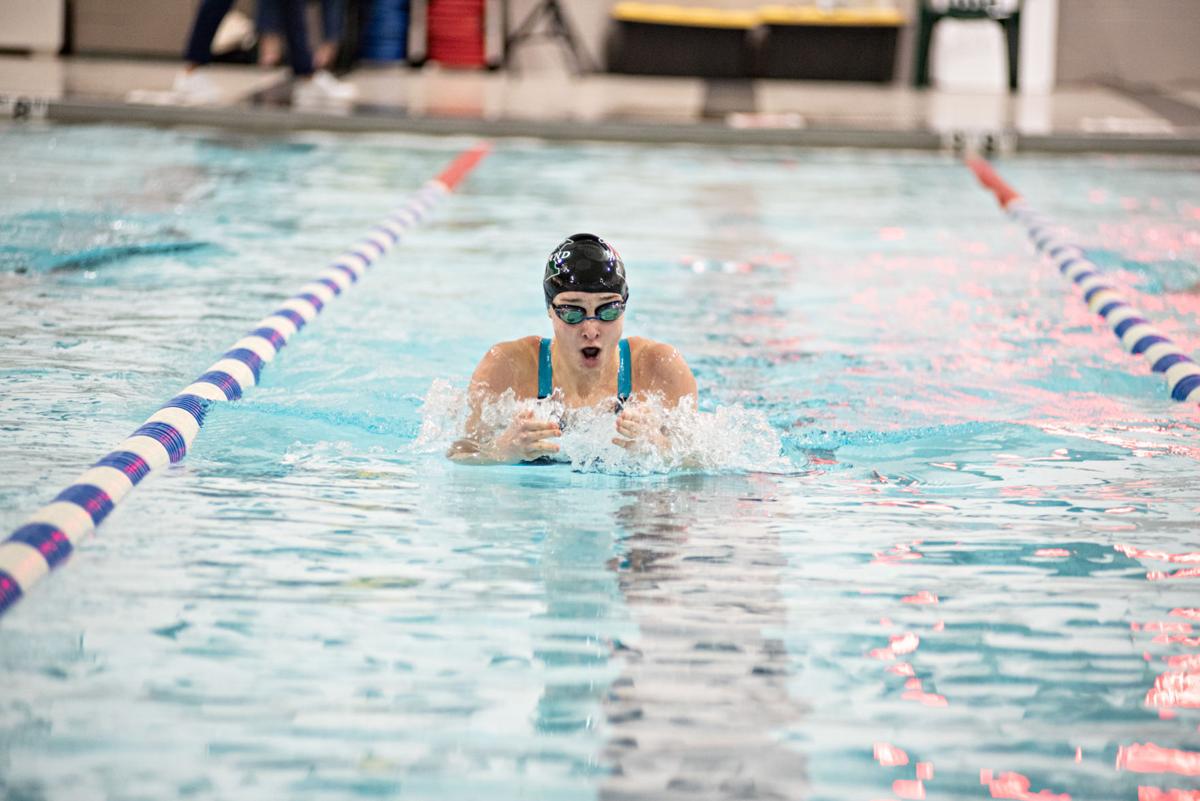 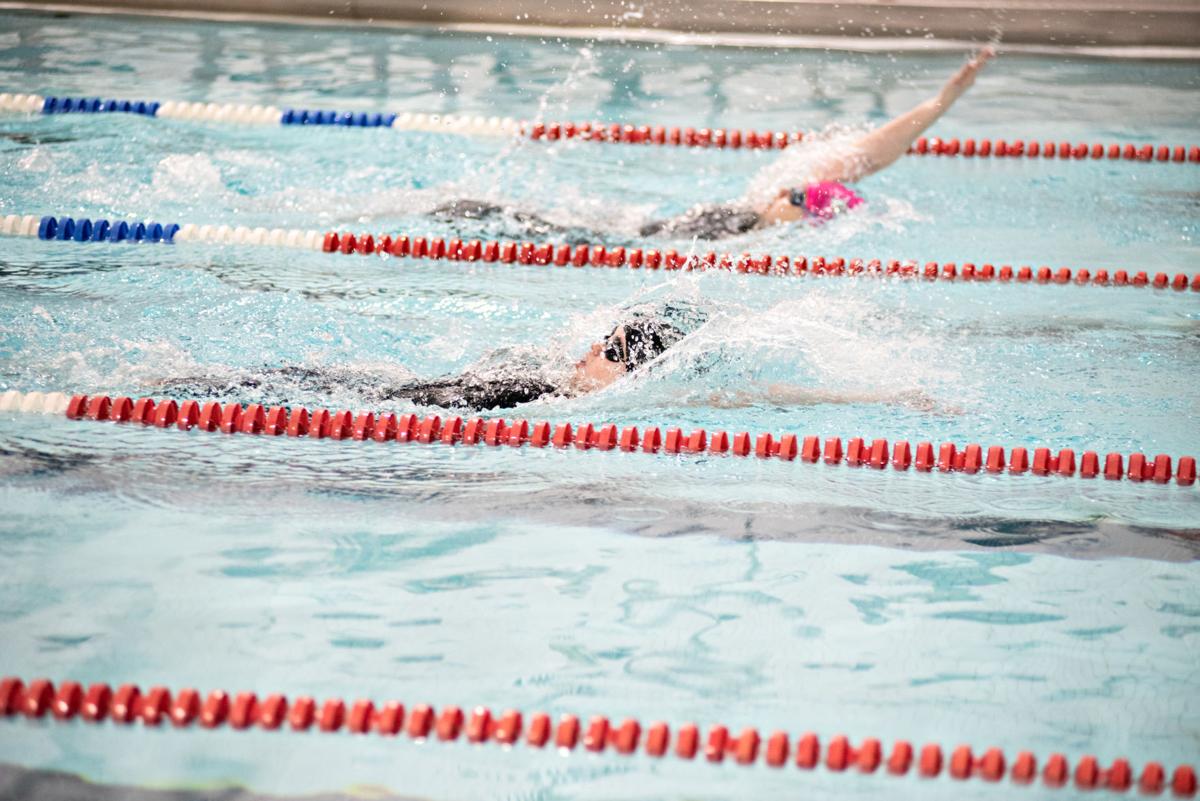 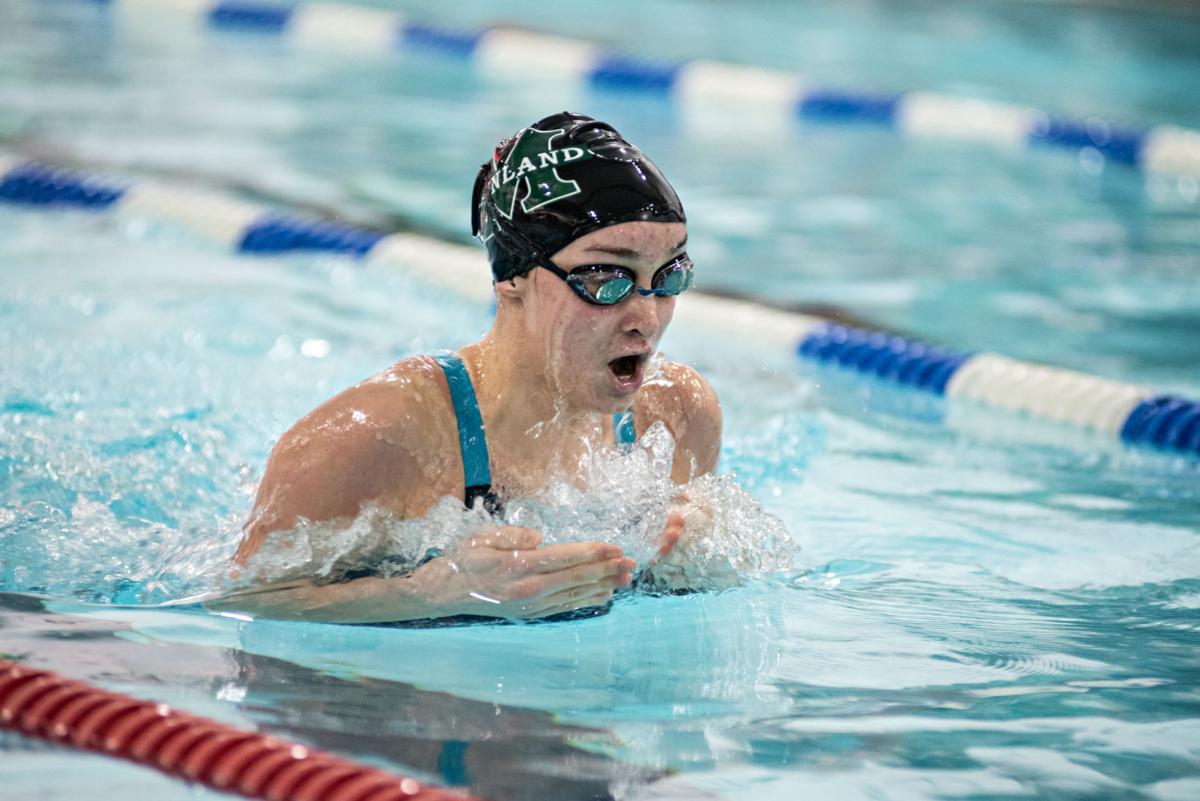 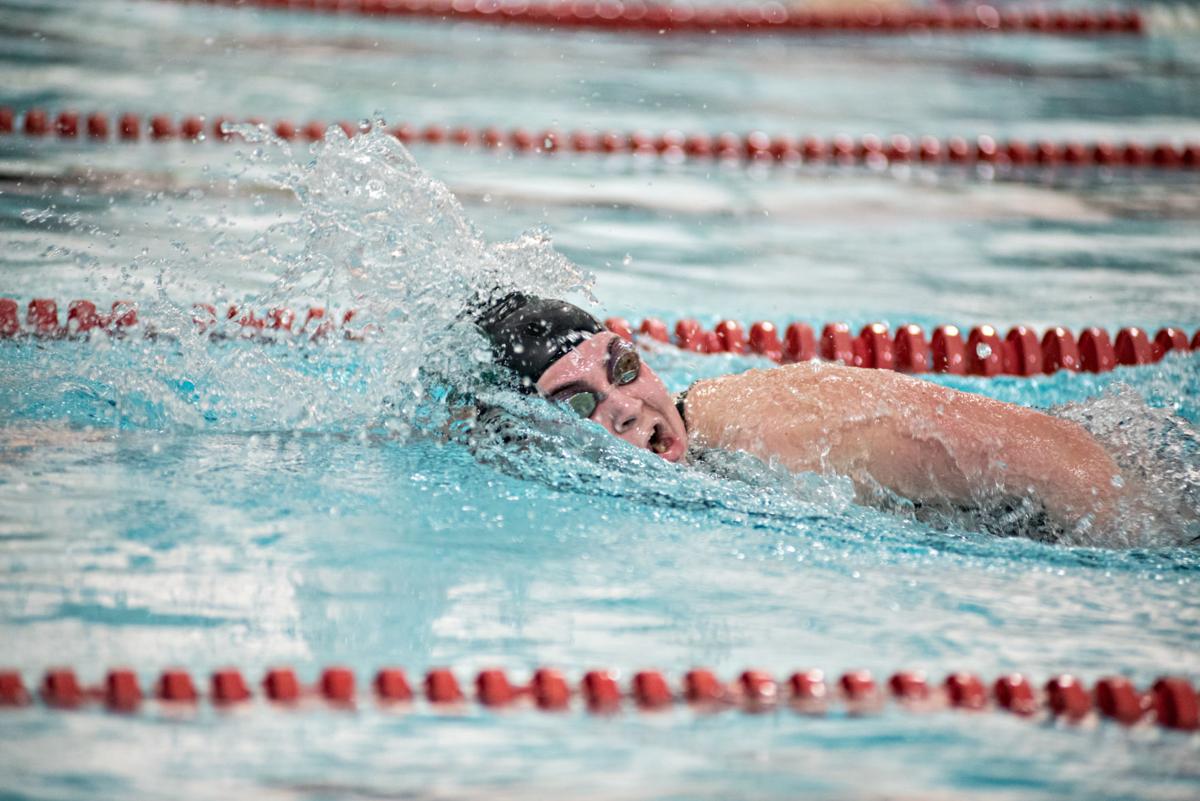 Jordyn Ricciotti heads to victory in the 400-meter freestyle for Mainland Regional during a win over Egg Harbor Township on Friday. 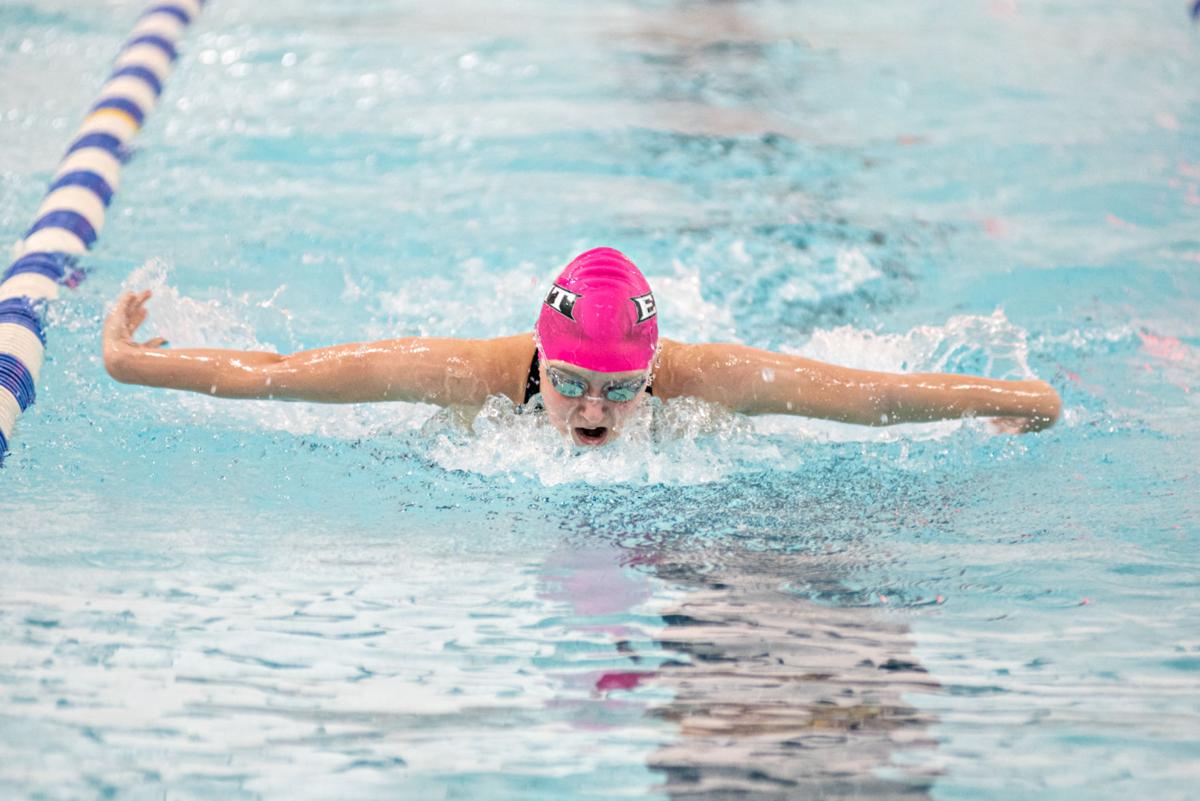 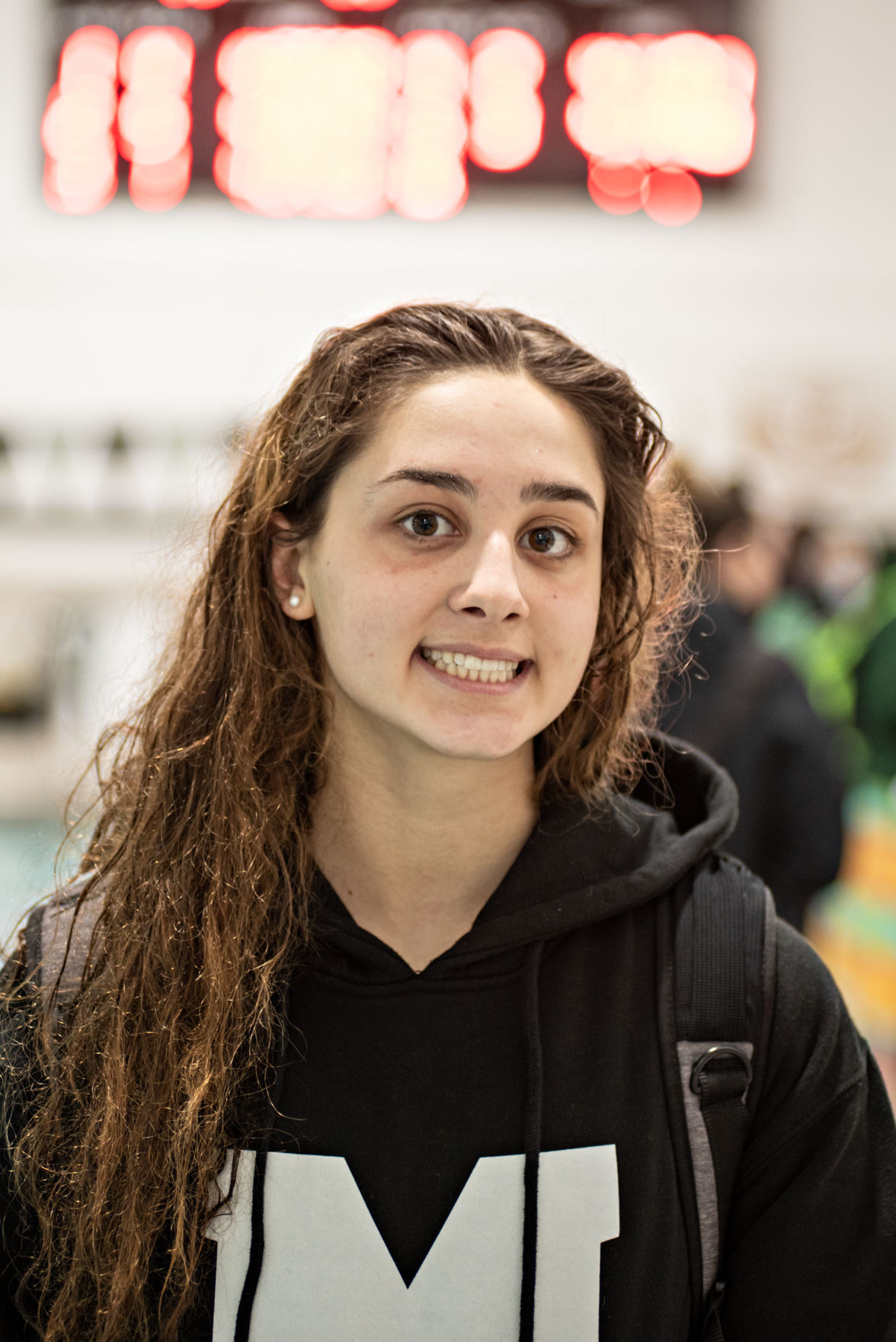 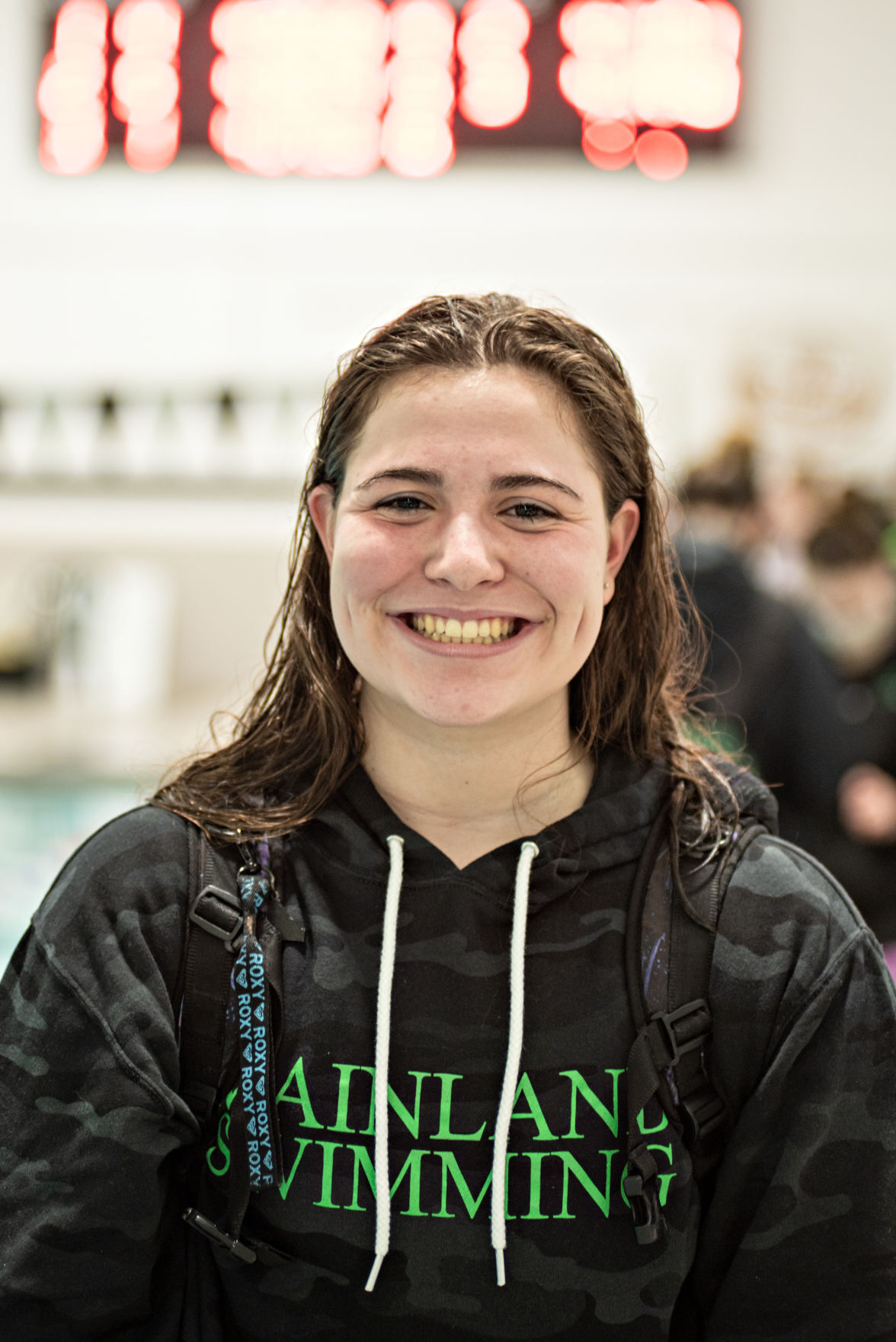 Mainland rallied in the second half of the meet to win it 91-79.

Mainland’s Katie McClintock turned in the only individual double for the Mustangs in a meet in which several outstanding swimmers met head-to-head. Five of the finishes for first place were by a tenth of a second or less.

It was the kind of meet that you might see in a state playoff showdown, but there will be no postseason this year due to the COVID-19 pandemic.

“The meet was so much fun,” Mainland coach Mike Schiavo said. “I’m really proud of the girls. They’re embracing this crazy season and doing the best they can with the circumstances in front of them.

McClintock won the 200-meter individual medley by more than eight seconds in 2 minutes, 18.87 seconds. She returned to take the 100 breaststroke by two body-lengths in 1:13.87.

McClintock anchored the winning 400 freestyle relay team that clinched the win in 4:09.56. The other swimmers were Monica Iordanov, Laci Denn and Jordyn Ricciotti.

“We knew it would be a close meet, and the fact that so many of the races came down to touches made it that much more exciting,” said McClintock, an 18-year-old Longport resident who will swim for the University of Wisconsin next season. “Everyone came in ready, and the girls dug down today and did really well.”

“I was a little nervous for a while. We knew Egg Harbor Township is a really good team,” said Iordanov, a 15-year-old sophomore from Linwood. “I was excited to see how we did, and I’m proud of everyone. We did well as a team and individually.”

Ricciotti won the 400 freestyle by more than 16 seconds. She’s a freshman but knows all about Mainland and its great rivalries.

“My brother, Mason, is a senior on the boys team, and I’ve been coming to Mainland meets since he was a freshman,” said Ricciotti, 15, of Northfield.

The Eagles stayed in it when Denise Yushan, Rhylee Cornell, Olivia Evans and Alexandria Cotter won the 200 freestyle relay by 0.05 seconds with a late rally. Mainland’s Summer Cassidy beat EHT’s Katie Carlos by 0.08 seconds in the 100 backstroke.

Cotter led the Eagles with two individual wins. EHT led 32-30 at the break following the 50 freestyle. The Eagles’ Kayla Nguyen, Ava McDonough, Yushan and Evans captured the 200 medley relay by 0.06 seconds over Mainland. EHT’s Cotter out-touched Ricciotti by 0.10 in the 200 freestyle. Evans won the 50 freestyle by 0.06 over Iordanov.

Cotter and Nguyen finished first and second, respectively, in the 100 butterfly to put EHT ahead 42-36.

“This might be the best meet in the state this year, since there’s no state tournament and many of the teams won’t meet,” Egg Harbor Township coach Mark Jamieson said. “I’m really proud of how our girls swam. Everyone swam really fast, and it was a great meet for both teams.”

Bella Canesi wasn’t focused on doubles and triples during the softball preseason.

The stage is set.

Jordyn Ricciotti heads to victory in the 400-meter freestyle for Mainland Regional during a win over Egg Harbor Township on Friday. 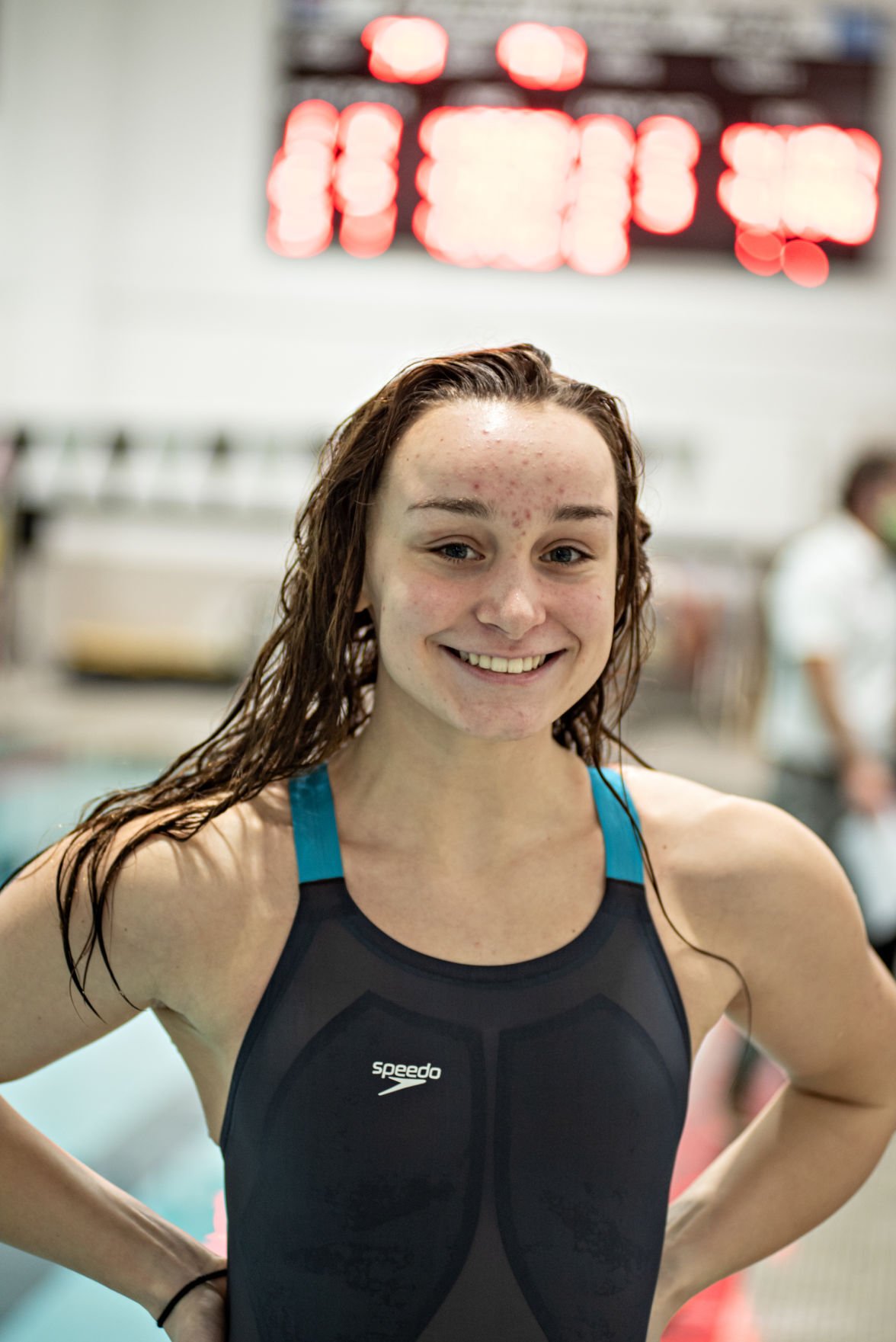