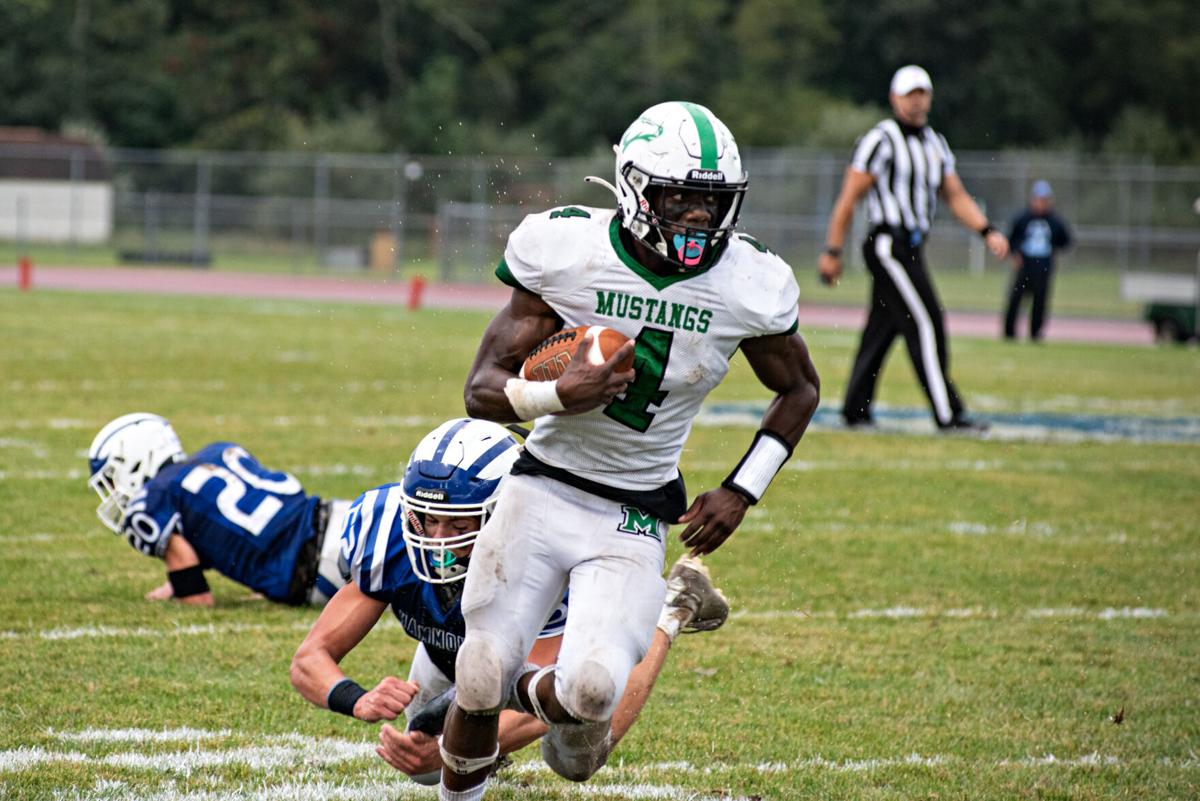 Junior running back Jabriel Mace picks up yardage for Mainland Regional during a 14-13 win over the Blue Devils on Thursday night in Hammonton. Mace scored one of the Mustangs’ two TDs. 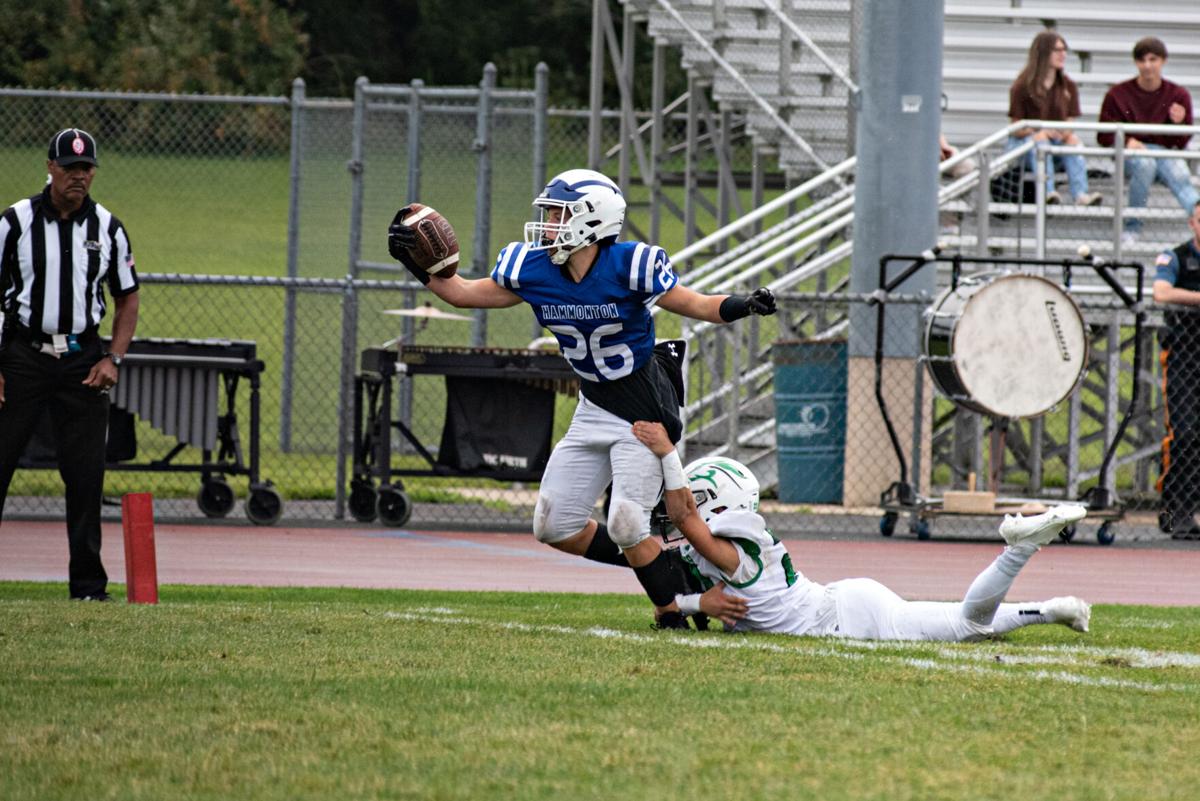 On September 9 2021, at Hammonton High School, the Blue Devills host Mainland Regional High School football. HHS #26 Justin Doughty battles his way across the goalline, putting the first points of the game on the board. 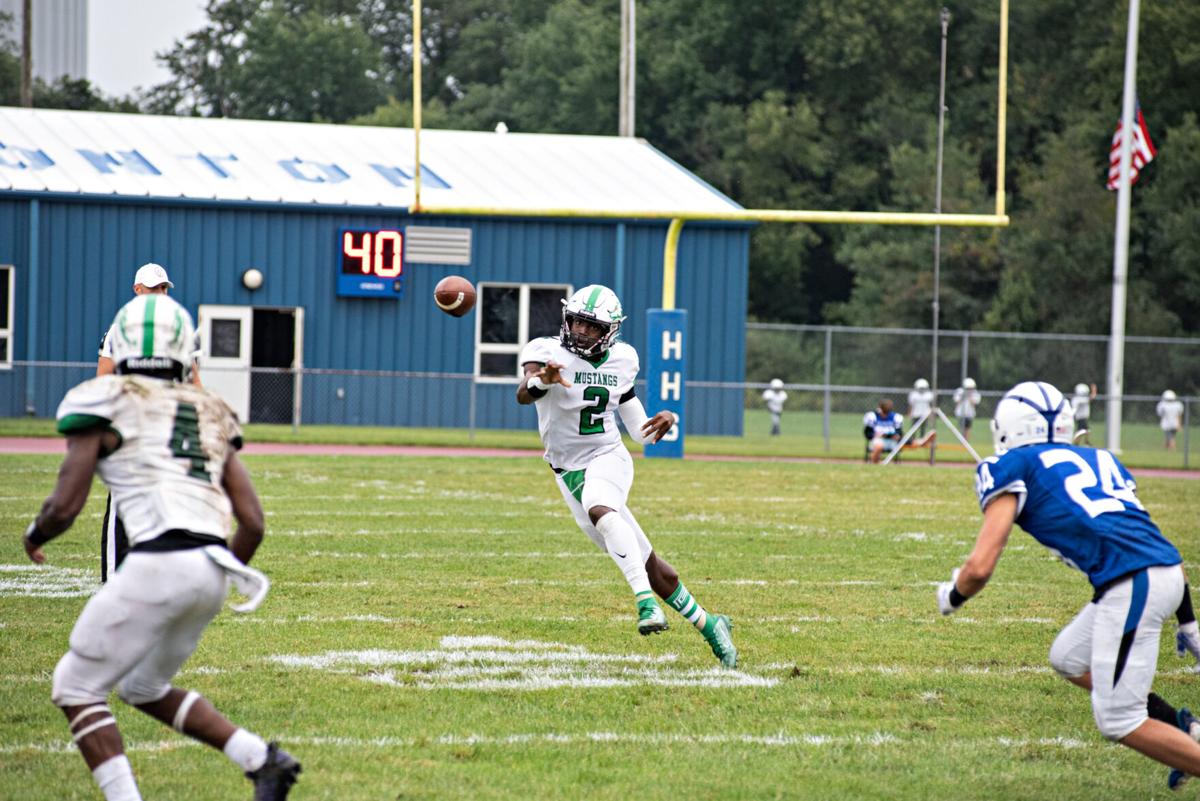 Ja’Briel Mace and Marlon Leslie, both juniors, each scored a rushing touchdown to lead the Mustangs to a 14-13 victory over Hammonton in a West Jersey Football League Royal Division game.

The Mustangs’ win was important in a close battle for first place.

“They didn’t quit, and that’s the biggest thing,” Mainland coach Chuck Smith said. “There were times (Thursday) when it looked like it was going to go the wrong way for us.

“It was a good test for us after last week’s debacle at Millville, and Millville was head and shoulders above us, but just the way we played in that game, it was a good response for us (Thursday), especially with a young team. They showed a lot of character (Thursday), and hung in there even though it looked dire for two and a half quarters there.”

Hammonton led 13-0 after the third quarter.

Mainland and Hammonton traded drives in the third quarter, but neither team scored. In the final minutes, however, Hammonton began to move the ball, setting the Blue Devils up at the Mainland 27 to start the fourth quarter.

Mainland was able to get the stop with 9 minutes, 47 seconds remaining in the game. After a drive into Hammonton territory, Mace rushed for a 15-yard touchdown with 6:40 left. After a missed extra-point attempt, the Mustangs trailed 13-6. The score capped a 47-yard drive.

Mainland’s defense then came up with a huge stop, forcing Hammonton to punt from its own 10. With 4:29 remaining, the Mustangs started their ensuing drive at the Hammonton 35.

About one minute later, Leslie broke a tackle and rushed for a 36-yard TD. Mace connected with sophomore wide receiver Connor Kallen on an option pass to complete the two-point play and give the Mustangs a 14-13 lead.

Smith said once Leslie scored and his team trailed 13-12, he talked to his coaching staff and said “we are not going for the tie, we are going for the win. And fortunately for us, it worked out.”

On the next series, Hammonton attempted to pass on third and fourth downs, but Mainland sacked the quarterback both times, including a fumble recovery on the final down with 51 seconds remaining. Noah Torres forced the fumble.

Mainland then ran out the clock to seal the victory.

Mainland received the opening kickoff Thursday, but quickly went three-and-out on its first possession. After a low snap on the punt attempt, the Blue Devils were able to prevent the Mainland punter from executing the kick, resulting in Hammonton taking over at the Mustangs’ 27-yard-line.

Mainland marched to the Hammonton 21-yard-line, but the drive ended in the red zone. The Blue Devils’ Kenny Smith then capped a 12-play, 81-yard, drive with a 7-yard rushing score with 8:15 left in the second quarter to extend the lead to 13-0.

Mainland’s next drive ended at Hammonton 36. The Blue Devils attempted to score again before the half, but the drive ended with Mainland’s Joe Sheeran intercepting a fourth-down pass in the end zone, a huge turning point in the game because it kept the Mustangs from falling behind by three scores, Smith said.

The turnover happened with 12 seconds remaining in the first half.

“We had our hands full just trying to stop them, especially in the first half,” Smith said. “Our defense made some adjustments and, especially near the end of the third quarter, really started to come up big and stop the ground attack by Hammonton. Our offense was opportunistic.”

Mainland made some mistakes Thursday, Smith said, but he hopes as the season unfolds, those mistakes will be fixed.

“The kids were resilient and persevered and hung on to win,” Smith said. “That’s why you continue to play the game. You never know what’s going to happen. Hopefully, we can build on this.”

For video and a photo gallery from the game, go to PressofAC.com.

Junior running back Jabriel Mace picks up yardage for Mainland Regional during a 14-13 win over the Blue Devils on Thursday night in Hammonton. Mace scored one of the Mustangs’ two TDs.

On September 9 2021, at Hammonton High School, the Blue Devills host Mainland Regional High School football. HHS #26 Justin Doughty battles his way across the goalline, putting the first points of the game on the board.