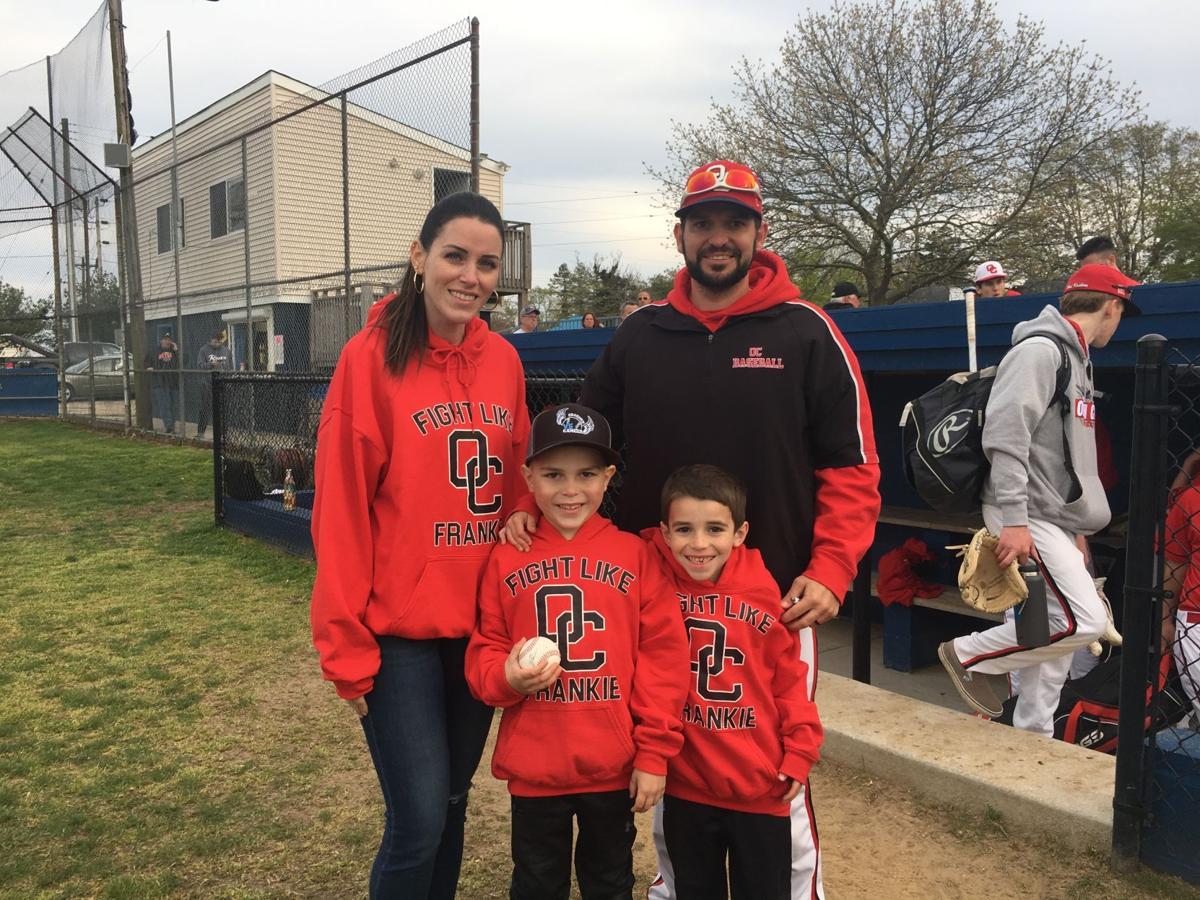 The LaSasso family during the Coaches vs. Cancer event in Somers Point on Friday. From left to right, Tiffany LaSasso, Frankie LaSasso, Gino LaSasso and Frank LaSasso. 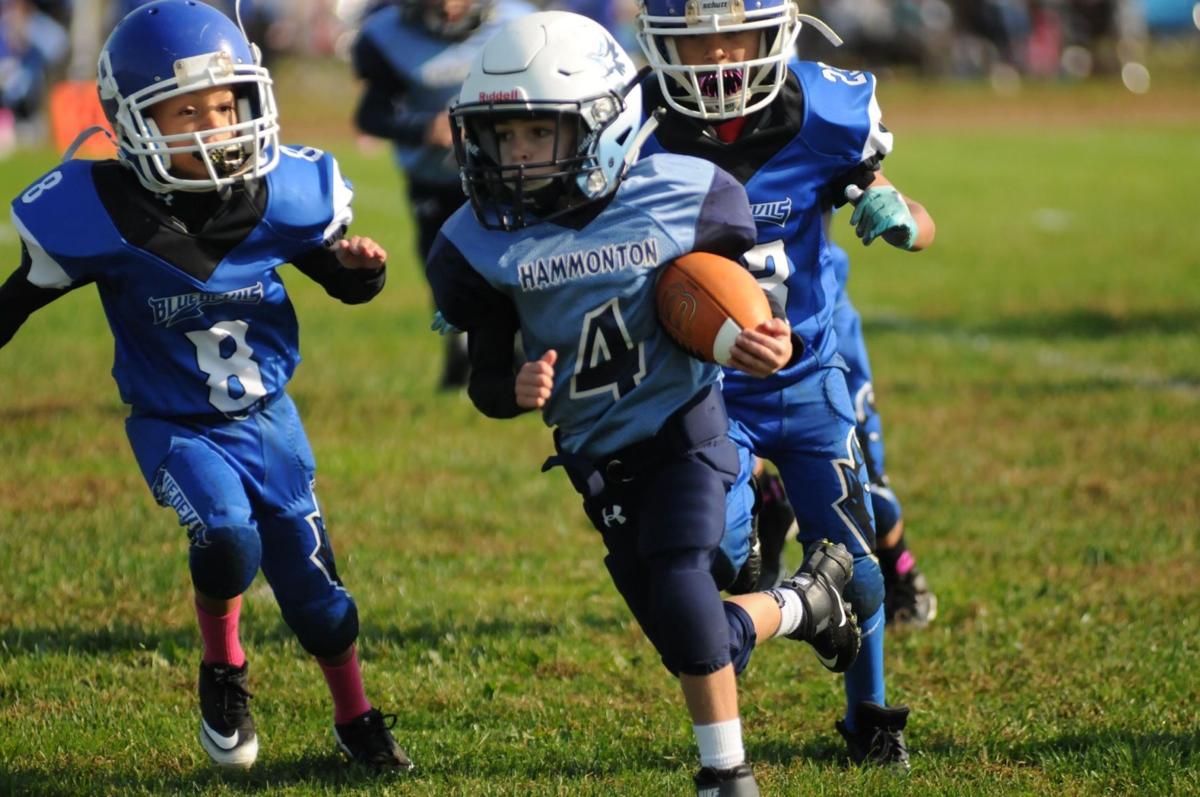 Frankie LaSasso, 7-years-old, while playing football for the Hammonton Hawks. 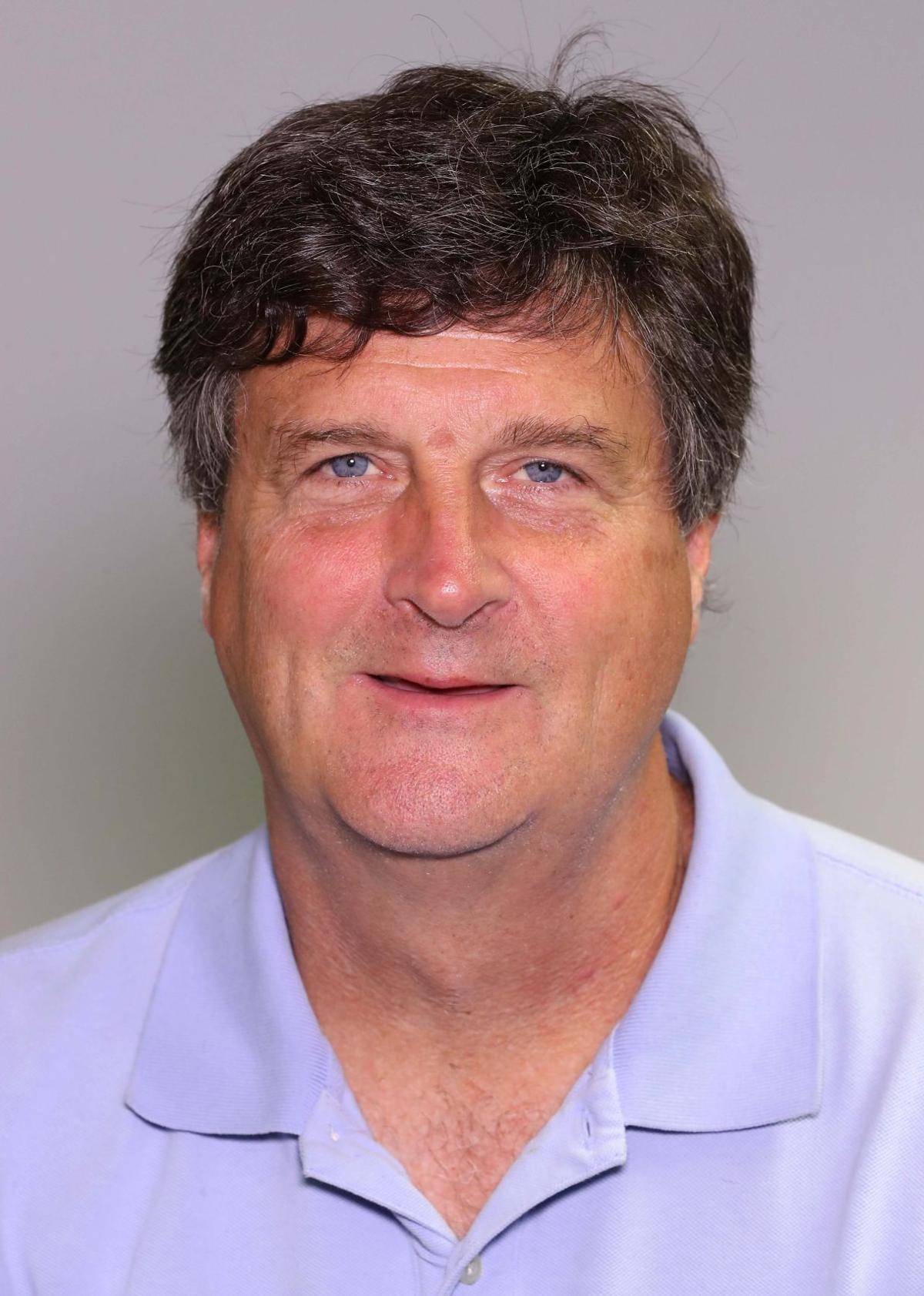 The 7-year-old Hammonton resident reared back and threw a strike to Ocean City High School catcher Joe Repetti for the ceremonial first pitch before the Red Raiders played Bishop Eustace in a Coaches vs. Cancer Classic game in Somers Point.

Just a few hours earlier, Frankie had undergone a chemotherapy treatment at an oncology clinic in Voorhees Township, Camden County.

“I joked with (Frankie) that more pro scouts have come to see him throw a baseball than have ever seen me throw one,” Frank said. “There were a lot more people than I thought. For a 7-year-old with that many eyes on him, he put that (pitch) in there.”

The scouts were there to see Bishop Eustace senior standout pitcher Anthony Solometo pitch against the Red Raiders, but Frankie’s toss might have been the pitch of the day.

He wore a white Ocean City baseball cap and a Red Raiders sweatshirt. The Ocean City players mobbed him as he walked off the field. Afterward, Frankie posed for pictures with his dad, his mom Tiffany, and his 6-year-old brother Gino.

“(Frankie) has never complained,” Frank said. “Hardly ever cries and his toughness has been absolutely inspirational. We are really proud of how he has handled everything.”

Frankie’s diagnosis came after he developed a cough and fever in the fall.

“In the beginning, it was really hard for us to explain to him what was going on,” Frank said. “But as the months have passed, he’s (become) very well versed in everything that’s going on with his body. He knows the names of his medicines. He understands what platelets are. He’s very curious, intelligent child.”

Ocean City is a barrier island on the Jersey Shore and bills itself as America’s Greatest Family Resort. Hammonton is landlocked in the middle of South Jersey and touts itself as the Blueberry Capital of the World.

But the two towns have a lot in common. Both have vibrant sports communities and both take care of their own. Frankie and his family know this firsthand.

On May 28, the Ocean City and Hammonton softball and baseball teams will play a doubleheader at Hammonton High School in the first annual Fight Like Frankie event to raise funds and awareness for childhood cancer.

“Everybody has stepped up and said, ‘Whatever you need.’ ” Frank said. “Hammonton is Hammonton. It’s a small town. We’ve lived here our whole life. Ocean City is where I work and has kind of become like a second home.”

LaSasso is a big-time name in Hammonton sports. Frankie’s great grandfather, the late Frank “Moose” LaSasso, was a Hammonton police captain and a longtime coach in town. He’s a member of the Hammonton and St. Joseph High School Halls of Fame and the Babe Ruth field at Hammonton Lake Park is named after him.

Frankie’s grandfather, Frank LaSasso III, has coached Hammonton youth sports for more than 40 years and been a volunteer football, baseball and softball coach at Hammonton High School since 2004.

Frank played football and baseball at Hammonton, graduating in 2004. Frank can remember feeding a bottle to Frankie — who is actually Frank LaSasso V — while in film sessions with the Ocean City football team.

Frankie is carrying on that sports tradition. He ran for plenty touchdowns for the Hammonton Hawks youth football team in the fall.

He started this spring baseball season 6 for 7 at the plate in the Hammonton Little League.

Frankie and Gino will be the Ocean City batboys when the Red Raiders baseball team plays in a highly anticipated matchup 4 p.m. Saturday at Gloucester Catholic.

When it comes to high school sports, the games are memorable and life lessons are invaluable. But maybe what’s most important are the relationships and friendships created.

The Ocean City and Hammonton sports communities will Fight Like Frankie every step of the way.

“You’re not alone,” Frank said. “There’s a lot of people around you who care.”

MIDDLE TOWNSHIP — A move to have the township sponsor this year’s Juneteenth event, in celebration of the anniversary of the end of slavery in…

GALLOWAY TOWNSHIP — The Jersey Shore Council of the Boy Scouts of America sponsored its annual Scout Show, themed “Escape the Great Indoors” a…

The LaSasso family during the Coaches vs. Cancer event in Somers Point on Friday. From left to right, Tiffany LaSasso, Frankie LaSasso, Gino LaSasso and Frank LaSasso.

Frankie LaSasso, 7-years-old, while playing football for the Hammonton Hawks. 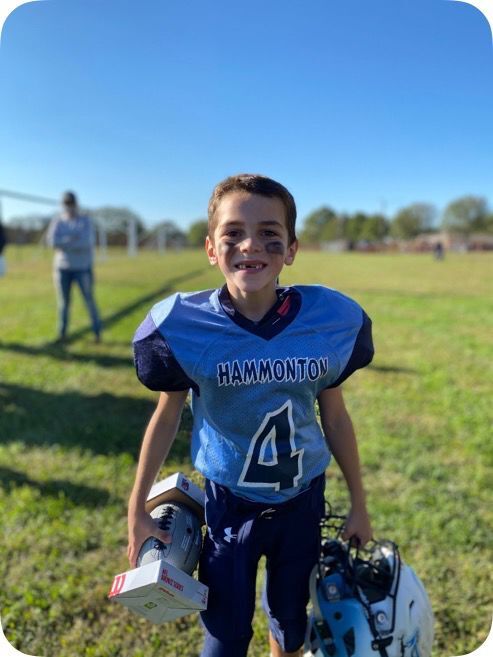