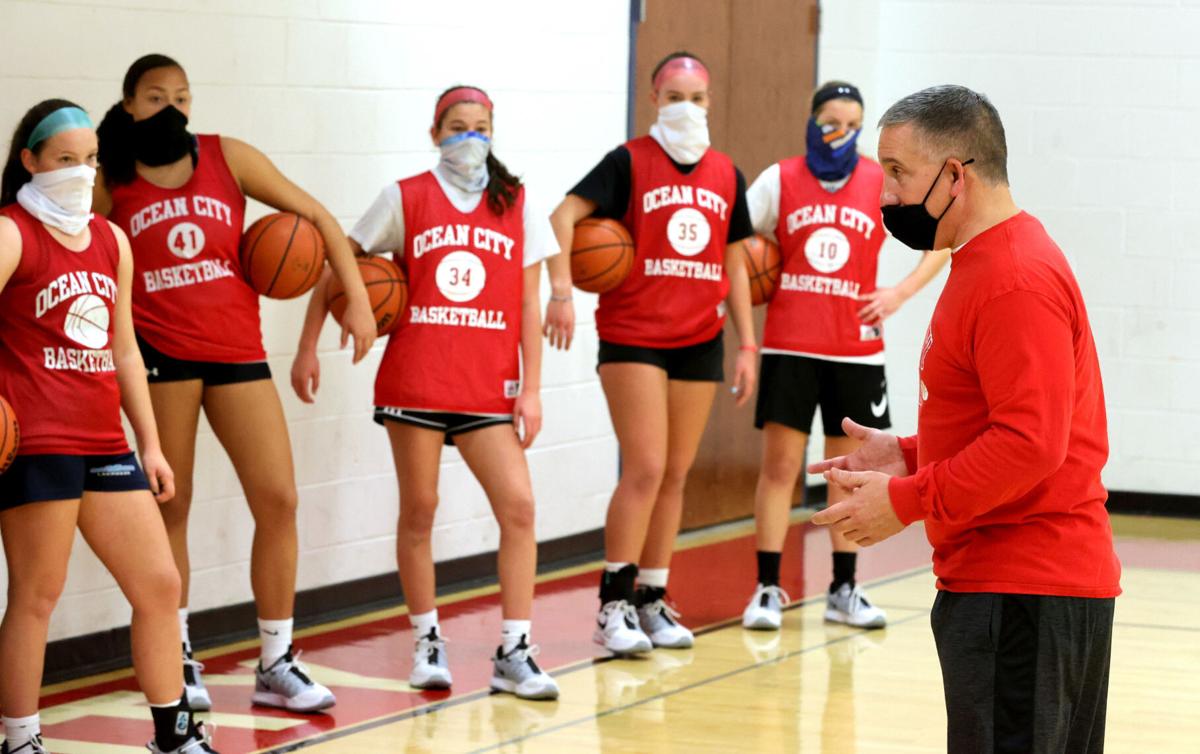 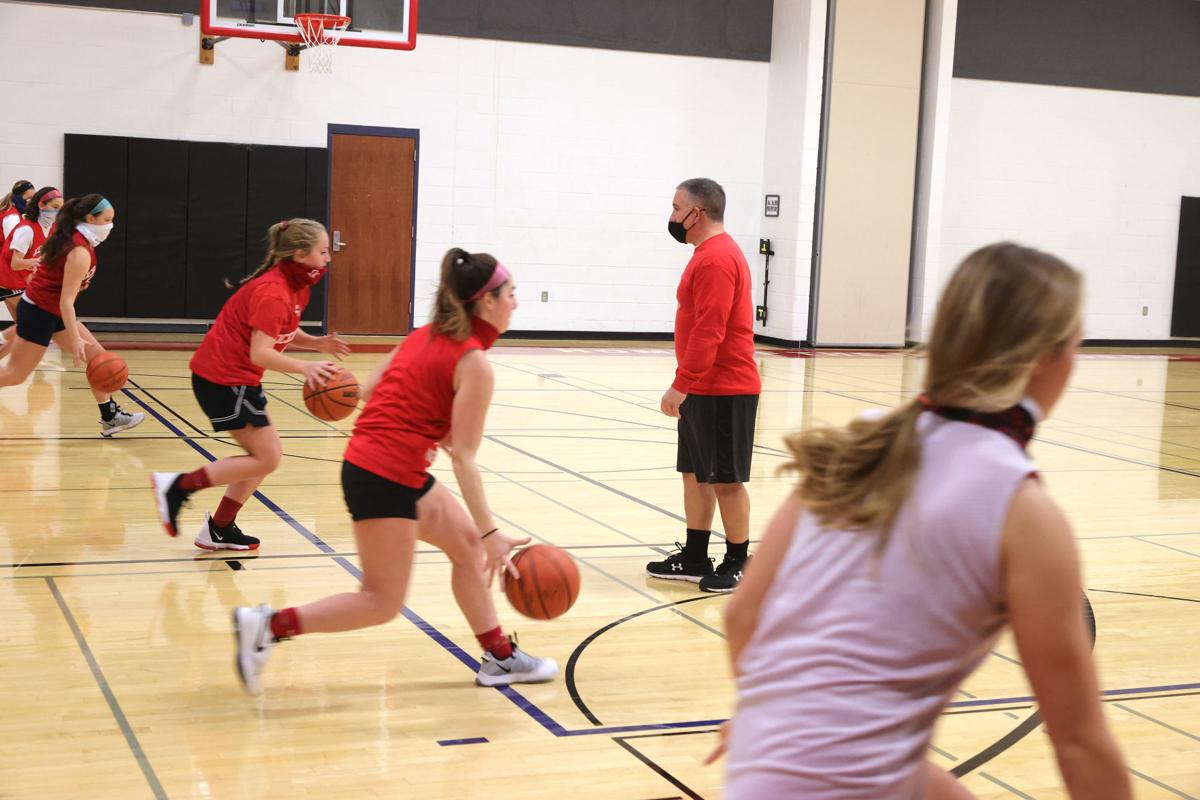 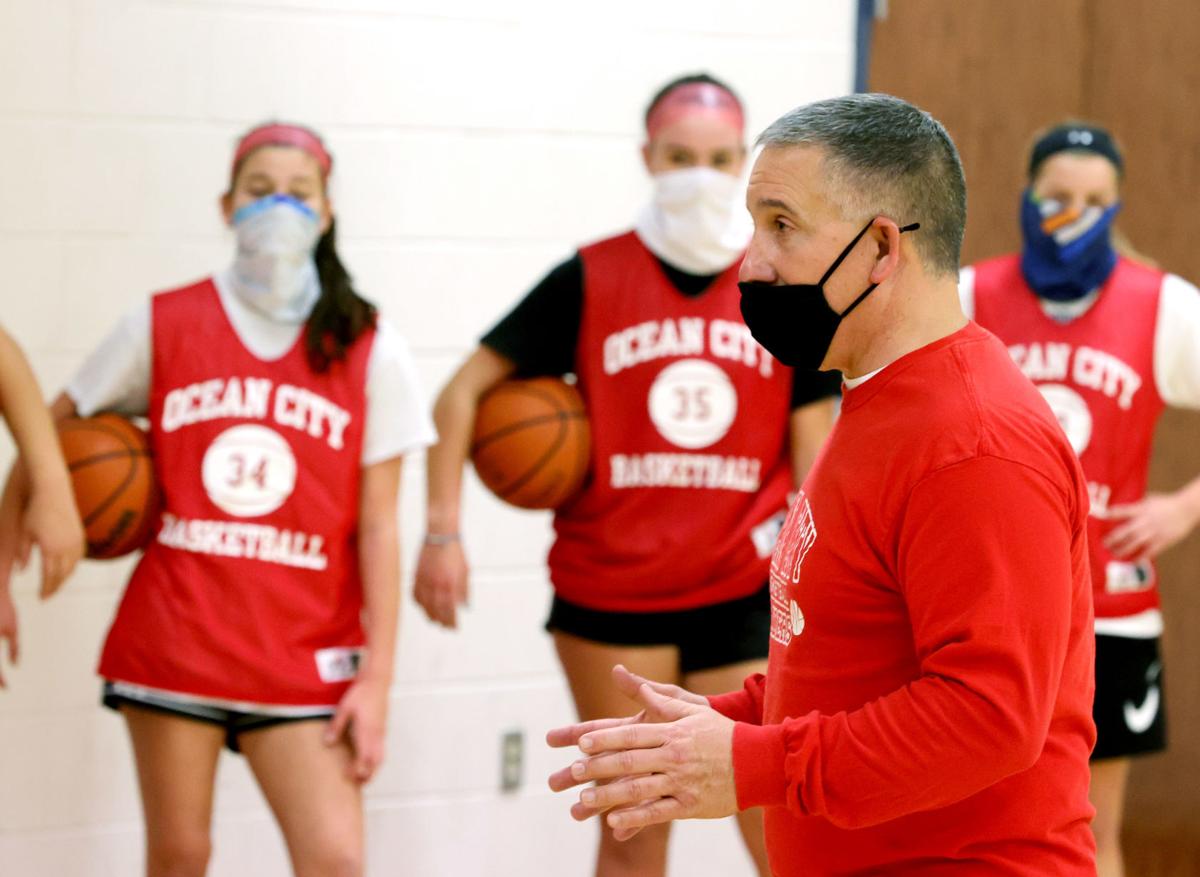 Ocean City High School girls basketball coach Paul Baruffi talks to his team during Monday’s first practice of the season. Baruffi wore a mask during the practice and several of the girls wore masks during down time or even while playing due to COVID-19. 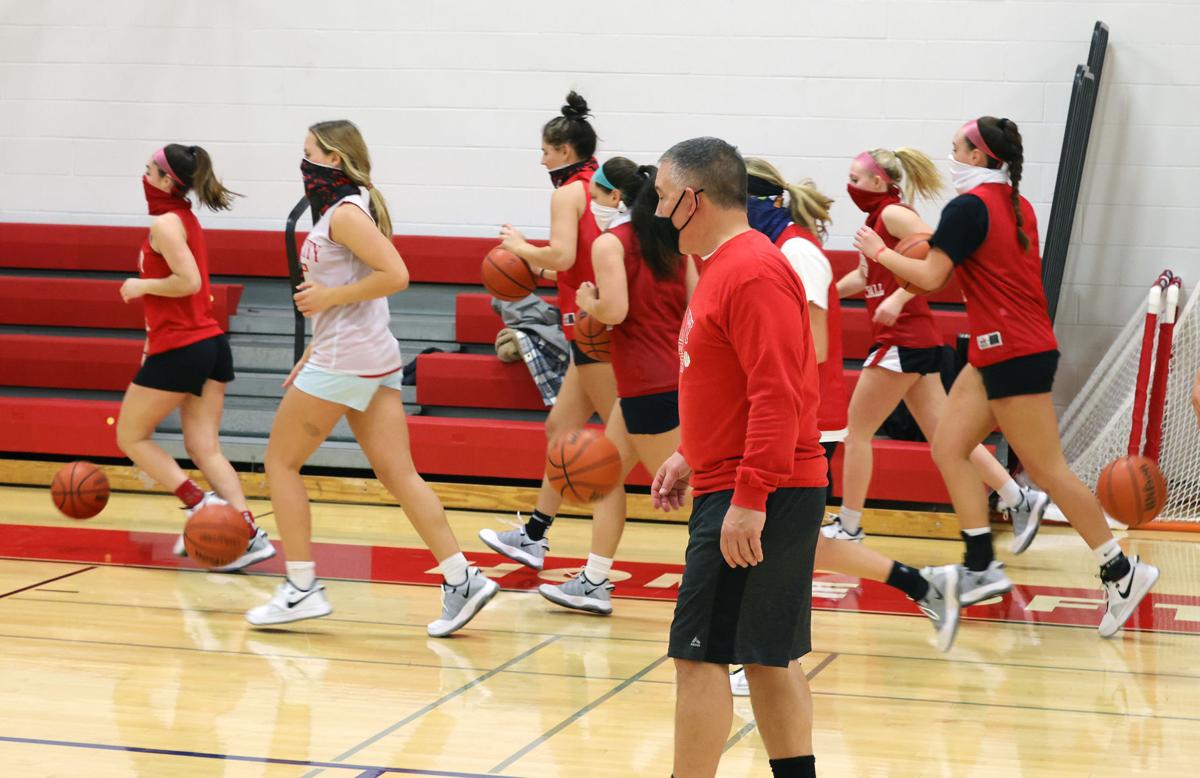 “They were completely flat,” he said.

In the middle of a global pandemic, though, that seemed a minor obstacle to overcome.

New Jersey high school basketball teams began practice/tryouts Monday. The COVID-19 shortened season starts Jan. 26 and ends the first week in March. Several Atlantic, Cape May, Cumberland and southern Ocean county schools, such as Atlantic City, will begin practice either later this week or next week because they are involved in virtual learning. Many schools involved in virtual learning do not allow extracurricular activities.

“I’m happy to get going and get the show on the road,” Ocean City senior Marlee Brestle said Monday. “With all the work we’ve put in the last four years, if we didn’t get this senior season, I would have been crushed, especially since I’ve been playing since I was in kindergarten.”

The Ocean City girls played one of the final games of last season. The Red Raiders beat Westampton Tech in a state Group III semifinal before no fans at Deptford High School on March 12. No one could have predicted that day that it would be 10 months before Ocean City was back in the gym. Practice/tryouts normally begin the Monday before Thanksgiving with the season starting in mid-December.

“It was a very strange situation with how (last season) ended,” Baruffi said, “and to come back now, it almost seems like two years ago.”

There was plenty of anticipation for Monday.

“I was texting everyone telling them to be ready,” Ocean City junior Marin Panico said.

Ocean City boys coach John Bruno admitted he had some trepidation about the upcoming season. But Monday’s tryouts renewed his enthusiasm.

“Before (Monday) it was a very kind of negative, down, bummer feeling,” he said. “Today, it’s back. It’s back. We’ll take each day one at a time and do everything we’re supposed to do. From there, it’s just basketball. I’m happy for the kids. The kids need a season.”

The Ocean City boys and girls teams practiced in pods Monday. All the coaches wore masks. The players wore masks when not participating in drills. Some even wore masks while playing.

The drills were the same as past practices. At Holy Spirit in Absecon, the boys team began with a team stretch, sprints and then layups and jump stops.

Coaches are thinking about COVID-19 protocols as much as they are inbounds plays and offensive sets.

“For the next six to eight weeks, (the new coronavirus) is always going to be in the back of your mind as to what can we do to help us get through the season for the kids,” Spirit boys coach Jamie Gillespie said. “You’re going to have to balance what you need to do (to prepare for games) with what makes sense. It’s definitely a challenge, but we’re hopeful if everybody does their part we’ll get a whole season in.”

For many players, Monday was the first time they had been back on the court in months. The new coronavirus also canceled the spring and summer AAU basketball seasons.

“We haven’t been able to play a lot of basketball,” Smith said. “We played outside a little bit, and that’s different than playing in a gym. It’s a struggle, but we have to work through it.”

Teams will play 15 regular-season games this season. There will be no state championships or Cape-Atlantic League tournament. Schools want to keep games as local as possible to protect against the virus.

“I want to work on our skill level,” Baruffi said. “We’re going to come and compete, but I think more important than anything, the girls get to play. They get to have some fun, and we’ll do the best we can.”

CAPE MAY — Cole Crosby was extremely hungry and unbelievably tired Monday afternoon. His muscles were tight, and there was swelling near his knees.

Ocean City High School girls basketball coach Paul Baruffi talks to his team during Monday’s first practice of the season. Baruffi wore a mask during the practice and several of the girls wore masks during down time or even while playing due to COVID-19.