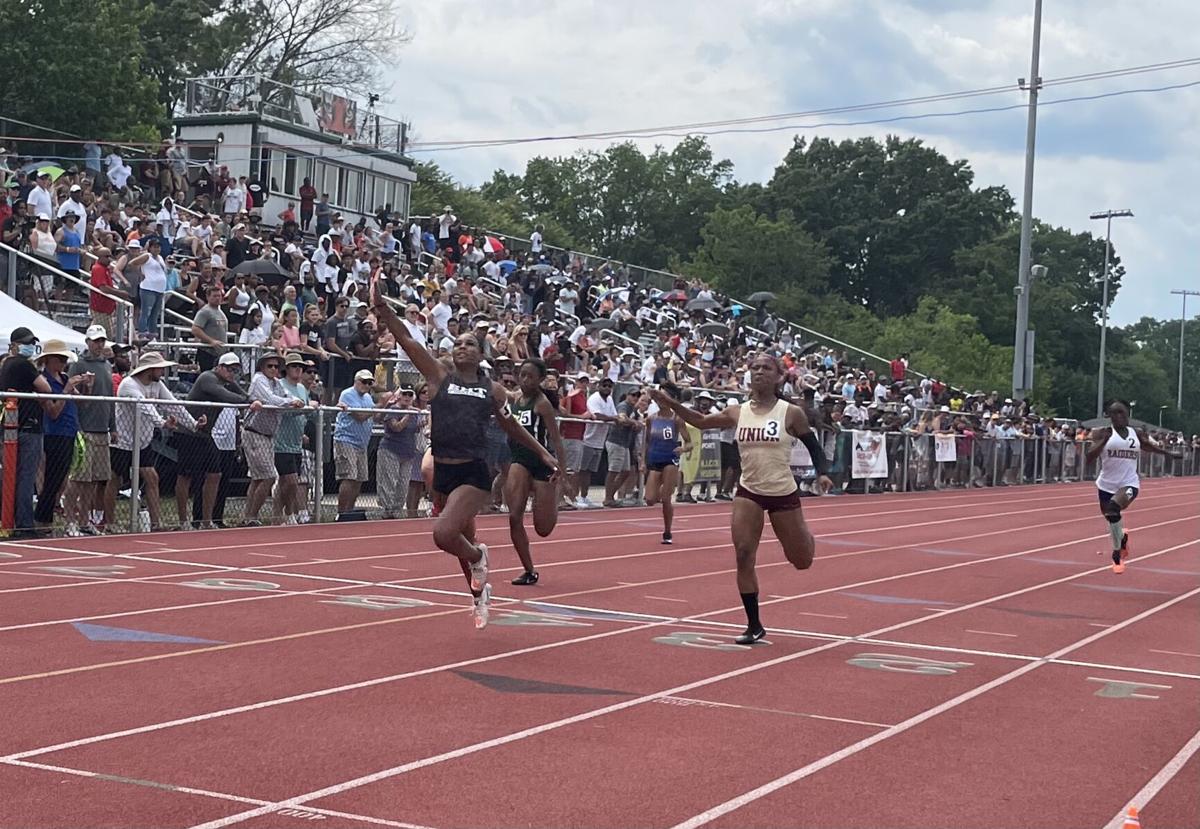 Egg Harbor Township High School senior Lauren Princz won her second Meet of Champions title Saturday in the 200-meter dash at Frank Jost Field in South Plainfield. She finished in 24.22 seconds, which is the best time in the state this season, according to MileSplit. 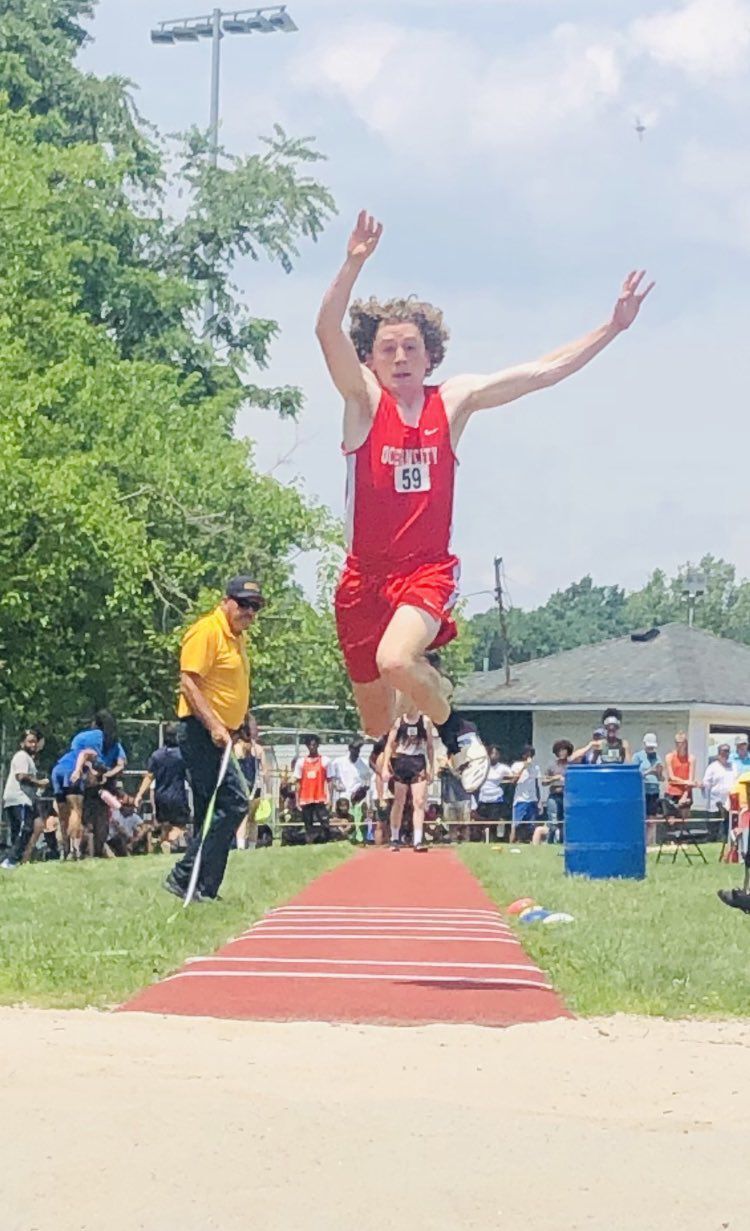 Dan Givens competes for Ocean City High School at the season-ending Meet of Champions on Saturday in South Plainfield.

The Egg Harbor Township senior won her second Meet of Champions title in the 200-meter dash at Frank Jost Field. She finished in 24.22, the best time in the state this season, according to the MileSplit track and field website.

The top-eight finishers in each event earned medals. The meet was not over at press time Saturday night.

“He was amazing,” Southern coach Scott Baker said of Gonzalez. “I think almost all of his throws (in the trails) would have won (Gonzalez only had one throw under 182 feet). There are bigger things ahead for him. He is only a sophomore. Watching him will be a lot of fun.”

As Princz crossed the finish line, she lifted her arm high in the air and let out a smile. Princz then embraced the girls against whom she had competed, hugging them and showing sportsmanship.

“It wasn’t a huge bang,” Princz said on whether or not she ended on a high note. “But it was a bang. I’m glad, and I’m blessed. I want to congratulate all the girls who did well (Saturday). All the seniors, and hope they do well in college.”

Princz finished second in the 100 dash in a personal-best 11.66. Jada Ellis of Manchester Township won in 11.57. After that race, the EHT senior said she could’ve run better.

The NCAA Division I Penn State University commit called it.

“Yeah, the 200 has been my race since eighth grade, and coming in as a freshman and winning,” said Princz, who also won the outdoor Meet of Champions in the 200 in 2018. “Even though I lost my 100 (Saturday after winning in the preliminaries), the 200 is my race, and I knew it.

“I had to get that through my head. I had to run my heart out.”

Princz won the 100 and 200 dash at the state and sectional meets and Atlantic County Championships this season. She is one of the most decorated and talented track athletes in Cape-Atlantic League history.

“She did amazing and definitely left a mark (on EHT),” Eagles coach Erika Vazquez said. “We are very proud. She went out there and ran great. I think that she is pretty happy. She PR’d in the 100, even though she came in second. She is extremely happy about that, and winning the 200.

“We are definitely proud of her. She has left her mark on New Jersey tack, and we can’t wait to see what she is going to do next year at Penn State.”

“Not just on the track, she is a great, well-rounded woman,” Vazquez said. “She is one of our captains, and she brings a lot to the team. It’s been an honor to be her coach over the last four years.”

Princz is looking forward to continuing setting records and collecting accolades in college.

“I’m excited to get to the top-tier, with a top-tier coach (Penn State’s John Gondak) and a top-tier program,” Princz said. “I know I can run faster. ... I’m happy. I’ll miss New Jersey. I’ll miss EHT. I’ll miss my coaches, my track friends, my teammates and everyone who supported me. That’s all I have to say. Lauren Princz out.”

McLaughlin won the state and South Jersey Group III titles in the 400 hurdles. The 18-year-old Galloway Township resident was the top seed entering the event Saturday.

“I love it,” said McLaughlin, who is committed to run track at NCAA Division I St. Peter’s University. “I came in No. 1, and it was a tight race, but I came in good .It was a good race. It was extremely close. It was tight.”

Braddock won both the state and sectional titles in the 3,200, setting meet records in both and finishing in a personal-best 8:48.64 last week. He is committed to NCAA Division I University of Virginia.

Braddock, one of the top distance runners in the state, was in the lead until the last two laps Saturday. He said he was “a little greedy” Saturday, going for the time rather than focusing on “a great runner like Jackson Barna on your back.”

“It wasn’t a bad season. Coming up to this it was a good season,” Braddock said. “But when you can’t finish with a win, it’s not ideal. I learned my lesson (Saturday). I obviously wanted to end on a high, but that’s not always possible. I’m happy with what I got out of it. I learned a lot, especially this season, to be a better runner and better racer.

What was the craziest story in sports yesterday?

Austin Snyder wanted to build off his successful freshman campaign from 2019 and make up for time lost last year.

Egg Harbor Township High School senior Lauren Princz won her second Meet of Champions title Saturday in the 200-meter dash at Frank Jost Field in South Plainfield. She finished in 24.22 seconds, which is the best time in the state this season, according to MileSplit.

Dan Givens competes for Ocean City High School at the season-ending Meet of Champions on Saturday in South Plainfield.