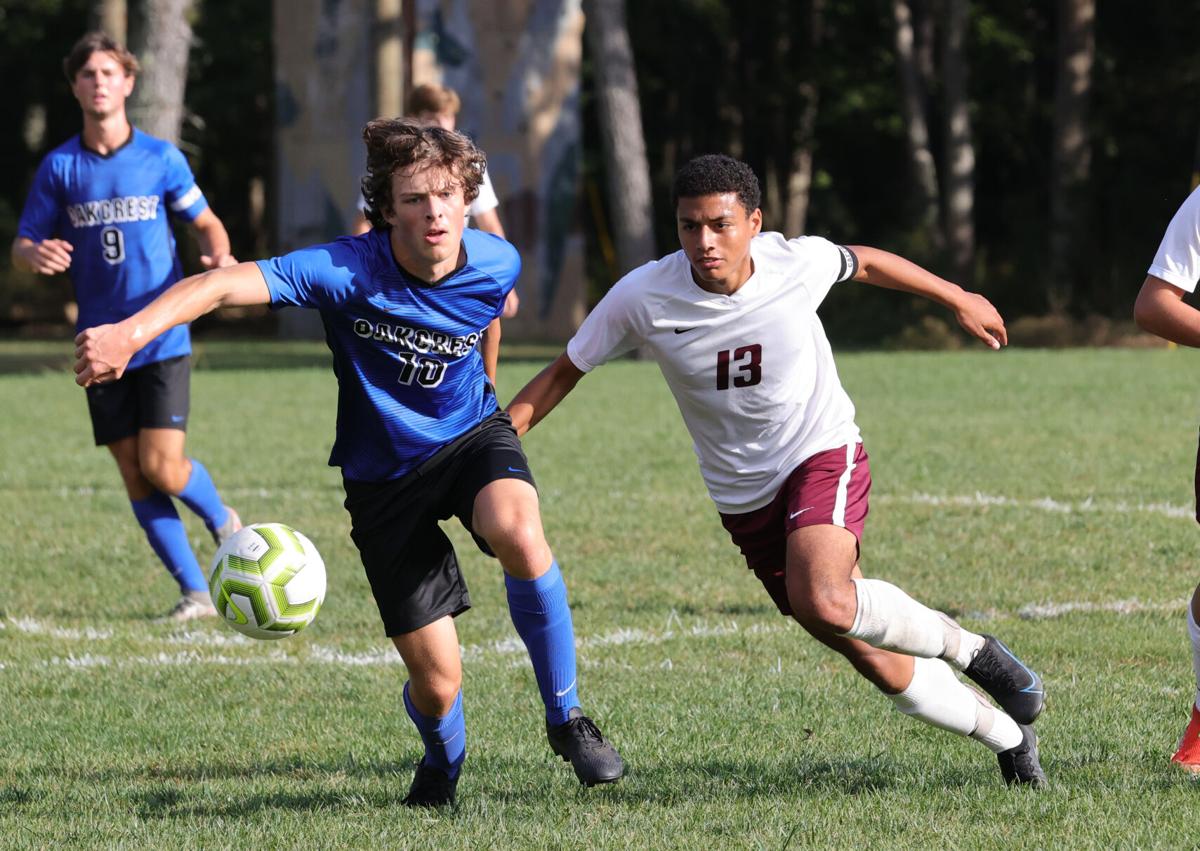 Oakcrest’s Clayton Husta, left, battles for the ball with Cedar Creek’s Christopher De Leon during the first half of their game Thursday in Mays Landing. 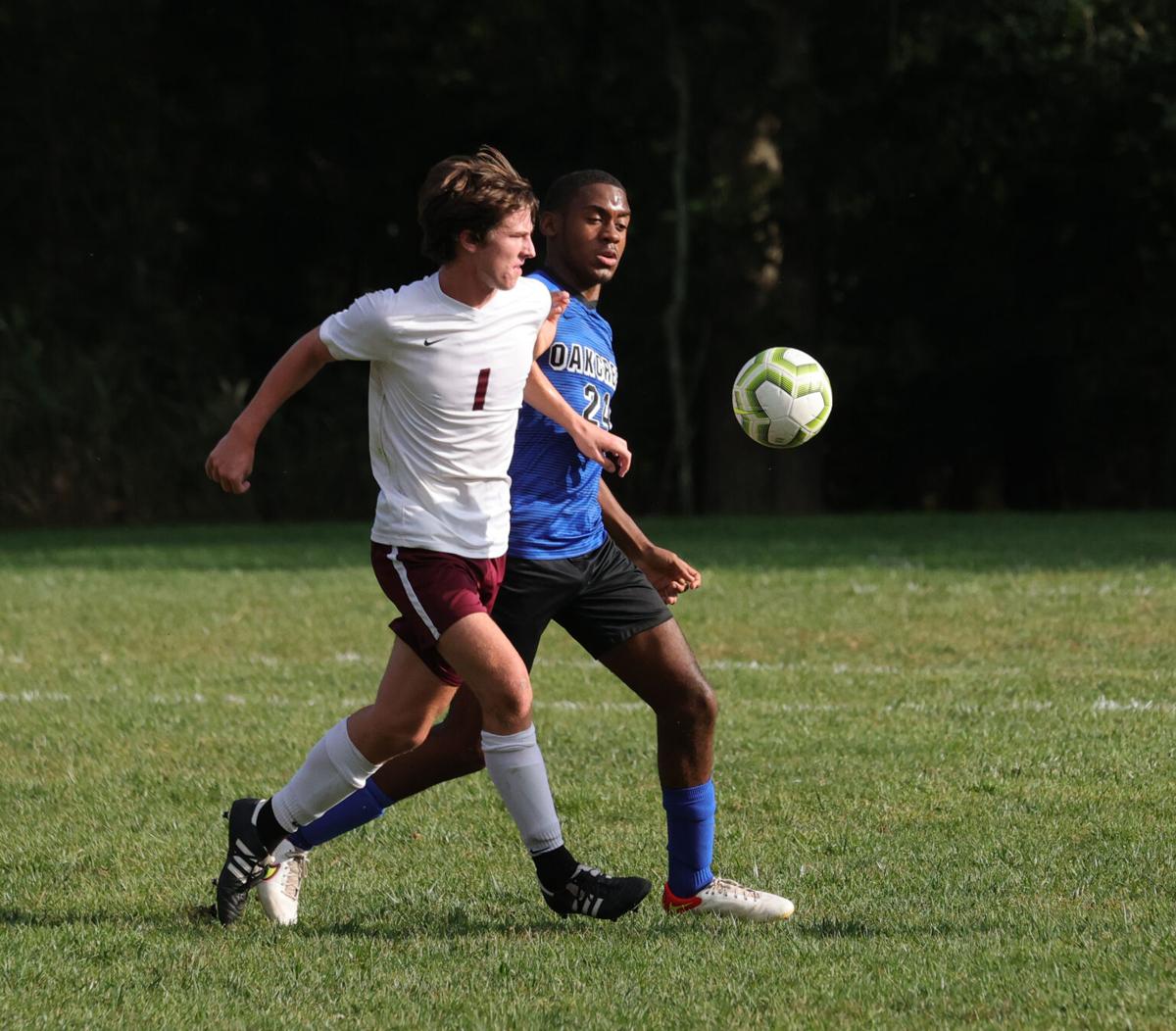 Rourke Watson scored in the opening minute to lead the Cedar Creek High School boys soccer team to a 2-0 victory over Oakcrest in a Cape-Atlantic League National Division game Thursday.

But that wasn’t his intention.

“If I’m going to be honest, I meant to cross that ball,” said Watson, 17, of Egg Harbor City. “The goalie was out of position (and) it just ended up in the net.

“I don’t know what else to say,” the senior attacker added with a smile. “I was not expecting that at all.”

Watson scored just 24 seconds into the game off an assist from fellow senior Laurence Strazzeri. Cedar Creek coach Shawn Cohen added that the ball must have gone off Watson’s foot the wrong way, but that the team will take those types of goals every game.

“We will take that as a good omen at the start of the game,” said Cohen, adding that playing the Pirates’ Greater Egg Harbor Regional High School District rivals Absegami and Oakcrest “is always a tough game. We are sister schools. We bring that blood, they bring that blood every time.”

“That one stayed with us since then,” Cohen said about their first game this season with Oakcrest. “I thought we played well. We controlled the ball for 80% of the time, but we didn’t come away victorious.

The Pirates are 5-1 since that loss, winning their last five games. Cohen doesn’t like to discuss the winning streak with his team, saying they just focus on one game at a time.

“We had an unlucky game against them the first time, but (Thursday), me and my senior boys Laurence Strazzeri, Jason DiFilippo (and) Chris Deleon, we pulled it through,” Watson said. “I’m really satisfied with this game (Thursday).”

The Pirates huddled together and talked about how important it was to add to the lead. The team all agreed to start the second half strong.

In the 43rd minute, junior defender Adam Smith scored off an assist from Strazzeri, which capped the scoring. It was Smith’s first career goal, Cohen said.

Smith took the ball away twice from Oakcrest players who attempted to clear the zone. After the ball was passed back to him, he just took the shot.

“That was a huge goal,” Cohen said. “(Smith) is not a goal scorer. He shut down (Oakcrest standouts) Jack (O’Brien) and (Andrea Johnson). He gave us a little insurance (on offense), too.”

Oakcrest starts eight freshmen or sophomores, first-year coach Scott Meile said. The Falcons hey plan going in, but that changed after the Pirates scored in the opening minute.

Sophomore goaltender William Grayson, who recently had a shutout against Absegami on Tuesday, finished with five saves for Oakcrest.

“We have a lot of young kids, and I think there is a panic to them where they are not quite ready yet,” Meile said. “I think (Cedar Creek) came out way more aggressive than what we were ready for.”

O’Brien and Johnson are both sophomores, and the Pirates’ best players are mainly seniors, Meile added.

“When you get into that situation, going against kids who have been through it a lot vs. kids who haven’t, we just didn’t match their intensity from the beginning,” he said. “I thought we did in the last 20 minutes, but by that time you’re already down 2-0.”

“They will be another tough opponent,” Cohen said. “I think this (momentum) will carry.”

Kyle O’Connor made five saves for Cedar Creek in the shutout.

Oakcrest’s Clayton Husta, left, battles for the ball with Cedar Creek’s Christopher De Leon during the first half of their game Thursday in Mays Landing.