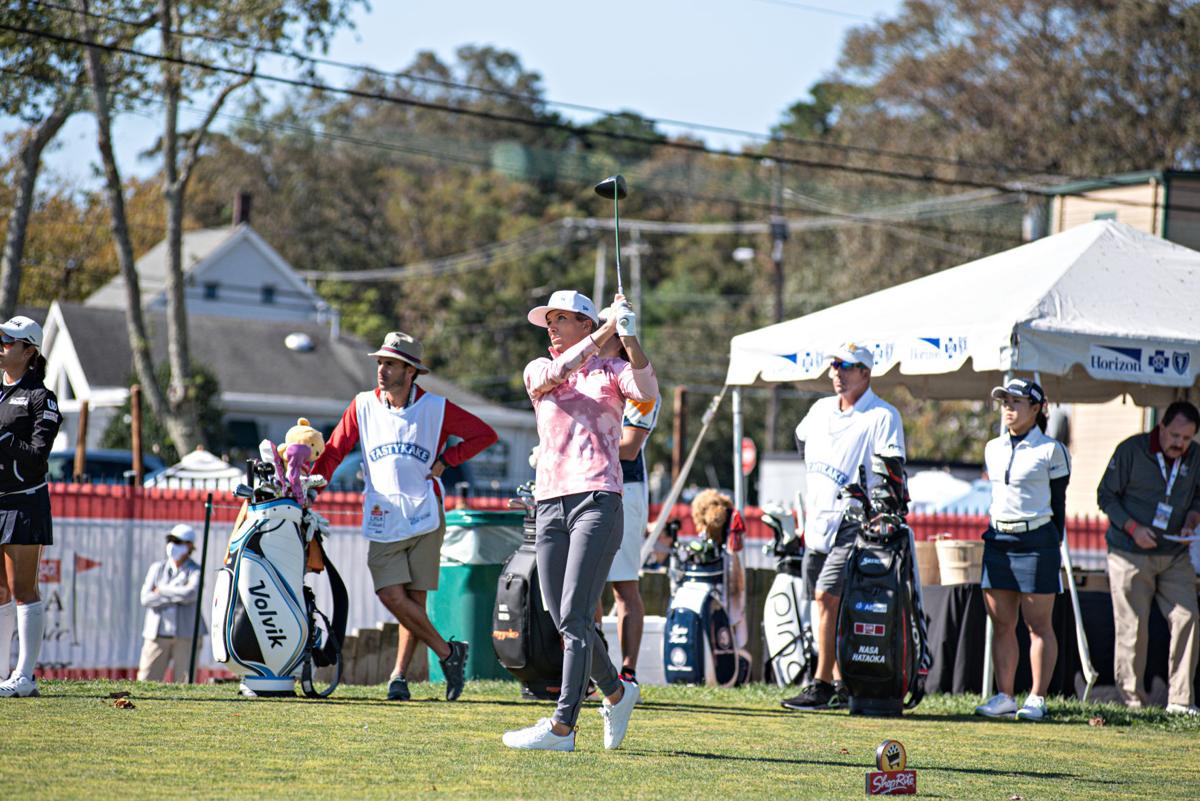 Mel Reid takes her tee shot on the first hole at Seaview Golf Club last year during the third round of the ShopRite LPGA Classic in Galloway Township.

The ShopRite LPGA Classic will feature for the first time an all-female broadcast team on the Golf Channel. Clockwise from left top, Cara Banks will host the telecast, along with on-course reporters Kay Cockerill and Karen Stupples, and Paige Mackenzie will call holes. Bottom left, LPGA Hall of Famer Judy Rankin will be the analyst. 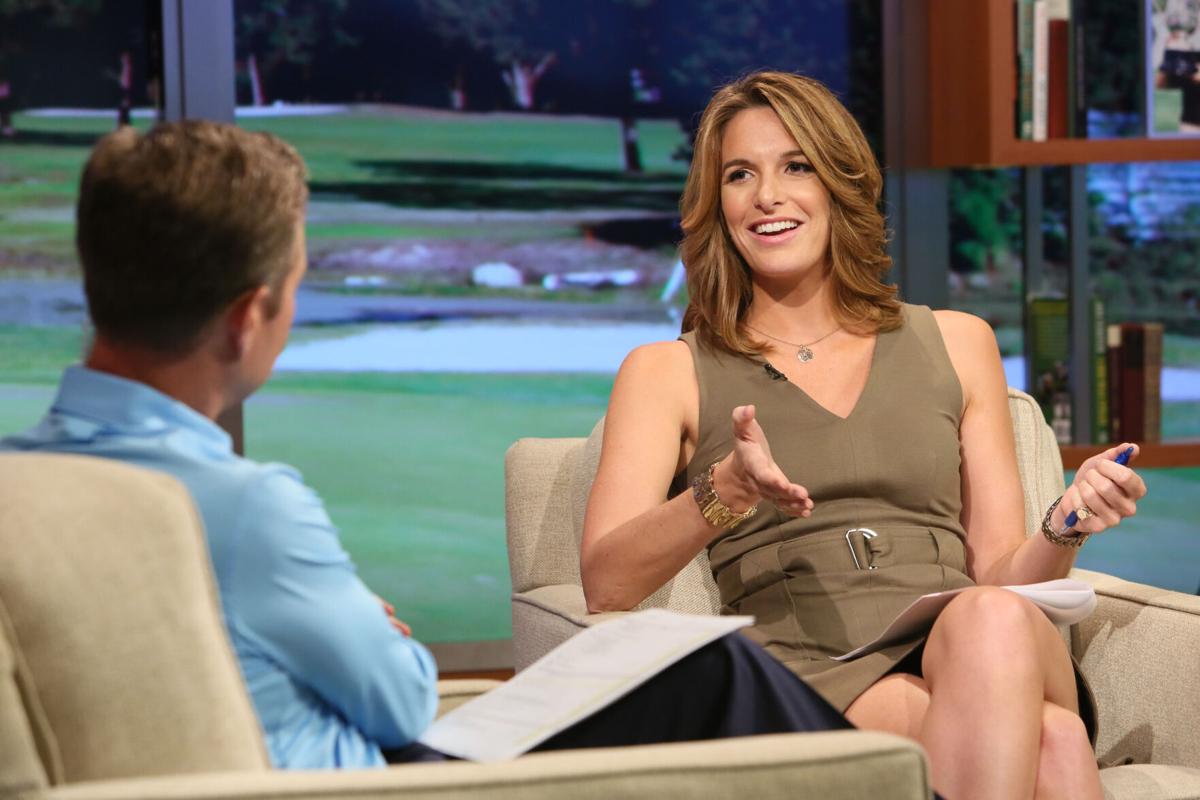 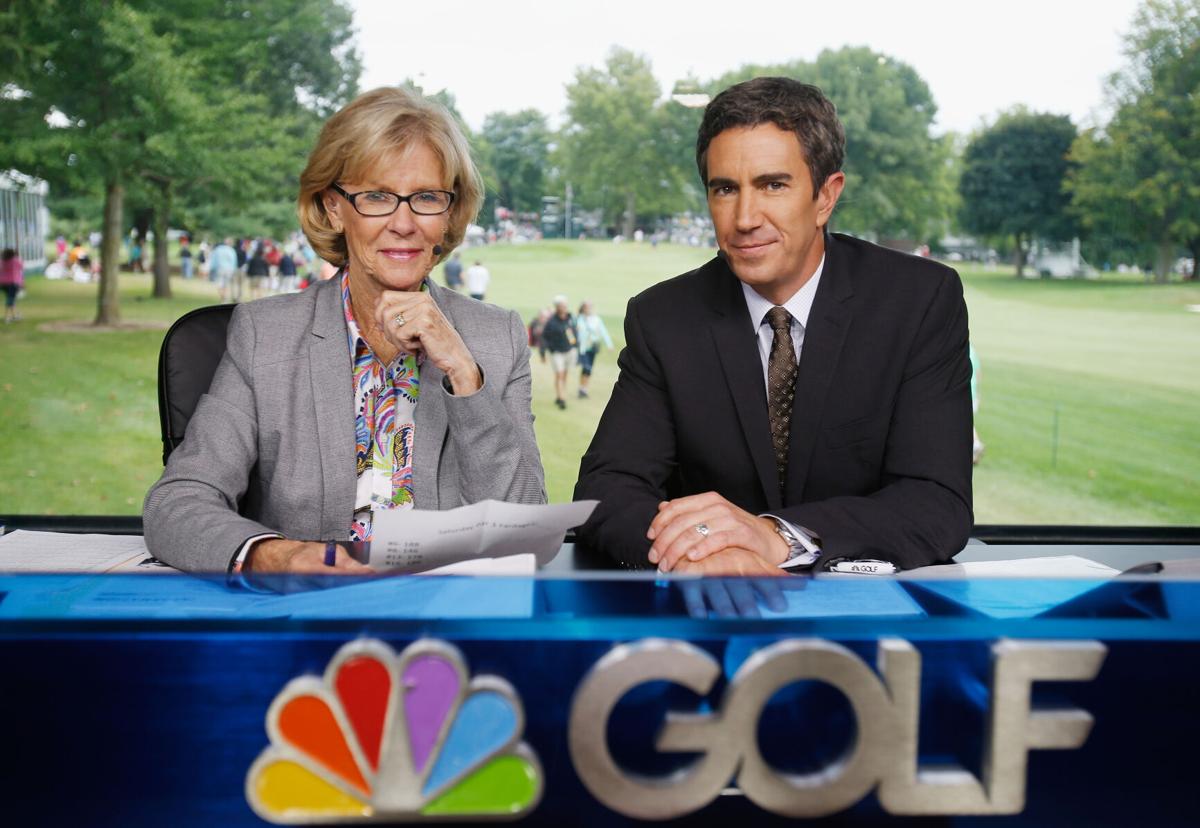 Judy Rankin, left, will be the analyst at the ShopRite LPGA Classic. Here she works with Terry Gannon during the third round of the Wegmans LPGA Championship in 2014. 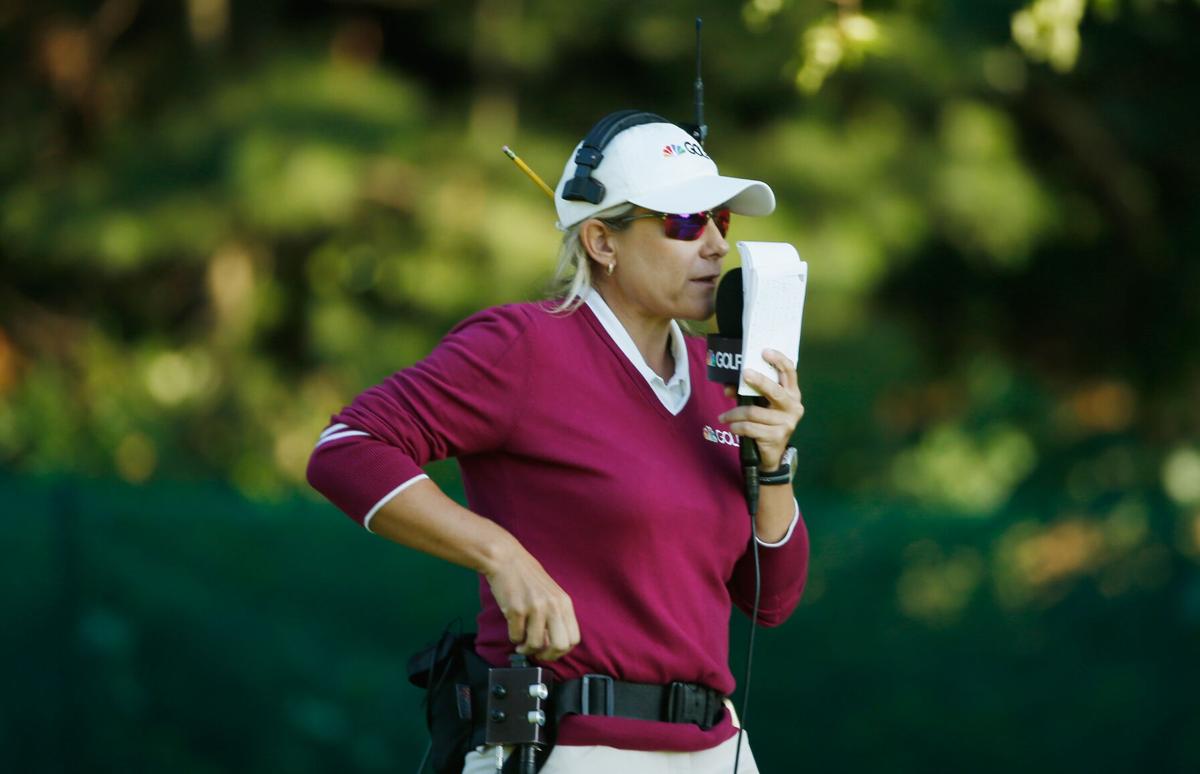 Karen Stupples reports for Golf Channel during the final round of the Wegmans LPGA Championship in 2014. 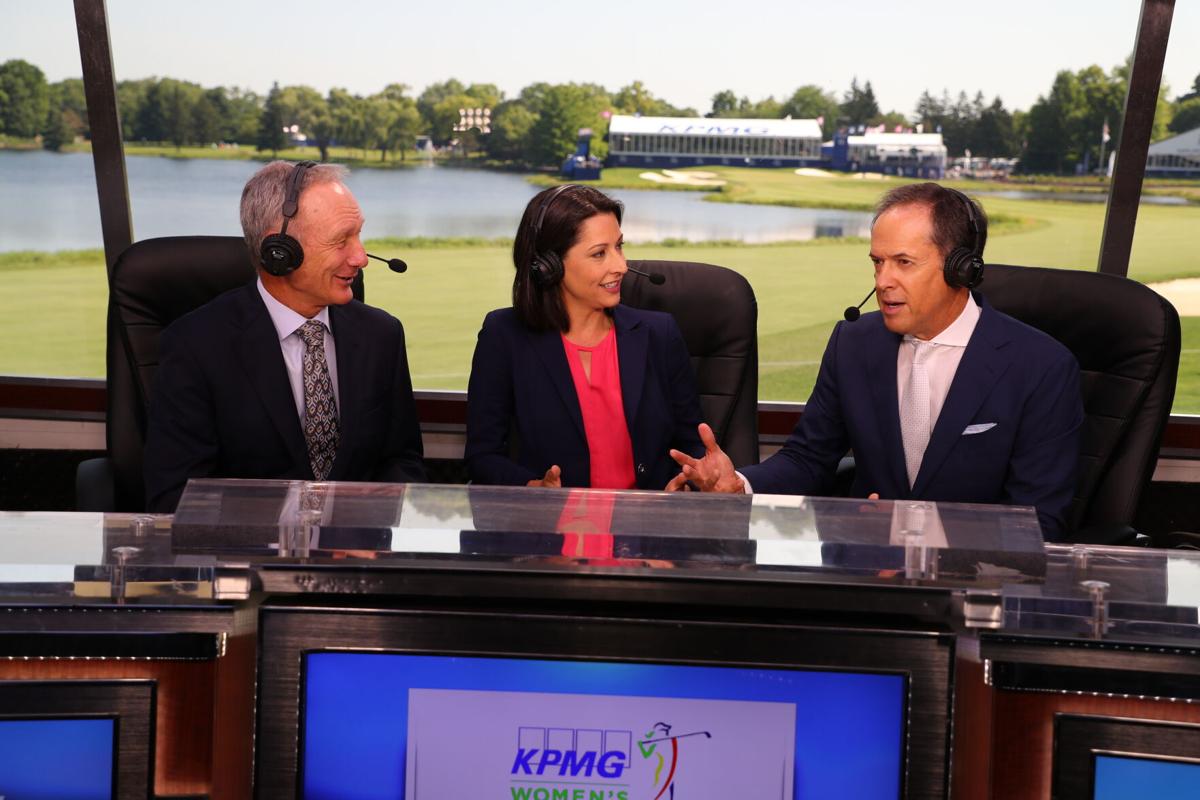 GALLOWAY TOWNSHIP — The ShopRite LPGA Classic will be a part of television history this week.

The tournament will be the first U.S. golf telecast to feature an all-female announcing team.

The $1.75 million Classic will be played Friday-Sunday on the Bay Course at Seaview Hotel and Golf Club. The tournament will be shown on the Golf Channel from 1-4 p.m. each day.

Cara Banks will host the telecast with LPGA Hall of Famer Judy Rankin as the analyst. Paige Mackenzie will call holes, and Karen Stupples and Kay Cockerill are the on-course reporters.

“I think this has been a long time coming,” Banks said. “We have such great talent. I’m pumped. I can’t wait to grab this (opportunity) with both hands and do a good job. We’ll see how the week goes and hopefully we’ll have some more.”

The Classic, which began in 1986, is always one of the most anticipated events on the South Jersey sports calendar, this year even more so because fans will be back. There were no crowds last year because of the pandemic. The two-day Classic pro-am on Wednesday and Thursday also returns after a year’s absence because of the virus.

Although the LPGA does not announce exact attendance of its tournaments, the Classic draws well. The crowds make for eye-catching TV images.

Few local events in sports or entertainment bring more publicity and have more an economic impact on the greater Atlantic City area.

In 2016, the event brought in $19.2 million of new economic activity and 56,425 out-of-town visitors, according to a Lloyd D. Levenson Institute of Gaming, Hospitality and Tourism at Stockton University report.

Shots of the Atlantic City Boardwalk and beaches are often featured on the Golf Channel’s national television coverage.

TV, media and internet coverage of the tournament is worth millions of dollars, officials have said.

The fact that this year’s tournament will feature an all-female announcing crew brings the Classic even more positive media coverage and helps the tournament stand out in what is a crowded sports calendar this upcoming weekend with high school football, the NFL and the end of the baseball regular season.

Banks is new to her role as host, but she has plenty of golf television experience as an interviewer and announcer.

“I can’t wait,” she said. “I feel ready to step in the booth and try a different part of the golf production world.”

In addition to a playing career that saw her win 26 LPGA events, Rankin has been an accomplished TV analyst for nearly 40 years.

“I feel like I’m in safe hands, Banks said. “I couldn’t ask to sit next to someone better or with more experience.”

Banks said as part of her role she will ask questions that home viewers want to know.

“It’s so easy to overcomplicate it,” she said. “On TV, everyone is seeing what you’re seeing. A lot of (my role) is being a traffic cop, keeping the ball going.”

The Classic has raised more than $35 million for charity since ShopRite became the presenting sponsor in 1992.

The all-female announce crew is another way ShopRite can make a difference.

“We are thrilled to break ground at the ShopRite LPGA Classic with the first all-female golf broadcast team,” Classic director Bill Hansen said.

Hansen noted that several LPGA standouts, including 2019 ShopRite winner Lexi Thompson, have made their pro debuts at the Classic.

“We are no strangers to being the first at this event,” Hansen said. “The media coverage of our all-female broadcast team announcement has been incredible, and we’re hopeful it will lead to more people watching either in-person or on the Golf Channel.”

The Classic broadcast comes at a time when women announcers are becoming more and more common and breaking new ground. The Philadelphia 76ers announced last week that Kate Scott will be the team’s play-by-play announcer this season.

Reid said the Classic broadcast shows that golf is also moving in the right direction.

“I feel like golf has been slightly behind in that,” she said. “To see it progressing over let’s say the last year or so has been pretty amazing to watch, and something that I’m pretty proud of is. There is a little more equality going on. As someone like myself who fights for that, I think it’s really cool to see.”

Work set for Oct. 16 on Pitney Road in Galloway

GALLOWAY TOWNSHIP — A full detour will be in effect from 6 a.m. to 4 p.m. Oct. 16 on Pitney Road between Jimmie Leeds Road and Ridgewood Avenu…

ShopRite to pay $1 a year for Atlantic City location

ATLANTIC CITY — Village Supermarket Inc. will pay $1 a year to operate a ShopRite in Atlantic City, staff members with the Casino Reinvestment…

ATLANTIC CITY — A proposed ShopRite supermarket on Baltic Avenue is a step closer to reality.

What to know about this week's ShopRite LPGA Classic

The ShopRite LPGA Classic is back at the Seaview Bay Course through Oct. 3. Below is what you need to know about the event.

Mel Reid takes her tee shot on the first hole at Seaview Golf Club last year during the third round of the ShopRite LPGA Classic in Galloway Township.

The ShopRite LPGA Classic will feature for the first time an all-female broadcast team on the Golf Channel. Clockwise from left top, Cara Banks will host the telecast, along with on-course reporters Kay Cockerill and Karen Stupples, and Paige Mackenzie will call holes. Bottom left, LPGA Hall of Famer Judy Rankin will be the analyst.

Judy Rankin, left, will be the analyst at the ShopRite LPGA Classic. Here she works with Terry Gannon during the third round of the Wegmans LPGA Championship in 2014.

Karen Stupples reports for Golf Channel during the final round of the Wegmans LPGA Championship in 2014.