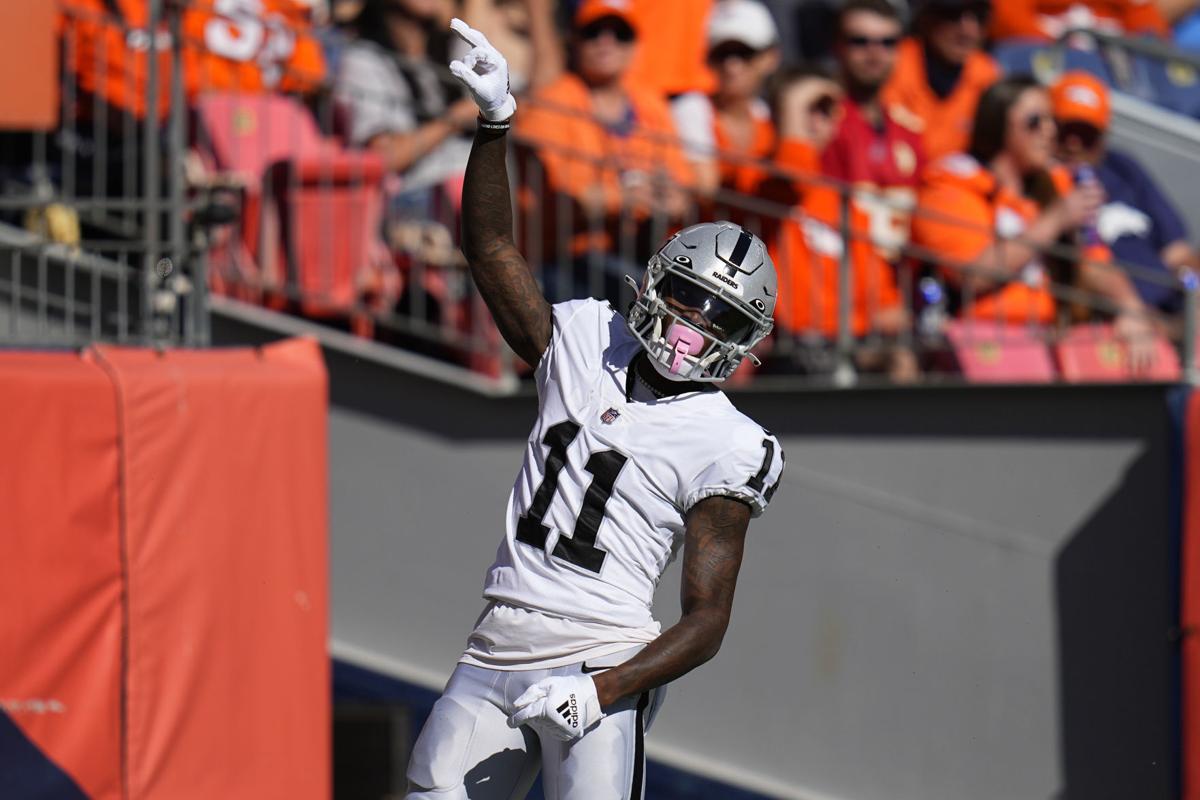 The Las Vegas Raiders’ Henry Ruggs III in action against the Broncos in Denver during their Week 6 game. The second-year receiver had three catches for 97 yards and one TD in a 34-24 victory.

The Philadelphia Eagles will play Sunday on the road against the Las Vegas Raiders.

Here are the game predictions from the Eagles beat writers for Week 7.

Jeff McLaneThe 2-4 Eagles aren’t as bad as their record suggests, or even as bad as they have looked at times. I truly believe that. The stat nerds do, as well. Football Outsiders have the Eagles ranked 18th, according to their defense-adjusted value over average (DVOA) system. Pro Football Focus has them 16th, according to the nebulous numbers system they use. I just use my eyes and look at their schedule through six games (13th-hardest, per FO) and their remaining schedule (30th easiest) and think it’s got to get better for the Birds.

Of course, you are what your record says you are, according to renowned non-football nerd Bill Parcells, and there has been plenty of ugliness to support this notion as it relates to the Eagles. I don’t mean to suggest that Howie Roseman has constructed a playoff-worthy roster, but Nick Sirianni and his coaching staff’s relative lack of experience has contributed to the early malaise. I expect there to be improvement, and if there isn’t tangible improvement by the end of the season, then changes will be made. But the schedule does get easier.

The Raiders don’t necessarily qualify. They’re 4-2, of course, and have a quality starting quarterback in Derek Carr and pieces on both sides of the ball worth worrying about. They beat the divisional-rival Broncos despite the Jon Gruden neutron bomb that was laid at their feet last week. But they’re not necessarily a team to fear. Their defense is a lot like the Eagles: a soft-zone playing unit that has been inefficient in the red zone. The same could be said of their pass-heavy offense that has struggled to get running back Josh Jacobs going.

All that being said, the Eagles in Las Vegas are hard to gamble on (get it?). I think Sirianni and defensive coordinator Jonathan Gannon took their medicine during the mini-bye and will make minor changes to the offense (traditional run calls!) and the defense (aggression!). But they can’t do much in terms of personnel and they’re just going to have to bite the bullet at certain positions. I see a relatively close game, and possibly a road upset, but all bets are off if the Eagles get off to another sluggish start.

EJ SmithThe next two weeks will be extremely telling about what this season will be. Even if the Eagles split the next two games, there’s reason to believe they can right the ship headed into a much easier part of the schedule. If they continue to spiral against the Las Vegas Raiders this Sunday and the Detroit Lions the following weekend, things could get ugly.

Any notion that the Raiders would be reeling after their head coach Jon Gruden was fired for racist, homophobic and misogynistic emails were dispelled by a convincing 34-24 win against the Denver Broncos. Derek Carr had arguably his best game of the season, and second-year receiver Henry Ruggs flashed his big-play ability with interim coach Rich Bisaccia at the helm.

Still, there’s reason to believe the Eagles defense could put together an encouraging performance. Defensive coordinator Jonathan Gannon spent the extended time off after playing the Tampa Bay Buccaneers last Thursday night self-scouting and presumably has some schematic adjustments coming. It’s also worth mentioning that the defense’s weaknesses have been amplified by elite quarterbacks and offenses, but the group has looked better against lesser competition.

The Raiders rank 22nd in defense-adjusted value over average, which puts them closer to the 25th-ranked Panthers than the Bucs, Chiefs, or Cowboys, who are all in the top 5.

Can the Eagles offense hold up its end of the bargain, though? It has looked listless on several occasions this season, and the prolonged droughts have cost the team games. It’s possible Nick Sirianni used his weekend off to fix what ails the group, but it’s too hard to bet on things turning around so quickly, even if the defense keeps the team in the game.

Josh TolentinoNick Sirianni admittedly spent the long weekend thinking about some of his growing pains as a rookie head coach. He also said he watched a ton of football, which sparked different group conversations among his assistants. Now, how do all of those observations factor into bettering his own group?

After much self-analysis, Sirianni might finally be on the verge of switching some things up offensively. The Eagles desperately need to incorporate the run game at a higher rate and feature tailbacks Miles Sanders and Kenneth Gainwell into their weekly game planning. This thought process isn’t simply to even out the pass-run ratio, but rather to alleviate pressure from Jalen Hurts, who has accounted for more than 85% of the team’s offense. That’s a much higher percentage compared to the rest of the league’s quarterbacks. The offensive line could regain right tackle Lane Johnson, which would be a big boost to the unit and allow Jordan Mailata to return to his regular role at left tackle.

In regards to the Raiders, they went through one of the most dramatic weeks in NFL history last week and still came out victorious in a road game at Denver. The Eagles might keep it close, but at this point, Sirianni still has multiple questions hovering over him.

The line: Raiders by 3

The Las Vegas Raiders’ Henry Ruggs III in action against the Broncos in Denver during their Week 6 game. The second-year receiver had three catches for 97 yards and one TD in a 34-24 victory.