PHILADELPHIA — The drive from Bloomington, Minn., to Fargo, N.D., on the morning of Jan. 30, 2018, five days before the Eagles’ victory in Super Bowl LII, was 3 hours and 45 minutes of earth tones and silence, of the occasional farmhouse amid vast farmland, of a sky without even a bird to puncture the endless gray.

During a walk around town, the cold and wind would stop you in your tracks, cutting through layers of shirt and sweater and ski jacket straight to your skin. For the quarterback who had been the NFL’s best player for most of that season to have come out of that region was a source of unfathomable pride to the people there, because, as one of them said, “There’s nothing else here.” It didn’t matter that Carson Wentz wasn’t going to play a snap in that Super Bowl. He had been a god at North Dakota State, and he was still a god in that part of the country, and he would remain one.

Set against that vista, the arc of Wentz’s career with the Eagles, particularly the strange manner in which it has ended, with a trade to the Indianapolis Colts for a third-round draft pick and a conditional second-round pick, makes more sense than it otherwise might at first. It would be simpler and easier to account for Wentz’s departure if he had been a bust from the beginning, if Wentz had shown that the Eagles’ decision to trade up twice in the 2016 draft and select him with the second overall pick was ludicrous from the start. But it wasn’t. Wentz followed a promising if uneven rookie season with those 13 marvelous, MVP-level games in 2017 and with two statistically excellent seasons — the second of which included his carrying an offense full of castoffs and rookies to a four-game winning streak and a division title. If you say that you saw his awful 2020 coming or that he was never any good to begin with, either you weren’t watching Wentz play, or you’re a liar.

But the reasons that the Eagles are trading Wentz, that they had to trade Wentz, run deeper than his one lousy season. They have to run deeper, because in and of itself, a quarterback having one lousy season usually isn’t and shouldn’t be cause for an NFL franchise to cast him out, especially less than two years after that franchise has committed four years and as much as $128 million to the proposition that it must have that quarterback, and no other, as its starter.

The Eagles bear no small amount of blame for this fiasco. When it comes to the football team he owns, Jeffrey Lurie loves nothing more than having a quarterback who presents an appealing public image, who drives merchandise and ticket sales, and who can win games. And the only conclusion one can draw now, in the wake of this wreckage, is that he, Howie Roseman, and the rest of the organization looked at Wentz and saw too much of what they wanted to see and not enough of what was actually there. They failed in their evaluation of him, failed to take a full measure of him as a quarterback and a person, failed to understand what conditions were required for him to thrive and be content. But it’s also fair to ask: What kind of conditions and environment would have been best for Wentz? And was it possible for the Eagles to create them?

That’s why the context of Wentz’s past — his rapid rise at North Dakota State and its effect on his thinking, his opinion of and expectations for himself — matters so much. One example: The week of Super Bowl LII, it took merely a matter of hours to arrange a phone interview with North Dakota governor Doug Purgum, to give him a chance to brag about Wentz and describe the state’s reaction when, in that infamous game against the Rams at the Coliseum in Los Angeles, Wentz tore two ligaments in his left knee. “Everyone held their breath,” Burgum said, “and then there was shock and hurt and disbelief.” Was there more pressing business for the governor to attend to? Perhaps, but not so pressing that he couldn’t answer a question or two about his local hero. Carson came first.

Through Wentz’s first four years with them, the Eagles did nothing to discourage Wentz himself from thinking that way, from believing that he was their golden child, that it was merely a matter of time before he extended his legend beyond the Great Plains. Carson came first. Good Lord: The Eagles won the Super Bowl and nearly reached a second NFL Championship Game with another quarterback, and they never hesitated to reaffirm that Wentz was their real meal ticket. They let Nick Foles depart, then signed Wentz to that gargantuan extension. There’s a thin line between supporting a star athlete and reinforcing that athlete’s sense of self-regard and entitlement, and it appears that the Eagles, based on where that line fell on Wentz, crossed it. They treated him as every NFL team treats its franchise quarterback ... until the moment they drafted Jalen Hurts. Until, for once, Carson didn’t come first.

As arrogant as the Hurts pick was — the logic behind it was sound, but the logic was sound in a vacuum, and the Eagles did not exist in that vacuum — it seems a strange thing to ignite the total disintegration of the relationship between Wentz and the franchise. Should the Eagles have drafted someone other than a backup quarterback in the second-round? Yes. Their roster wasn’t deep enough and talented enough that they could use so valuable a resource on a luxury item. But it’s reasonable to have expected Wentz to shrug it off, get over it, and go play. Apparently, he couldn’t.

The Eagles had presumed Carson Wentz was made for Philadelphia, for the most demanding and difficult market in professional sports, but growing up in cold weather, wearing flannel and Levi’s, and hunting down your own dinner aren’t necessarily indicators of how you’ll react the first time things don’t go your way. When you’ve been admired and loved so much, how do you act when you’re not anymore? Maybe you act the way that Carson Wentz has. You expect the love to be unconditional and never-ending, and when you realize it isn’t, you’re shocked, and you decide it’s time to leave, and you force your way out. You continue your search for a kind of adoration that you can find only in a place where there’s nothing else but you.

Looking ahead to the 2021 NFL season: Everything you need to know

Even Howie and Jeffrey couldn’t screw this up.

Carolina Panthers’ quarterback Sam Darnold spoke to the media during a zoom press conference after being traded from the Jets for a 2021 sixth-round pick and 2022 second- and fourth-round picks.

Andrew Berry has been relentless in chasing down certain edge defenders.

Clemson quarterback Trevor Lawrence is a generational talent and the best player in this NFL draft.

CLEVELAND — The Browns appear to be closing in on Jadeveon Clowney.

For the last five years, Joe Fortunato has traveled across the country to showcase his skills.

Mainland Regional High School graduate Joe Fortunato is getting another shot at the NFL.

Players’ legacies would be much easier to properly appreciate if people didn’t rush to anoint them as Hall of Famers the second they retired. 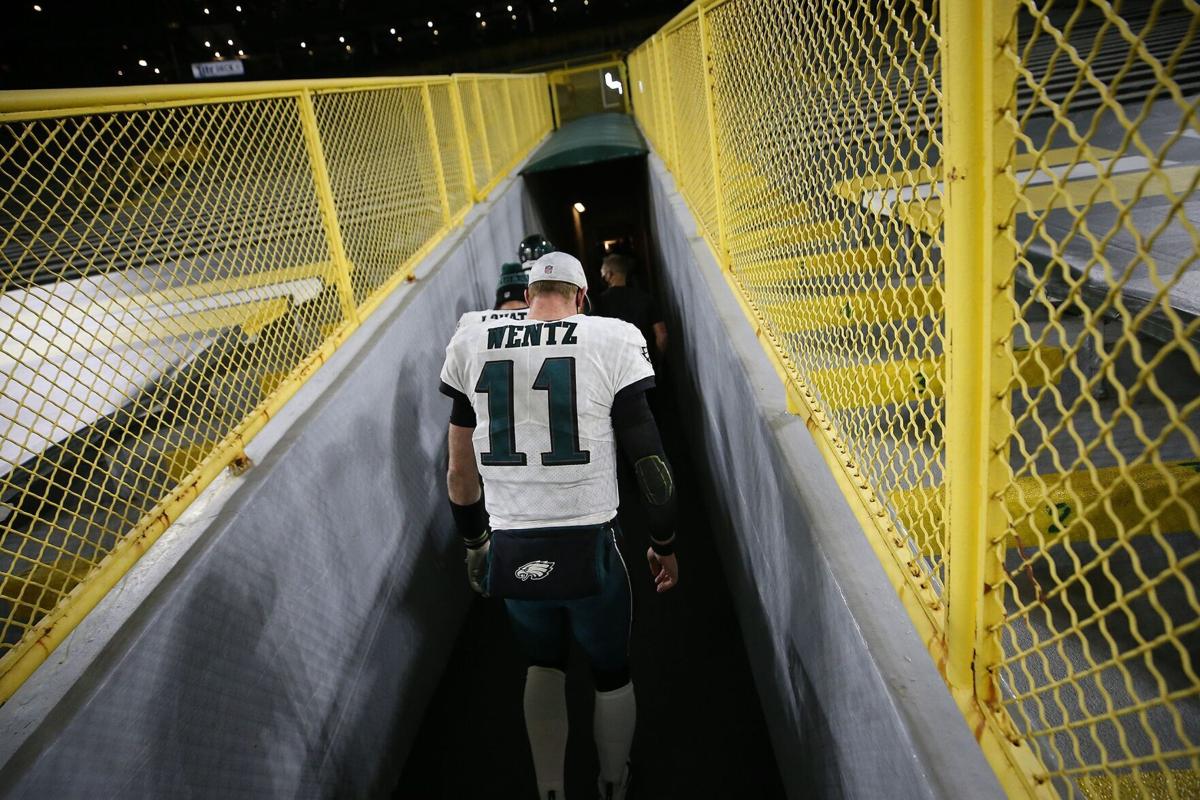 The Eagles made a big bet that Carson Wentz would be their franchise quarterback for years to come. This trade reflects their failure, and his. 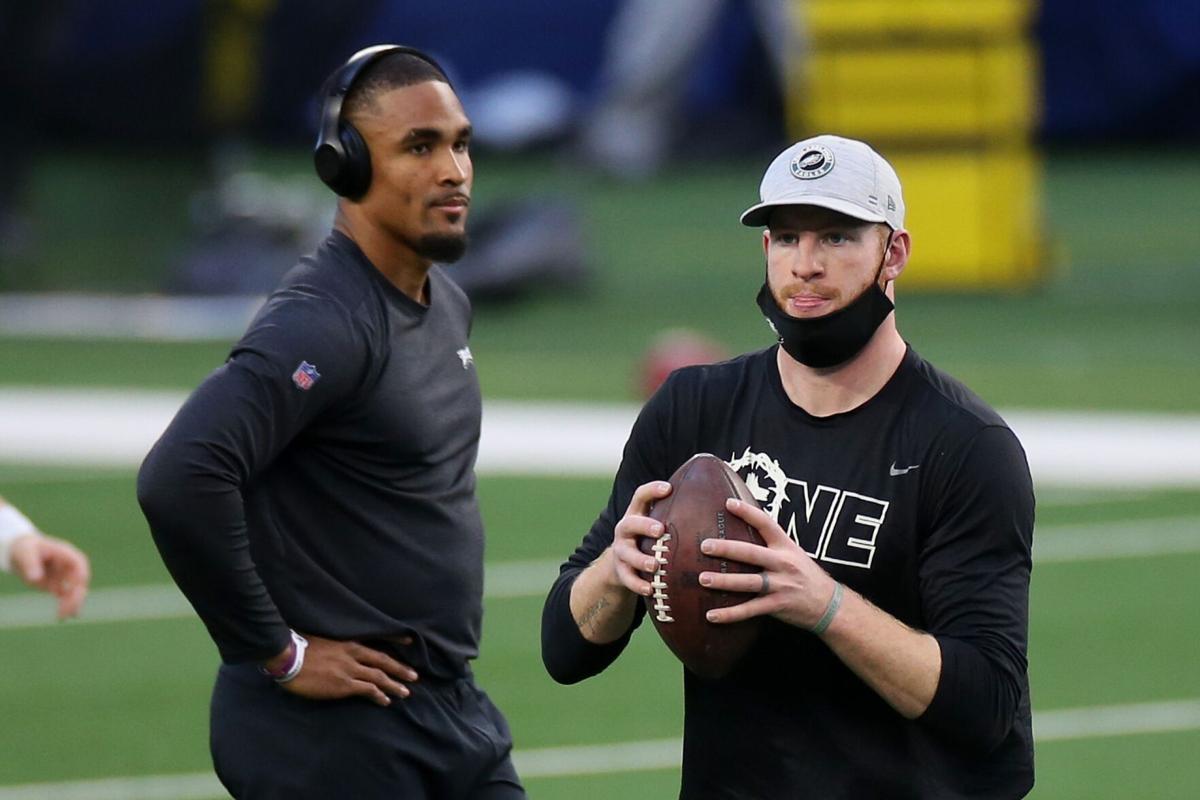 Eagles quarterbacks Jalen Hurts (left) and Carson Wentz warm up before a game against the Dallas Cowboys in December. 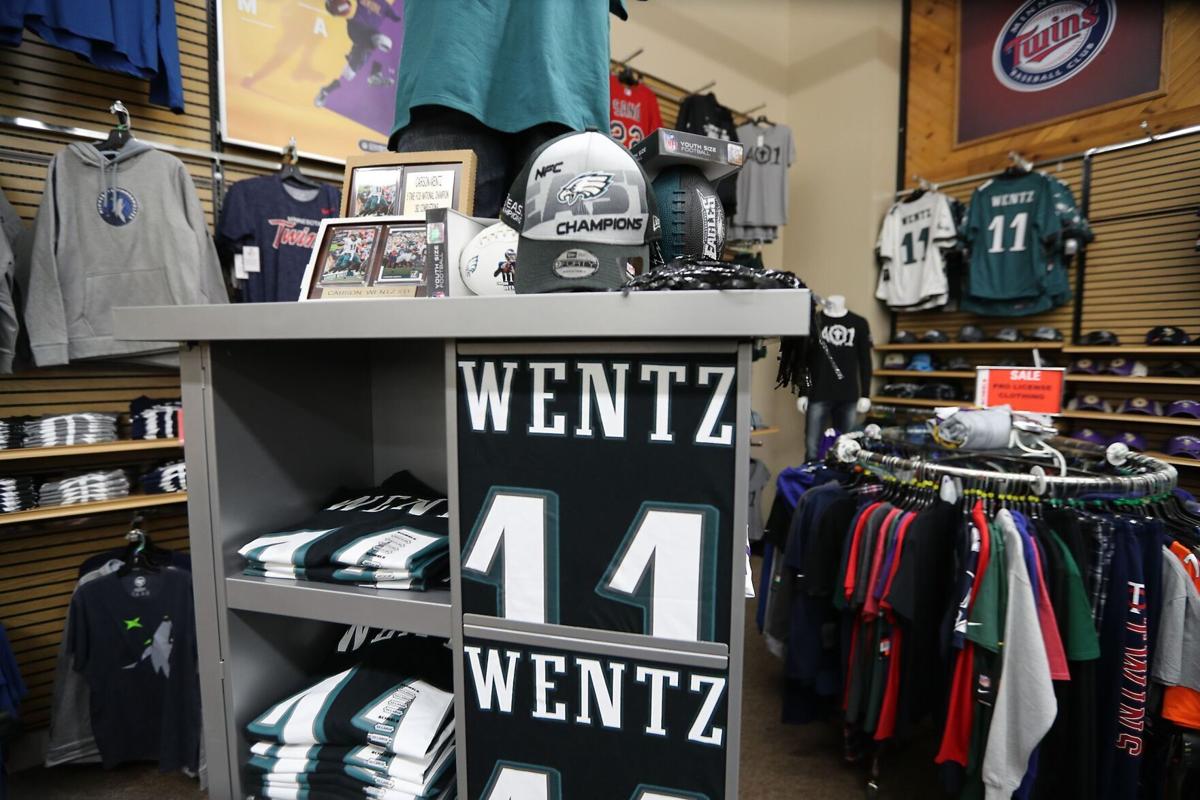 Carson Wentz jerseys and gear were available at a Fargo sporting goods store during the week ahead of Super Bowl LII.