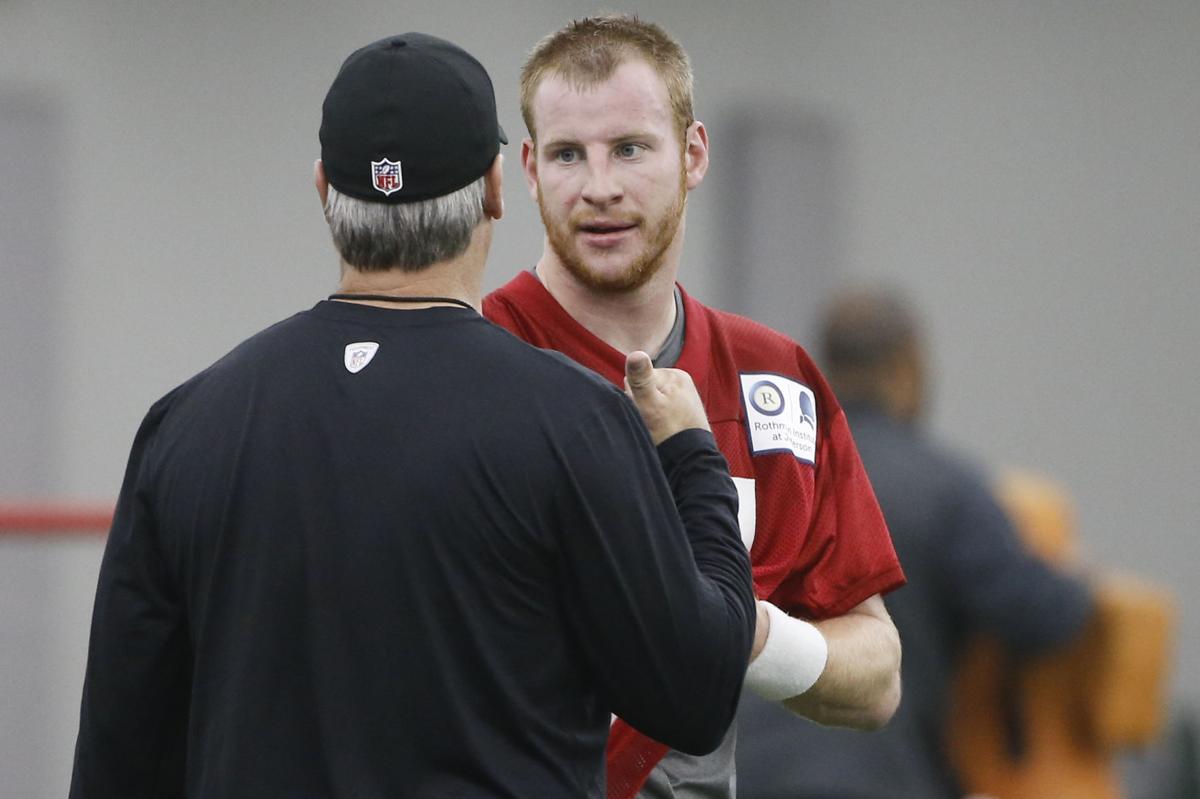 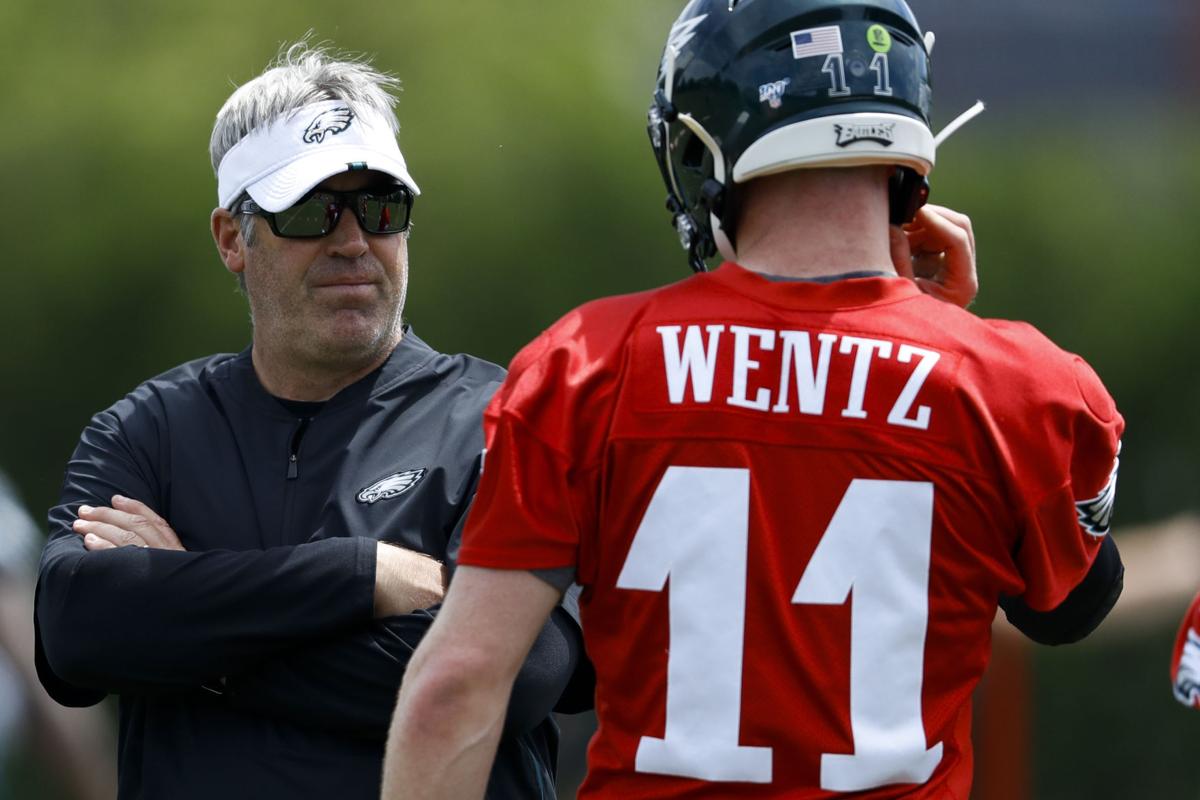 Carson Wentz will hire the next Philadelphia Eagles coach. It makes sense. After all, he fired the last one.

Jeffrey Lurie made this plain Monday, when he ushered Pederson out the door and patted him on the back with a hand wearing the only Super Bowl ring Lurie’s ever owned. Then again, considering Pederson won him that ring and not Wentz, maybe that hand performed more of a stabbing motion.

To be fair, Lurie had little choice. Five years ago he and general manager Howie Roseman tied his team to Pederson for three years, but he tied his team to Wentz for a decade; first, by mortgaging the future to trade up and acquire him with the No. 2 pick, then by mortgaging the future with a $128 million extension after the 2018 season, even after Wentz missed five games that season with knee and back injuries.

They had invested too many assets not to. They now have invested too much of themselves, their egos and their salary cap to admit they were wrong. Twice.

Since April 28, 2016, the Eagles have been about Carson Wentz. Hiring a new coach without Wentz’s endorsement makes as much sense as having a filmmaker involved in football decisions.

But Wentz’s value didn’t diminish for Lurie even after Wentz got benched for good in Game 12 in a season in which he led the league in turnovers and ranked second-to-last in passer rating. That the benching ruined the coach-QB relationship speaks ever more poorly about Wentz’s continual character questions, but Lurie and his general manager, Howie Roseman, believe they had no choice but to choose the spoiled player over the ingenious coach.

“Carson, to us, to me, and to I think virtually everybody in our organization, is a quarterback that his first four years was in many ways elite and comparable to some of the great quarterbacks’ first four years in the league,” Lurie said, ignoring Wentz’s accuracy and injury issues. “The way I look at it is, we have an asset and we have a talent.”

Wentz was a Rookie of the Year candidate in 2016 and an MVP favorite in 2017 before injuring his knee in Game 13. Never underestimate the power of an “asset” in Philadelphia, no matter how limited their skills. Lurie trusts that process more than he values a proven coach.

“It behooves us as a team with a new coach, a new coaching staff, to be able to really get him back to that elite (level of) progression,” Lurie said.

As such, expect Wentz to help determine who’s doing the helping.

Firing Pederson and his lieutenants might indeed benefit the Eagles, both in this moment and in years to come, but understand the devilish deal Lurie has made.

He cast out a coach with a winning record, three playoff trips and two NFC East titles. He canned a coach that won four playoff games, including the Super Bowl, all with a backup quarterback that couldn’t win a starting job for the Rams, Jaguars or Bears.

That includes rookie Jalen Hurts, who, in his first start, beat the Saints, the NFC’s top team and top defense, then played intriguing football the rest of the season. Against that backdrop Wentz twice floated reports through ESPN that he did not want to return to the Eagles in 2021 if he wasn’t guaranteed the starting job. Then, after the season ended, Wentz let the Associated Press know that he refused to attend exit interviews. He literally couldn’t stand to look Pederson in the face.

Clearly, in his meetings with Lurie last Tuesday and this Monday, Pederson declined to guarantee that Wentz was his QB1; in fact, an NFL source familiar with the team said Pederson was not averse to trading Wentz. Lurie essentially had no choice but to fire Pederson. Lurie realizes he looks ridiculous, and he admitted as much.

“Very few people, after success, deserve to lose their job. This is much more about the evaluation of whether the Eagles moving forward — our best option is to have a new coach, and that’s really, really what it’s about,” Lurie said. “It’s not about, ‘Did Doug deserve to be let go?’ No, he did not deserve to be let go.”

Lurie then rambled on about the need to “retrench and rededicate” by infusing youth, but that was all just word salad. Unless he’s going to trade veterans Lane Johnson, Brandon Brooks, Fletcher Cox and Darius Slay, four expensive Pro Bowl players who are at least 30 years old, Lurie will seek to win immediately with Wentz, who will be 29 at the end of next season. You don’t retrench with old guys due hundreds of millions of dollars.

It wasn’t vague, divergent visions of the future that fractured the unholy trinity of Lurie, Roseman, and Pederson. It was the fact that Lurie didn’t think Pederson could fix Wentz, mainly because Wentz doesn’t want to be fixed by Pederson, and because Wentz damn sure doesn’t want to be fixed by quarterbacks coach Press Taylor, whom Pederson wanted to promote to offensive coordinator.

“We had a poor season from Carson in terms of what he’s been able to show in the past,” Lurie said. “Very fixable. I fully expect him to realize his potential.”

Honestly, there’s little proof that either Pederson or Taylor could fix Wentz. He played well enough in 2018 and 2019, but his progress stalled after coordinator Frank Reich and quarterbacks coach John DeFilippo left for better jobs after 2017. Then again, we might have already seen the extent of Wentz’s potential.

After all, Lurie once considered Kevin Kolb a franchise quarterback.The rest of the hue and cry surrounding Pederson’s departure is just noise. Lurie said he didn’t care abut TankGate, and the same excuses Lurie made for Roseman’s poor roster — a tidal wave of injuries, as-yet unrealized potential of disappointing young players, the short-term inconvenience of their salary-cap debacle — he could use to excuse Pederson’s 4-11-1 record. As usual, this is all about talented, tortured Carson James Wentz.

Lurie spent much of his video conference Monday trying rehabilitate Wentz’s tarnished image. Reports in 2018 and 2019 concerning Wentz’s stubbornness and aloofness both with teammates and coaches — reports Wentz verified — grew more concerning as Wentz dealt poorly with failure and demotion in 2020.

Listen, Lurie’s got a master’s degree in psychology and a PhD in social policy, so he’s an educated manipulator, and he’s selling you Carson Wentz.

“He’s a great guy,” Lurie insisted. “Tireless. He has his heart in the right place.”

No, Jeff, he has his hands in your wallet.

Lurie painted himself into this corner when he guaranteed Wentz a then-record $107 million for these next four seasons.

Lurie and Roseman locked themselves in this cell when they drafted Donovan McNabb years ago, convinced that the only Super Bowl-caliber quarterbacks in the NFL get drafted in the first hour of draft night.

Which pending free agents should the Eagles make an effort to keep?

It’s hard to say what sort of talent the Philadelphia Eagles might be able to bring in through free agency, given that the team currently is a…

Washington released AP Comeback Player of the Year Alex Smith on Friday, a move that was expected but still provides a cold ending to the vete…

Jets GM Joe Douglas and head coach Robert Saleh haven’t quite tipped their hand for their plans at quarterback yet, but those plans are becoming increasingly clear.

Tom Brady finally revealed what his wife, Gisele Bundchen, asked him when they embraced right after the Bucs won Super Bowl 55.

Jason Kelce will be back for Eagles under restructured contract; Darius Slay, too

PHILADELPHIA — Eagles general manager Howie Roseman is brandishing his chisel, with NFL teams needing to get under the 2021 salary cap by the …

There were some fans who were surprised and disappointed Monday when star defensive end J.J. Watt signed with the Cardinals.

Would it be a classy affair, with shrimp cocktail and cigars? The Weeknd’s promotional materials for the Pepsi Super Bowl Halftime Show in Tampa seemed to suggest indulgence, suits and leather driving gloves and Champagne on ice.

Mike Preston: Social media has changed the narrative for NFL players, and it is not good

National Football League head coaches are spending as much time monitoring their players on social media as they are drawing up and installing plays.