Philadelphia Eagles owner Jeffrey Lurie, shown before a December 2019 game, admitted earlier this week that the team is in ‘a real transition period’ and compared it to 2016 when the team traded up to the No. 2 pick to select quarterback Carson Wentz in the draft. 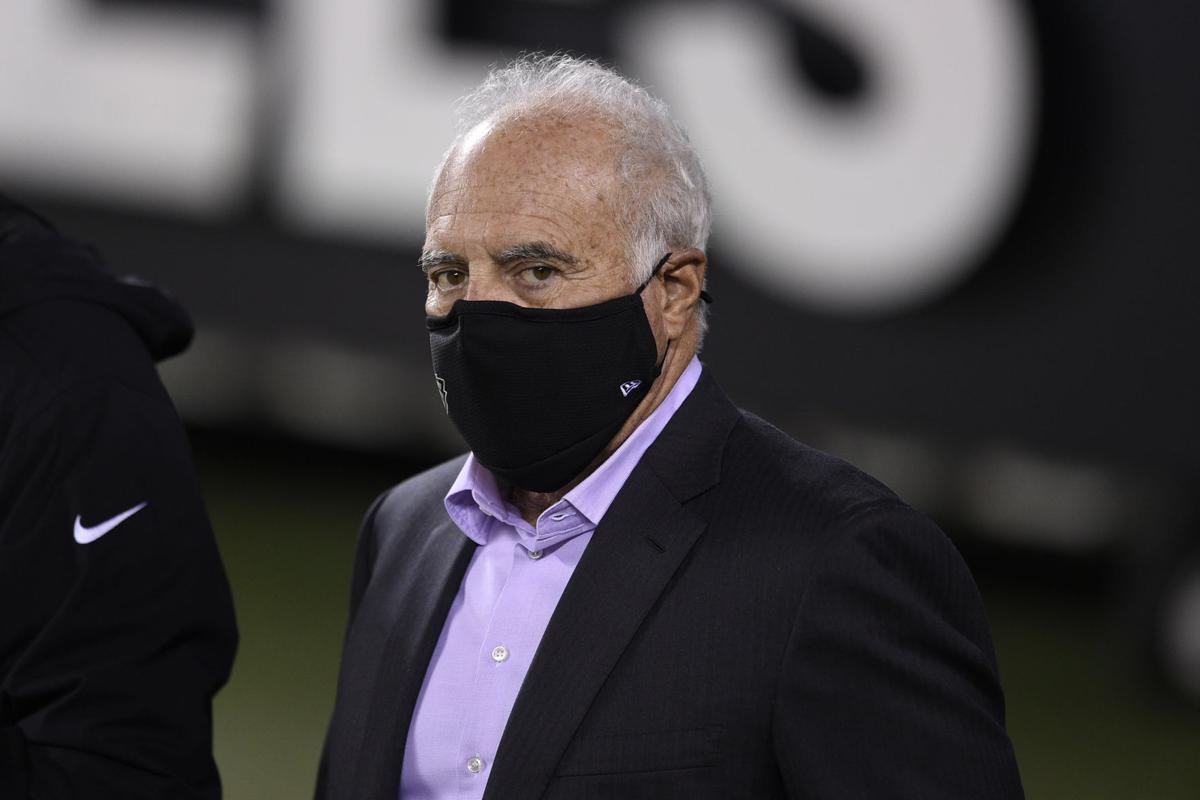 The Philadelphia Eagles had just won the Super Bowl in February 2018, and team owner Jeffrey Lurie, by his own account, had a message for defensive coordinator Jim Schwartz.

“Wow,” Lurie told him, “that was not a good defensive performance in that game.”

Sounds like Lurie is a great guy to work for. That’s how he acted in the aftermath of the best moment in franchise history. How is he going to act after one of the worst?

Everyone is about to find out.

Philadelphia currently appears adrift in the ocean. The reasons for that assessment are everywhere.

The firing of Pederson has had ramifications, such as the reports Thursday that offensive line coach Jeff Stoutland, though still under contract with the Eagles, could be headed to the University of Alabama.

Carson Wentz, whom the Eagles selected with the No. 2 pick in the 2016 draft and recently signed to a $128 million contract, was by practically every statistical measure the worst quarterback in football this season.

Jason Hurts, whom the Eagles inexplicably selected in the second round (53rd overall) of last May’s draft, doesn’t appear to be the answer at quarterback either.

The roster is filled with aging highly-paid players who have probably seen better days, such as center Jason Kelce, 33, and defensive tackle Fletcher Cox, 30.

“We’re in a real transition period, and it’s not unlike 2016,” Lurie said. “We have to retrench and rededicate and allocate resources to what can make us the best possible team in the mid-term, in the long term and hopefully compete in the short term because I think we can, but honestly, that’s really where we’re at.”

The very real question is, can Lurie and general manager Howie Roseman lead Philadelphia back to contention?

“In terms of every level of the football operation,” Lurie said, “I am really confident of where we’re at, and I don’t see any reason why we’re not going to return to preeminence with more mid-term and long-term decision-making.”

But for Eagles fans to see where they’re most likely headed, all they have to do is gaze up the New Jersey Turnpike to the New York Giants.

The Giants hired Ben McAdoo and Pat Shurmur as head coaches. Both were fired. Reese was fired toward the end of the 2017 season. The Giants have had plenty of high draft picks the past few years, but those haven’t guaranteed success.

The bottom line is, New York has had just one winning record and one playoff appearance in the five seasons since Coughlin was let go. This season’s 6-10 mark under first-year coach Joe Judge was seen as progress.

The lesson from New York is what Lurie talked about accomplishing after Pederson’s firing is a lot easier said than done.

Lately, the movie “Castaway” is making the rounds on cable. Eagles fans are like the character Tom Hanks plays.

It’s time for them to build a raft, and it’s time to head to the open seas. Fans should draw a face on a football and nickname it “Sudsy” after the Eagles’ beloved third-string quarterback Nate Sudfeld, so they have someone to ride the waves with and hope Lurie hires a head coach who can help the Eagles find land.

It’s going to be a long trip.

Lurie is relying on a current front office to fix a problem it helped create. History says that almost never works.

Philadelphia Eagles owner Jeffrey Lurie, shown before a December 2019 game, admitted earlier this week that the team is in ‘a real transition period’ and compared it to 2016 when the team traded up to the No. 2 pick to select quarterback Carson Wentz in the draft.