Boggs, a senior forward at Albright College, was named the Middle Atlantic Conference Commonwealth Player of the Week.

On Saturday, Boggs, a 2018 Mainland Regional High School graduate from Northfield, grabbed a single-game program-record 27 rebounds, scored 18 and added three assists, two blocks and two steals in a 52-31 win over Lebanon Valley. It was her 10th double-double of the season.

Kylee Watson (Mainland) scored two in Oregon’s 80-68 loss to Stanford. She scored four in an 88-53 win over California.

Shannon McCoy (Barnegat) had 23 points and eight rebounds in Kean’s 64-54 win over Stockton.

Kilie Wyers (Ocean City) had two points and three rebounds in Marywood’s 62-57 loss to Immaculata. She scored 14 and added four rebounds in a 69-53 loss to Marymount.

Jada Thompson (Hammonton) scored 19, grabbed 16 rebounds and added three steals and two assists in Ramapo’s 55-45 loss to Montclair State. On Monday, she was named the New Jersey Athletic Conference Rookie of the Week for the fourth time this season.

Jahlil White (Wildwood Catholic) scored a career-high 17 points and grabbed five rebounds in Temple’s 66-62 win over Central Florida. He had nine points, six rebounds and three assists in a 78-75 win over East Carolina. On Monday, he was named the American Athletic Conference Freshman of the Week.

Jake McGonigle (Wildwood Catholic) had seven points, six rebounds, two assists and two steals in Holy Family’s 55-45 win over University of the Sciences. He had six points and two rebounds in a 61-55 loss to Caldwell.

Juanye Colon (Atlantic City) scored 16 in District of Columbia’s 74-70 loss to Bridgeport. He had 20 points, five rebounds and four assists in an 85-82 loss to Roberts Wesleyan.

Collin Rolak (Lacey Township) won a 2-0 decision at 141 pounds for Wilkes in a 28-16 win over York at the Bud Whitehill Duals.

Rider’s Jabria Rozier (Cumberland Regional) was seventh in the high jump (1.50 meters) at the Wagner Invitational. Mariah Stephens (Egg Harbor Township) was second in the triple jump (11 meters), fourth in the long jump (5.34 meters) and sixth in the 60 hurdles (9.16).

Rutgers’ Claudine Smith (Atlantic City) was fourth in the 60 hurdles (8.81) at the Wagner Invitational.

Rider’s Leo Zaccaria (Cape May Tech) placed third in the mile (4:16.68) at the Wagner Invitational. 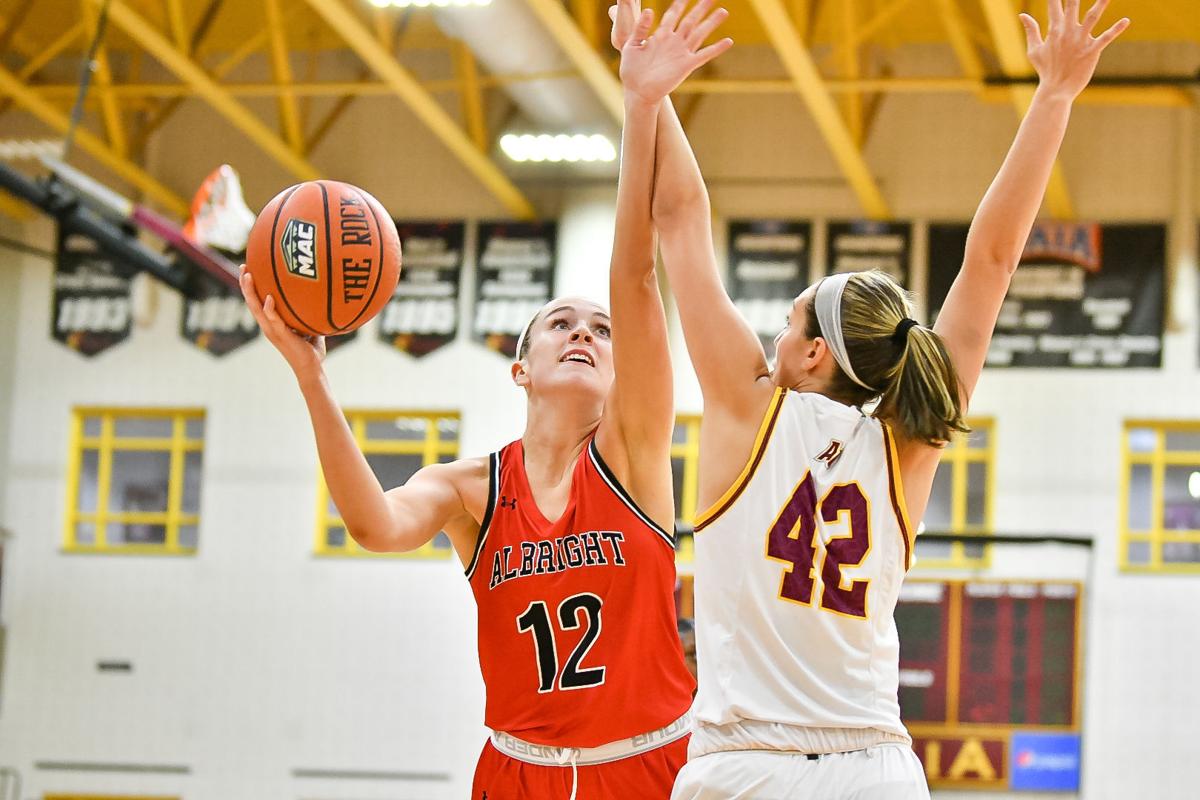 Senior forward Gabby Boggs looks to shoot for Albright College during a recent game. The Mainland Regional High School graduate set an Albright single-game record with 27 rebounds in a 52-31 win over Delaware Valley on Saturday. She also got her 10th double-double of the season.