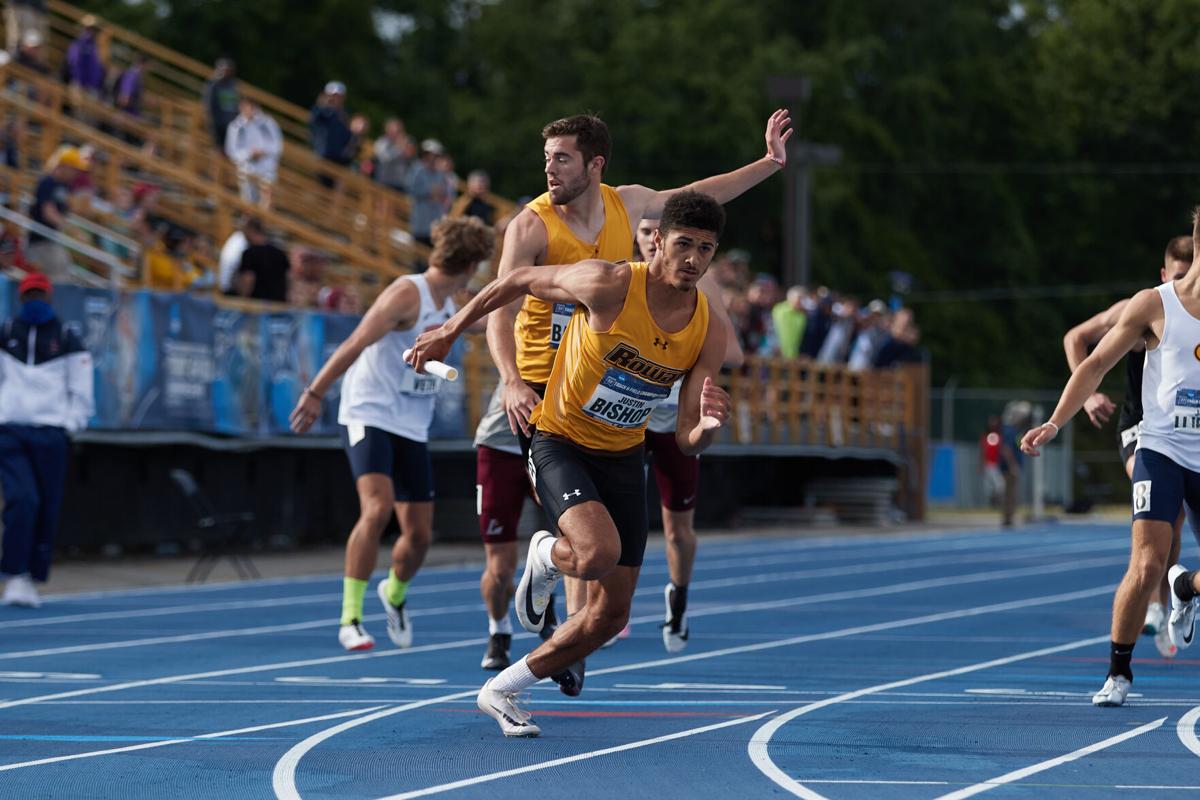 Rowan’s Hunter Barbieri (EHT) passes the baton to Justin Bishop (Mainland Regional) heading into the third leg of the 4x400 relay at the NCAA Division III Track & Field Championships at the Irwin Belk Track on the campus of North Carolina A&T University on May 29 in Greensboro, North Carolina.

Rowan was third heading into the final after running a 3:11.4 in prelims on Thursday. Amara Conte ran the opening leg, and the Profs were in fourth place when he passed the baton off to Barbieri.

Barbieri, a junior from EHT, maintained fourth but was passed more than halfway through the leg and had a slight stumble. He ran his 400 in 49.46 seconds.

Bishop, a senior from Egg Harbor City, turned on the jets in the third leg, getting Rowan into third place before the halfway point of his lap. By the time he passed the baton off to anchor Francis Terry, Bishop was in second and the Profs trailed by about a second. Bishop ran his leg in 47.912 seconds.

The transition to Terry was smooth, and Terry shot out to a fast start, never let up his pace and took the lead early in the final lap and cruised to the national title win. He ran a fast 46.83.

The win earned the Profs 10 points, helping them to a fourth-place overall team finish among 78 schools. It was crucial because the NCAA only awards trophies to the top four overall teams. Rowan’s other national championship performance belonged to Ahmir Johnson in the triple jump.

The relay also earned Bishop and Barbieri All-American status, their second time earning the honor in the outdoor season. Both did it with the 4x400 relay in 2018 that placed fifth. The relay team and Johnson also were the Profs’ first national champs during the outdoor season since Anthony Salemo in the 400 hurdles in 2017.

Gabriel Moronta (Pleasantville) was 20th in the 800 (1:51.19) for Mississippi State at the NCAA East Preliminary Championships in Jacksonville, Florida.

Kristin Siegle (Buena Regional) set a Rider record in the 1,500, finishing 31st in 4:22.45 at the East Preliminary Championships. Rutgers’ Claudine Smith (Atlantic City) recorded a personal-best leap of 12.58 meters in the triple jump to place 25th. Alexa Gardner (Hammonton) was 36th in the javelin (43.56m).

At the West Preliminary in Bryan-College Station, Texas, Brielle Smith (Oakcrest) was 33rd in the javelin (45.49) for Stanford.

Franki Morrell (Cedar Creek), a freshman, rowed on Lehigh’s second varsity eight that placed sixth in the grand final in 7:46.881 at the Patriot League Conference Championships on May 14 on the Cooper River in Camden.

Central Connecticut State junior catcher Rian Eigenmann (Millville) was named a Northeast Conference second-team all-star May 12. She hit .364 (44 for 121) with 13 doubles, a triple, six homers, 14 RBIs and 34 runs in 38 games.

Abigail Craige (Ocean City) is a member of Virginia Wesleyan, which advanced to the D-III championship series that was set to begin Monday, a best-of-three series vs. Texas Lutheran in Salem, Virginia.

Rowan’s Hunter Barbieri (EHT) passes the baton to Justin Bishop (Mainland Regional) heading into the third leg of the 4x400 relay at the NCAA Division III Track & Field Championships at the Irwin Belk Track on the campus of North Carolina A&T University on May 29 in Greensboro, North Carolina.