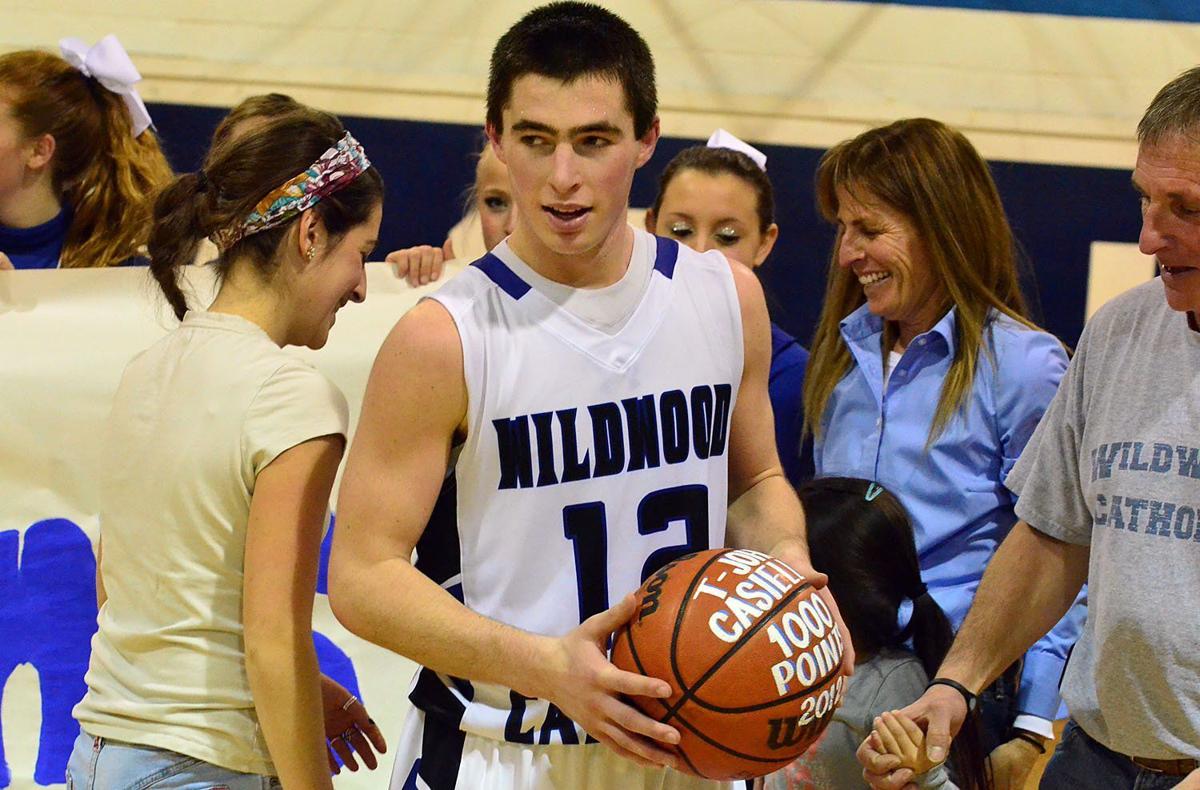 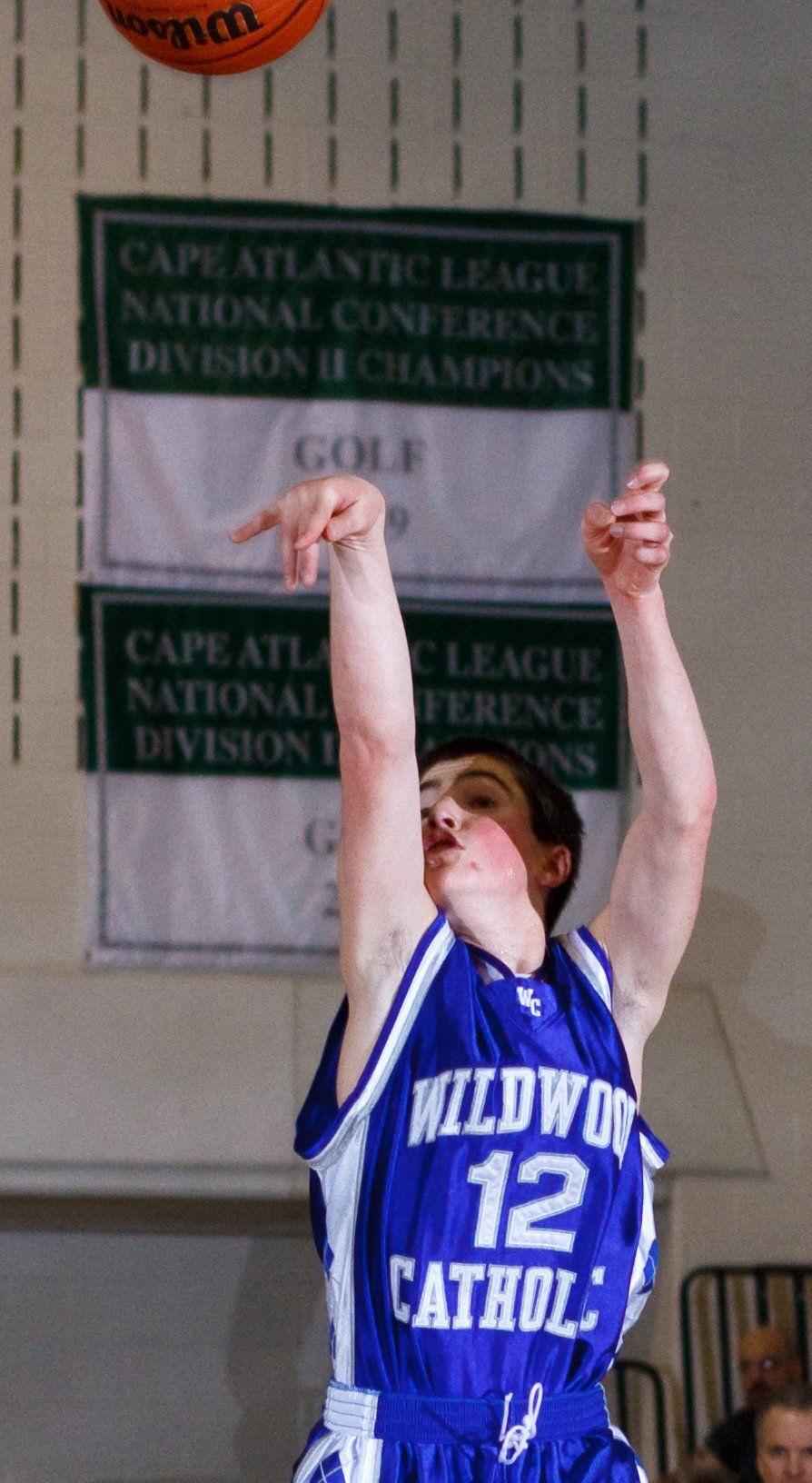 Wildwood Catholic's T-John Casiello (12) takes a three point shots during the game at Cape May Tech on Wednesday, Feb. 24, 2010 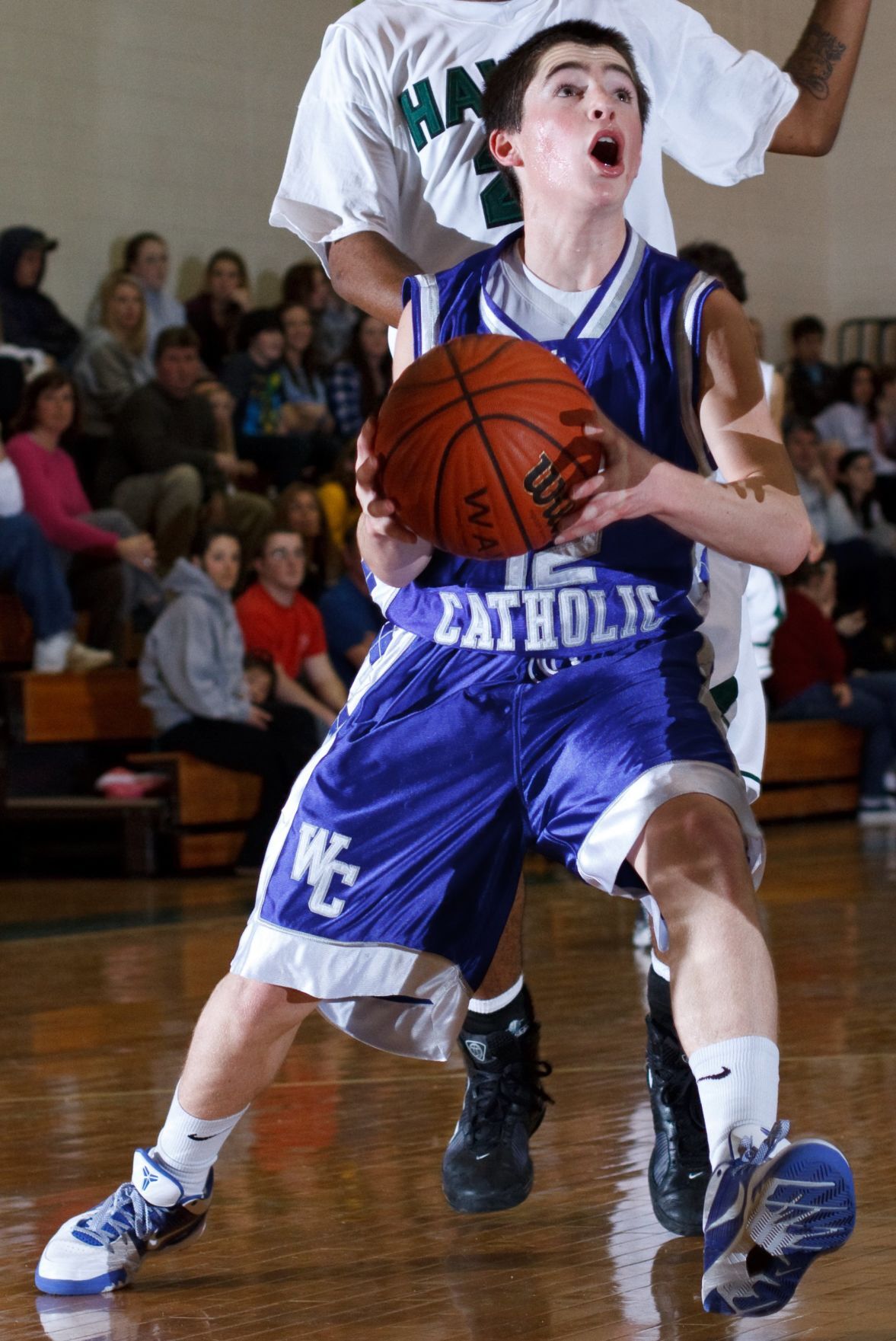 Wildwood Catholic's T-John Casiello sets up for a layup during the second quarter at Cape May Tech on Wednesday, Feb. 24, 2010 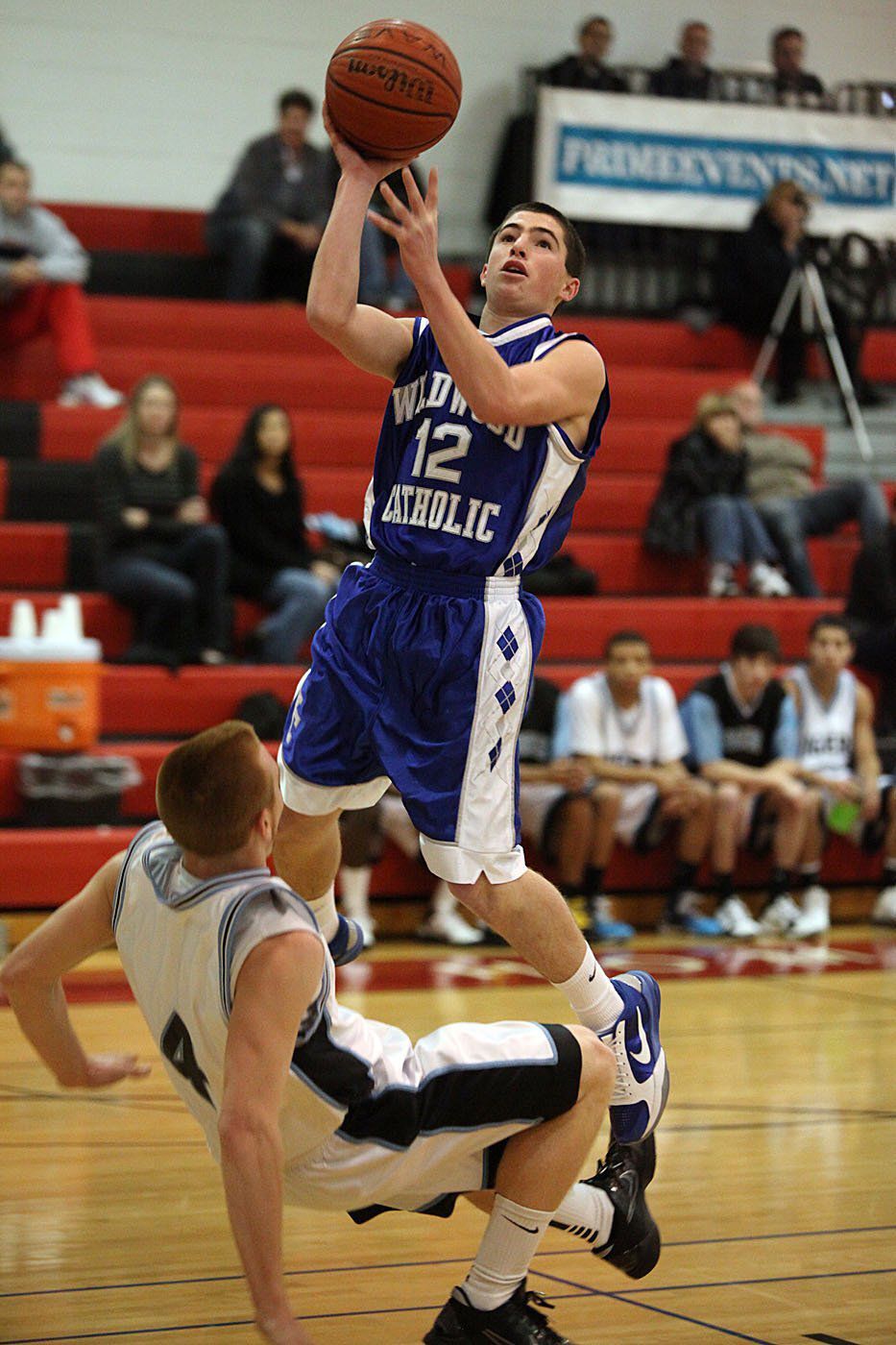 Bobby O’Donnell #4 of Lower Cape May goes to the floor as T. John Casiello #12 of Wildwood Catholic takes a shot in the first quarter of their Ocean City BPA Tipoff Weekend game at Ocean City High School, Saturday, Dec. 18, 2010 in Ocean City.

It all started overseas.

After having a successful basketball career at University of the Sciences in Philadelphia, where he graduated in 2016, T-John Casiello landed a position with the Sport Changes Life-Rory McIlroy Foundation in Northern Ireland, training and developing young hoops players.

The 2012 Wildwood Catholic High School (now Academy) graduate would run camps and clinics, conduct individual sessions and coach teams, in addition to playing professionally with the LYIT Donegal of the Ireland National League and studying for his master’s degree at Letterkenny Institute of Technology in Ireland.

Casiello also coached and trained athletes in Spain in 2017 when competing with the CB Estudiantes in Spain’s National Division.

Those experiences allowed him to develop a strong passion for mentoring and improving athletes at every level, which led to his own developmental program, Casiello Basketball based in Cape May County.

“I love the game, and I feel like I have the knowledge. I’ve been around the world, I’ve seen basketball at all different levels and in all different countries,” said Casiello, 26, of Wildwood Crest. “I had great, great coaches, so it’s my opportunity and my turn to pass that knowledge back on.”

Casiello trains about 850-plus athletes of all ages, with a majority from Cape May and Atlantic counties. He runs private training sessions and group workouts and conducts a summer camp, which draws athletes from Pennsylvania and New York.

The camps are usually held in different locations during the summer, including Cape May, Wildwood and Wildwood Crest. Casiello plans to have additional camps this summer in Avalon and Sea Isle City.

Casiello is training different players almost 12 hours a day. But he enjoys every minute of it, preaching to his players that basketball can do many positive things.

Casiello added the pandemic has taught him his sessions are more than developing skills on the court but also a way for kids to enhance social and communication skills. Casiello heard from many parents that his program helped players escape the recent problems in the world.

“In this situation, basketball is saving kids from depression,” Casiello said.

Casiello plans to start a league in the coming weeks for the middle school-aged players who are in his program. Many middle schools canceled their basketball seasons due to the COVID-19 pandemic.

“We have an unbelievable basketball culture down here,” said Casiello, who noted he is following all the CDC guidelines to ensure the players’ safety. “I think there is so much more we can do. I am trying to bring new life to basketball and actually put an emphasis on developing the players.”

Wildwood Catholic coach Dave DeWeese, who coached Casiello, called him an outstanding person and intelligent entrepreneur, having assisted with the program even after graduating high school and using his love of the sport to start a successful business.

“T-John has endeared many young players in the area to his style and personality and really has done a great job working with them and improving their basketball skill, knowledge and their passion for basketball,” DeWeese said.

“His passion for the sport is very contagious, it comes right out of him as soon as you are around him, and that passion has, obviously, flowed over to many of these young boys and girls who work with him on a regular basis.”

DeWeese noticed Casiello had the presence and qualities of a coach when the standout played point guard for the Crusaders, calling his former player “my coach on the floor.”

Casiello was a 1,000-point scorer for his career at Wildwood Catholic.

“Down here, in very southern South Jersey, there aren’t very many opportunities for kids to have somebody like him to work with them and to improve their game,” DeWeese said. “He has filled a big void down here by providing that to all the youth of Cape May County. He takes them all under his wing and does a great job training and mentoring them.”

The Princeton men’s basketball team even trained with him in September. Jordan Robertson, who played basketball with Casiello at Wildwood Catholic, helps with the training program.

“I want to show people that I’m not coaching, I’m training,” Casiello said. “There is a difference. ... I hope they will reflect on this as a great experience and maybe one day pass that knowledge on.”

The delayed, shortened and then further abbreviated Stockton University basketball seasons will continue this week in their conference tournaments.

Embiid scores 42, but Sixers lose in OT at home to Cavaliers

PHILADELPHIA — “Preparation, Process, Parade” is a mantra Doc Rivers has the 76ers focusing on this season.

PHILADELPHIA — Shake Milton shook off a defender with a crossover that sent the 76ers into a frenzy, and Furkan Korkmaz buried 3-pointers that…

Aggies reach best-ever ranking of No. 2 in women's AP Top 25

Texas A&M moved up to No. 2, its highest ranking ever in The Associated Press women’s college basketball poll, a day after winning its fir…

IRVING, Texas — The Big 12 has scheduled a dozen makeup games next week in the break the conference had left open for such games before the st…

Ohio State and Alabama competing for a national championship is hardly an unusual occurrence for either school.

Michigan leaps Baylor into second behind Gonzaga in Top 25

Nets head coach Steve Nash expects Kevin Durant (hamstring) to return to play before the March 7 All-Star Game in Atlanta, but is not putting any pressure on the star forward to come back before he’s ready.

Playing amid a pandemic has changed the NBA’s plans for this season’s All-Star Game.

Wildwood Catholic's T-John Casiello (12) takes a three point shots during the game at Cape May Tech on Wednesday, Feb. 24, 2010

Wildwood Catholic's T-John Casiello sets up for a layup during the second quarter at Cape May Tech on Wednesday, Feb. 24, 2010

Bobby O’Donnell #4 of Lower Cape May goes to the floor as T. John Casiello #12 of Wildwood Catholic takes a shot in the first quarter of their Ocean City BPA Tipoff Weekend game at Ocean City High School, Saturday, Dec. 18, 2010 in Ocean City.