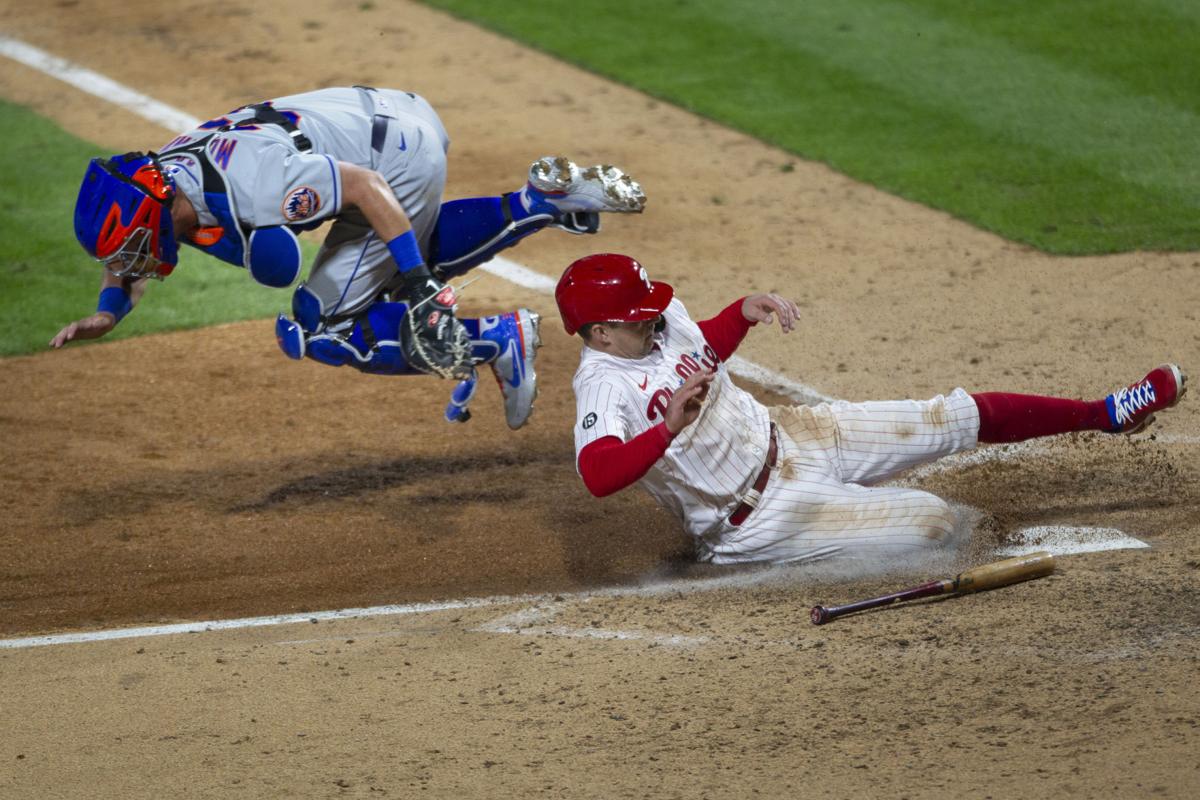 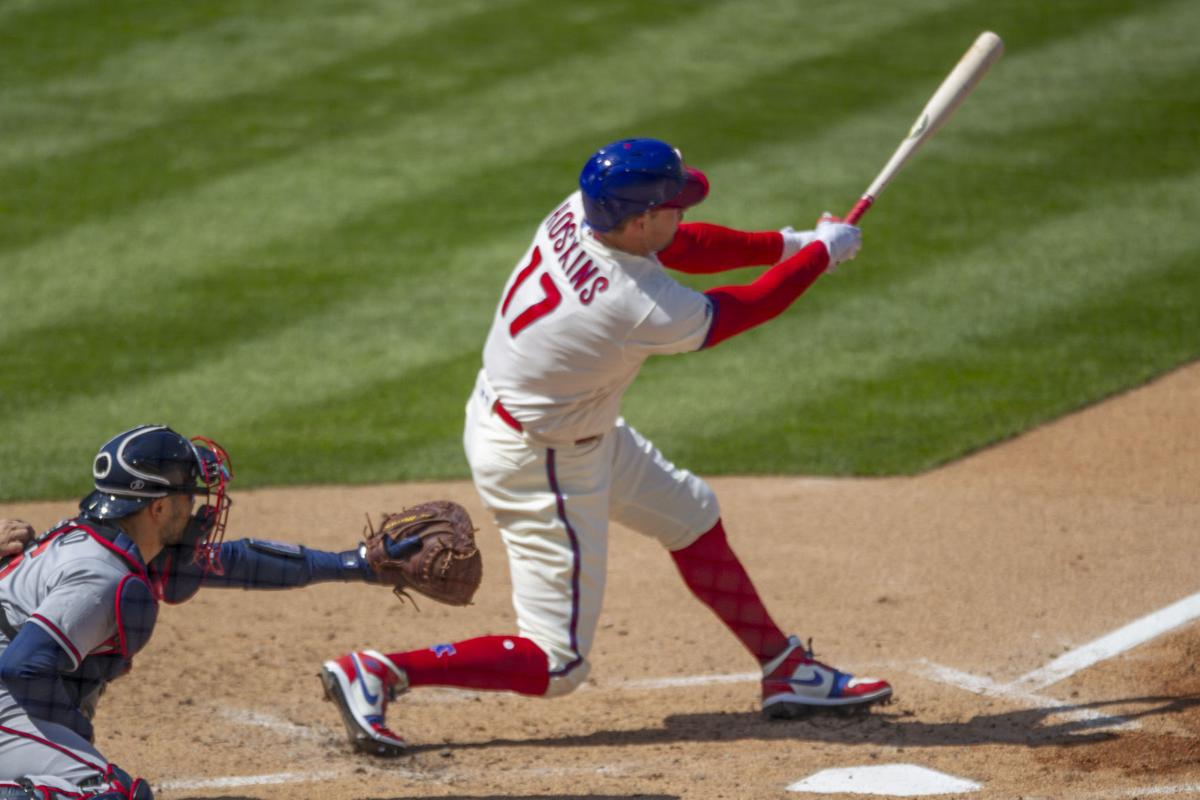 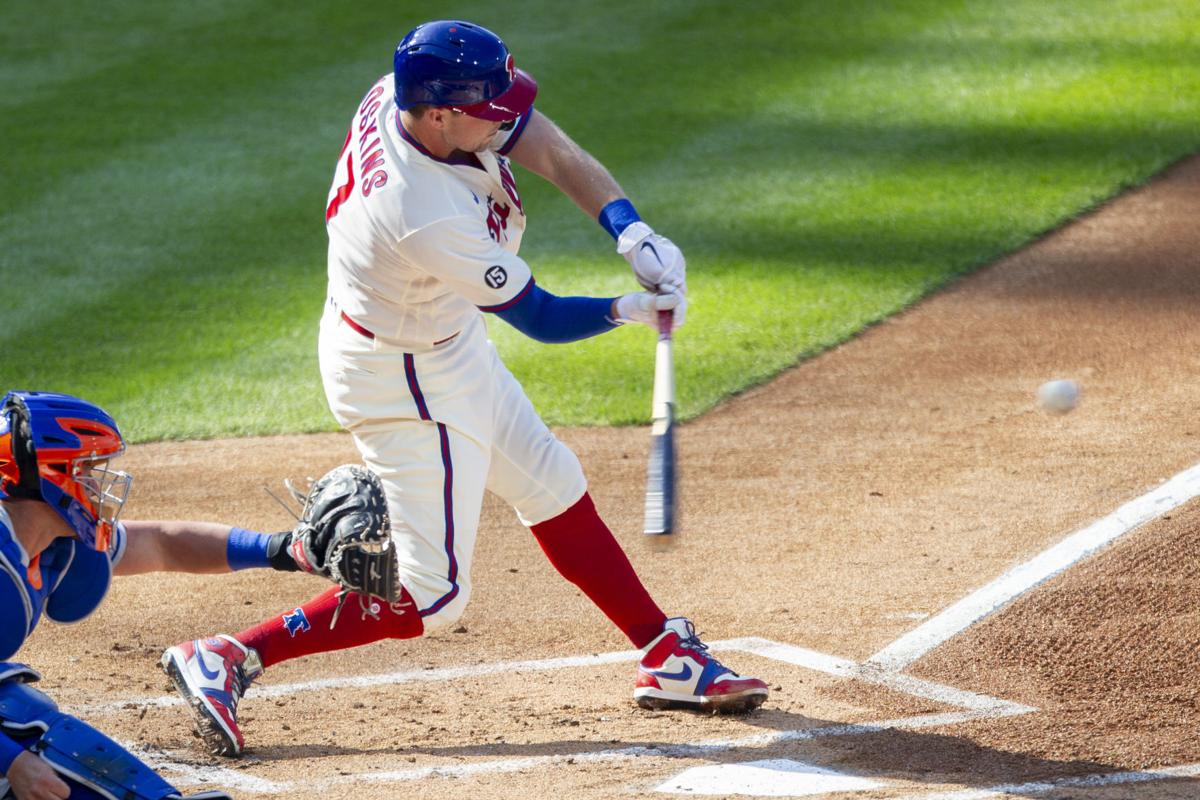 Rhys Hoskins homers for the Phillies against the Mets on Wednesday in Philadelphia. Entering Friday, his 92.1 mph exit velocity was the highest of his career. 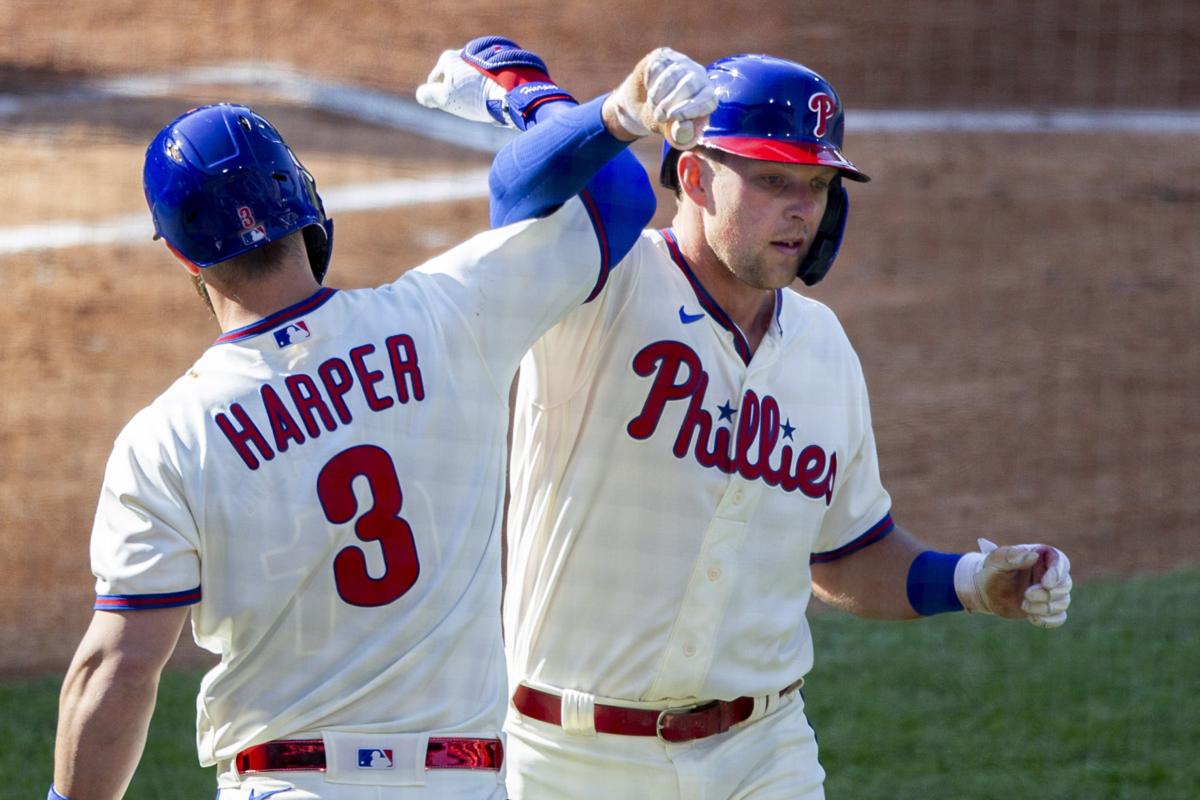 Philadelphia Phillies Rhys Hoskins, right, is congratulated by Bryce Harper (3) after he hit a home run during the first inning of a baseball game, Wednesday, April 7, 2021, in Philadelphia. (AP Photo/Laurence Kesterson)

Rhys Hoskins is known for his patience at the plate.

But the Philadelphia Phillies first baseman didn’t draw a walk in this season’s first six games.

“I’d rather be a hitter,” he said Friday.

That’s exactly what Hoskins has done so far. He began Friday with six doubles, a home run, a .417 batting average and a .417 on-base percentage. The Phillies (5-1) started a seven-game road trip in Atlanta against the Braves on Friday night.

Hoskins said he felt things begin to click the last week of spring training. The average exit velocity on the 18 balls he’s hit this season is 92.1 mph, the highest mark of his career and up from 89.8 mph last season.

“I think the consistent hard contact has been most impressive to me,” manager Joe Girardi said Friday. “It seems like every ball he’s hitting is a rocket.”

Hoskins has had his share of success and troubles at the plate since making his big league debut in August 2017. He hit 18 home runs in his first 50 games.

Much has been made in the past of swing changes Hoskins has made.

“I’ve become a lot more aware of what I’m trying to do in my swing,” Hoskins said. “What happens when it goes wrong? I can usually pinpoint within an at-bat or within a game. I can think back in my head and (say), ‘OK, that’s where I went wrong. This is the solution that’s worked in the past.’ The swing hasn’t changed a whole lot. The swing is still the swing. I just have a little bit more room for error now.”

Hoskins didn’t spend much time working on his swing this offseason. He spent most of the winter rehabilitating an elbow injury that ended his 2020 season and required surgery. The injury occurred when he tried to tag Miami Marlins runner Corey Dickerson during a Sept. 12 game.

“This is a guy who had to work his tail end off during the offseason just to be ready to play,” Girardi said. “I wasn’t sure how much work he got in offensively compared to a normal offseason because you’re focusing so much on his rehab. I love the production we’re getting from him. That’s what we were getting last year before he got hurt, and you just hope it continues.”

The Philadelphia Phillies began spring training in search of a centerfielder.

Rhys Hoskins homers for the Phillies against the Mets on Wednesday in Philadelphia. Entering Friday, his 92.1 mph exit velocity was the highest of his career.

Philadelphia Phillies Rhys Hoskins, right, is congratulated by Bryce Harper (3) after he hit a home run during the first inning of a baseball game, Wednesday, April 7, 2021, in Philadelphia. (AP Photo/Laurence Kesterson)