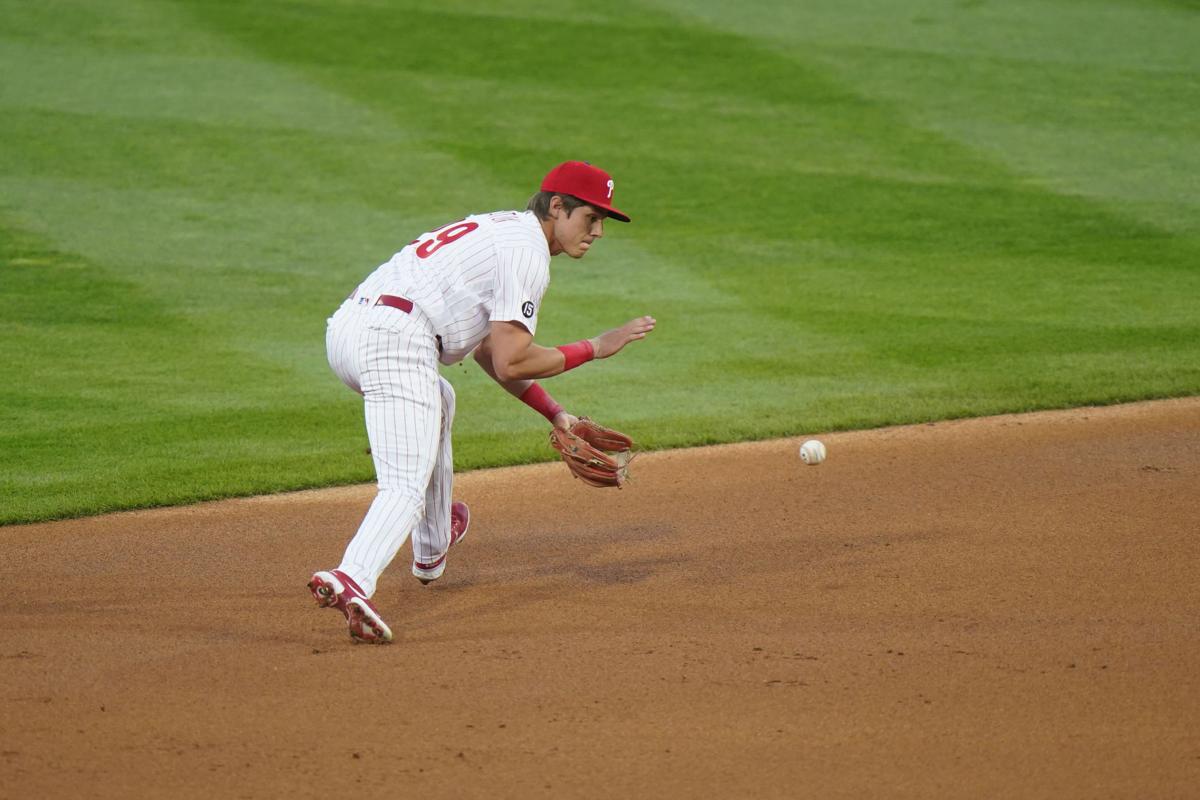 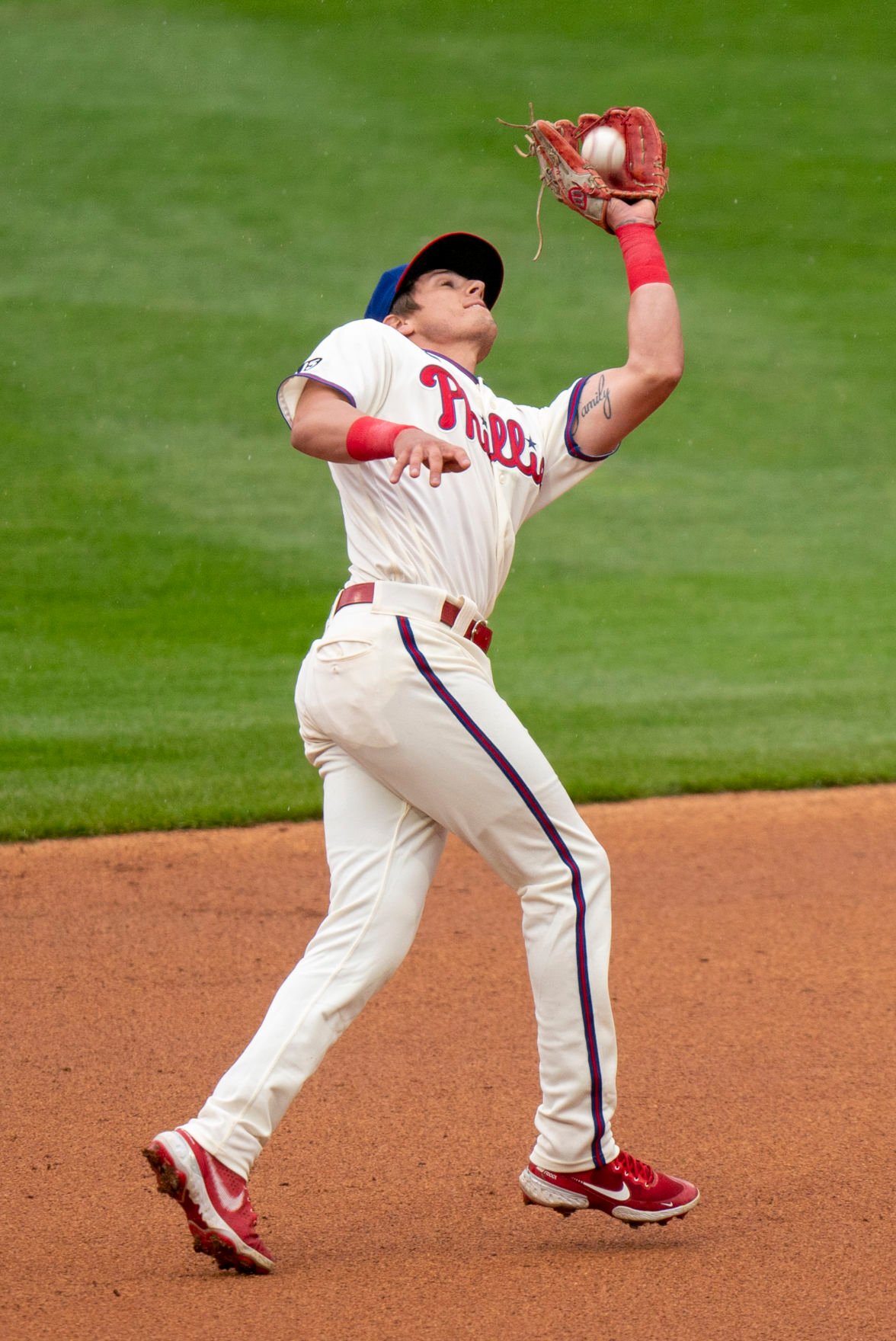 Philadelphia Phillies shortstop Nick Maton in action during the fourth inning of a baseball game against the San Francisco Giants, Wednesday, April 21, 2021, in Philadelphia. The Phillies won 6-5. (AP Photo/Chris Szagola) 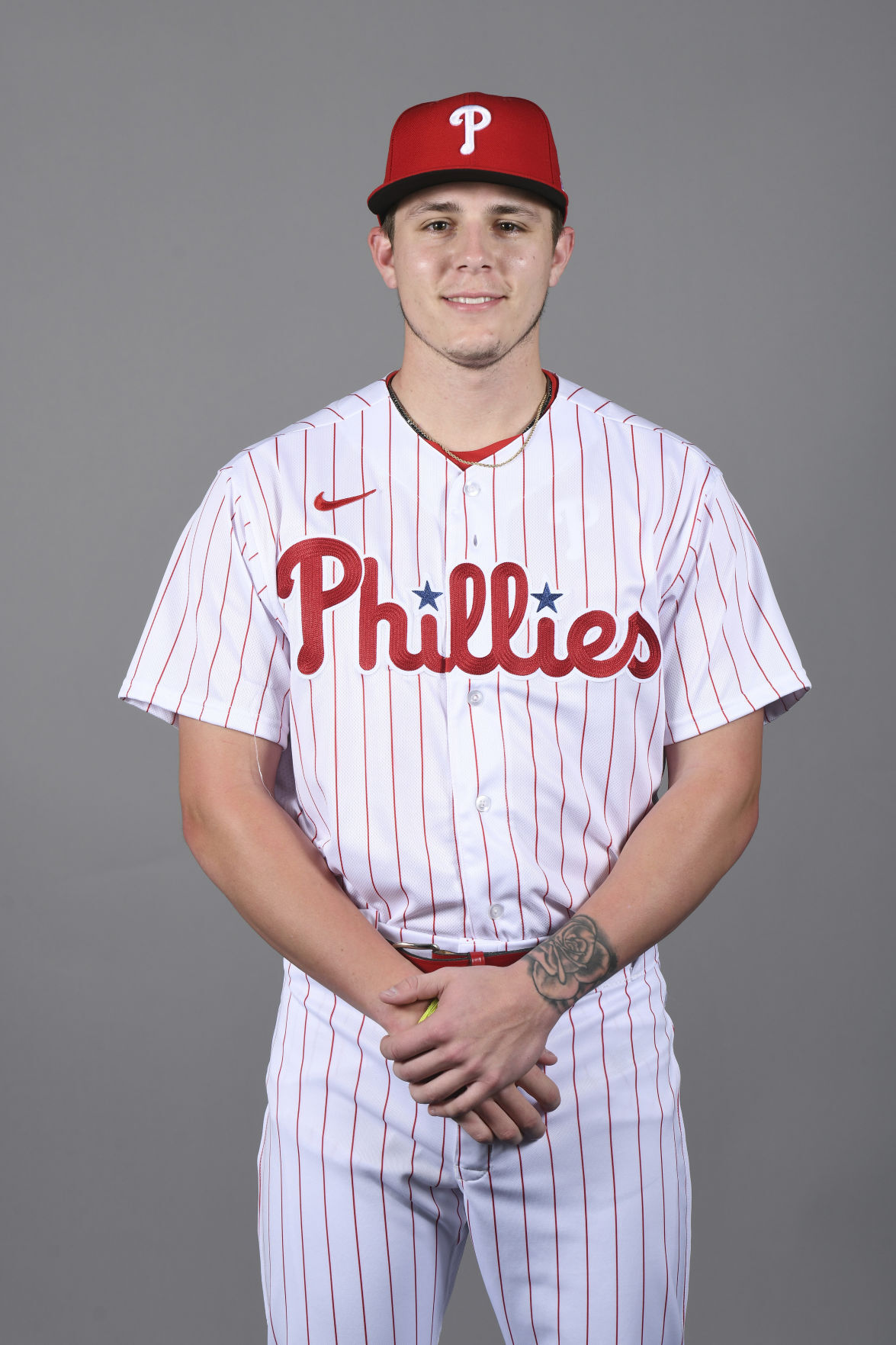 Nick Maton had yet to reach the major leagues — or even triple A — when he started each morning during spring training taking ground balls with Larry Bowa.

The half-field at the Carpenter Complex is Bowa’s Florida oasis, the spot where the legendary Phillies shortstop spends his springs slapping grounders at the next crop of infielders.

And Bowa — a fiery player during his 16-year career — loves to chirp, too.

Maton went 0 for 3 in that Grapefruit League game, losing his bet with Bowa. The next morning, the 24-year-old Maton was waiting to even things up with the 75-year-old Bowa.

Bowa took a liking to Maton, whom the Phillies drafted in 2017, ever since he saw him play two years ago in the minors. The kid crushed fastballs, Bowa said, and held his own at shortstop. But it was his attitude — the one Maton showed this spring on the half-field — that Bowa liked best.

“It’s totally unfair, but he reminds me a little of Chase,” said Bowa, who was Chase Utley’s first manager in the majors. “Putting his nose in the dirt and saying, ‘Let’s go.’ I’m not putting that pressure on him, but attitude-wise and confident, he reminds me a lot of him. Personality-wise. He gets after it, man. He’s not afraid to work. I’m not comparing him to Chase because Chase is a great player, but they remind me a lot of each other.”

The Phillies will give Maton a chance at regular playing time while Jean Segura nurses a strained quadriceps. The injury will keep Segura out for at least 10 days and Maton should get most of the reps at second base. He is versatile enough to handle any infield position and could even play the outfield in a pinch. Maton said he’ll play wherever Joe Girardi needs him.

Maton reached the majors Monday and started three straight games at shortstop while Didi Gregorius was sidelined with a sore elbow. He held his own, made a few nice defensive plays and had five hits.

Girardi said the game didn’t speed up on Maton. The rookie looked like he belonged. The Phillies don’t need Maton to be Utley, they just need him to fill in.

“He’s not intimated whatsoever,” said Bowa, a senior adviser to the general manager and a special assistant during spring training. “He could care less who’s pitching against him. I don’t think he’s in awe. I think he knows he can play in the big leagues. He just has that kind of personality where he’s not afraid.”

Maton’s 12 major-league at-bats are 12 more than he had at triple A, a level he never reached. He hit .276 over 93 games in 2019 with high-A Clearwater, which is where Bowa first spotted him. But Maton hit just .210 in 21 games later that year after being promoted to double A. Maton struggled at Reading, his highest minor-league level.

“I said, ‘Man, you didn’t do anything at Reading.’ Kidding around with him,” Bowa said. “He goes, ‘I played with a broken finger.’ I said, ‘What?’ He said he didn’t want to tell anyone because they called him up. I asked Reading manager Shawn Williams and he said he did. He just didn’t tell anybody. This kid likes to play.”

Oakland drafted Maton out of high school in 2015, but he decided to play at Eastern Illinois University. He was named to the conference’s all-freshman team but transferred after the season to a junior college 5 miles from his hometown.

The mindset that Bowa saw in Clearwater, Florida, was evident at Lincoln Land, a school in Springfield, Illinois, that has produced a handful of major leaguers. Maton hit .408 with a 1.229 OPS that season, but it was the way he worked that still sticks with Loggers head coach Ron Riggle.

”His hard work and his dedication is just infectious,” Riggle said. “This is my 31st year of coaching junior-college baseball, and I’ve always said when your best player is your hardest worker, that benefits your entire team. He certainly had that effect on our team.”

Riggle said Maton had “extremely high” expectations for both himself and his teammates. He remembered a practice when the catchers were working on throwing to second base and Maton dropped the ball.

”But they had short-hopped like the five before that,” Riggle said. “Someone said something to him about catching the ball and he said, ‘Well, why don’t you throw the ball to me every time?’ That type of expectation level out of himself and his teammates. When your best player expects so much out of himself and works really hard, it just makes the other people who are on the fence understand that this is what I’m supposed to do.”

The Phillies drafted Maton in June 2016 in the seventh round, making him the second member of his family to be drafted. His older brother Phil is a pitcher with Cleveland and his younger brother Jacob was drafted in 2019 by Seattle but is playing now at Coastal Carolina.

Maton’s minor-league climb likely would have reached triple A last summer, but the season was canceled by the coronavirus pandemic. So he spent two months at the alternate site in Allentown as a left-handed hitter for the left-handed pitchers to practice against before they returned to the majors. For Maton, it was like being in triple A.

Perhaps it was enough experience for Maton to look comfortable earlier this week when he reached the majors. The Phillies told him Monday afternoon that he was headed to the big leagues. He drove himself from Allentown to South Philly. It was a quick ride, Maton said.

And waiting for him in the clubhouse was a text message from Jayson Werth, who graduated from Glenwood High in Chatham, Illinois, 18 years before Maton did. They never met, but Werth texted Bryce Harper to congratulate Maton and welcome him to the big leagues.

“That was pretty cool,” Maton said.

In his first big-league series, Maton didn’t look like a player whose minor-league career topped out at three weeks at double A with a broken finger. Just like he proved to Bowa as he took grounders in Clearwater, Maton looked like he belonged.

And now he’ll get a chance to stay around.

“He took me under his wing. I’ll tell you that much,” Maton said of Bowa. “A lot of reps every single day. Hundreds and hundreds of ground balls. He’s a good guy to have on your side. He helped me out a lot and taught me a lot. He’s still consistently working with me. ...The main thing he would say is to never take anything for granted. Always take everything like it’s your last. Never take any ground ball for granted. Just always get after it.”

The Philadelphia Phillies were four outs away Friday night from starting a weekend at Coors Field with a win.

Philadelphia Phillies shortstop Nick Maton in action during the fourth inning of a baseball game against the San Francisco Giants, Wednesday, April 21, 2021, in Philadelphia. The Phillies won 6-5. (AP Photo/Chris Szagola)