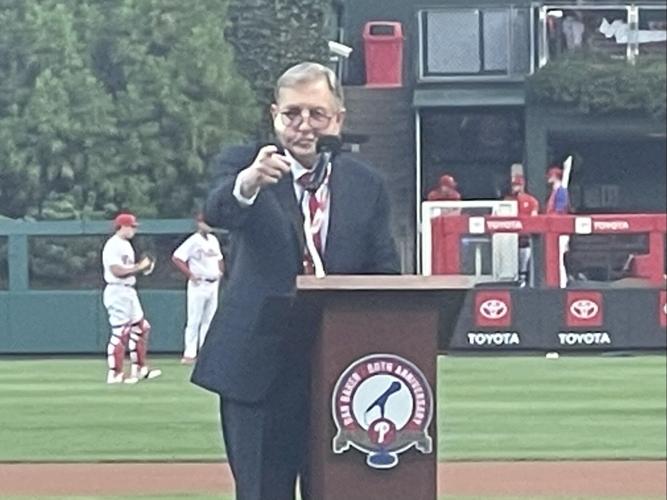 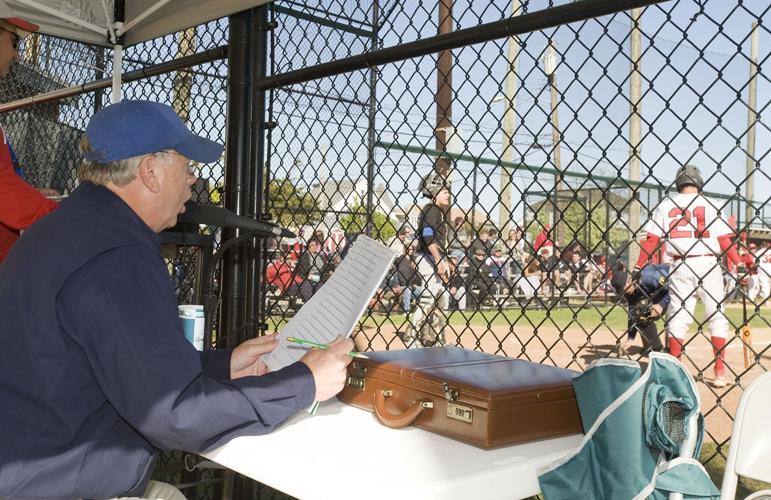 Baker’s voice is a big part of the Phillies’ game-day experience, but he’s also a living example of perseverance and the power of positive thinking.

Baker doesn’t want to burden fans or the Phillies, but he’s battled cancer the past few years. Few realize what he has endured to continue to keep coming to the ballpark.

Three weeks ago he was in the hospital for six days. He underwent back-to-back surgeries — one of which lasted 12.5 hours — to deal with an infection in his cheek. Under his blue suit jacket Friday, antibiotics still flowed into his body through a tube in his right arm.

“The Phillies have provided me with so much incentive,” Baker said after Friday’s ceremony. “I got to get back here. I have a job to perform. I can do some good for somebody. If you have a mission in life, it really helps to motivate. You can put aside any aches and pains or health issues.”

Baker started as the Phillies’ public address announcer in 1972. The first player he ever introduced was Phillies shortstop Larry Bowa. Baker is known for his enthusiastic pre-game presentations and unique way he pronounces words, phrases and names such as “the United States of America” while asking people to stand for the national anthem.

“Names that I enjoy saying the most are the polysyllabic words,” Baker said, “multiple syllables that lend themselves to a more melodic interpretation.”

During Friday’s ceremony, the Phillies presented Baker with a golden microphone and a No. 50 jersey signed by members of the Phillies Wall of Fame.

“I try to say hello to everybody,” Baker told the crowd. “I’m so happy to be here. Why not? I’m a Phillies fan.”

“I’m so appreciative,” Baker said. “I don’t know that the PA announcer deserves that kind of attention. He doesn’t or she doesn’t impact the game nearly as much as the players and manager, coaches, front office. But I’ll tell you one thing, I’m not going to turn it down and I just wanted to say thank you to the Phillies for being kind enough to recognize me.”

Baker is currently the longest tenured public address announced in the big leagues.

“To do something for 50 years in sports in this town,” former Saint Joseph’s University men’s basketball coach and current Michigan assistant Phil Martelli said Friday. “I don’t want to be sacrilegious, but that’s sainthood. I think he wakes up every day with joy in his heart. A lot of us get up every day and we’re worried about the day that is ahead. He’s joyful about the day ahead. I’ve never been around someone whose eyes are so joyful.”

An example of Baker’s generosity happened in 2011 when he was the public address announcer for an Ocean City High School baseball game. Ocean City had a connection to the Phillies. The son of retired manager of Phillies video production department Dan Stephenson played for that Ocean City team.

Baker’s health issues began when he had a 5½-centimeter cancerous tumor removed from his right cheek nearly two years ago. He’s had numerous surgeries. There’s not hint of it in his voice.

Baker believes the record of major league public address announcers is 59 years set by Pat Pieper of the Chicago Cubs from 1916 to 1974.

Baker says as long as the Phillies will have him and he can continue to do the job at a high level he wants to stay. He says he’s lucky to have the job.

“I felt that my whole life,” he said. “This is almost like a fairy tale existence, and I’m still riding the horse.”

PHILADELPHIA — Matt Vierling says he and the Phillies simply made a choice Wednesday night.

PHILADELPHIA — Zach Eflin is what a baseball team chasing its first postseason berth in 11 years needs most in late September:

PHILADELPHIA — The Phillies and their fans need to belt out a chorus of “Meet the Mets.”

How soon before fast-moving Andrew Painter joins the Phillies' rotation?

PHILADELPHIA — It’s been a whirlwind 16 months for Andrew Painter.

PHILADELPHIA — To celebrate the regular season home finale, Phillies outfielder Kyle Schwarber grabbed a microphone and spoke to the 32,090 fa…

Rob Thomson as cool as ever as Phillies begin critical homestand

PHILADELPHIA — Rob Thomson looked like anything but the manager of a team on a four-game losing streak Tuesday afternoon.

Highlights of Mainland’s win over Hammonton

Highlights of Mainland’s win over Hammonton

Who can afford to buy the Phoenix Suns?

Who can afford to buy the Phoenix Suns?